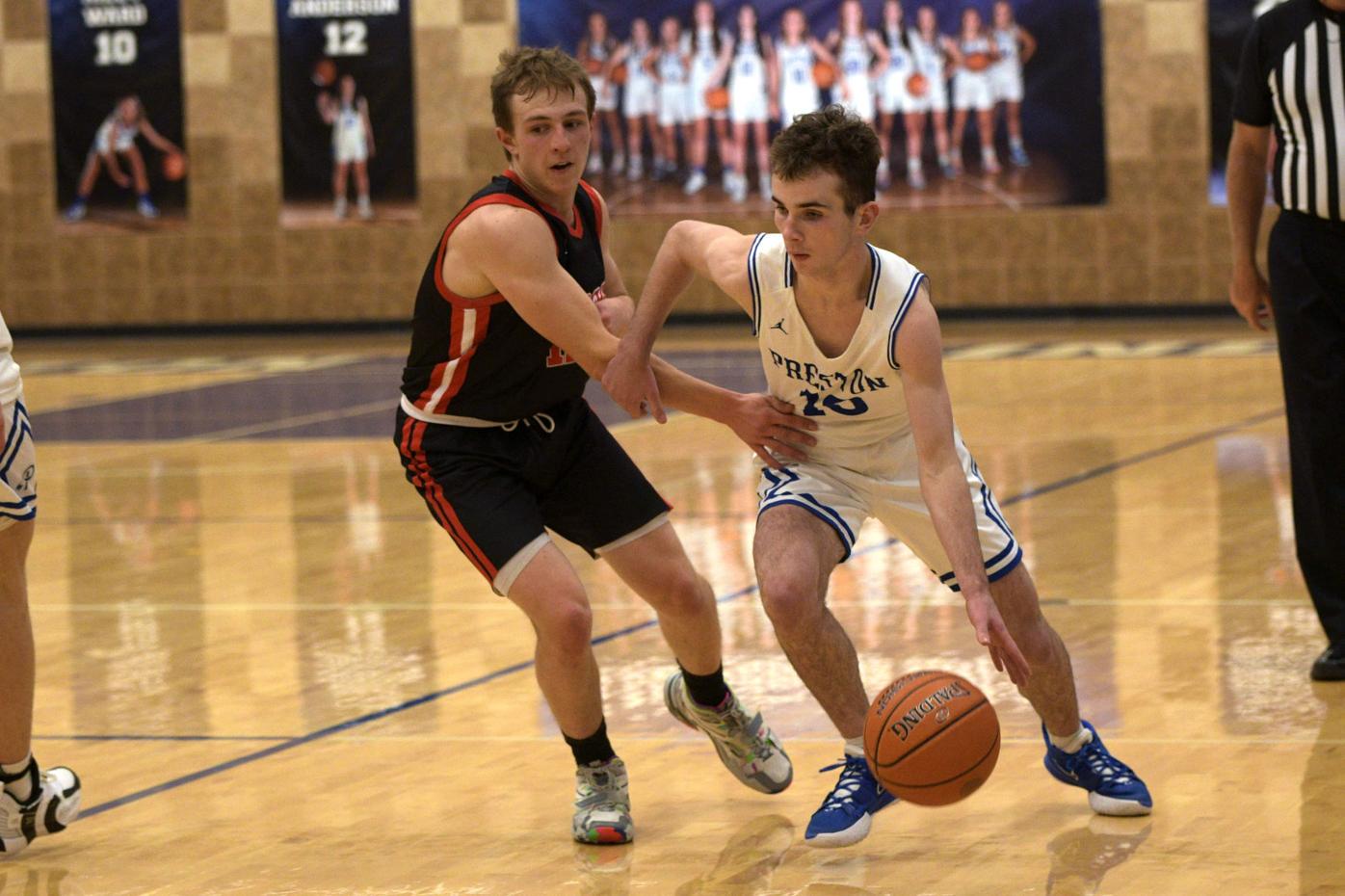 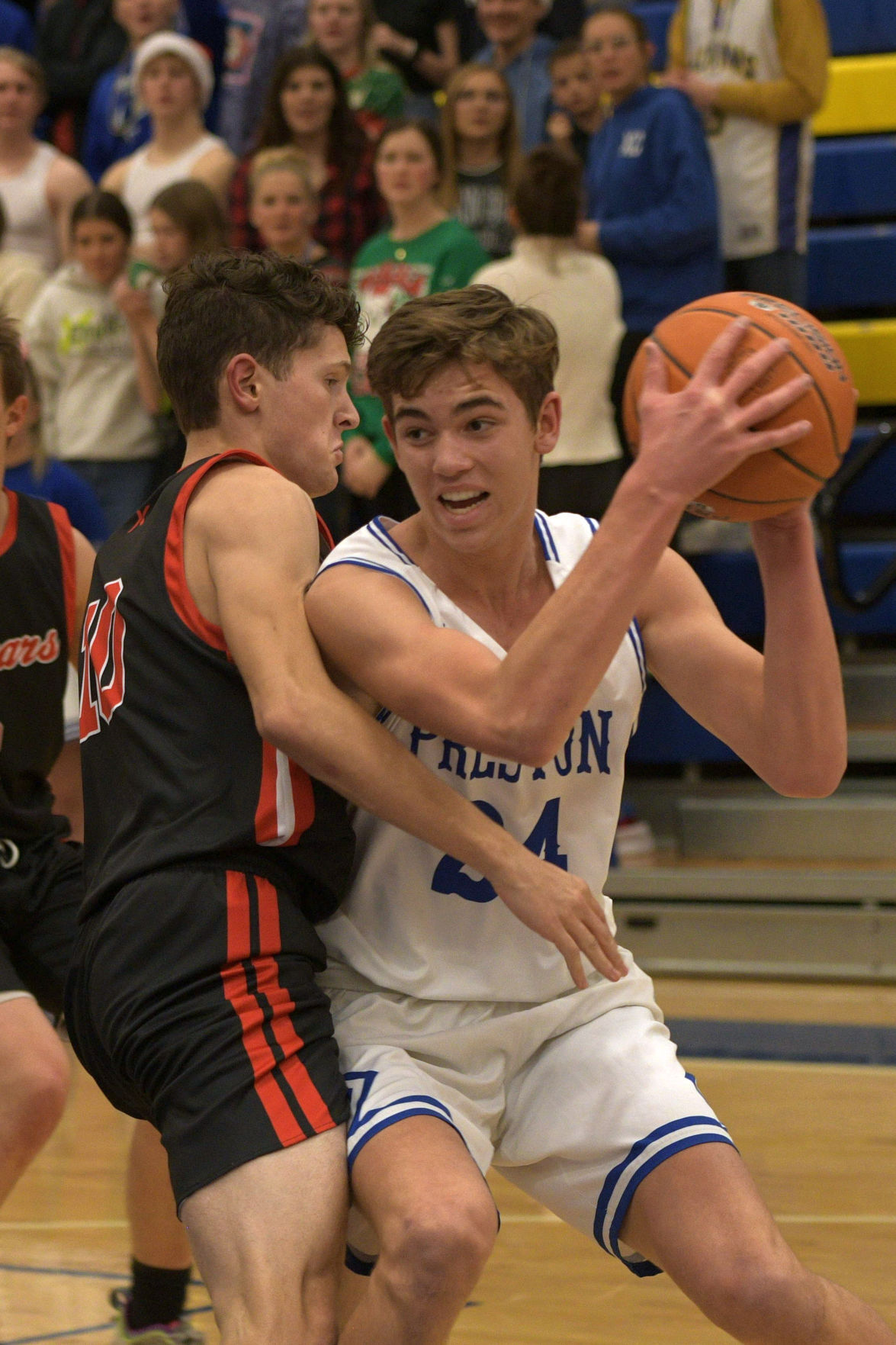 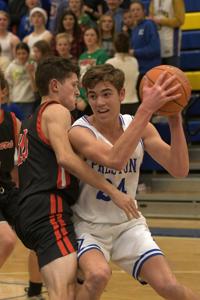 PRESTON – About the only thing missing for the Preston boys basketball fans Thursday night was free french fries.

The students begged for them, chanted and pleaded up until the final seconds ticked off. No dice.

However, there was plenty to cheer about as the hosts opened their annual Preston Indian Classic Basketball Tournament with a blowout win against overmatched South Fremont. Ranked No. 1 in 4A in Idaho, the Indians scored the first nine points of the game and cruised to a 74-23 victory.

“This tournament is so fun,” said Will Hamblin, who came off the bench to score a game-high 17 points. “We always look forward to it every year. We are excited.”

With a running clock – in Idaho if a team is up 30 points in the fourth quarter, the clock rolls continuously – Preston was patient and worked the ball around, looking for layups. The Indians (6-0) scored two buckets to hold a 74-19 lead with just over four minutes to play. The magic number is 75 for free fries.

There would be no 75th point.

South Fremont (3-4) guarded the Indians, but they passed, dribbled and never attacked the rim. There was no field goal attempt by the hosts over the final four minutes. Even in the closing seconds with the students pleading, the disciplined Indians did not give in.

“I wanted the kids to work on some different defenses and move the ball around on offense,” said Preston head coach Tyler Jones, who joked with some students after being interviewed as they quizzed him on not letting the team score in the final minutes. “We didn’t want to get in any bad habits. … I know we were close to 75.”

“Coach told us to run through the offense and not let the crowd or anything around you get in the way,” Hamblin said. “We kept focusing and running through the plays and being sharp.”

Nine of the 10 Preston players that saw action scored. The starters sat a large chunk of the second half. The reserves combined for 36 points.

“It was a good team win and we got a lot of kids some experience,” Jones said. Hopefully, we can build on this.”

Joining Hamblin in double-digit scoring was Cam Hobbs with 16 points. Tate Hess came off the bench and scored all nine of his points in the second half. Brecker Knapp and Kade Lords added eight points each. Druw Jones had seven of his eight assists in the first half.

After missing four of their first five shots to start the game, the Indians heated up. They scored the first nine points of the contest and held a 24-7 lead at the conclusion of the first quarter as six different players scored.

“I thought our energy was really good as we came out pushing the ball and really running and got some easy baskets,” coach Jones said. “I thought our defense led to some easy run outs.”

Preston scored the final six points of the opening quarter and kept the momentum going into the third by scoring the first eight points to build a 32-7 lead. Hamblin capped the run with a 3-pointer from NBA range. He would sink two more from way out later in the second.

“I’ve always practiced deeper 3-pointers,” Hamblin said. “I just let it fly. As long as it’s in the offense and you need to remember to be a team player, but I’m good at shooting out there.”

South Fremont scored their only points of the second on back-to-back buckets about 50 seconds apart. If there was any doubt in the outcome, Preston then seized complete control.

The Indians scored the final 21 points of the second quarter over a time span of 5:16 minutes as Hamblin had eight points. The hosts took a 53-11 lead into the break.

“He (Hamblin) can really shoot it,” coach Jones said. “When he is hitting, he can really light it up in a hurry.”

The Cougars scored first in the third, but then Preston reeled off 15 unanswered to build a 68-13 lead. Hess had seven points during that run for the Tribe.

It was 70-17 heading to the final quarter. Free fries were so close. Perhaps another time.

In other action on the first day of the three-day tournament, Jerome beat Nampa, 62-47, Kuna topped previously unbeaten Shelley, and Columbia picked up a win against Bonneville. Preston will take on Columbia in one of the semifinals Friday night at 8.

“There should be some good games tomorrow in the semifinals,” Jones said. “We are looking forward to that.”

In other action Thursday night, West Side was at a tournament in Boise and beat Castleford, 42-28. Ridgeline was playing in St. George and lost to Westlake, 76-64. Logan was also down south and lost to Dixie, 52-36.

The Pirates (3-2) scored 25 points in the first half and had 38 heading to the final quarter against the Wolves (4-3), but could muster just six points over the final eight minutes.

“Thought we played hard, but not very smart at times,” WS head coach Tyler Brown said. “We need to get in shape. We will have to play a lot better tomorrow.”

Bryler Shurtliff led the Pirates with 16 points, including a pair of 3-pointers. Ryker Love added eight points, and Parker Henderson chipped in seven.

At Pine View High School, the Riverhawks (5-3) had their five-game winning streak snapped. The Thunder (5-3) narrowly outscored Ridgeline in every quarter.

The Grizzlies (4-2) also got outscored in every quarter. The Flyers (6-1) built a 26-16 lead at halftime and never looked back.

The six programs from Region 11 are hosting five teams from Region 10, plus Preston, at the three-day North vs. South tournament, which started Thursday. Green Canyon, Preston and Ridgeline won comfortably on Day 1.

Green Canyon (4-3) outscored Dixie (2-3) 22-9 in the third quarter to turn a nailbiter into a 68-55 victory. Maren McKenna had another big game for the Wolves, who had nine different players finish in the scoring column. McKenna contributed with 23 points, 11 rebounds, four steals and three assists, while Cambree Tensmeyer and Brooke Monson chipped in with 16 points apiece.

"We are really proud of our girls and the way they played tonight," GC head coach Alexis Bird said. "The first half was a little sloppy, but we were able to make adjustments at halftime and the team executed extremely well."

Preston (7-2) completely stymied host Bear River (1-5) after halftime in its way to a 56-24 win. Additionally, the Indians outscored the Bears by 27 points during the final 24 minutes of action. Riley Ward led Preston with 16 points, followed by Mickayla Robertson with 14 and Amber Anderson and Jadely Roberts with nine each.

"The girls looked sharp tonight," PHS head coach Ryan Harris said. "I felt like we let them score too many in the first half and we challenged (our girls) to pick it up on the defensive end in the second (half), and they did a nice job holding them to six points over the last two quarters. ... Roberts gave us a nice game with nine points in her first varsity minutes of the season."

Ridgeline (8-0) raced out to a 15-5 lead over Pine View (3-3) and never looked back in a 53-29 triumph. The Riverhawks beat the Panthers by 10 or 11 points in the three of the quarters. Emilee Skinner filled up the stat sheets with 22 points, eight boards, five assists and four steals for Ridgeline, which got 14 points from Elise Livingston.

"I'm proud of the girls for playing another game of intense defense," RHS head coach Ainsli Jenks said. "It was a good team win, with contributions offensive and defensively from lots of girls."

Desert Hills trailed Sky View 18-13 at halftime, but took a two-point lead into the fourth quarter and held on. The Bobcats aided the Thunder's cause by missing half of their 18 free throws. Hannah Radford tallied 14 points for Sky View, while Melanie Hiatt added 13.

"Desert Hills is a tough team," SV head coach Vanessa Hall said. "I thought we played well defensively, especially in the first half. I thought our guards handled their pressure and took care of the ball. Our girls battled hard tonight. We came up short in the end, but these are the games during preseason that make us a better team moving forward."

Hurricane and Mountain Crest were tied at 18-18 at the half, but the Tigers won the third quarter by a 15-6 count en route to the win. Havyn Brown paced the Mustangs with 13 points, while Lexi Coggins chipped in with 11 --- nine courtesy of shots from 3-point range.

Logan was competitive with Snow Canyon in two of the quarters, but the visitors outscored the hosts by 26 points in the other two. Erika Rodriguez netted 14 points for the Grizzlies, followed by Gabby Hollingsworth with nine.