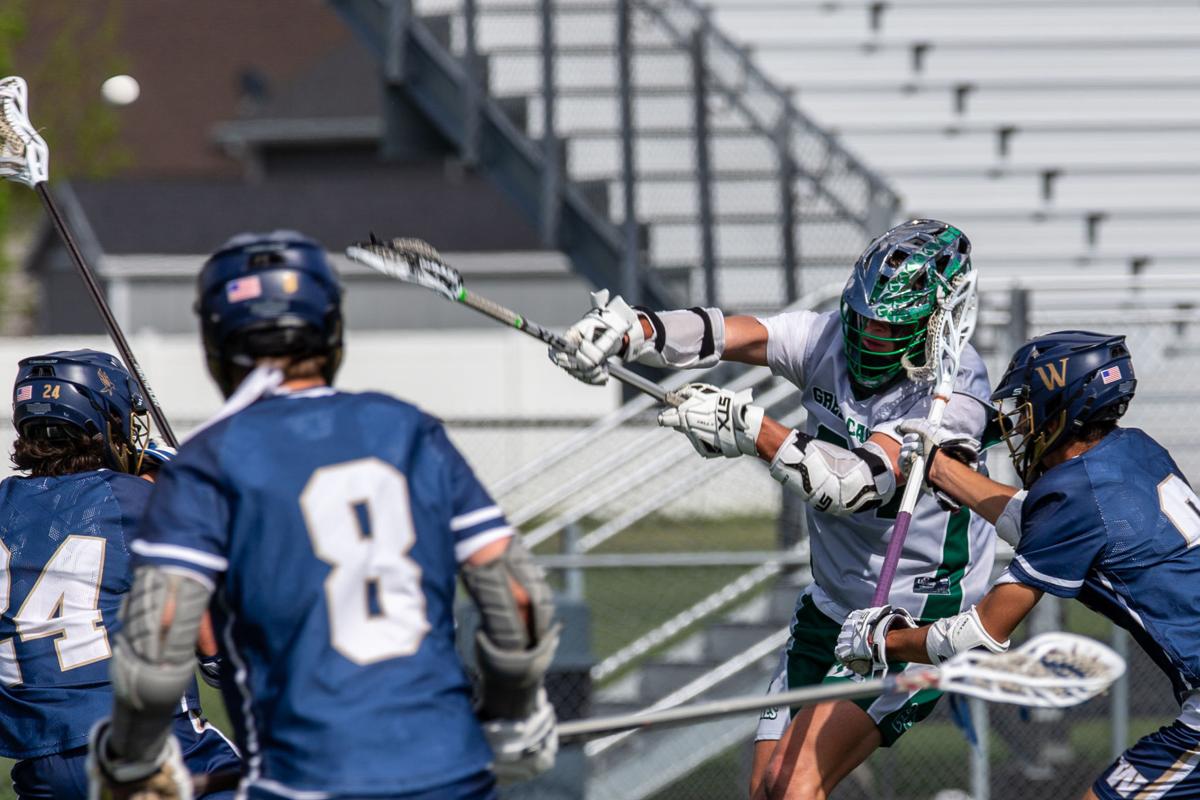 Green Canyon's Jake Lundin (24) shoots against Waterford in the first round of the Division A Boys Lacrosse Championships on Tuesday. The Wolves advanced in the state playoffs with a 24-16 win. 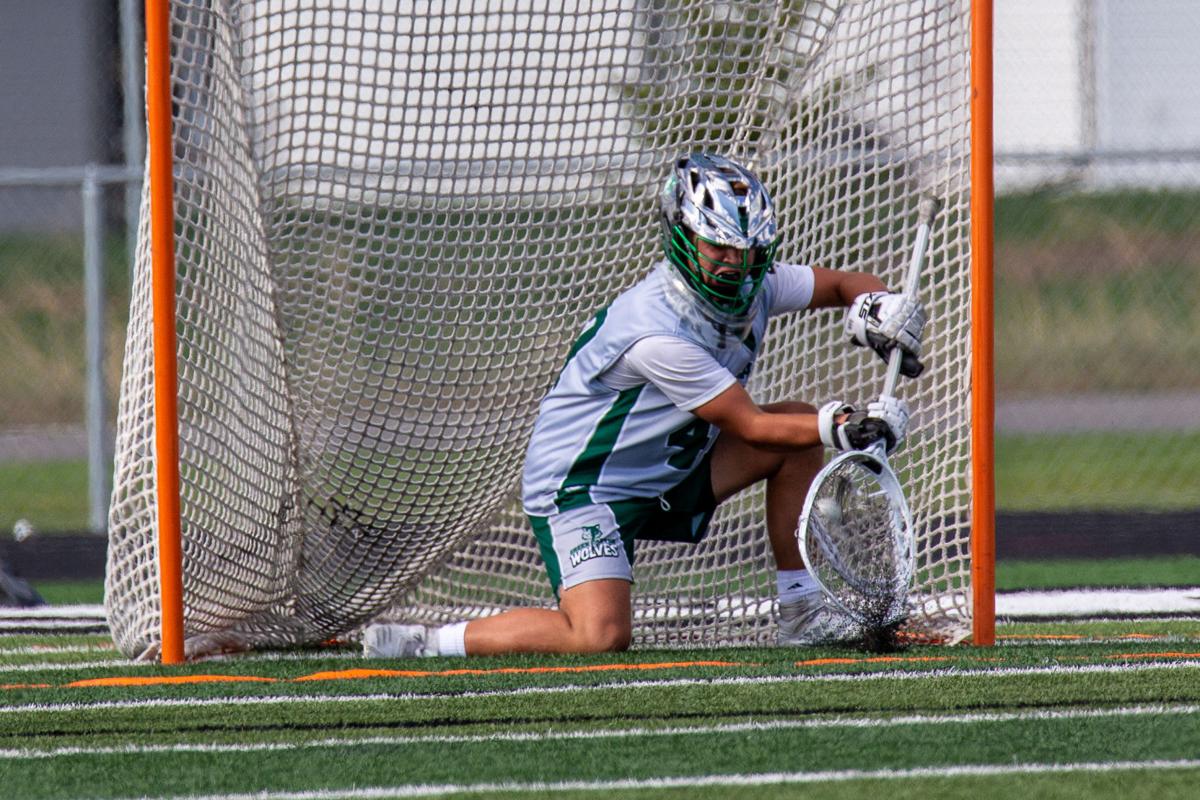 Green Canyon goalie Peyton Johnson makes a save against Waterford in the Division A Boys Lacrosse Championships on Tuesday in North Logan. 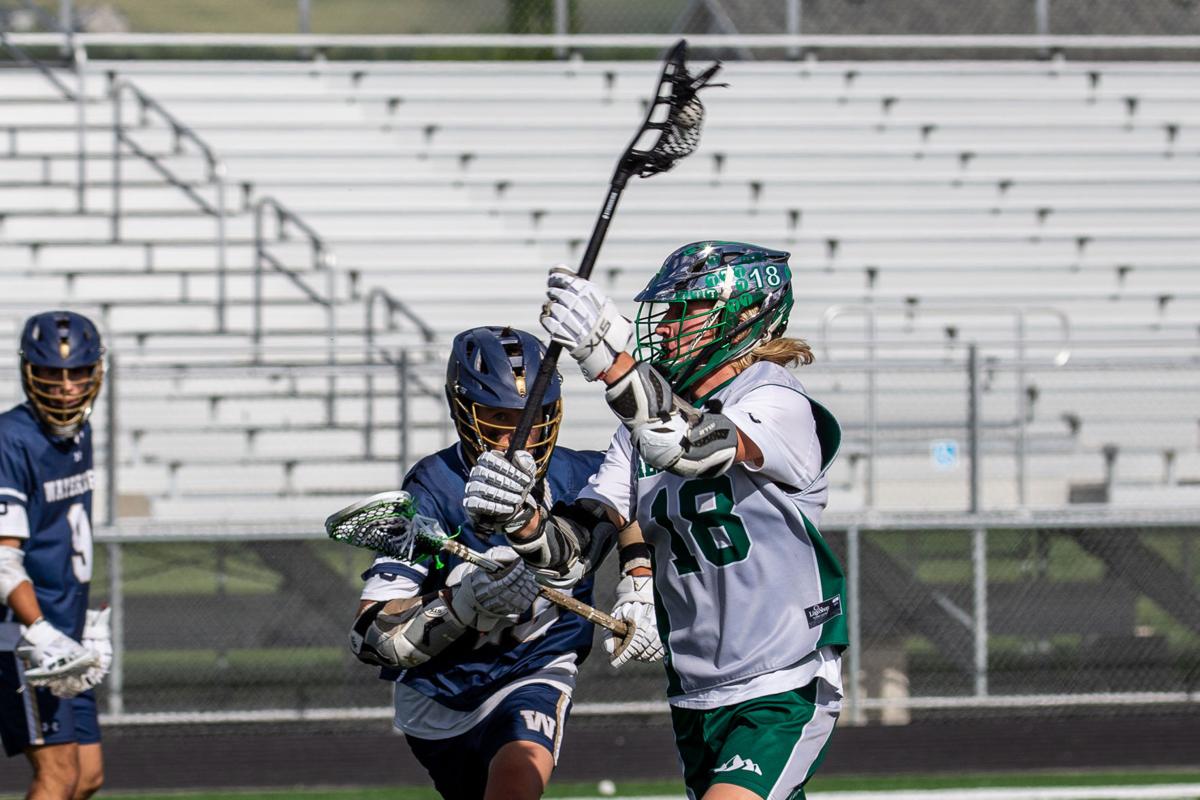 Green Canyon's Jake Lundin (24) shoots against Waterford in the first round of the Division A Boys Lacrosse Championships on Tuesday. The Wolves advanced in the state playoffs with a 24-16 win.

Green Canyon goalie Peyton Johnson makes a save against Waterford in the Division A Boys Lacrosse Championships on Tuesday in North Logan.

NORTH LOGAN — Knowing when to attack and when to be patient paid off big time for the Green Canyon boys lacrosse team Tuesday afternoon.

The Wolves took the lead for good midway through the first quarter, but used a big third period to pull away from visiting Waterford in the first round of the Division A Boys Lacrosse Championships. Green Canyon cruised to its 14th straight win, 24-16.

“It all starts with our face-off guys,” said Mason Anderson, who led the Wolves with five goals and three assists. “Without them, it’s hard for our offense to produce. Hats off to them (Jake Lundin and Laker Sampson). Once we get a head of steam, it’s really hard to cool that fire.”

“We knew this team was much better than we played them in March, and we knew it would be physical and they would come at us hard,” GC head coach Troy Oldham. “I thought it was a really good first quarter, so competitive.”

The Ravens won the opening face off and patiently took the ball down the field. Jack Meyer put the hosts to top less than a minute into the contest.

Waterford’s Spencer Reagan is one of top face-off athletes in the state and made the Wolves face-off ace Lundin concentrate extra hard. Lundin did win 10 of 24 face offs for the game, while Sampson won 6 of 19.

“We worked on some stuff and was able to slow him (Reagan) down,” Oldham said. “He is so quick, but we were able to get some of those ground balls. Jake (Lundin) is the best in our region, but we knew that would be tough today. Jake held his own and so did Laker.”

Dustin Gasaway tied the game, and Jaxon Curtis put the Wolves ahead at the 10:18 mark of the first quarter. Curtis’ goal came after Lundin won a face off, and Green Canyon attacked. The Wolves would not trail again, but the Ravens did tie it up at 2-2 at the 6:47 mark.

A minute later Gasaway scored his second goal to put Green Canyon ahead for good. Gasaway, a midfielder, finished with four goals and an assist.

Connor Dockerty scored in the closing minute to give the Wolves a 6-4 lead at the end of the first quarter.

Green Canyon scored two quick goals to begin the second quarter. Gasaway made it a hat trick and eight seconds later Anderson took a pass from Lundin after he won the face off and finished to make it 8-4.

“Mason is a solid guy on attack,” Oldham said. “Dustin Gasaway is so fast and explosive. He scores so quickly and is always working.”

The Ravens turned up the intensity as it got a lot more physical. Waterford scored three straight goals, including one with Green Canyon playing a man down because of a penalty. Avoiding penalties was a focus for the Wolves.

“You just have to keep your cool,” said Gasaway, who took some pounding but never retaliated. “Once you let them in your head, it’s game over. We wanted to come out and play clean and not have that many penalties. We just had to dial it in.”

Lundin won the face off and went right down the field and scored to swing the momentum back toward the hosts.

“I think that is the quarterback in him,” Oldham said of Lundin. “He us used to seeing how the defense sets up and when he sees an opportunity, he goes for it.”

The Wolves scored five straight to build a 13-7 lead with five-and-a-half minutes left in the first half. Ian Maughan capped the surge with a goal off a pass from Anderson.

“We are a momentum team,” Oldham said. “We build up, and you saw that today.”

Waterford did score the final three goals of the half as Green Canyon took a 13-10 lead into the break.

“We play better when we play as a team,” Oldham said. “We have some really good players, but you can’t play hero ball. Our game is to slide it around and find the opening.”

Goalie Peyton Johnson made a nice save to start the second half. After the teams traded goals, the Wolves would find the back of the net eight more times while the Raves recorded just one more score in the third. The Wolves scored five goals in a row in a time span of 70 seconds to seize control and take a 22-12 lead into the final period.

“We made a few defensive adjustments at halftime, and Dusty (Gasaway) hyped the team up, sparks us and we killed it,” Anderson said. “... Now we are going to be the underdog, but we have a good shot at this, and we are going to get ready and go take it to them.”

Ten different Wolves scored Tuesday, which had the coach smiling. Sampson had four goals, while Lundin had three and three assists.

“That is how we have been successful this year, spreading the scoring out,” Oldham said.

Next up for Green Canyon is fourth-seeded Olympus who beat Timpview on Tuesday, 16-6. On Friday, the Wolves will face the Titans (14-1) at 4 p.m. in Salt Lake City in the quarterfinals.

“It will be a battle against Olympus,” Oldham said. “They were undefeated until they played Park City in the last game of the regular season. I think we will match up well. We are excited to be able to keep going.”

Parker Robbins and Joshua Higginbotham teamed up for 11 goals for the Bobcats, who got three goals from Gage Leishman and one goal apiece from Easton Ballard, Wyatt Miller and Sean Tempest. Tempest led the way with a pair of assists for Sky View, which will host No. 6 Bountiful on Friday at 4 p.m.

“Our team played well today and we’re excited to keep moving forward with our season,” SV head coach Kyle Bland said. “The guys came out playing well all across the field. We had a great lead and we were able to get a variety of our players on the field tonight.”

Jack Jenson and Tyson McKee each converted on a pair of shots for Ridgeline, while Dante Villa contributed with a goal and an assist. McKee also had an assist.

Ellie Goins found the back of the net twice for Ridgeline, which also got goals from Belle Quiggle, MJ Topham and Alivia Jackson.

Madi Henrie led the way for Mountain Crest with three goals, followed by Taryn Durham with two and Kamrie Wilkinson with one.

Ethan Davis recorded a hat trick for the Grizzlies, who got a pair of goals and assists from Daxton Daniels, two goals from Kyle Humphreys and one goal each from James Thornley and Matthew Mason. Logan jumped out to a 5-1 lead after the first 12 minutes of action.