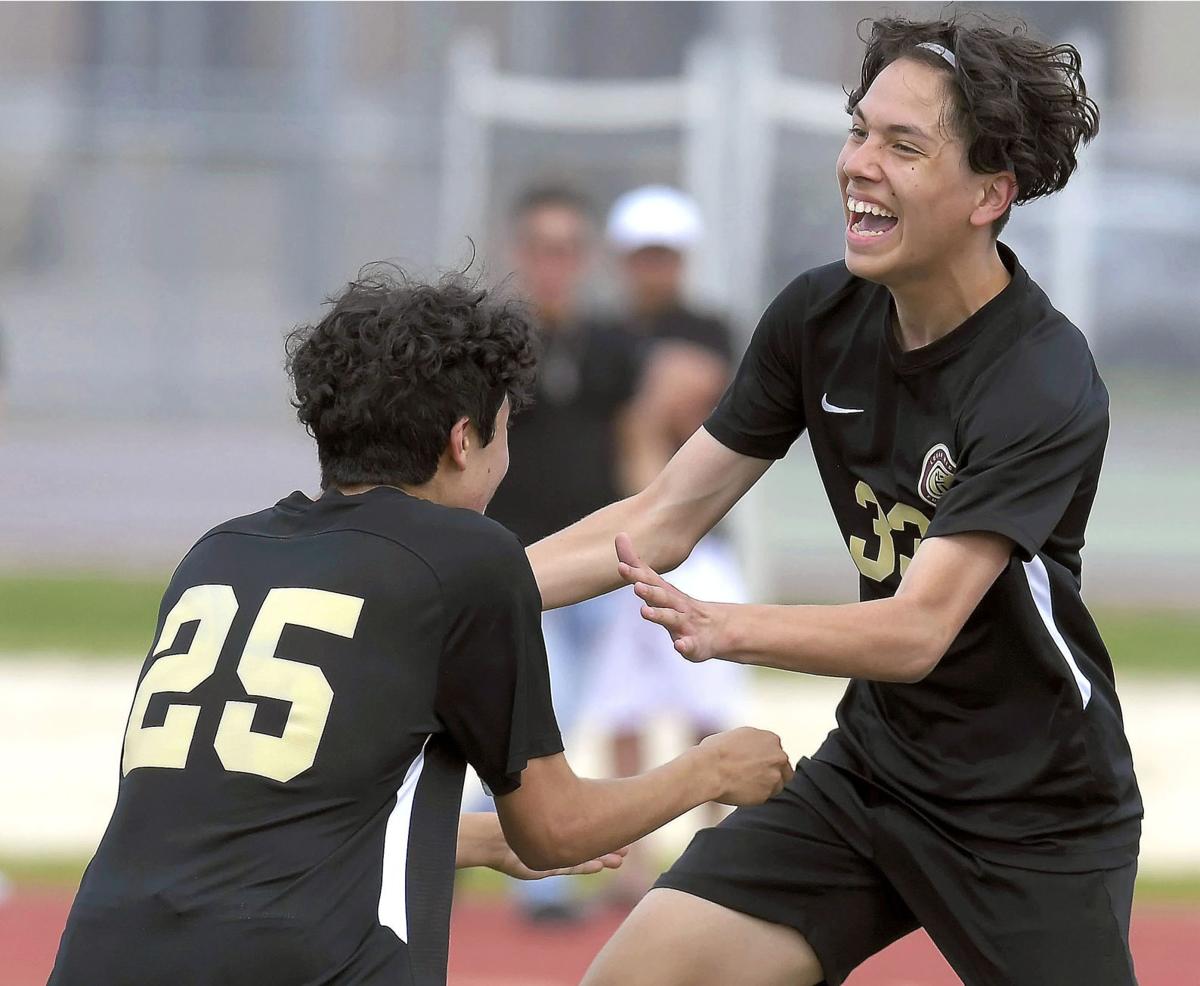 Logan’s Heber Prieto (25) congratulates Adrian Espinoza (33) after he scored a goal against Pine View on Friday in Logan. 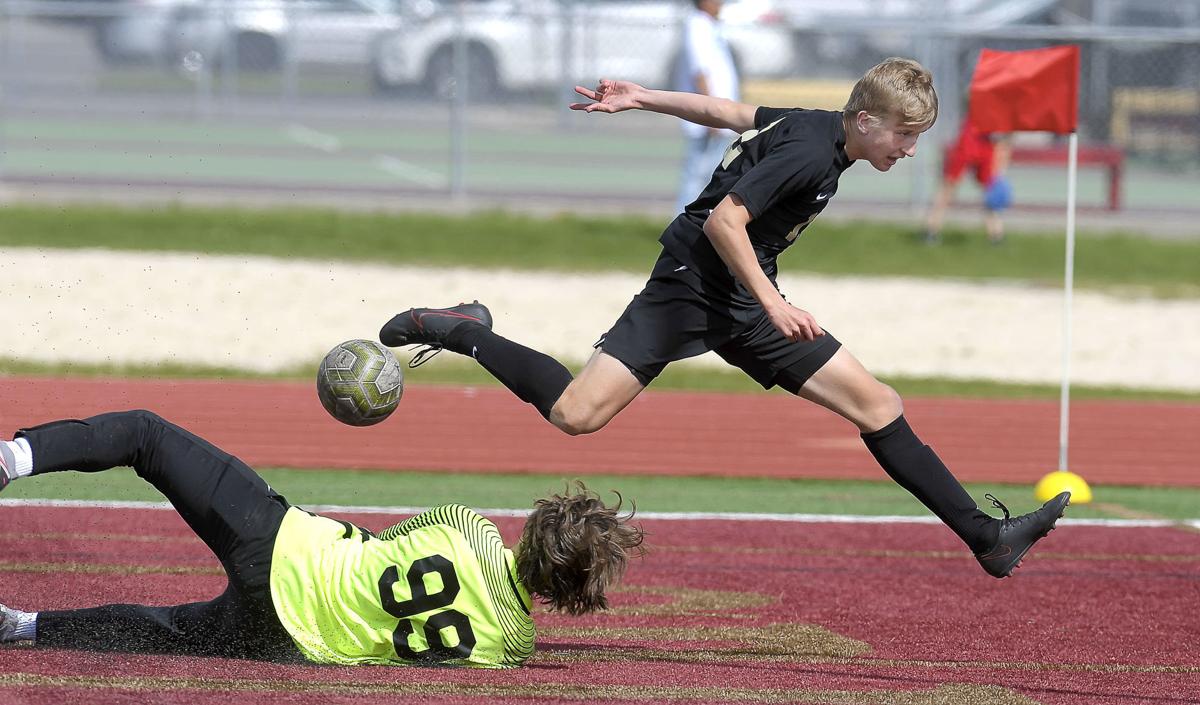 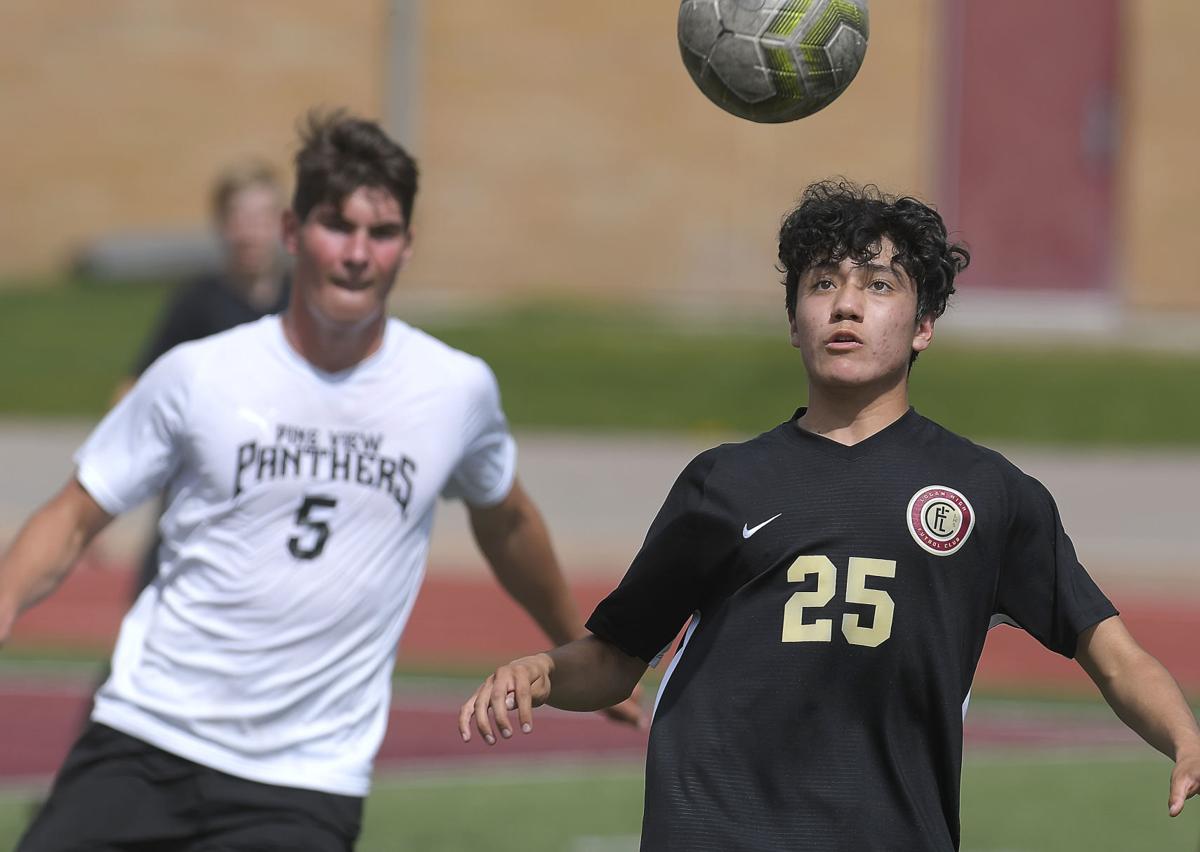 Logan’s Heber Prieto (25) congratulates Adrian Espinoza (33) after he scored a goal against Pine View on Friday in Logan.

There’s no question it’s been a challenging high school boys soccer season for the Grizzlies, who got off to a 1-6 start and then after seemingly turning a corner, were blown out by Ridgeline and Sky View in back-to-back matches in mid-April.

To their credit, though, the Grizzlies have never packed in it this spring. Instead, they have made significant strides over the past two weeks and the results can be seen.

Logan got its payoff in the form of a gratifying 3-0 victory over Pine View in the opening round of the 4A State Championships on a balmy Friday afternoon at Crimson Field. It was a well-rounded performance for the Grizzlies, who also earned their first shutout of the 2021 campaign.

“(It’s) unreal,” LHS head coach Natalie Norris said. “We have been working so hard and it finally just clicked with everything, and I couldn’t happen at a better time. So for us to finally get multiple goals from multiple assists, with a shutout, that was just perfect for us today. I’m proud of these boys.”

The 16th-seeded Grizzlies (5-11), winners of three of their last four matches, had to deal with a couple of nervy situations early on against the 17th-seeded Panthers (4-13). Pine View’s Austin Kogan fired off a shot from long range that took a tricky hop on Logan goalkeeper Chris Calvillo, but he was able to parry it aside for a corner kick.

Kogan was able to get his head on the ensuing corner kick, forcing Calvillo to come up with a huge reaction save in the eighth minute. The rebound went to Kogan, but he pushed his next shot wide right.

Logan played very well defensively the rest of the match, limiting Pine View to just four more shots — none of which were on frame. The Grizzlies didn’t really give the Panthers any legitimate scoring opportunities in the run of play.

“It just feels good because I know what our defense is capable of,” LHS standout center back Isaac Lopez said. “We’re definitely not a team that should be losing 6-0. It just feels great showing what we can do defensively and offensively as well.”

Not only did Lopez anchor Logan’s backline, he once again came through for his side offensively. No Pine View player stood over the ball immediately after the visitors committed a foul with 10 minutes remaining in the opening half, and the sophomore alertly took a quick free kick and buried it as he clearly caught the visitors off guard.

In Logan’s last three games, Lopez has converted on a pair of free kicks and a pair of penalty kicks.

“Honestly, I’m pretty confident,” Lopez said of his prowess on set pieces. “It’s always been a thing since I was younger, like I was always the free kick taker, penalty taker and now being able to do it at this level, it feels good. It gives me a boost every game, every time I put one away.”

The Grizzlies were able to dictate the run of play for the lion’s share of the second half and scored twice in the final 15 minutes to slam the door. The first insurance goal was netted by Andy Martinez, who got behind the Pine View backline on a well-weighted pass from Adrian Espinoza and showed a great deal of composure in slotting his shot past the keeper.

Logan’s third goal was a memorable one as Martinez played a perfect ball to Espinoza, who was clinical in finishing via a volley. Adam Manassra was another Grizzly who shined in the attack in the second half.

Up next for Logan is a showdown against top-ranked Juan Diego next Wednesday on the road. The Soaring Eagle (14-2) have won 12 of 13 matches after losing to Mountain Crest by a 4-1 scoreline on March 12.

“Honestly, I feel confident,” Martinez said. “Our whole team should feel confident. It’s going to be an intense game. We want it and I’m pretty sure they want it as well, so we’re coming for them. I’m looking forward to it.”

All five Cache County teams will compete in the round of 16 next Wednesday. No. 2 Green Canyon will host No. 15 Uintah, No. 5 Sky View will host No. 12 Cedar Valley, No. 7 Mountain Crest with host No. 10 Desert Hills and No. 11 Ridgeline will travel to No. 6 Crimson Cliffs.

No. 21 Bear River was eliminated Friday by No. 12 Cedar Valley, 5-2. Cedar Valley scored three times in the second half to pull away.