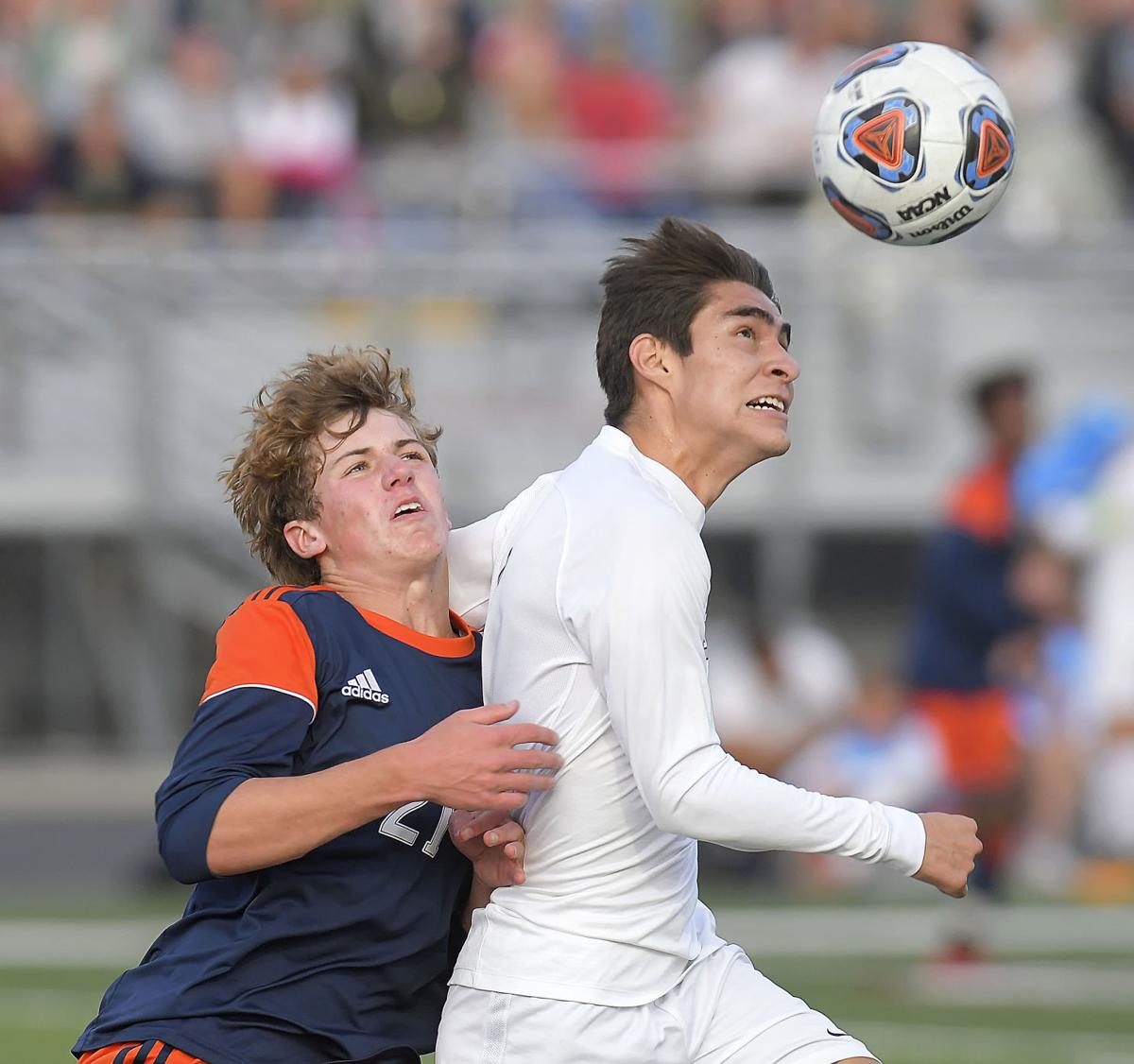 Mountain Crest’s Eli Clark, left, and Ridgeline’s Johan Salome fight for the ball during the second semifinal game at the 4A Boys Soccer Championships Monday night in Sandy. The Mustangs and Riverhawks were tied at 0-0 at halftime when The Herald Journal had to go to press. For a complete story of the game and more photos, go to www.hjnews.com. 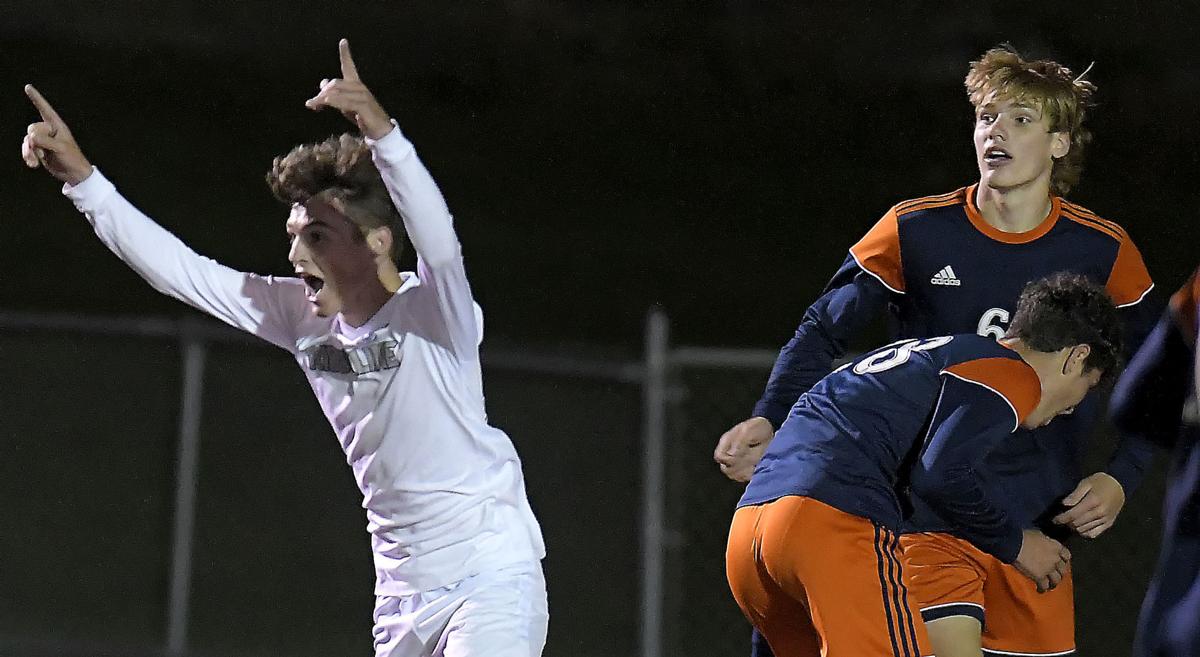 Ridgeline's Gabriel Watson celebrates after scoring a goal against Mountain Crest in the semifinal game of the 4A soccer tournament on Monday in Sandy.

Mountain Crest’s Eli Clark, left, and Ridgeline’s Johan Salome fight for the ball during the second semifinal game at the 4A Boys Soccer Championships Monday night in Sandy. The Mustangs and Riverhawks were tied at 0-0 at halftime when The Herald Journal had to go to press. For a complete story of the game and more photos, go to www.hjnews.com.

Ridgeline's Gabriel Watson celebrates after scoring a goal against Mountain Crest in the semifinal game of the 4A soccer tournament on Monday in Sandy.

SANDY ‑‑‑ Since April 23, the Riverhawks have only played once on their home pitch, but that hasn't fazed them one bit.

Instead, Ridgeline has pieced together some of its best soccer of the 2021 season on the road, and that trend continued Monday evening. As a result, the Riverhawks are only one win away from their primary objective.

Ridgeline was stingy defensively and persistent in the attack, especially in the second half, and was rewarded with a hard-fought 1-0 victory over rival Mountain Crest in the second semifinal match at the 4A Boys State Soccer Championships.

The 11th-seeded Riverhawks, who traveled to St. George and earned huge road victories in their first two playoff matches, will now square off against No. 8 Stansbury (13-4) for all the marbles. Tuesday night's 4A state title match is slated to begin at 7 o'clock.

"Unbelievable effort by our guys," RHS head coach Dale Buchanan said. "We had a rough go starting about Spring Break, had a couple of rough games. It wasn't because of their skill level, it was because of their mindset and focus, so we had to settle some things and relax. And when it came to the postseason, we traveled twice down to St. George and, after tonight's game, we're 8-2 on the road."

Ridgeline (12-7) survived some nervy moments in the first half and shortly after halftime, and then imposed its will on Mountain Crest (12-7) for large spells of the second half. Goalkeeper Isaac Britt made four phenomenal saves over the final 40 minutes of action to keep the seventh-seeded Mustangs level or within striking distance.

"Yeah, Britt's done it all season for us," MC head coach Justin Beus said. "Britt's a phenomenal goalkeeper. I would say he's the best in the valley. He's a great player."

A Jackson Hulse header off a free kick appeared to be destined for the back of the net, but Britt dove to his right to parry it aside for a Ridgeline corner kick. Britt also robbed Gabe Watson with a kick save, punched a screamer of a shot over the crossbar and denied the Riverhawks on a late breakaway to give the Mustangs new life.

The Riverhawks finally got the breakthrough they were looking for in the 73rd minute. Hulse deftly switched the point of the attack and found a streaking Watson, who dribbled inside the 18-yard box and slammed home an unsavable shot top shelf.

"I was happy to finally get one through," Watson said. "I had some chances earlier. We struggled for a little bit, but we finally put one in the back of the net."

Ridgeline's defensive performance was arguably even more impressive, especially after halftime. The Mustangs got into some dangerous spots, but were unable to get off shots on a couple of occasions. Ridgeline limited Mountain Crest to a pair of shots in the second half and fired off 15 of its own.

The Mustangs were only shut out three times this season ‑‑‑ twice by the Riverhawks, who recorded their seventh clean sheet of the campaign. Monday's showdown was the rubber match as the two programs split during the regular season.

"I think defensively we were disciplined in watching for what this opponent does," Buchanan said. "We're fairly familiar with their style and also their individual players. A lot of the players play on the same (club) teams and so I think what helped us tonight was the resolve to be patient and disciplined."

Mountain Crest got off to a strong start and was definitely a bit unlucky not to dent the scoreboard early on as Conner Leishman headed a corner kick off the post. Dylan McArthur and Gabriel Newman also had very dangerous scoring chances for the Mustangs in a back-and-forth first half, and Newman's strike required a diving save by Riley Garvert.

"This team had never been in the playoffs, much less the semifinals, so I think once the first half was done, we got the nerves out and (our guys) were resolved to play our style, and I think they did a great job of doing that," Buchanan said. "It took a while to get that goal, but it was persistent, disciplined effort (by our guys)."

Britt was called upon to break up a Ethan Green through ball to Tate Godfrey just in the nick of time in the first half. The Mustangs also made a big defensive play at the back post during the first 40 minutes of action.

It was the final game for five Mountain Crest seniors.

"Man, I'll tell you what, I'm proud of these guys," Beus said. "They're awesome. I'd take the field with this group of boys any time over anyone else. They're awesome and I enjoy coaching them."

Meanwhile, the Riverhawks will aim for their second state championship in program history. A senior-heavy Ridgeline side captured the title in 2017, but it's been an uphill battle to get back to this position. Buchanan credited his coaching staff for helping turn the tide. Simply put, the Riverhawks have made tremendous strides since an inexperienced group of players went 3-9-0 in 2018. The current Ridgeline seniors were freshman back then.

"I just want to thank this tremendous coaching staff," he said. "... There's a lot of heart and dedication and effort. Every coach contributes, every coach has input on everything we do. It's a very collaborative environment."