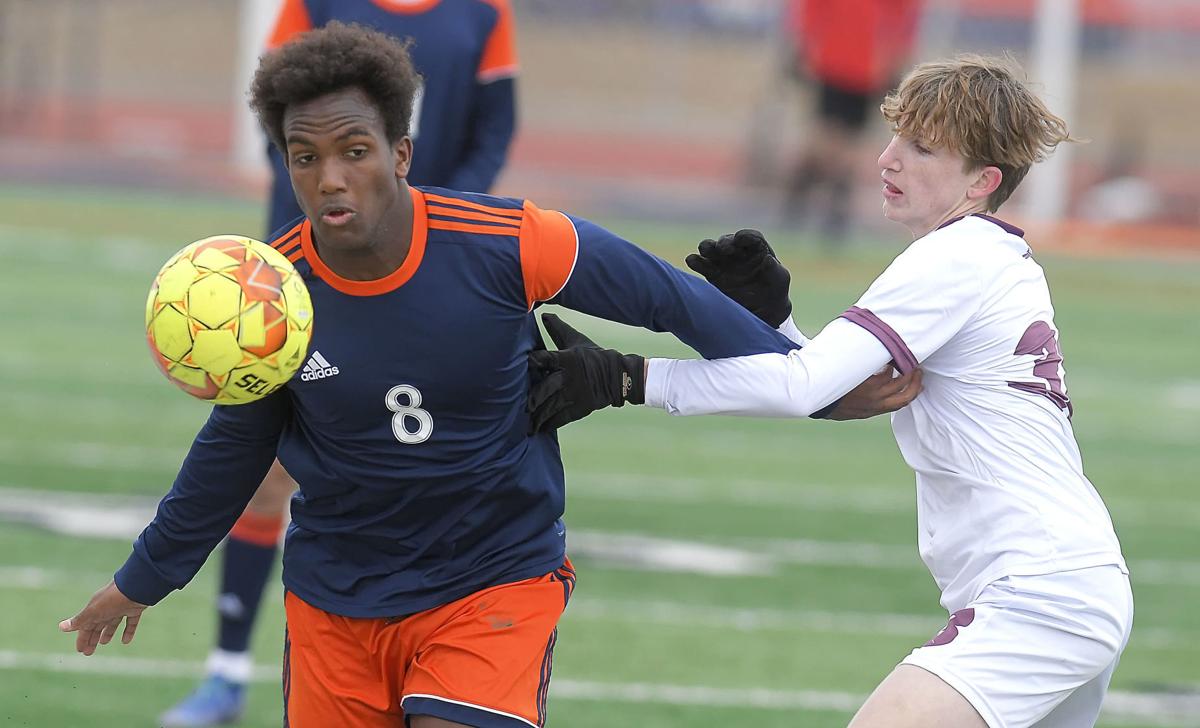 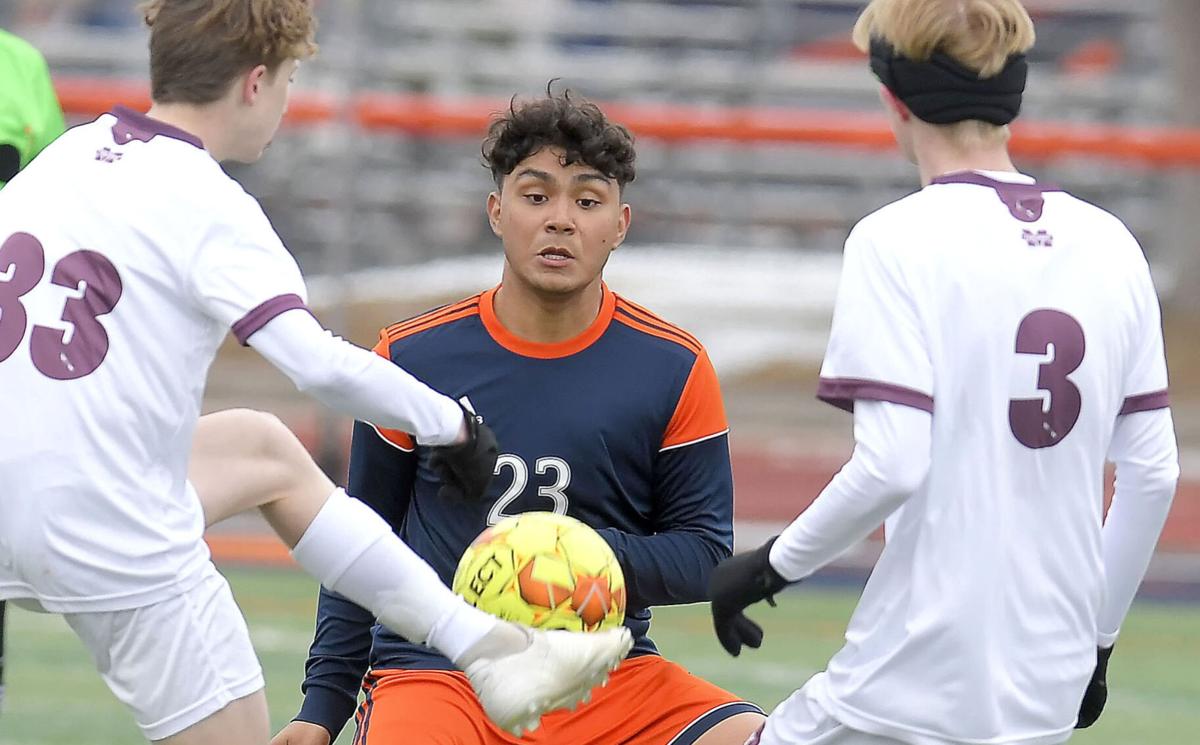 HYRUM — A rough 90-or-so-second stretch of the opening half threatened to derail the Mustangs in their home and season opener, but they were up to the challenge.

Morgan scored in the 22nd and 23rd minutes to take a 2-1 lead, but Mountain Crest equalized after halftime, was in control during both overtime periods and prevailed in a shootout in a non-region boys soccer match on a chilly Tuesday at Lynn R. Miller Field. The Mustangs won the shootout 4-3.

“I’m proud of the grit we had this first game,” MC head coach Justin Beus said. “It’s definitely something we can build on, so that’s great.”

It didn’t take the Mustangs long to score their first goal of the 2021 campaign as they dented the scoreboard less than five minutes into the match. Justin Burnett whipped in a dangerous corner kick that eventually ended up at the back post, and Oliver Thompson was there to rip home a top shelf finish from point blank range.

Mountain Crest dictated a good portion of the run of play early on, but Morgan pulled even with a very nice goal midway through the opening half. The Trojans deftly switched the point of attack and Chase Lane found Cameron Burt in the heart of the 18-yard box, and Burt’s shot found the back of the net.

Less than two minutes later, Lane chested down a Cole Terry pass and fired a shot past Mountain Crest goalkeeper Isaac Britt. Lane gave the Mustangs fits with his speed throughout the game.

“It was (a) great (early test) because we’ve got a lot of speed in our region and I think we learned real quick that we’ve got to mark tight on those (fast) guys,” Beus said. “You can’t give them a step or else they’re in behind you.”

The Trojans nearly netted an insurance goal early in the second half when Luke Fackrell latched onto a corner kick at the near post, but his shot pinged off the post.

Burnett blasted a free kick from distance a few inches over the crossbar 11 minutes into the second half, and that seemingly helped turn things around for the hosts. Four minutes later, Burnett was taken down in the box while battling for the ball with a pair of Morgan defenders.

Mountain Crest center back Zane Allen was called upon to take the penalty kick and he unleashed an unsavable strike with his right foot past Morgan keeper Tanner Stanley.

Dylan McArthur nearly gave the Mustangs a 3-2 lead in the final seven minutes of regulation, but Stanley displayed his athleticism on McArthur’s deflected shot and snatched it just before it dipped under the crossbar. Stanley also made what Beus called “a really good save” on a shot by Thompson in overtime.

Thompson was able to return after getting injured while challenging Stanley for a 50-50 ball in the second half. A few players from both teams were shaken up throughout the match after taking a spill on the cold pitch.

Beus felt his side had five or six legitimate scoring chances during the two 10-minute overtime sessions.

Instead of dwelling on those missed opportunities, the Mustangs regrouped and were clutch from the penalty spot. Jaxon Maughan, Allen and Thompson all converted on their PKs to put Mountain Crest in the driver’s seat. Meanwhile, the Trojans skied one of their penalties over the goal and Britt came through with what Beus called an “awesome diving save,” on their fourth attempt. That set the stage for Mustang senior Gideon Newman and he buried his 12-yard shot to slam the door.

“Oh, it’s big because nothing can end in a tie anymore and ... it’s really nice to get an early shootout and have it go our way,” Beus said. “And we happened to work on the shootout scenario in practice a couple days this past week, so I think that really helped us.”

Three other Cache Valley teams were in action Tuesday and all three fell to opponents from larger classifications. Ridgeline lost at home to 5A Viewmont 1-0 as the Vikings converted on a corner kick with two minutes remaining in the second half. Sky View lost at 6A Weber 3-0, while 6A Davis scored five times in the first half and coasted pass visiting Logan, 7-0.

Ridgeline head coach Dale Buchanan was very pleased with how his side performed in its season opener and singled out several players by name. Keeper Riley Garvert made some big saves, Buchanan asserted, and “center backs Johan Salome and Luke Dustin anchored the defense and contributed directly by denying six or seven definite goal scoring opportunities.”

It’s a busy start to the season for the Riverhawks, who will play three matches this week and three the following week.

“We prefer to play good 5A and 6A opponents in preseason to prepare for a very competitive region, and Viewmont has a very fast-placed, organized and efficient attacking style,” Buchanan said.

Weber scored twice in the first half and once in the second against Sky View. Bobcat head coach Jorge Cruz liked what he saw from his squad after halftime and was especially pleased with Britain Baird and Landon McClellan, who are both playing new positions.

“Even though we have players coming back to our Sky View program, our varsity team is pretty new and players needed to adjust to each other, get to know the style of play, speed of play and a few other technical and tactical aspects of the game we like to play,” Cruz said. “We struggled in the first half of the game. Weber is a very good soccer program with lots of talent, and they definitely taught us a thing or two.”

Logan was forced to play a man down for at least 50 minutes against Davis, head coach Natalie Norris said. The Grizzlies were able to keep the Darts off the scoreboard nearly the entire second half before the hosts converted on a pair of corner kicks in the final three minutes.

“I was super proud of how (my team) turned things around the second half,” Norris said. “They showed a lot of character, which makes me really excited for the season. Obviously lots to work on, but some really good positives as well.”

Sky View shined offensively in its season opener as it racked up 15 hits and scored in five of the seven innings en route to a 11-9 road victory over 6A Hunter. The Bobcats put a five-spot on the scoreboard in the top of the first.

Nine different Bobcats finished with at least one hit, and Tawnee Lundahl had three, including a triple. The freshman also walked, scored twice and limited Hunter to a pair of unearned runs in her four innings in the circle. Lundahl scattered six hits, struck out eight and walked one.

Cambria Davis singled three times, walked twice and plated a trio of runs for the Bobcats, who got two runs and two hits from Skylee Haramoto and Preslie Jensen, and two RBIs from Carlee Watterson and Brynn Mayhew. Jensen, Mayhew and Hadlee Noble all doubled, and Harmoto chipped in with two RBIs.

“It was a great way to start our season,” SV head coach Amanda Robinson said. “We have been working hard during the offseason and it paid off tonight. I feel like we came together well as a team.”