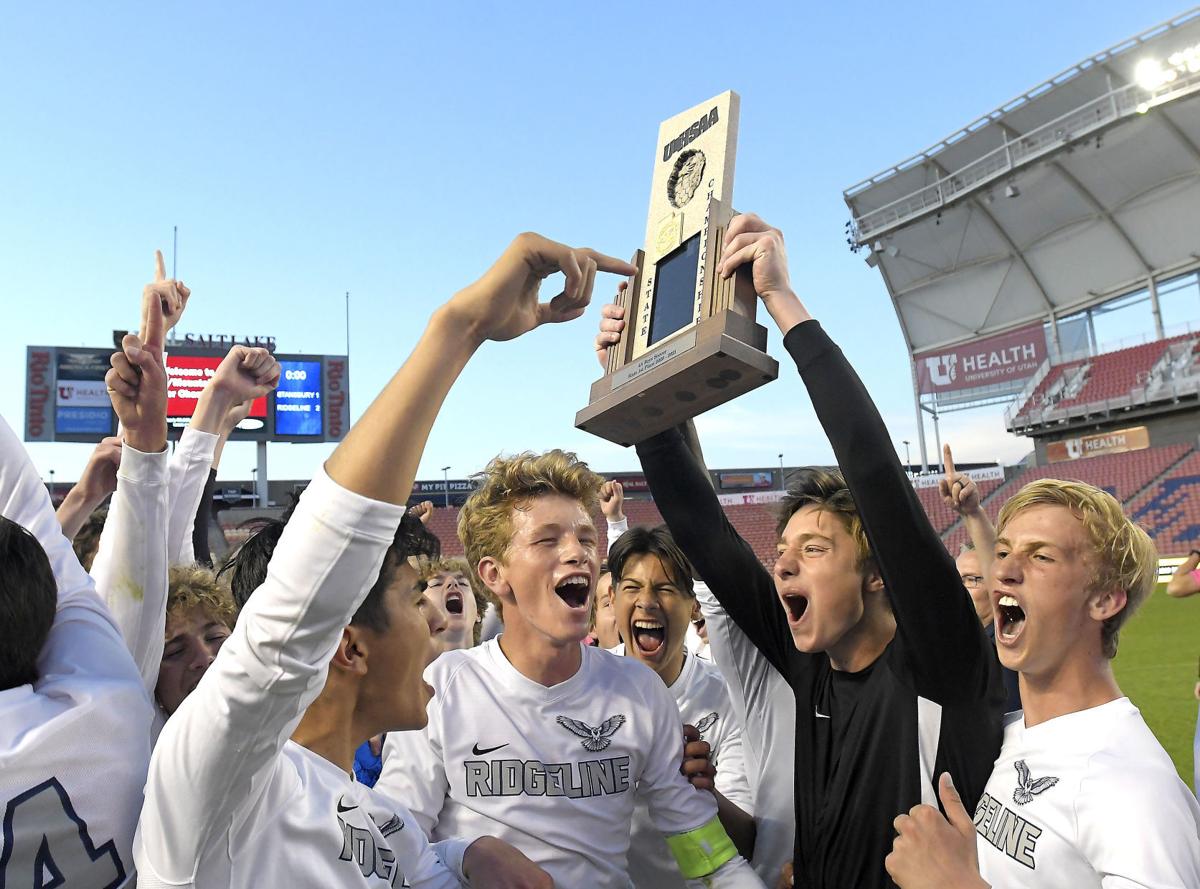 Ridgeline players celebrate after defeating Stansbury 2-1 to win the 4A soccer championship on Tuesday in Sandy. 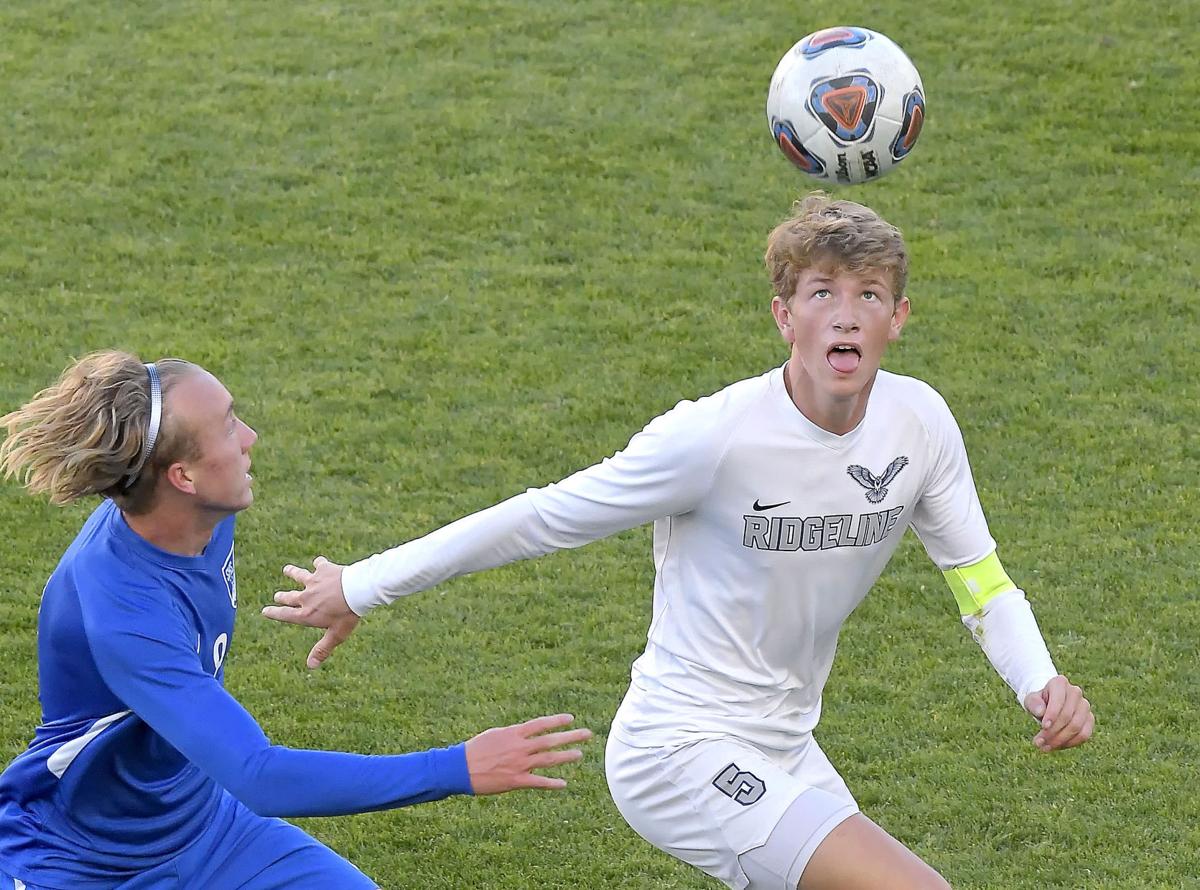 Stansbury's Kolton Loertscher, left, and Ridgeline's Luke Dustin chase after the ball during the 4A soccer championship match on Tuesday in Sandy. 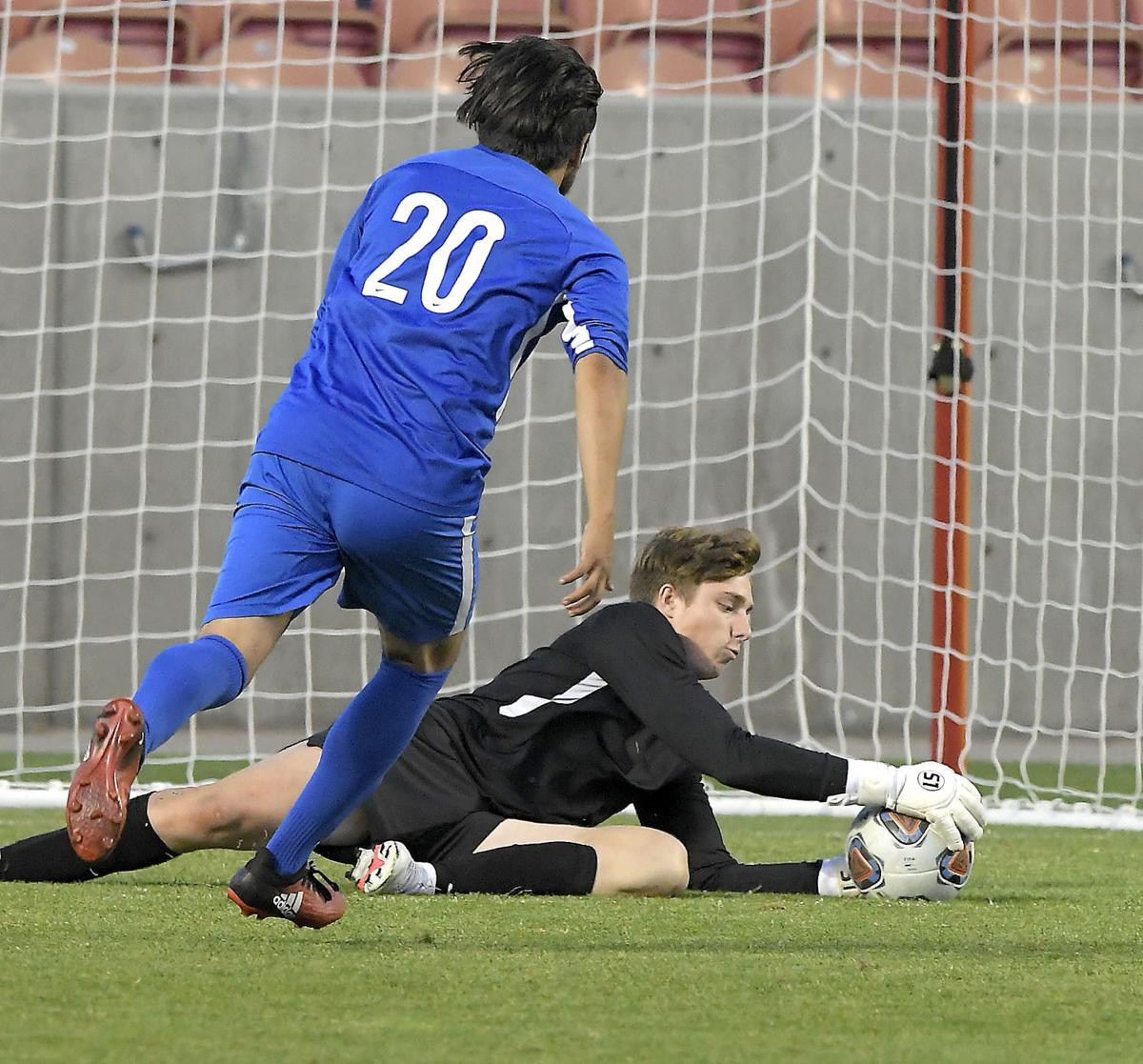 Ridgeline goalkeeper Riley Garvert saves the ball against Stansbury's Dante Silvestri during the 4A soccer championship match on Tuesday in Sandy.

Ridgeline players celebrate after defeating Stansbury 2-1 to win the 4A soccer championship on Tuesday in Sandy.

Stansbury's Kolton Loertscher, left, and Ridgeline's Luke Dustin chase after the ball during the 4A soccer championship match on Tuesday in Sandy.

Ridgeline goalkeeper Riley Garvert saves the ball against Stansbury's Dante Silvestri during the 4A soccer championship match on Tuesday in Sandy.

SANDY — It’s been a rebuilding effort four seasons in the making — well, essentially three since nearly the entire 2020 campaign was canceled due to COVID-19 — for Ridgeline, but it was well worth the wait.

Three years ago, the Riverhawks only returned three players with any real varsity experience from their 3A state championship side, and the results could be seen as they won three matches and finished in last place in the Region 12 standings. Ridgeline’s current seniors were freshmen at the time and they were determined to leave their mark on the program.

Mission accomplished as 11th-seeded Ridgeline capped off a gratifying 2021 season by earning a hard-fought 2-1 victory over No. 8 Stansbury in the finals of the 4A Boys State Soccer Championships on a picture perfect Tuesday evening at Real Lake Salt’s Rio Tinto Stadium. For the second time in as many nights, Ridgeline sophomore Gabe Watson scored the game-winning goal in the final 11 minutes of the second half.

“I think it’s all worth it for this,” RHS senior Jackson Hulse said of the rebuilding process. “I mean, this is what we dreamed of, this is what we worked for, so all of those loses and those hard practices (over the past few years), those were all worth it. This feels amazing.”

The Lady Riverhawks beat defending state champion Ogden in the finals last fall to capture their first state championships. This is the first time a Cache Valley school has has both soccer teams reach the top of the summit in the same academic year.

Three of Ridgeline’s boys coaches, Dale Buchanan, Mark Tureson and Richard Alexander, are on both coaching staffs. Buchanan is the head coach on the boys side, while Tureson oversees the girls program.

“I think that’s it’s phenomenal,” Buchanan said. “I can’t explain what it feels like, what the process is like to see a foundational program on both the boys and girls (sides) at the same high school have such phenomenal support from parents, administrators and especially the players and the coaching staff. The coaching staff is extremely dedicated and it’s all in (with this staff). We have a mindset of continuous improvement and everyone gets to contribute.”

Buchanan also gushed about the dedication of his senior class, which is comprised of Hulse, Johan Salome, Luke Dustin, Jaxon Olsen, Gabriel Tinney, Tate Godfrey and Ethan Green. This year’s Ridgeline team featured a perfect mix of talented, experienced seniors and underclassmen who were difference makers.

“I saw tremendous leadership from our seniors,” Buchanan said. “From their freshman year to where they are now is absolutely different. They are incredibly mature this year. I think overall everybody is all about the team and that is the whole program, so it doesn’t matter if it’s the sophomore team, JV team, varsity team, girls or boys. Everybody’s all in for the benefit of the program.”

The Riverhawks (13-7) experienced some highs and lows this spring, which is understandable when you consider the quality of competition in Region 11, but they certainly peaked at the right time. Ridgeline won its final five matches and all four of its playoff victories were earned on the road or at a neutral site.

“At the beginning of the season, we were all kind of iffy about it, but then once we started getting into all of the games we started to realize that we’re better than we actually thought we were,” Green said. “And so we just kept grinding and working hard to succeed, and here we are with a state championship to show for it.”

It was a memorable high school finale for Green, who served a perfect free kick to Watson for the game-winner. Watson was inside the 6-yard box when his one-time effort beat Stansbury goalkeeper Devun Collins in the 70th minute. Watson propelled Ridgeline past Mountain Crest and into the championship match with a top shelf finish with seven minutes remaining.

“He is such a worker and he’s a model of a lot of the players that we have,” Buchanan said of Watson. “He is dedicated, he smiles all of the time, he’s got a great attitude and I think his determination to finish and get in and score will perpetuate that same thing in others his own age, the freshmen and the incoming freshmen next year. He’s going to be a model player for us the next two years, there’s no question.”

Stansbury (13-5) had a couple of dangerous opportunities, plus a couple half chances to equalize, but Ridgeline was resolute enough in its defending to ice the game. The Stallions, who beat Sky View in a semifinal shootout, definitely proved to be a worthy opponent in the finals.

The Stallions arguably had the momentum before the Riverhawks dented the scoreboard 25 minutes into the opening half. Grady Workman collected a pass from Watson, dribbled into the right corner of the 18-yard box and took a shot that appeared to take a slight deflection off a Stansbury defender before tucking inside the far post.

Stansbury equalized less than three minutes into the second half on a lovely right-footed strike by Maximus Rouffignac that found the upper 90 of the far post. The Stallions nearly converted on a corner kick during the first 40 minutes of action, plus Samuel Holdstock was wide open at the back post in the second half, but his volley went right to Ridgeline standout keeper Riley Garvert. Garvert and the Riverhawks secured their seventh clean sheet of the season in Monday’s semifinal game.

Tuesday’s title match was a culmination of a wild and unpredictable state tournament in the 4A classification. Case in point: The higher-seeded team prevailed in every single match from the quarterfinals through the finals.

“I think on any given day soccer is a sport where anybody can win,” Buchanan said. “It doesn’t matter what their record is, it doesn’t matter what their size, their speed, their strength, their abilities are. What we try to do as a coaching staff is prepare a game plan. The players do a great job of preforming and they are comfortable with the rotations that we’ve put in, based on what each game needs.”