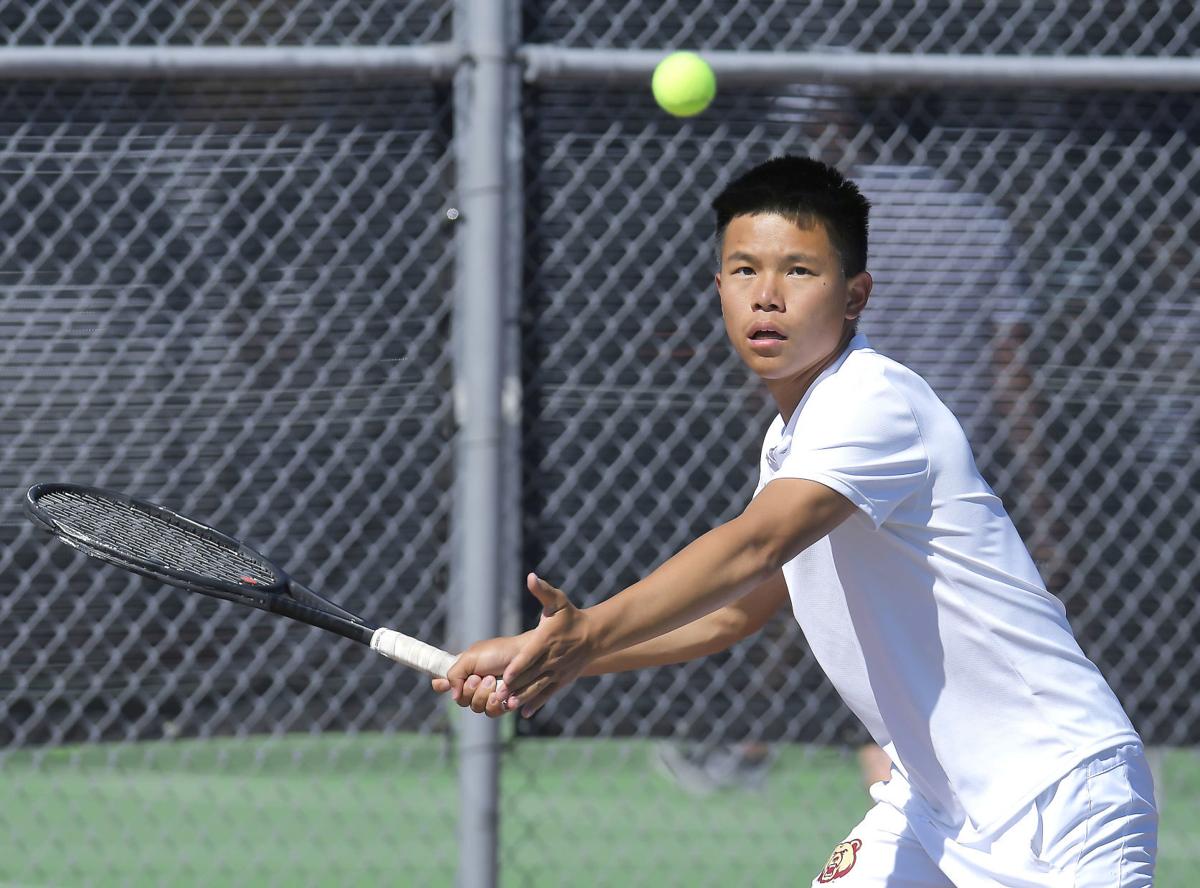 Logan’s Ashton XU returns the ball during his singles match against Mountain Crest’s Bryton Mussleman on Thursday in Logan. 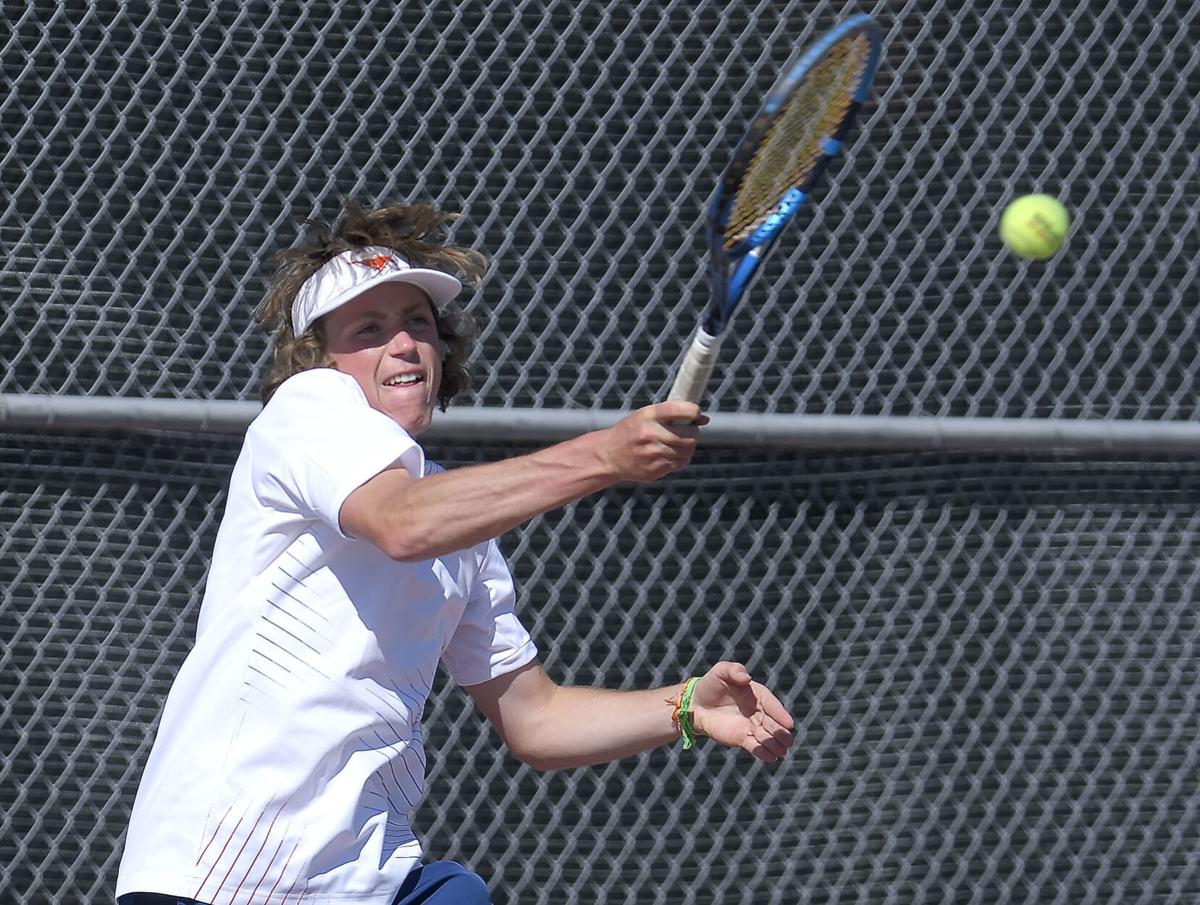 Mountain Crest’s Braxton Stoker returns the ball during a singles match against Logan on Thursday.

Logan’s Ashton XU returns the ball during his singles match against Mountain Crest’s Bryton Mussleman on Thursday in Logan.

Mountain Crest’s Braxton Stoker returns the ball during a singles match against Logan on Thursday.

With talented teams like Green Canyon and Ridgeline standing in their way, a second straight Region 11 Tournament title will be a challenge for the Grizzlies, but they’ve put themselves in a good position to defend their championship.

Logan’s boys tennis program capped off an undefeated season in region duals with a 5-0 victory over visiting Mountain Crest on a warm Thursday afternoon. Simply put, the Grizzlies have passed every test so far this spring and will be the team to beat at the region tourney, which will be contested next Wednesday and Thursday at Green Canyon.

“It is definitely a tough region,” LHS head coach James Larsen said. “There’s a lot of great schools, a lot of great individual players here and it’s awesome to be able to get 10 team wins out of it. Going into the region tournament, it obviously gives us a leg up to be 10-0, to be in the first-place position. So yeah, it feels great and we’re really looking forward to the region tournament, but we’ve got some work to do before then to get the boys ready.”

Logan (12-0 in dual play this season) have swept its last three region opponents despite not having the services of No. 1 singles player Kimbal Ricks. The senior will be back for the region tourney. The Grizzlies have used three different lineups since Ricks has been out of town and Larsen has been pleased with how his athletes have adjusted.

“We’ve been very intentional about every match and every lineup with Kimbal being gone, first of all to make sure that we get the wins ... but also putting each of our players in a position to learn and get better,” Larsen said. “Being able to switch up doubles lineups has been really nice, to learn from different players and to kind of get a little bit different looks. I’ve been really impressed with how our players have responded.”

The Grizzlies have been led this season by No. 3 singles player Paul Miller, who will take a 17-0 record into the region tournament. The senior has yet to drop a set against a rival opponent so far this spring.

Miller moved up to the No. 2 spot against Mountain Crest and dispatched of his foe, 6-0, 6-1. Miller was the region tourney runner-up at third singles as a sophomore and is clearly a more aggressive player than he was two years ago. Case in point: The lanky senior came to the net several times Thursday and slammed the door with a volley winner on match point.

“I used to be kind of a pusher, but now I’ve started to get a little more strength and I’ve been able to start playing as the aggressor during the match, which has been nice,” Miller said. “I’ve been able to shorten up match times and have been able to dictate (the pace) myself instead of relying on the other person missing a shot.”

Logan’s other singles players also won in comfortable fashion Thursday as Ashton Xu rolled to a 6-1, 6-0 win, and Jungsung Lee was tested in the second set before prevailing by a 6-0, 6-4 scoreline.

Both doubles matches were competitive, which wasn’t a surprise because the Mustangs have been rock solid at both positions this season, despite using a couple of different lineups.

Dohoon Kwag teamed up with Phillip Xu to defeat the tandem of Zach Fricke and Camden Oswald 6-3, 6-4 at first doubles. Osward uncorked some big groundstrokes to help keep the Mustangs close, but Kwag and Xu were mentally tough and managed to close things out on their fourth match point. Kwag came through with a big passing shot to set up the fourth match point.

At the No. 2 doubles spot, Caleb Xu and Gabe Gilbert came storming back from a 2-1 second-set deficit to emerge victorious by a 6-3, 6-2 scoreline over Carter Davis and Isaac Parker.

Mountain Crest head coach Jackie Oswald was hopeful her boys would test Logan a bit more Thursday, but it’s still been a pretty encouraging season for her squad. The Mustangs solidified themselves as the No. 4 team in the region by sweeping Sky View on Tuesday. All three singles matches were competitive two-setters, while the Mustangs won convincingly at both doubles positions.

Mountain Crest’s Tuesday lineup was comprised of Fricke, Oswald and Braxton Stoker at singles, and the doubles duos of Bryton Mussleman/Mike Hardy and Davis/Parker.

“We’ve improved, which has caused part of the lineup changes,” coach Oswald said. “We’ve had some of the kids in the middle improve and have beaten some of our upper kids (in challenge matches). But overall, I’ve seen a lot of improvements all the way down (our lineup), which has been good to see.”

Logan swept Bear River in its other region dual this week. All of the matches were decided in straight sets and no Grizzly lost more than two games in a set. Kwag, Ashton Xu and Miller were Logan’s singles players in that dual, with Lee/Caleb Xu and Phillip Xu/Ankit Garg manning the doubles positions.

It was a busy week for Ridgeline, which competed on back-to-back-to-back days. The Riverhawks swept the Bears and Bobcats and lost a 3-2 nailbiter to Green Canyon. It was also a 3-2 scoreline when the two teams squared off earlier in April, but Ridgeline prevailed that time.

Ridgeline singles players Thatcher Ellis (No. 1) and Davis Low (No. 3) went 3-0 this week, while No. 2 singles player Ayden Rupp went 2-1. Rupp did win the opening set against Green Canyon standout Calvin Felt, who rallied and was triumphant in three.

Both Ridgeline doubles teams, Ben Olson/Tag McCullough (No. 1) and Isaac Peterson/Nick Clark (No. 2), reigned supreme in two of their matches.

Thatcher was able to avenge his only region loss against GC’s Carter Thorpe and he was able to do so in comfortable fashion. The sophomore will be the top seed at the region tourney.

“Thatcher has had an impressive few weeks,” RHS head coach Ryan Cheney said. “I am impressed by his resilience after losing a set or even a match. He never quits and never makes excuses for himself. I think the success that he is having right now is a more of a testament to the work he has put in for the past year, though. Anyone who is close to Thatcher will know how much he has improved in the past year and it’s the result of countless hours on the court.”

It was a good week for Green Canyon, which will head into the region tournament with the second-most points. The Wolves got revenge against the Riverhawks and, two days later, swept Bear River, and then swept Mountain Crest on Friday.

Both Green Canyon doubles teams, Andrew Westwood/Jared Anderson (No. 1) and Luke Olsen/Jeff Huband (No. 2), earned hard-fought wins over their Ridgeline counterparts. The Riverhawks swept the Wolves in doubles action a couple weeks ago.

“Our doubles teams left their first matches against Ridgeline feeling that they hadn’t played their best,” GC head coach Christian Davenport said. “They played hard on Wednesday and started getting back into their groove. In the end, both of our doubles teams snuck out with the win and we’re confident that they’ll play even better at region.”

The Wolves used a different second doubles lineup in their dominant victory over the Bears. Thorpe, Felt and J.C. Fonnesbeck competed at singles per usual, as did Westwood and Anderson at first doubles. Olsen teamed up with Andrew Bingham at No. 2 doubles this time around.

The Wolves used the same three singles players against the Mustangs, but mixed up their doubles teams. Westwood and Olsen teamed up at the No. 1 spot, and Huband and Bingham at the No. 2.

Green Canyon has a very deep JV squad this spring.