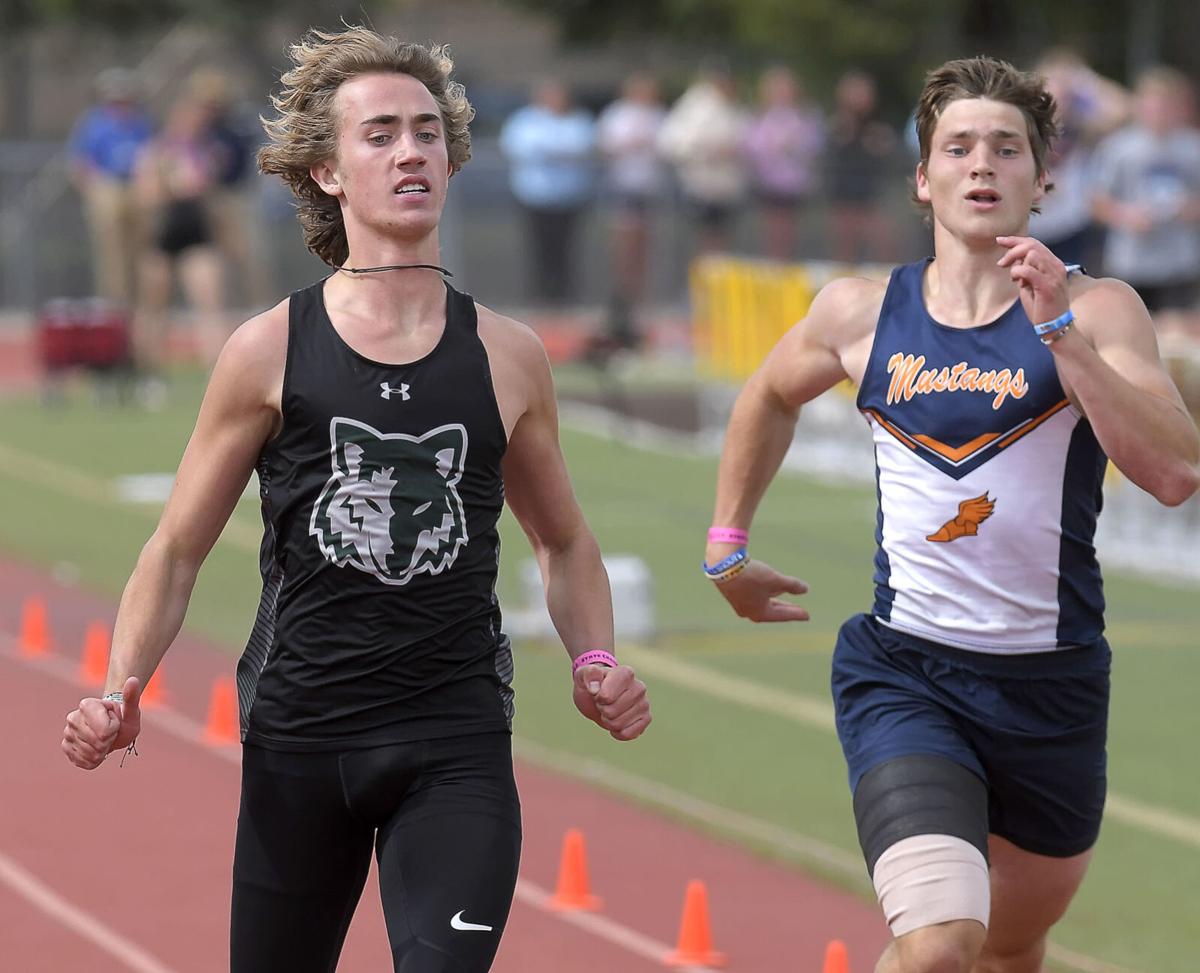 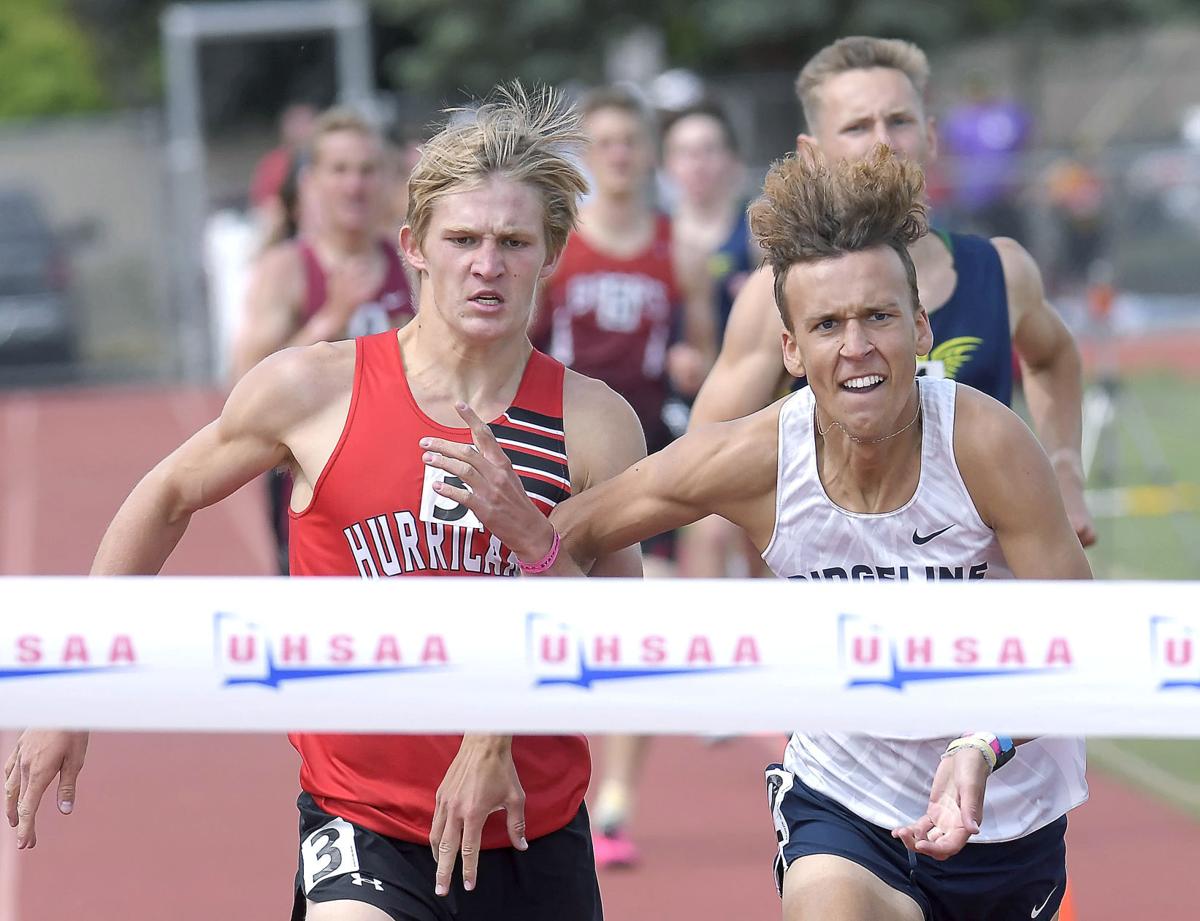 Hurricane’s Joshua Armstrong, left, and Ridgeline’s Spencer Adams approach the finish line in the 800 meters at the 4A state track meet on Saturday in Kaysville. Adams was disqualified after judges ruled that his right arm impeded the progress of Armstrong as he tried to pass.

Hurricane’s Joshua Armstrong, left, and Ridgeline’s Spencer Adams approach the finish line in the 800 meters at the 4A state track meet on Saturday in Kaysville. Adams was disqualified after judges ruled that his right arm impeded the progress of Armstrong as he tried to pass.

KAYSVILLE — All season long, Green Canyon’s boys 4x400-meter relay team has been primed for success, but those top four runners have rarely all been healthy at the same time.

Once again, there were some lingering health issues going into the final meet of the 2021 campaign, but it wasn’t enough to prevent the Wolves from achieving their goal.

Green Canyon’s McKade Hellstern, Carson Gerber, Jackson Monz and Carter Compton teamed up to hold off Region 11 rival Bear River in an epic showdown in the final event of the 4A State Track & field Championships, which concluded Saturday at Davis High School.

It was back and forth between the two relay squads the entire race, but Compton was able to retake the lead from Bear River’s Braxton Hurst with about 200 meters remaining. The Wolves claimed the title with a school record time of 3 minutes, 23.44 seconds, which was four-10ths of a second faster than the Bears.

“It was a ton of fun and we were all really looking forward to running fast,” said Monz, who is also one of 4A’s top performers in the 800. “It was the best feeling to be a part of a state championship 4x400 team.”

Was Monz expecting the race to come down to the wire like that?

“Yes, I did,” he said. “We have gone back and forth (with Bear River) with who beats who, so I knew it would be super close.”

It was a triumphant ending to what was at times a heartbreaking day for local boys athletes at this two-day meet. Green Canyon’s Cameron Kunz and Ridgeline’s Spencer Adams barely missed out on state championships and, in Adams’ case, it was in gut-wrenching fashion.

Adams and Hurricane’s Joshua Armstrong put on a splendid show in the 800. The Ridgeline senior took the lead with about 200 meters remaining and stumbled his way into a hard tumble across the finish line while trying to hold off the state champion wrestler and 1,600 runner. Adams was credited with a time of 1:54.95 to Armstrong’s 1:54.98.

However, an official ruled Adams’ right arm impeded Armstrong as they both battled it out at the tape, and Adams was disqualified. Ridgeline head coach Katrina Parker appealed the decision, but to no avail. Parker was frustrated she was not allowed to see video of the conclusion of the race.

To his credit, Adams — the Region 11 champion in the 800 and 1,600 — was able to mentally, physically and emotionally bounce back by throwing down a sub-49-second split as part of Ridgeline’s 4x400 relay squad. The senior joined forces with Brock Parson, Owen Moss and Jake Smith to finish fourth in that race (3:29.98).

“I am so impressed with him,” Parker said of Adams. “He has done everything we have asked, he has put the work in and today he ran like a beast. I am so incredibly proud of how he handled himself, especially today. He represented himself, his family and Ridgeline High well. We appreciate the support we felt from everyone. My heart breaks for him.”

Meanwhile, Kunz was one of two 4A high jumpers to clear the bar at 6 feet, 4 inches. However, Uintah’s Trey Briggs was successful on his first attempt and earned the title. It was still a very fulfilling season for Kunz, who didn’t even start high jumping until this spring. Close friend Jalen Hinds convinced the senior to come out and it ended up being a wise decision.

“I didn’t even know what was a good height before (this season),” said Kunz, who cleared 6-5 and broke his own school record at last week’s Region 11 Championships. “I mean, my first meet I (cleared) 5-4 and I thought 5-8 and 5-10 was like insane. And then I guess the height and strength I got from training this year for basketball and everything just kind of helped. But Kinnen (Clark) has been a really good coach and has helped me a lot.”

For the second time in as many weeks, Isaac Larsen nearly anchored Sky View’s 4x100 relay team to a come-from-behind victory. Larsen, Titan Saxton, Jackson Sundstrom and Walter Collins clocked in at 43.69, which was a mere .11 slower than the champions from Stansbury.

It was a memorable finale for Sky View’s Trey Nyman, who earned medals in three individual events. The senior placed fifth in the 300 hurdles (personal record time of 41.08), tied for fifth in the high jump (6-2) and was sixth in the 110 hurdles (15.81). The standout football player had only dabbled with hurdling before this season.

“To finish it off, it’s a little bittersweet,” Nyman said. “I mean, I ended up doing a lot better than I expected, but it’s the end, so I’m kind of sad that way. But I’ve had a great time. It’s been a great season.”

Chase Robison scored a point for the Bobcats by finishing eighth in the javelin (154-9).