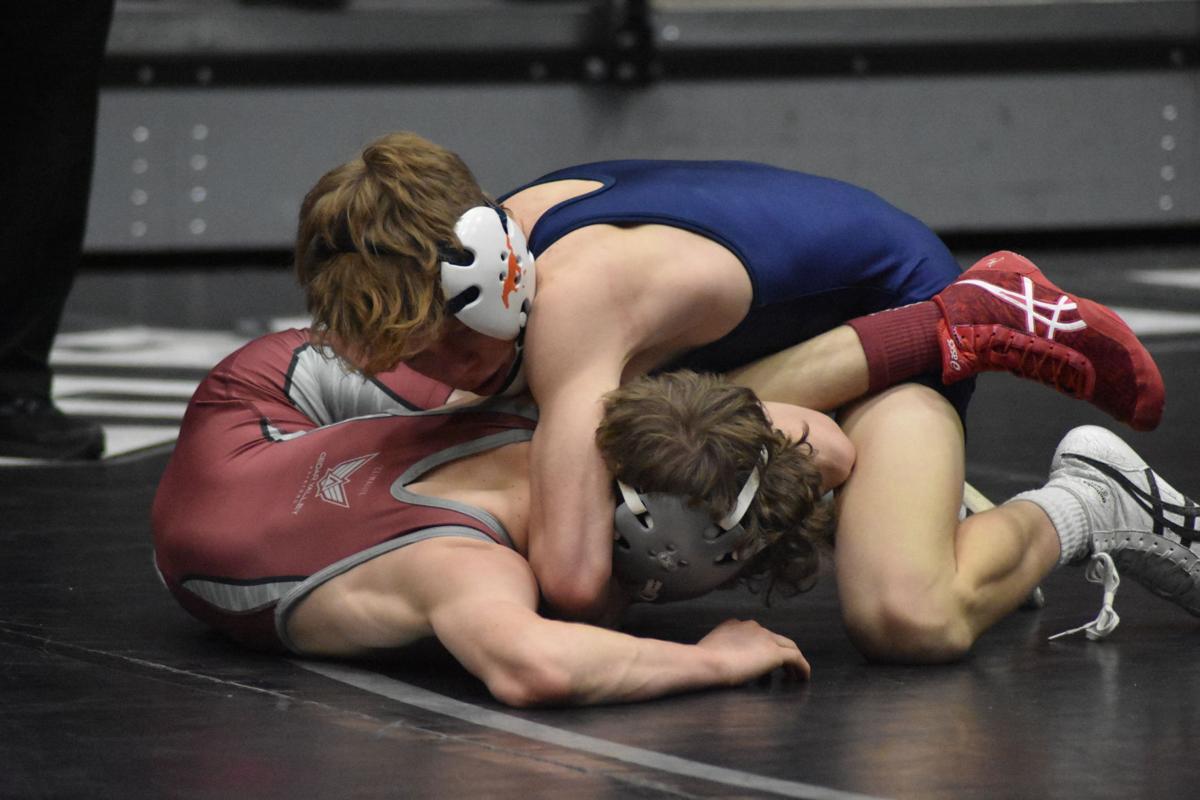 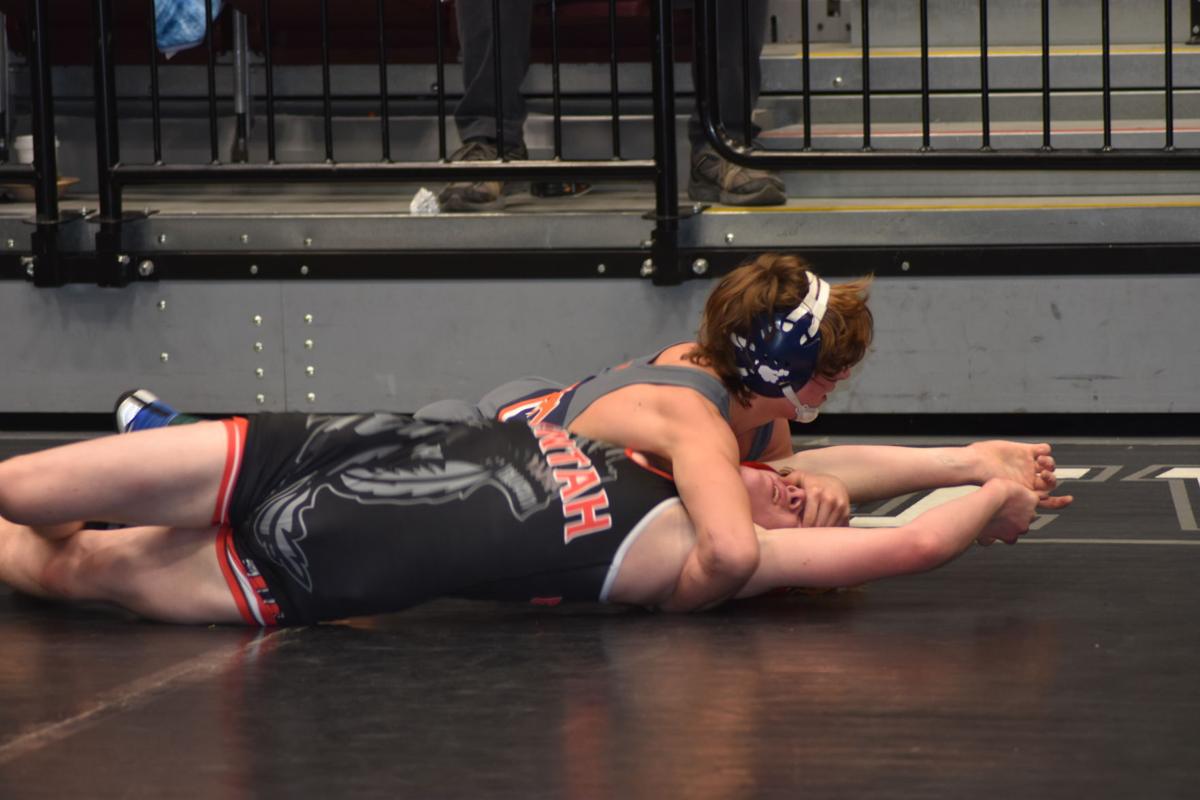 Mountain Crest’s Terrell Lee flattens out his opponent from Uintah at the 4A Boys State Wrestling Championships last Saturday in Richfield.

Mountain Crest’s Terrell Lee flattens out his opponent from Uintah at the 4A Boys State Wrestling Championships last Saturday in Richfield.

For the second straight year, Mountain Crest has continually proven it has one of the best boys wrestling teams in the state regardless of classification.

Uintah can also legitimately make that same claim and, unfortunately for the Mustangs, the Utes were just a little bit better Saturday in Richfield.

Uintah showcased enough star power and depth to rally past Mountain Crest at the 4A State Championships, which were contested at the Sevier Valley Center. In the process, the Utes were able to prevent the Mustangs from defending their title.

Uintah finished with five champions and 16 medalists en route to racking up 332.5 points, while Mountain Crest handily claimed the runner-up trophy with 295 points. Bear River was able to hold off Ridgeline to third place, 172.5 to 158, while Green Canyon was seventh (101), Sky View 17th (seven) and Logan 19th (five).

It was also a memorable day for Ridgeline’s Ronan Melani, who dominated the competition at 195 pounds — just like he did at divisionals. The junior was leading Carson Hansen 8-0 in the second round in the finals before catching and pinning his foe from Snow Canyon in a cradle.

Melani won all of his other matches by at least seven points.

“It felt great,” said Melani, who was one win away from advancing to the placement rounds a year ago. “I’d been working for this moment since state last year, working every day to better myself, and it feels amazing to see that all my hard work paid off.”

Likewise, it was sweet redemption for MC’s Evans and Sanders. Both grapplers lost in the championship round last year, but were not about to be denied this time around.

Evans didn’t get taken down in any of his four matches, including in the finals against returning state consolation champ Parker Hansen of Tooele. The sophomore was the aggressor throughout the bout and dispatched of Hansen in the finals, 5-0.

“Getting beat in the finals last year was hard,” Evans said. “I remember sitting in the stands and telling myself I didn’t want to feel that kind of disappointment again. I went to work immediately, putting myself in front of the best coaches, and started working on things I needed to improve.”

Evans’ night got even better a little bit later as he watched his older sister, Hanna, capture a state title in the inaugural 4A girls tourney. Hanna helped propel the Lady Stangs to a runaway win in the team competition.

“When Hanna won here match, I was so relieved and so excited for her,” said Easton, whose sister echoed the same sentiments. “She has worked so hard. Hanna and I have spent hours training together this season. In preparation for the state tournament, we have been staying after practice and fine tuning our skills. Hard work pays off. It is a unique opportunity for a brother and sister to be wrestling state champs. I am so thankful for the opportunity to share the stage with my sister. It made my own state championship that much sweeter.”

Gabe Sanders’ dominant junior season culminated with a 9-2 victory over Ridgeline’s Brenden Gessel in the finals. Sanders took control with a five-point throw in the first round.

The two-time state champion only lost once the entire season and it was to a future Division I wrestler from Colorado. Sanders won two of his other matches at state by fall and the other by major decision, 10-0.

“I had never felt the kind of disappointment I felt after losing that state finals match last year,” Sanders said. “I knew I had to come back this year and made sure that didn’t happen again by putting in the work. My mindset was different, I was more determined than ever and it showed on the mat.”

Unfortunately for the Mustangs, the Sanders brothers will not be back next season as their family is moving back to Iowa.

“It’s been a great run at Mountain Crest,” Gabe said. “Those guys are my family and I can’t say enough good things about my teammates and coaches. Couldn’t ask for better. We have a lot to be proud of and we all make each other better. I’m looking forward to getting back to Iowa with my family and friends, but I owe a ton to the Mountain Crest room and the better wrestler my time there has made me.”

Larsen reigned supreme in his first three bouts by fall or technical fall and then put together an impressive performance in the finals against Green Canyon’s James Shumway, who is a two-time state runner-up. Larsen executed a pair of early takedowns in each of the first two rounds and never looked back in a 14-4 win.

The sophomore, who recorded a takedown and a two-point tilt in the third round, improved to 3-0 against Shumway this season in the process.

“People fold if they can’t do their moves and wrestle their match, and I didn’t want Shumway to have the slightest hope he could beat me,” Larsen said when asked about the importance of starting rounds strong.

Mountain Crest’s other two finalists, Cooper Sanders and Smith, ran into red hot opponents from Uintah in the championship round. Cooper Sanders squared off against fellow returning state champ Brady Merkley and only trailed 4-0 late in the second round. Merkley only lost once this winter.

The Mustangs had four athletes place third in their respective weight class in Luke Schroeder (120), Terrell Lee (138), Jordan Wakefield (152) and Hunter Hammer (195). Lee got his revenge against Hurricane’s Tristyn Dennnett — who beat him at divisionals — in his third-place duel, while Hammer outpointed a pair of highly regarded foes.

The Mustangs had a tourney-best 12 semifinalists.

It was a memorable tournament for Ridgeline, which had five semifinalists, two finalists and eight placers. Kaden Kirk (170) and Daimiem Boehme (285) captured consolation titles for the Riverhawks — Kirk with an impressive effort against All-Star Duals participant Landon Cabral of Bear River, and Boehme in pinning fashion in his third-place bout.

“I feel like this was a great weekend for Ridgeline,” Melani said. “This is the best we’ve done at state since I’ve been here and I feel like it shows us that even though we’re a relatively new school, we can still keep up with the competition and put some numbers on the board.”

Green Canyon was a couple of wins from finishing in the top five. In addition to Shumway — who pinned renowned Uintah wrestler Cole Huber in the semis for the second consecutive year — the Wolves were represented in the finals by Mason Morris (138) and Garrett Herzog (285).

Herzog pinned his first three opponents, while Morris stuck his first two foes, plus earned a big 5-1 win over MC’s Lee, who was a finalist last season. Morris, who like Herzog faced a very good wrestler in the finals, finished his prep career as a three-time state placer.

Green Canyon’s other medalist was Daxton Darley (fourth, 113), and teammates Aaron Shumway (113) and Luke Blake (182) were one victory away from advancing to the placement rounds.

Sky View’s Kade Croft (132) was also one win away from earning the right to stand on the podium.

Bear River crowned a pair of champions in Trenton Ward (113) and Cael Wilcox (160) and, like Ridgeline, had eight medalists. Kaeson Burn (182) made in to the finals for the Bears.