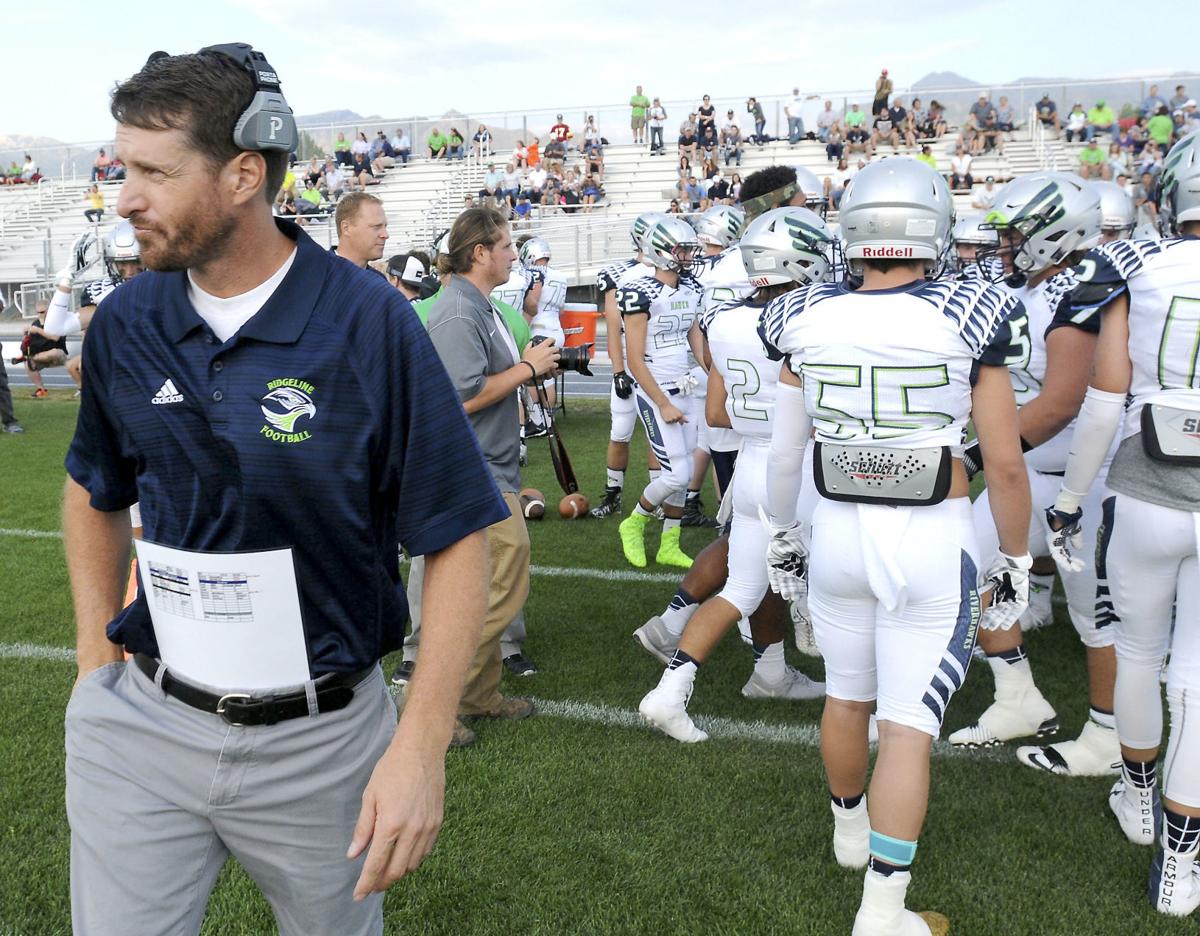 Christopher Howell walks the sidelines of a Ridgeline football game in 2016. Howell is the new head coach at Sky View. 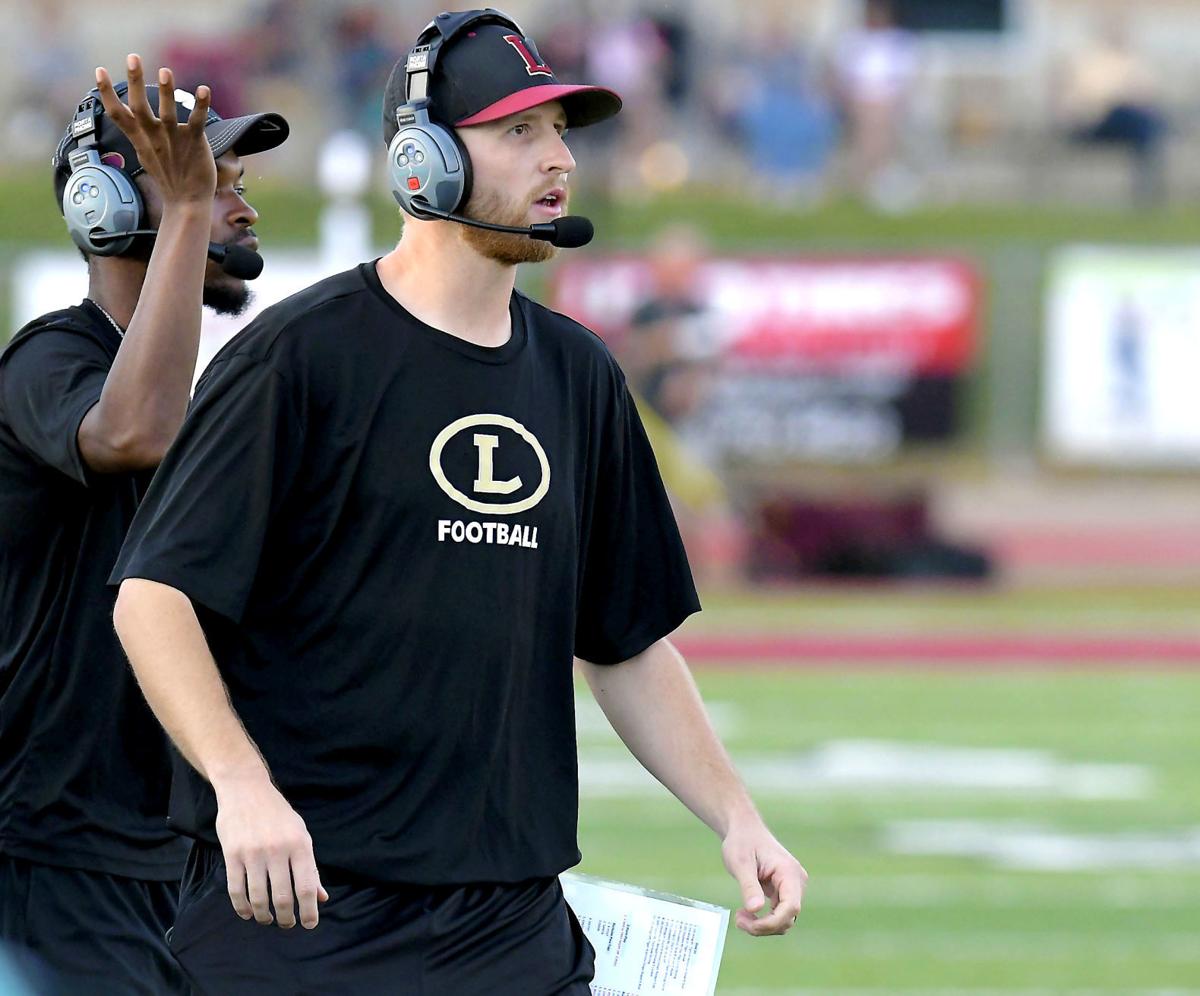 Travis Van Leeuwen coaches Logan in a football game in 2018. The former Utah State wide receiver is now the head coach at Ridgeline.

Christopher Howell walks the sidelines of a Ridgeline football game in 2016. Howell is the new head coach at Sky View.

Travis Van Leeuwen coaches Logan in a football game in 2018. The former Utah State wide receiver is now the head coach at Ridgeline.

Some familiar faces will be on different sidelines when the 2019 high school football season gets underway.

For starters, a pair head coaches from Cache Valley teams have transitioned to rival schools. Former Ridgeline head coach Christopher Howell is back at Sky View, where he was the defensive coordinator for nine years back in the 2000s. Additionally, Travis Van Leeuwen, who spent the 2018 season as Logan’s head coach, has replaced Howell at Ridgeline.

The man now in charge of Logan’s football program is former Cottonwood head coach Bart Bowen, who started his coaching career in 2010 at Mountain Crest. Danilo Robinson, who led Sky View to a 21-2 record and a pair of Region 12 titles during his two seasons at the helm, has returned to his old stomping grounds in Southern California and is now the head coach at South Hills High School.

The opportunity to return to Cache Valley was too good for Bowen to pass up. The Box Elder County native fell in love with this area while earning his bachelor’s degree in health education at Utah State University.

Bowen had spent the previous two years as Cottonwood’s head coach. The former Bear River player was an assistant coach at Kearns High prior to his stint at Cottonwood.

“You know, this has kind of been a dream of mine since I started coaching and graduated from college,” Bowen said. “I never wanted to leave Logan. I tried to find a job here, but it was kind of right in the peak time where very few teachers were retiring. And so I had to make some money and went down to Salt Lake, and for the last eight years I’ve been keeping track and looking and seeing when the jobs down here were opening up.”

In addition to manning the head coaching position at Logan, Bowen will teach physical education, health and history classes at the school. Bowen minored in history at USU.

The Grizzlies will employ a 4-2-5 is their base defense under Bowen. Offensively, “we’re kind of a multi offense,” Bowen said. “We’ll line up in spread looks, and then we’ll line up in some pro-style, off-set fullback type stuff.” Bowen’s primary offensive strategy will be to “try and take advantage of what the defense is going to give us.”

What should Grizzly fans expect from a Bowen-coached team?

“The biggest thing is we’re disciplined,” he said. “We talk about the importance of being a good person. Good kids make great football players. We’re up-tempo on offense. We play assignment sound and we try to get the ball to our playmakers, and luckily we have quite a few playmakers on our team this year, so it’s kind of on me to get them the ball.”

Bowen, who was a player on Bear River’s 2003 state title winning team, is looking forward to being much closer to home. He and his wife, Megan, have a pair of children, ages 5 and 2.

“I know that the (Logan) community is pretty tight nit, and I was excited to get closer to working within the community I coach in,” said Bowen, who used to teach at a junior high school in Kearns. “When I was at Cottonwood, I lived in Lehi, so I was about 21 miles away from the high school. And so I kind of felt disconnected and it was a lot of driving, and now we’re two miles from the high school. And I feel like I’m a part of the community now and I can contribute back to that more so than just coaching.”

“We’re pretty lucky to get those guys,” said Bowen, who got to know current Logan principle Kenneth Auld when both men were working at Kearns High.

The Logan native is going to miss his time at Ridgeline, but is ecstatic to return to Sky View. Not only was Howell a long-time assistant football coach for the Bobcats, he was their head baseball coach for five years.

“It’s really exciting,” Howell said. “Honestly, it’s kind of a dream come true to be back where I started, but it wasn’t the plan at all. When I came to (the valley to coach) at Ridgeline, I kind of understood that at that point it would probably be off the table. And then when Danilo decided to leave and go back to California, it opened up that possibility, and I have a lot of really close relationships (at SV). And yeah, it just worked out.”

This will be Howell’s third head coaching stop as he was in charge of the program at Star Valley (Wyoming) High before becoming Ridgeline’s first head coach.

In his eight years at Star Valley, Howell led the Braves to a pair of appearances in the 3A state championship game. Star Valley went undefeated in 2015, which was Howell’s final season at the helm. The Braves went a combined 42-35 during Howell’s time in The Equality State.

During Howell’s three years back in the valley, Ridgeline posted a combined record of 19-15. The Riverhawks advanced to the quarterfinals of the state playoffs in the former Logan High star athlete’s first two seasons.

“It was fun to be a part of that process of starting from scratch at Ridgeline,” said Howell, who will teach physical education and history classes at Sky View. “That first year I was there, we didn’t even have a field that whole first summer. We held summer camp and, in fact, the first two weeks of practice at Nibley Elementary. We didn’t have any place else to go and, in fact, our lower level kids played their first games at South Cache because our field still wasn’t ready, and so all that was kind of crazy at the time, but now as I look back it was really fun to go through. But it was a good experience. There’s some great kids at Ridgeline and they really embraced the opportunity to start that (program) from scratch.”

Howell, who earned bachelor’s and master’s degrees at USU, also served as Ridgeline’s athletic director during the 2017-18 and 2018-19 academic years. He will be replaced in that capacity by former Logan AD Mike Hansen.

“You know, some of that stuff I really enjoyed, as far as getting to know a lot of the kids that weren’t a part of the football program,” Howell said of being an AD. “... But it’s nice to have less to do. You know, the winters are really hard when you’re trying to run an offseason weight program and then trying to be at basketball or wrestling. There’s something pretty much every night during the winter and it’s just challenging.”

Howell is really excited to be reunited with Sky View offensive coordinator Perry Christensen, who not only coached Howell at Logan High, but was “the first person to give me a chance to be a coordinator as I got started coaching football a long time ago.”

The former USU wide receiver shined in his lone season at Logan, which was also his first year as a head coach. The Grizzlies went from winning two games in 2017 to finishing second in the region standings a year ago.

However, when the Ridgeline position opened up, it was too “enticing” for Van Leeuwen to pass up.

“I will say that when the job opened up, it was a tough one not to take when (the opportunity) presented itself,” said Van Leeuwen, a former assistant coach at Sky View. “You know, when my wife and I first moved back into the valley a few years ago, Ridgeline was new ... and I always joked around with my wife. I was like, ‘Man, that’s a pretty sweet school right there. That would be so fun to be able to coach there.’ And lo and behold, the opportunity presented itself, and on top of that it just felt right.

“It was really tough leaving the players behind at Logan because I had built such great relationships with them, but looking at it from a standpoint of being able to do this long-term, it just made sense to me. ... I’m excited for what’s ahead of us and we’re hoping to make some big things happen here in the future.”

Van Leeuwen will be reunited at Ridgeline with Hansen, Logan’s long-time athletic director who, like his football coach, elected to change schools. Having already developed a relationship with Hansen made for “a smooth transition” for the former Timpview High standout.

“I will say that I absolutely loved working alongside Mike while he was at Logan and I was at Logan,” said Van Leeuwen, who will also teach physical education at Ridgeline. “There’s not another AD I would rather work alongside than him.”

In his only season at Logan, Van Leeuwen spearheaded a potent and pretty balanced Grizzly offense that averaged 32 points per game. He also served as Logan’s offensive coordinator.

Van Leeuwen learned a lot of things during his first season as a head coach, including how to be efficient at handling the “administrative side of things.” What else did he learn?

During his four seasons playing for the Aggies, Van Leeuwen hauled in 95 receptions for 1,189 yards and six touchdowns. As a senior, he ranked second on the squad in catches (52) and receiving yards (661).