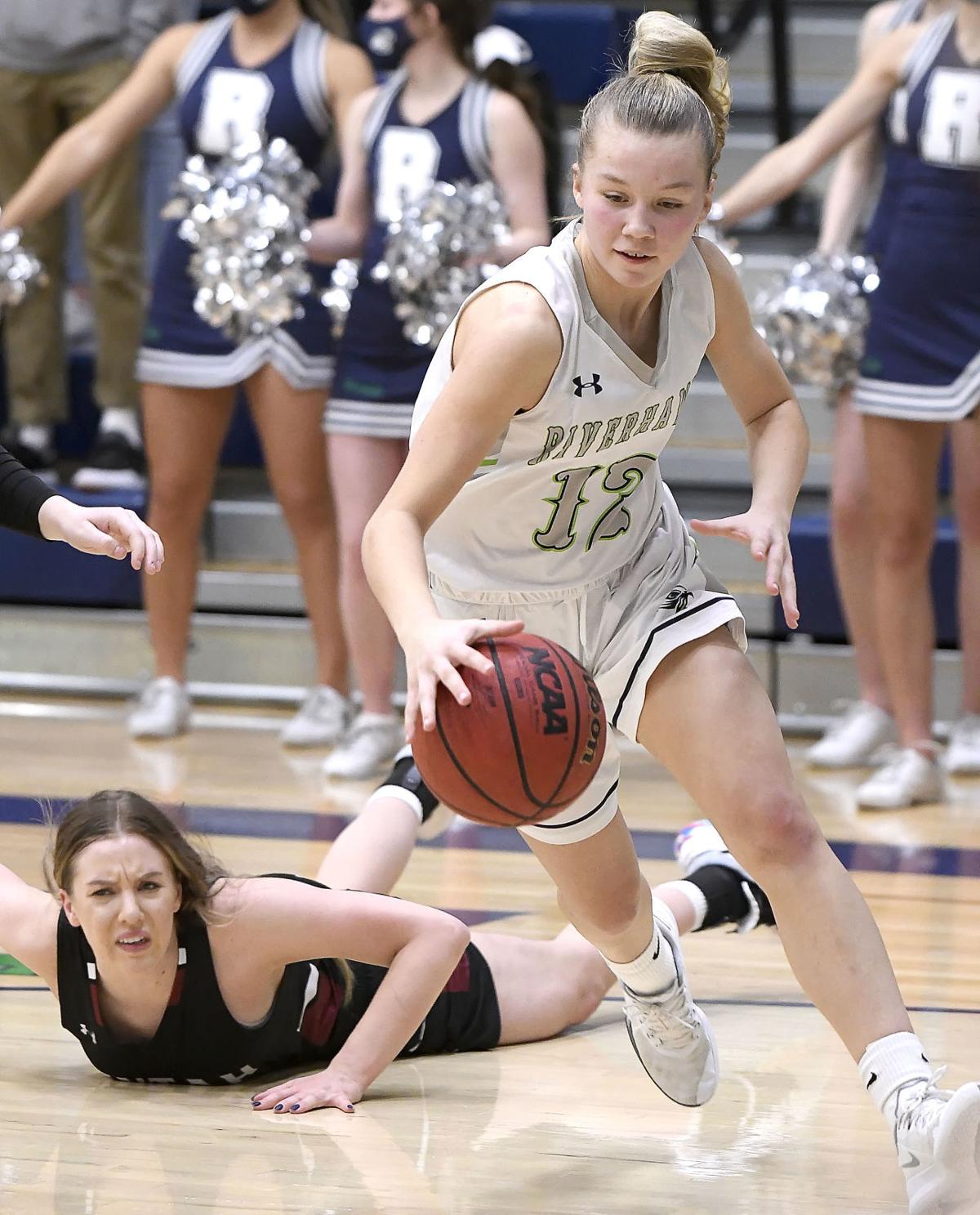 Ridgeline’s Elise Livingston (12) dribbles the ball after going past Uintah’s Kyra Putnam on Friday in Millville. 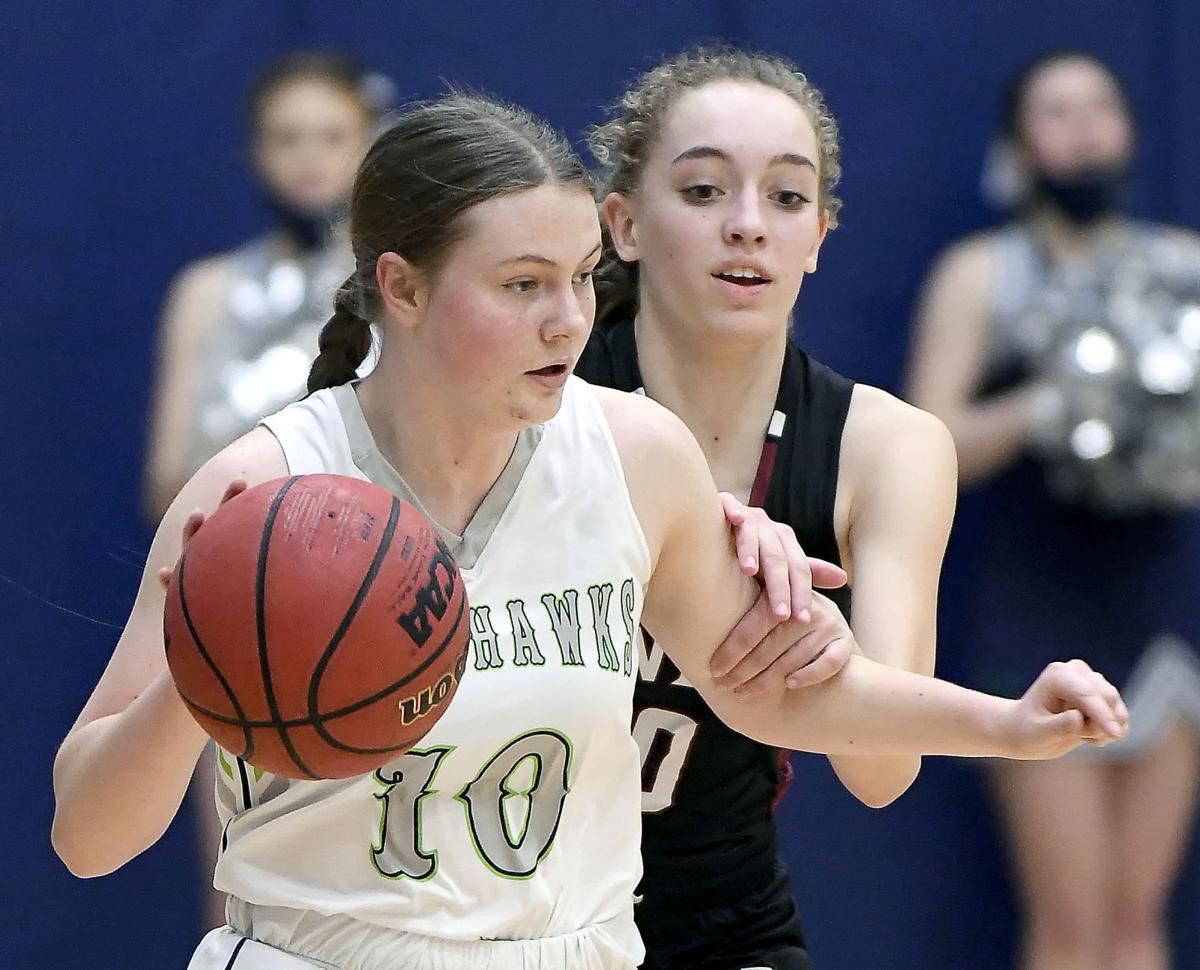 Uintah's Jordan Woodford grabs the arm of Ridgeline's Paige Dahle as she brings the ball down the court on Friday in Millville.

Ridgeline’s Elise Livingston (12) dribbles the ball after going past Uintah’s Kyra Putnam on Friday in Millville.

Uintah's Jordan Woodford grabs the arm of Ridgeline's Paige Dahle as she brings the ball down the court on Friday in Millville.

MILLVILLE — After missing their first six shots, the Riverhawks started finding the bottom of the net.

That was bad news for visiting Uintah in the second round of the 4A State Girls Basketball Championship Friday evening. Ridgeline outscored the Utes in each of the first three quarters and advanced to the quarterfinals with a 52-43 win.

“Uintah used that zone and it gave us some struggles, but the girls did a good job playing intense defense,” Riverhawk head coach Ainsli Jenks said. “I wasn’t upset with some fouls. That’s what happens when you get to state. It’s a little more physical.”

Ridgeline (15-7) only has two seniors and Haley Anderson played with foul trouble for most of the contest before fouling out with 24 seconds to play. Sarah Litchford injured a knee last week and saw action off the bench, but was limited on minutes.

Still, Anderson did her part as a leader with a team-best 15 points, five assists, five steals and four rebounds.

“Sometimes I’m a little hacker,” Anderson said with a laugh. “I just couldn’t help myself.”

When Litchford did come in, she made her presence felt. The senior had seven points, six rebounds, three assists and two blocked shots.

“We have to be careful with Sarah,” Jenkins said. “It’s a deep bone bruise, so she is playing limited minutes. She is a tough kid.”

The Riverhawks had plenty of big plays from the youngster. Freshman Macie Brown netted 12 points and grabbed a game-high seven rebounds. Fellow freshmen Paige Dahle and Elise Livingston chipped in eight points each.

“They may be young, but they always come out with intensity,” Anderson said of the freshmen. “They have played together for a long time. They always step up when they need to and do a great job.”

Ridgeline had 13 assists on 17 made field goals for the game.

“When you share the ball, it makes it hard to defend because you never know who is going to take the shot,” Jenkins said. “I thought Haley did an incredible job tonight looking for that extra pass. That’s what got us going, then she puts buckets in.”

The Utes (8-14), who made the trip to Cache Valley from Vernal, were led by Kenna Gardiner with a game-best 20 points. She was the lone Uintah player to reach double figures.

Uintah took an early 3-0 lead as Ridgeline was cold from the field. After three lead changes, the Riverhawks scored the final five points of the opening quarter to take a 11-9 lead into the second quarter.

“I was proud of the girls hanging in there,” Jenkins said. “There were a few times where we really showed some grit.”

Litchford scored the first bucket of the second quarter to keep the hosts in front. Ridgeline would lead the rest of the way. Brown had five points in the second as Ridgeline took a 23-19 lead into the break.

“There was a lot more intensity in this game and it took us a while to adjust to the physicality out there,” Anderson said. “I thought we did a good job staying composed.”

The Riverhawks busted the tight game open to start the third quarter. The hosts went on a 9-0 run as four different players scored. Dahle drilled a 3-pointer off a pass from Litchford to give Ridgeline a 32-19 lead.

A trey by Brown and free throw by Dahle when the Uintah coach was hit with a technical gave the Riverhawks their largest lead of the game, 36-21, with 3:16 left in the third.

Ridgeline took a 36-25 lead into the fourth. The Riverhawks made 6 of 10 fouls shots in the final period to secure the win.

Now Ridgeline is off to Richfield for the final games of the state tournament. The Riverhawks will play region foe Sky View. The Bobcats and Riverhawks split games during the regular season.

“We’re excited to go to Richfield,” Jenks said. “It will be fun. We are excited for the chance to go there and play.”

Ridgeline bounced back from a regular-season ending loss to win Friday. The Riverhawks are familiar with the playoffs having reached the championship game in 2019.

“We just need to take it one game at a time,” Anderson said. “We need to give it our all every game because you don’t know if it will be your last one.”

A little further north in Smithfield, Sky View was taking care of Cedar Valley, who hail from Eagle Mountain.

The Bobcats (15-6) outscored the Aviators (11-11) in every quarter and broke a tight game open in the second quarter.

“The first quarter was a battle,” SV head coach Vanessa Hall said. “Cedar Valley is a tough team that can shoot the ball well. The second quarter we settled down and we’re able to push the ball up the court and get into our offense.”

Sky View took a 9-7 lead after the first quarter. The Bobcats built that advantage into a 28-15 lead by halftime. Gracie Rigby had seven of her game-high 14 points in the second period.

“We were happy with how our girls responded in the second half with the defensive adjustments we made at the break,” Hall said. “In the second half, we were able to contest more shots. Overall, it was a great team win.”

Sky View continued to grow its lead in the second half and took a 43-22 lead into the final quarter.

The Bobcats head to Richfield having won six of their last seven. This is the furthest they have made it at state since reaching the semifinals in 2017.

Amber Kartchner was honored as a McDonald’s All-American after she went out and dominated No. 12 Canyon View (10-14). The senior finished with 27 points and 11 rebounds.

“It’s a big deal,” Logan head coach Morganne Madsen said. “It shows that people who put in the work can be recognized. I’m really proud of her, especially because Amber is the type of player who puts in the work to be the best she can be, compete and win. She does a lot of little unseen things and lifts her team up.”

Taylor Rose chipped in with 17 points for the Grizzlies, who got eight points and seven assists from Alec Kennington. Rose knocked down a pair of timely 3-pointers, Madsen said.

Up next for No. 5 Logan (15-5) is a quarterfinal matchup against region rival Bear River. The 13rd-seeded Bears stunned Green Canyon on the road.

Bear River outscored Green Canyon 16-10 in the second quarter and was able to hold off the No. 4 Wolves, who swept the Bears during the regular season.

“I’m proud of the our girls and how they battled tonight,” GC head coach Alexis Bird said. “Things obviously didn’t go our way, but our girls never gave up. I am so proud of this team and especially the seniors. They have given us so much these last four years and we love them so much.”