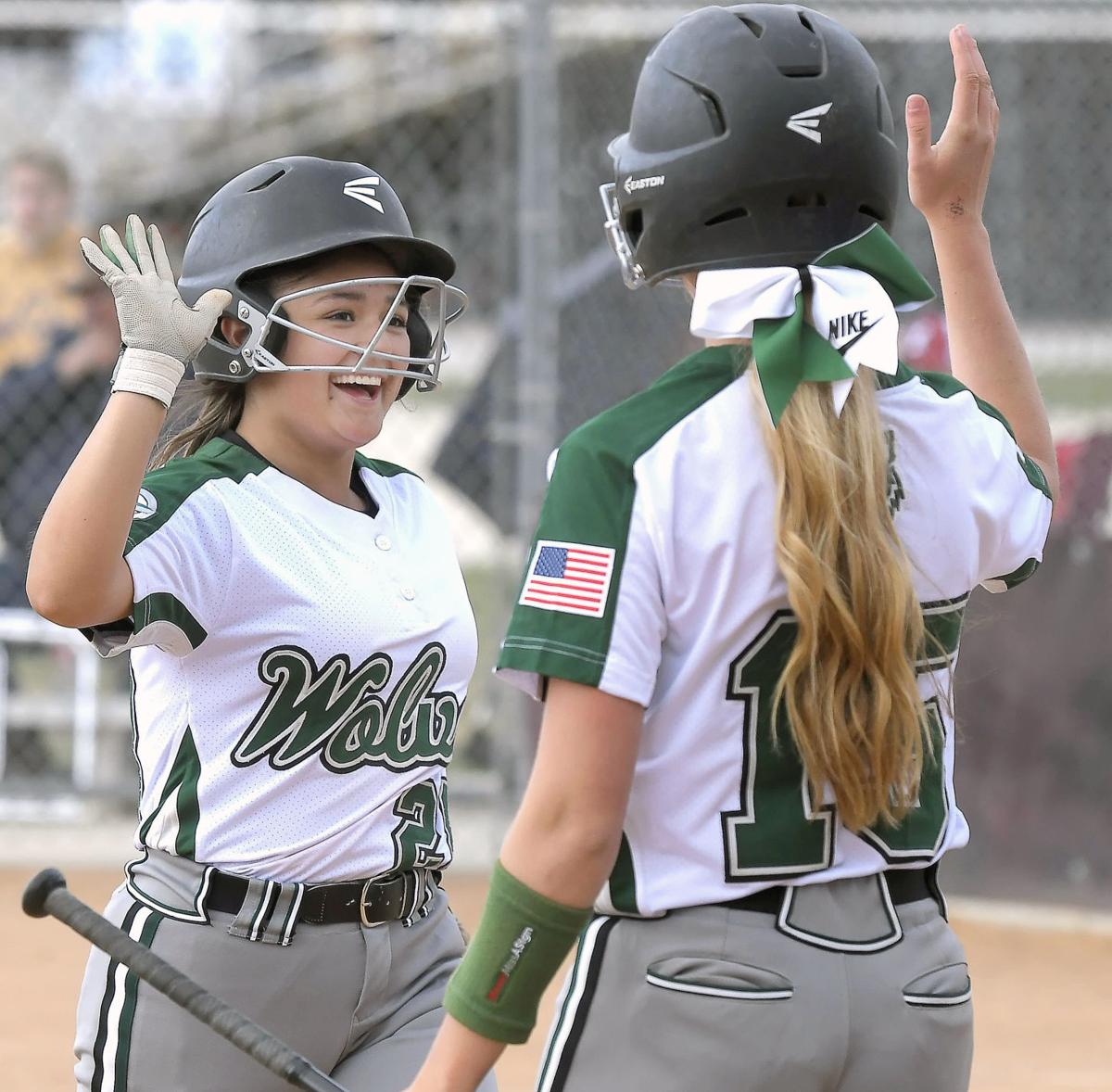 Green Canyon’s Jentry Nava celebrates with Madi Peterson after scoring a run against Logan on Friday in Logan. 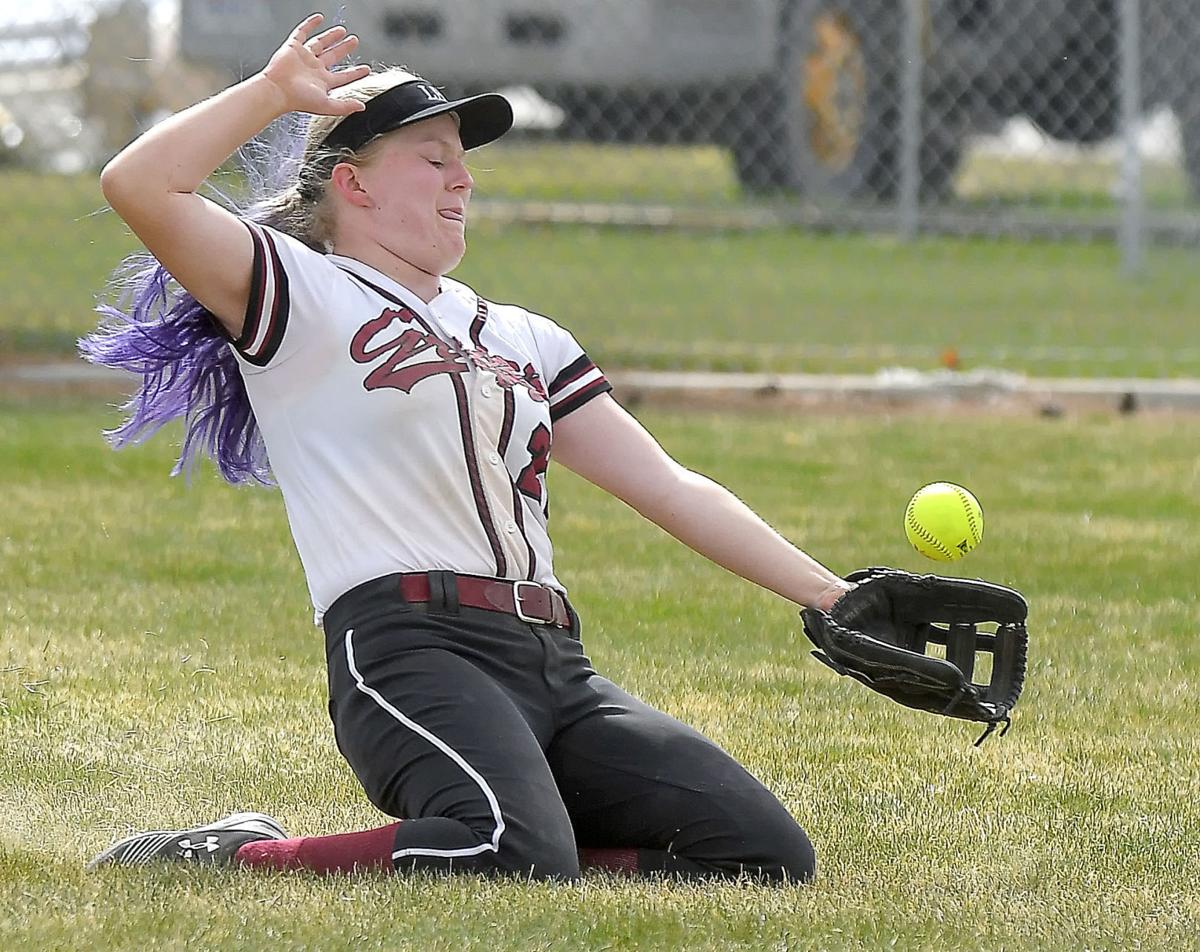 Logan’s Sophie Bodily dives for a fly ball against Green Canyon on Friday in Logan. 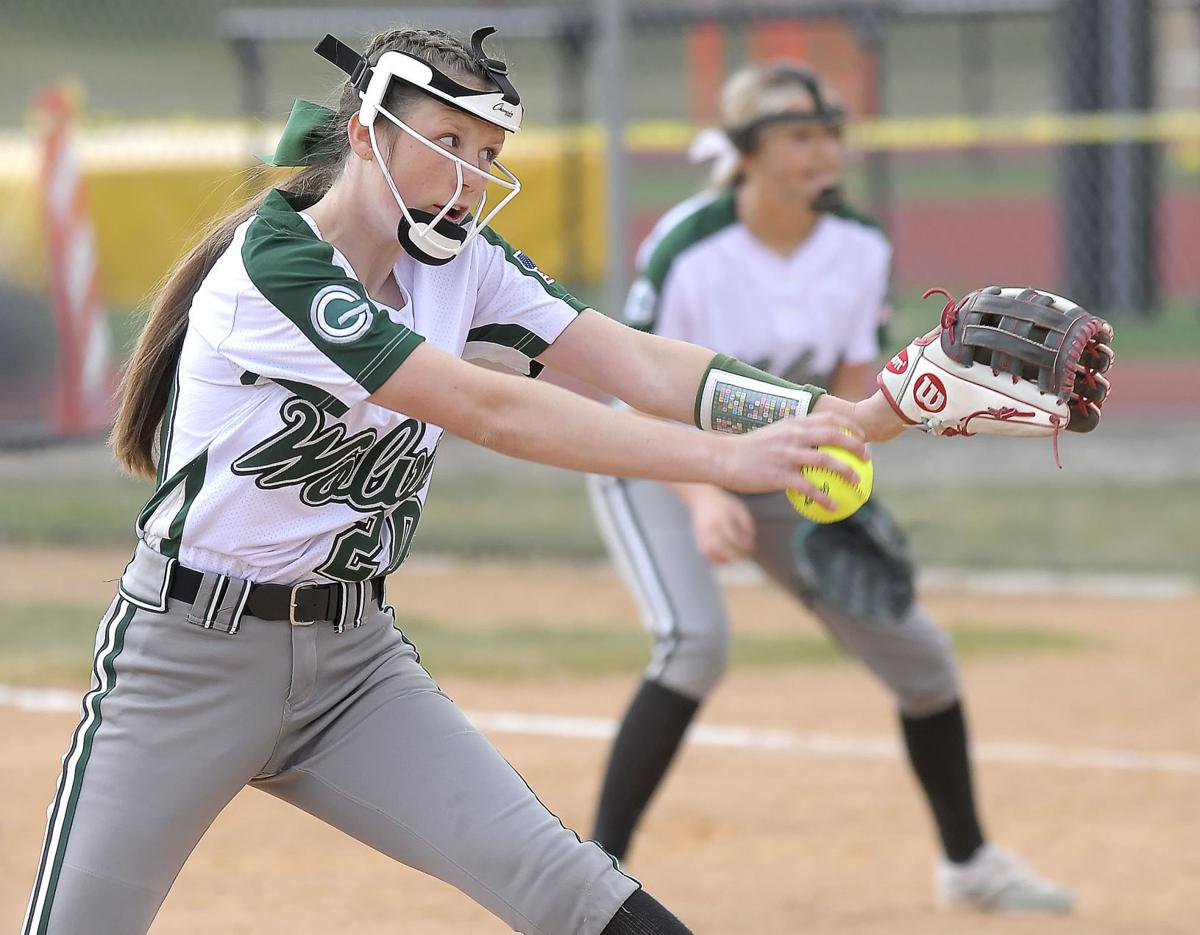 Green Canyon's Rylee Ericson pitches the ball to a Logan batter on Friday in Logan.

Green Canyon’s Jentry Nava celebrates with Madi Peterson after scoring a run against Logan on Friday in Logan.

Logan’s Sophie Bodily dives for a fly ball against Green Canyon on Friday in Logan.

Green Canyon's Rylee Ericson pitches the ball to a Logan batter on Friday in Logan.

Playing with less pressure was the plan, and the Wolves did just that Friday afternoon.

Green Canyon hit the ball better than its last outing on Tuesday and was nearly perfect in the field against Region 11 foe Logan. That added up to a 15-0 win in five innings for the Wolves against the Grizzlies.

“We were playing more laid back,” said GC first baseman Kennedy Conan, who was 4 for 4 at the plate. “We didn’t come out all frantic like, wanting to win. We just wanted to play good, and I think that helped us. This was more fun than any of our other games.”

The Wolves (6-12, 2-5 region) used 10 batters in the game and every one of them scored at least one run. Seven Green Canyon players recorded at least one hit.

“It takes everybody,” Wolves head coach Joe Astle said. “Our theme for the year is ‘Be One.’ It takes all nine of them on the field. Today they took that to heart and made things happen. It was pretty impressive.”

Green Canyon finished with 12 hits and committed just one error in the five-inning contest. The Wolves got a solid effort from starting pitcher Rylee Ericson, who allowed four hits to the Grizzlies (1-18, 0-7). Ericson struck out three and issued one walk in the shutout win.

“After the last game I told them I can only do so much as a coach and they need to figure some stuff out,” Astle said. “They got together and I wasn’t involved in it. After they got done talking, they were all smiling. I figured they had things worked out and they came out today and proved that. It’s about team.”

Logan had some runners in scoring position, but could not get them home. The Grizzlies also didn’t help their own cause as they had seven errors.

“We’ve had a rough couple of weeks, so our goal was to make this game different,” Logan head coach Lexi Hatch said. “We had fewer errors, more hits and a better outlook for this game. We are headed in the right direction.”

Green Canyon prevented the Grizzlies from denting the scoreboard with several head-up plays. Logan’s Kaylie Peterson led off the bottom of the fourth with a double, but was thrown out stealing third by Wolves catcher Morgan Gittins. Then in the fifth, Sami Petersen singled to start the inning, went to second on a wild pitch and stole third. The throw to third was high, so Petersen tried to get home, but GC left fielder Mcall Kaae fielded the loose ball and threw home, where Gittins made the tag.

“Morgan, our catcher, has been awesome this year,” Astle said. “She has done a great job throwing people out and being more confident. Mcall, our left fielder, the same thing. They are not afraid to throw, which is good.”

The Wolves plated a run in the first and five more in the second as the Grizzlies had three errors over the first two frames. Conan led off the second with the first of her two doubles in the game. She scored on a two-run single by Hadlee Harris. Annika Eborn had an RBI triple for the Wolves in the second.

“This was a good game for us,” Conan said.

Heading to the top of the fifth, Green Canyon held a 6-0 lead. Logan would end up committing four errors in the fifth, and the Wolves took full advantage as they had six hits in the frame. An RBI single by Conan capped the scoring and completed a perfect game for the sophomore in the batter’s box.

“Kennedy is a great hitter,” Astle said. “She is going to be a force to be reckoned with.”

“We had a positive mindset coming into this game,” Conan said. “We have nothing to lose.”

Abbey Hart, Peterson, Sami Petersen and Maya Jacome each had a hit for the Grizzlies. Mak Graves went the distance in the circle, striking out five and not issuing a walk.

In other region action, Sky View scored early and often to build a big lead and beat Mountain Crest, 12-6. Ridgeline had a lead disappear late in a 6-4 setback to league-leading Bear River.

“We came out flat and Sky View came out firing on all cylinders,” MC head coach Courtnee Maughan said.

The Mustangs surly did.

Skylee Haramoto began the game by walking, then Abbey Cantwell singled. After a strikeout, Cambrie Davis smacked a two-run double to begin the scoring. Three straight singles and two bases on balls had Sky View up 5-0. Haramoto came up for the second time and brought in two runs with a single.

“We had a great win against a good team,” SV head coach Amanda Robinson said. “We came out aggressive in the box and saw great things from the entire lineup. Cambrie did a great job in the circle, and our defense made plays behind her.”

The Bobcats finished with 13 hits and three errors as Haramoto and Davis each had three hits. Davis was a triple short of the cycle. Davis struck out five. Cantwell and Kimber Augustus each had two hits.

Mountain Crest did push across three runs in the bottom of the seventh as Emma Child walked with the bases loaded, followed by a RBI single by Brooklyn Clark and a run by Teagan Hall on a passed ball. The Mustangs were led by Hall and Clark with two hits each.

At Garland, the Riverhawks (14-3, 5-2) held a 4-1 lead heading into the bottom of the sixth inning. The Bears (14-4, 7-0) then proceeded to score five runs in that frame to take their first lead and never relinquish it.

Ridgeline outhit Bear River, 11-9, but also had more errors 2-0. Brinn Anderson had three hits for the Riverhawks, including a triple. Kenzee Hale and Abbie Banning each had two hits a triple as well. Markessa Jensen struck out four.

North of the border, Preston split a doubleheader with district foe Century at Pocatello. The Diamondbacks took the first game, 12-2, in six innings, but the Lady Indians bounced back to capture the second game, 10-6.

In other action, West Side was hanging tough with Malad, but a rough seventh inning helped the Dragons win 10-1.

At Pocatello, Century scored five runs in the bottom of the first and added two more in the second to build the early lead. The hosts tacked on four more in the fourth and finished with 14 hits. Neither team committed an error.

Preston had eight hits for the game and was led by Megan Johnson with two hits, two runs, a RBI and a home run. Kendall Keller and Dru Despain each had two base knocks for the Tribe. Keller went the distance in the circle, striking out seven.

In the second game, it was Preston (7-5) jumping out to the early lead with four runs in the first and another four in the second. That would be more than enough to earn the split.

Once again Johnson led the 15-hit attack by the Indians with three, as she was just a double shy of hitting for the cycle. Vanessa Griffeth also had three hits and scored three time as she hit a home run as well. Rorie Hansen, Charly Bair and Keller each had hits for the Tribe. Bair got the win, striking out four.

At Dayton, Malad built a 4-0 lead before West Side got on the scoreboard in the bottom of the fifth. The Dragons would score six times in the top of the seventh to put the game out of reach. Malad had 12 hits and no errors, while the Pirates had seven errors for the game.

Sparrow had two hits, including a double, and scored the lone run when Paige Comeau singled. The Pirates struck out 13 times.