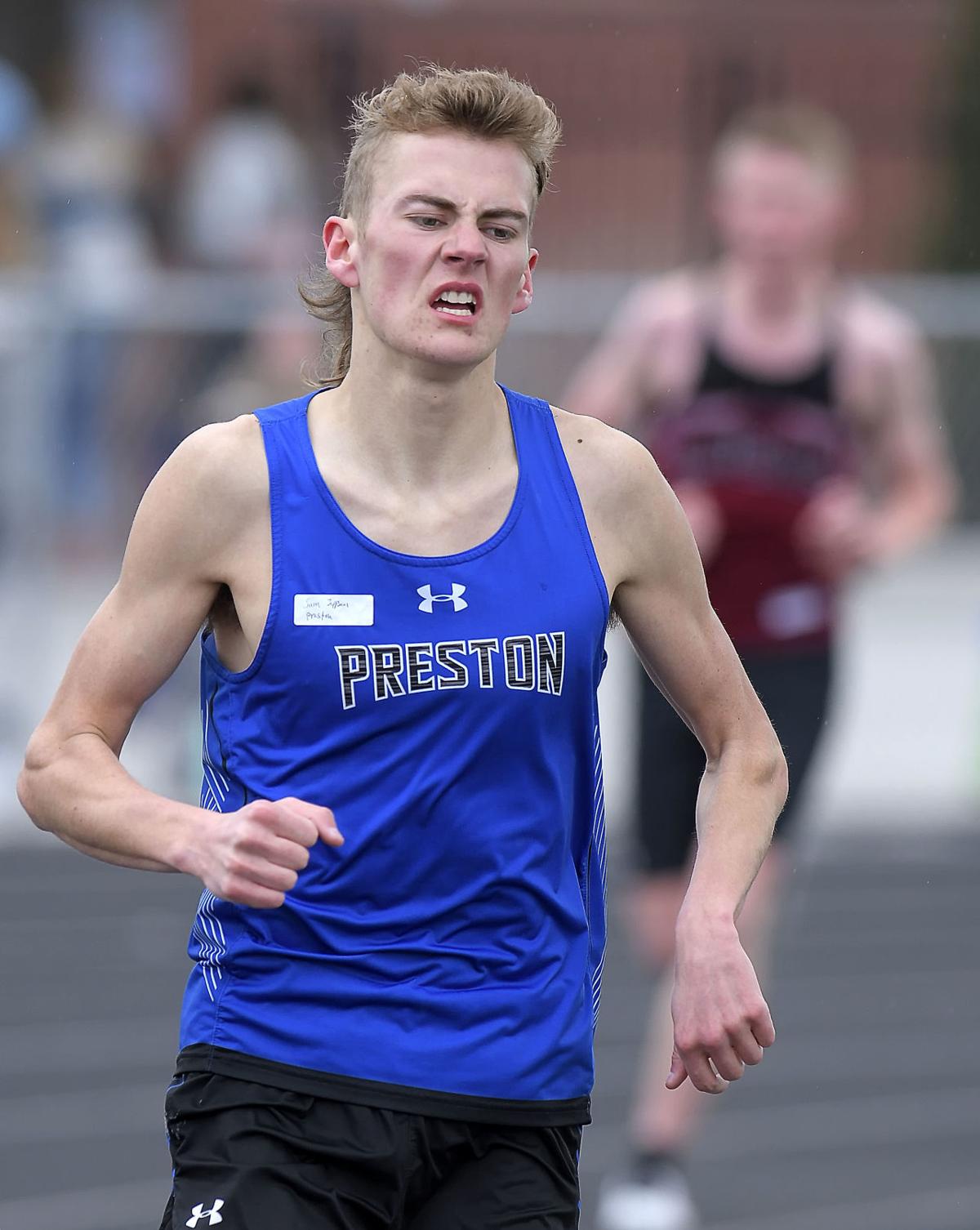 Preston’s Sam Jeppsen competes in the 3,200 meters at the Cache-Box Invitational on Thursday in Millville. 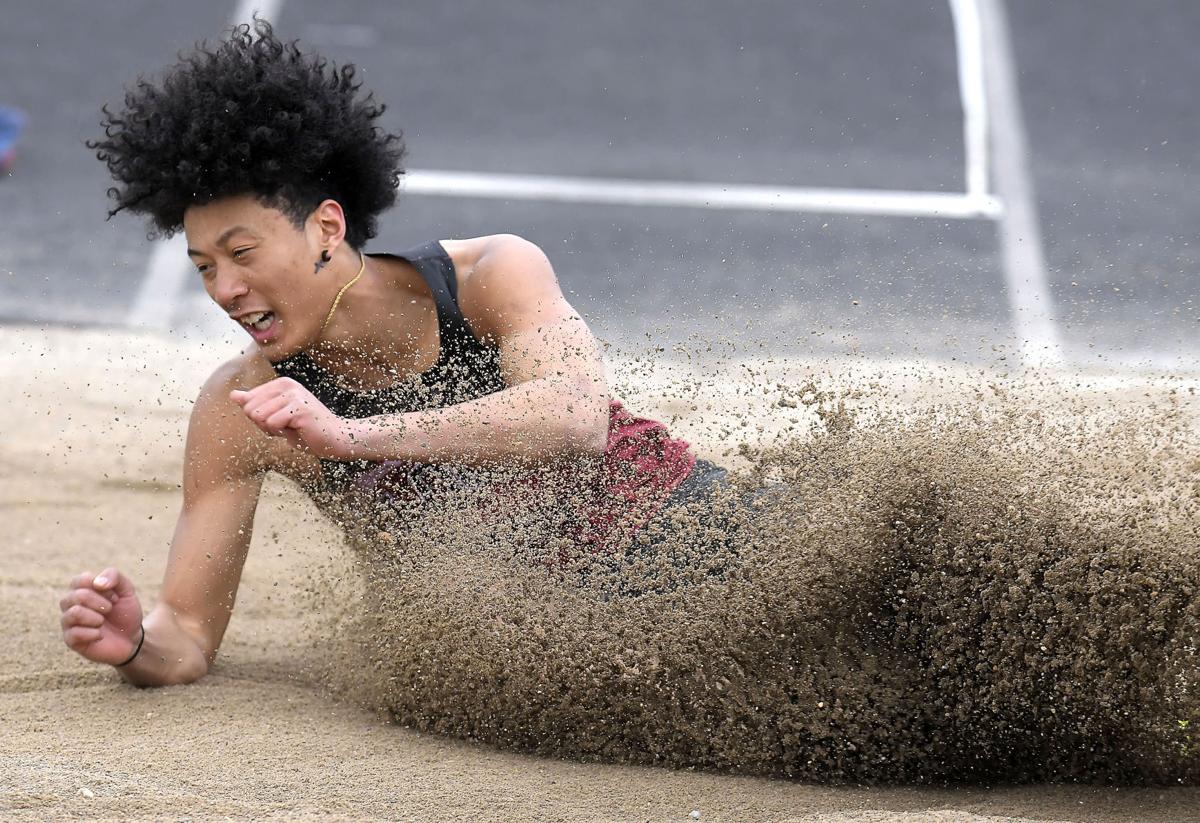 Logan's Jaylen Sargent competes in the long jump at the Cache-Box Invitational on Thursday in Millville.

Preston’s Sam Jeppsen competes in the 3,200 meters at the Cache-Box Invitational on Thursday in Millville.

Logan's Jaylen Sargent competes in the long jump at the Cache-Box Invitational on Thursday in Millville.

MILLVILLE — For the first time in several years, Preston’s boys track & field program was able to field close to a full team at the Cache-Box Invitational, and it paid off for the Indians.

Preston prevailed against a boys field that featured a lot of parity at the annual two-day meet, which concluded on a chilly and sometimes rainy Thursday evening. The Indians racked up 105.5 points, followed by Bear River (99), Sky View (95), Green Canyon (91), Box Elder (88.5), Logan (77), Mountain Crest (60) and Ridgeline (44).

All eight schools won at least one event in a very balanced boys competition, with Preston leading the way with four titles. Bear River and Sky View reigned supreme in three events apiece, while Box Elder and Ridgeline each crowned two champions.

“The boys performed well,” Preston head coach Brandon Lyon said. “Both teams, boys and girls, performed well. Our girls were a little short-handed and the boys also were a little short-handed, so to have the ones that were here step up and compete like they did, especially the distance guys, the relay teams, Brecker (Knapp) and Chuck (Iverson) in the hurdles both scoring points, was huge. We always like to come here and have a good showing, but it’s tough with spring break always falling right around this time.”

Preston was led by three-time all-state cross country performer Sam Jeppsen, who was selected as the Cache-Box boys MVP after winning the 3,200 meters, finishing second in the 1,600 and running legs on a pair of victorious relay squads. The senior put up some strong times in less-than-ideal conditions as he completed the 3,200 in 9 minutes, 54 seconds, and the 1,600 in 4:34.

Additionally, Jeppsen teamed up with Cole Harris, Tristan Lyon and Knapp to win the 4x400, plus anchored the 4x800 squad to the top spot on the podium in thrilling fashion.

Jeppsen passed a Bear River athlete on the final straightaway. Jeppsen was joined on the longer relay by Reynger Davidsavor, Garrett Hale and Luke Visser.

“The meet was way fun,” Jeppsen said. “I love these guys, running with these guys (from Cache County). We only get to do it a couple of times a year, but I love it. And it was just a good day, a good two days, and I feel like I definitely made improvements and I’m really proud of my times. And I’m proud of all the boys out here that pushed me.”

The only athlete who was triumphant against Jeppsen was Ridgeline’s Spencer Adams, and the senior was the only boy to capture a pair of individual event titles. Adams clocked in at 4:30 in the 1,600 and broke the two-minute barrier in the 800 for the first time with his 1:59.75. It was a very competitive 1,600 field as 23 boys finished the race in less than five minutes.

“Like you said, lots of good competition up here at the Cache-Box,” Adams said. “It’s something we always look forward to. It’s fun because at the beginning of the year ... nobody’s in their max shape right now. I’m coming off basketball and the other guys are coming off different things, and so we’re just kind of at the beginning of training, but Cache-Box is just a really fun event. Even with the bad weather, it’s really fun to come out and race against Preston kids and the kids from the region, and just see where everyone is.”

Compton, who is also playing lacrosse this spring, is now his school’s record-holder in the 200 and 400.

“The 200 record was held by one of my really good friends who was a senior last year and he didn’t get to run (because of COVID), so we were always competing when I was in my sophomore year,” Compton said. “So, it was cool just to be able to break one of my friend’s records and I’m looking to get a few more, so it’s been fun.”

It was a solid performance by Sky View, which nearly rallied past Bear River for second place in the final team standings. The Bobcats were led by Trey Nyman, Isaac Larsen and Cody Robbins, who all placed in the top four in two individual events.

Logan’s Jaylen Sargent occupied the top spot on the podium in the long jump (20-11.25), as did Preston’s Taite Priestley in the high jump (6-2). Priestley has been competing with a torn meniscus in his non-jumping foot, an injury he suffered during the basketball season.

Preston’s Knapp was oh so close to claiming titles in both hurdles races as he was outleaned at the finish line on both occasions. The junior ran the 110 in 16.12 and the 300 in 42.37.

There were two exhibition events and both were won by Preston athletes — Paytton Alder in the triple jump (38-3.75) and Benson Palmer in the pole vault (12-0). The TJ and PV are scored events in Idaho.