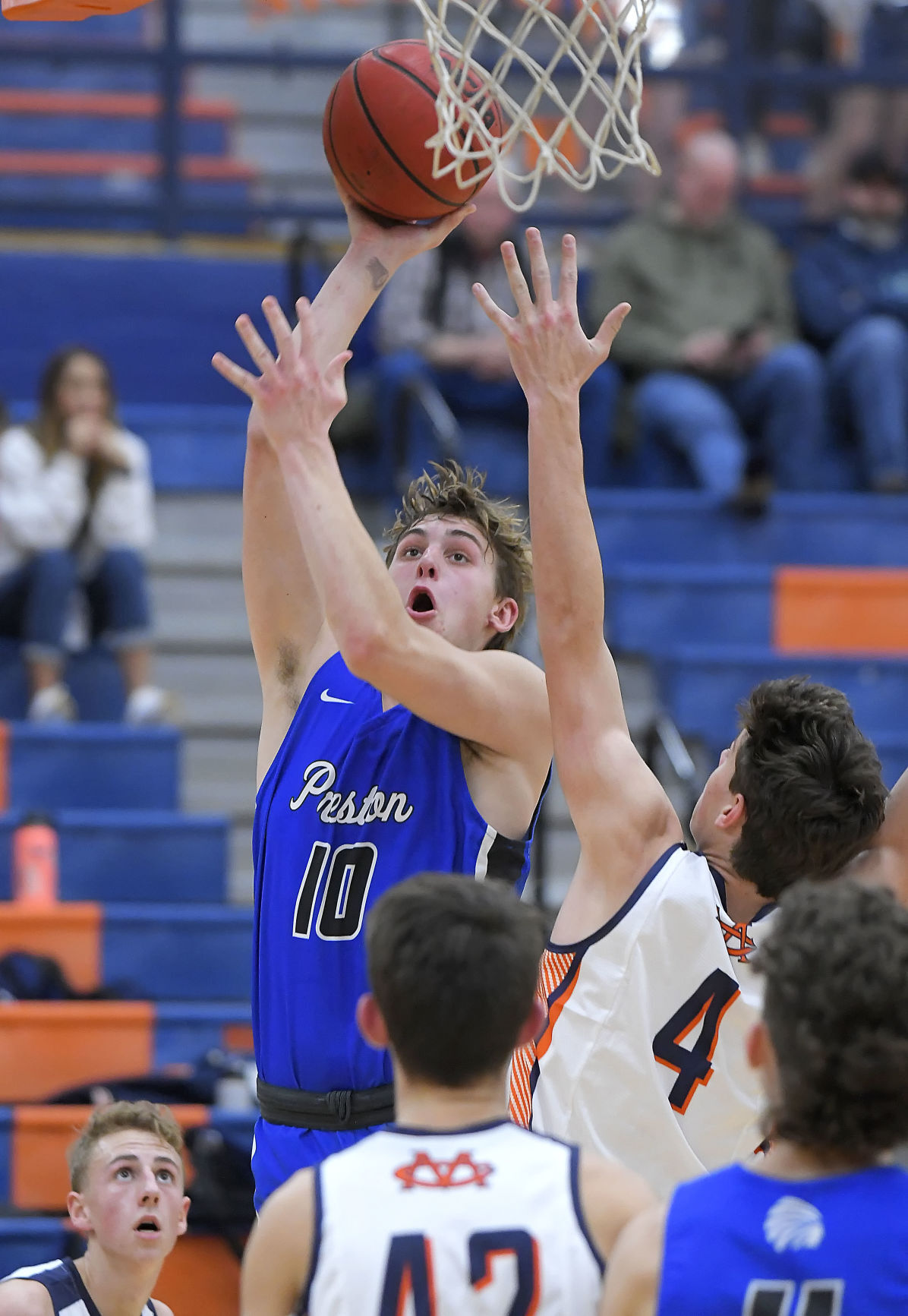 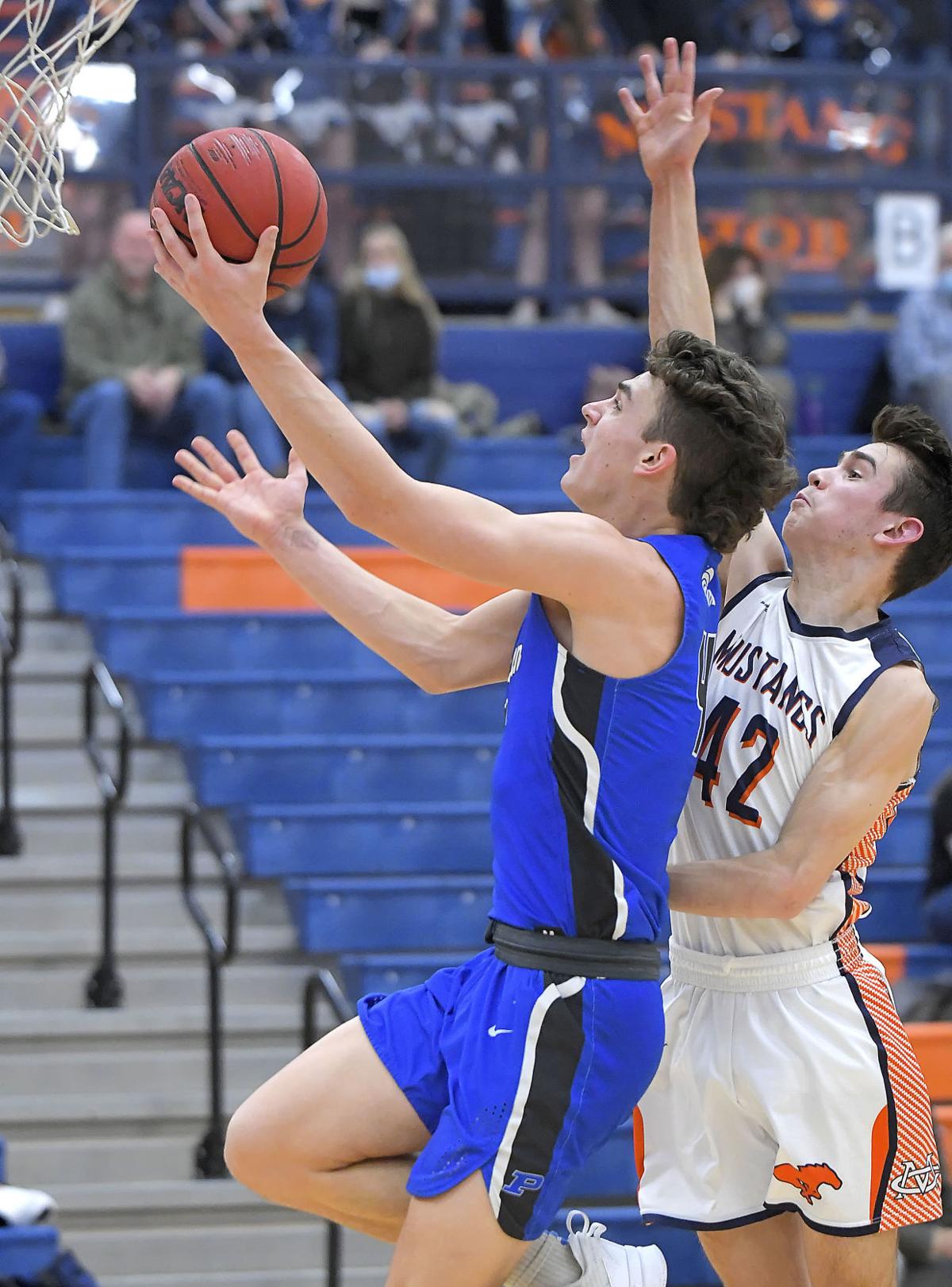 HYRUM — With a much-anticipated Wednesday night showdown against Hillcrest looming, there’s no question Preston’s boys basketball team wanted to build a big lead Tuesday against Mountain Crest and rest its starters in the fourth quarter.

Mission accomplished for the Indians, who jumped out to an 18-4 lead in the first quarter and coasted to a 63-42 victory over the Mustangs on Tuesday night at the ICON Activity Complex. In the process, Preston (9-3) swept the season series with Mountain Crest (2-7).

“We want to be fresh,” Preston head coach Tyler Jones said. “We have that big game tomorrow, so it was good to see some of the younger guys come in and contribute and get some varsity experience.”

It was another balanced offensive effort for Preston, which had eight players score five or more points. The Indians found their groove from the perimeter in the first half as they knocked down five 3-pointers, plus they generated several easy buckets in transition. Preston then proceeded to gash Mountain Crest at times in the paint in the second half.

“We’re really tough when we’re hitting threes,” Preston senior forward Braden Hess said. “Treyger (Shumway) knocked down some, Gabe (Hammons) did as well and a couple of others did, and it’s good because then it opens up more opportunities for the bigs. And then when we do well, it opens more opportunities up for (our shooters), so it’s a continuous cycle that we just need to keep going.”

Shumway buried back-to-back treys at the beginning of the second quarter for Preston, which outscored Mountain Crest every quarter and increased its winning streak to four. The visitors led by at least 13 points the rest of the way as the Mustangs were never able to dig their way out of their early hole.

“They’re a good team,” MC head coach Kevin Andersen said of Preston. “That’s twice we’ve played now and you have to execute against a team like that. In that first quarter ... we just missed a lot of buckets. We missed a lot of layups, we had some open looks and we couldn’t get one to drop right there, and that really hurt us because early on they weren’t scoring that much either. And so if we could have make some shots, it would have been a different game maybe.”

The one Mustang who was able to get going from beyond the arc was freshman Joseph Hunsaker, who finished with all five of his team’s 3-balls. Hunsaker, who scored a game-high 15 points, also made a couple of nice defensive plays.

“Joseph, he’s playing well right now,” Andersen said. “I like his confidence out there and he’s doing some good things for us.”

Hess paced Preston with 13 points, followed by Brecker Knapp and Gabe Hammons with nine apiece and Cole Harris with eight. Hess, Hammons, Harris and Rhett Larson were all able to showcase some effective post moves in the second half for Preston, which led by as many as 27 points in the fourth quarter.

“Any time we thought we had a size advantage with somebody, we tried to get them on the block and get them the ball down low to score,” Jones said.

Preston, which got eight rebounds each from Harris and Hess, was able to empty its bench for the majority of the fourth quarter and several of its reserves made a nice impact. Larson, Shumway and freshman Druw Jones each netted six points off the bench.

And now Preston will be pretty well rested for Wednesday’s showdown against Hillcrest (8-3), which is ranked third in the most recent Idaho 4A Coaches Poll. Preston is ranked fourth.

“A good team win and we just want to keep building momentum,” Jones said. “We’ve at Hillcrest tomorrow and then (next) Tuesday we start district play at Pocatello, so we want to keep that momentum going.”

In addition to Hunsaker, the Mustangs received a solid performance from Preston Wiberg, who scored 10 of his 12 points after halftime.

The Sky View boys traveled to Pocatello, Idaho, and left with a nice 71-61 victory over a good Century team. Meanwhile, the Preston girls lost a 52-51 heartbreaker in overtime to Century at home. Preston is ranked first in 4A, while Century currently holds down the No. 5 spot.

It was a very consistent offensive performance for the Bobcats, who finished with between 16-20 points in every quarter. The biggest difference was the second quarter, where Sky View (7-3) outscored Century (8-3) 16-7.

Isaac Larsen and Jackson Schumann tallied 14 points apiece for the Bobcats, who got 12 points from Evan Hall and 11 from Taydem Neal. Six different Bobcats teamed up to drain 10 3-pointers.

It came down to the wire between Preston and Century in a showdown of legitimate state title contenders. The Indians (13-5, 1-1) outscored the Diamondbacks (11-5, 2-0) 12-7 in the fourth quarter to force overtime, but the visitors were able to regroup and pull out a big win.

Hailey Meek finished with 15 points, six boards and five steals for Preston, which got 10 points and 10 boards from Kylie Larsen and nine points, five assists and four steals from Riley Ward.