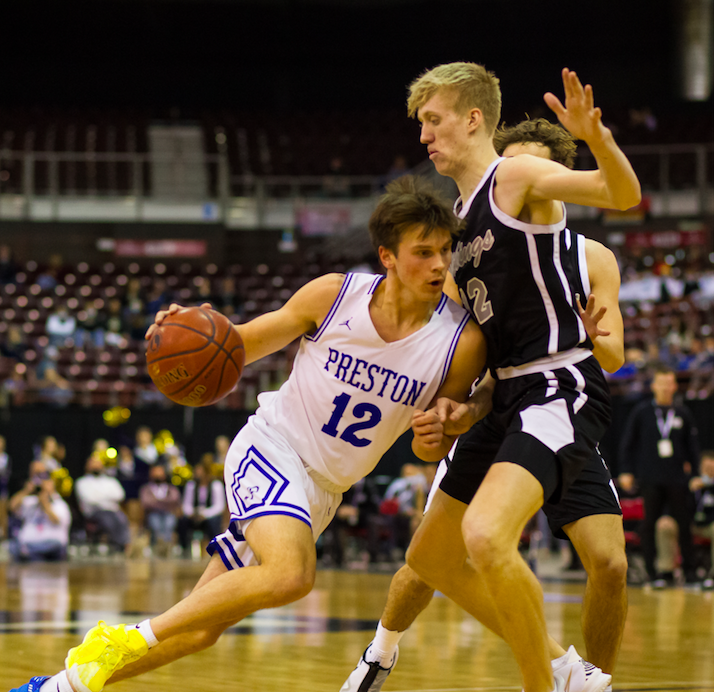 Preston senior guard Gabe Hammons dribbles into a Middleton defender during the Indians’ 47-45 loss in Saturday’s 4A state title game. 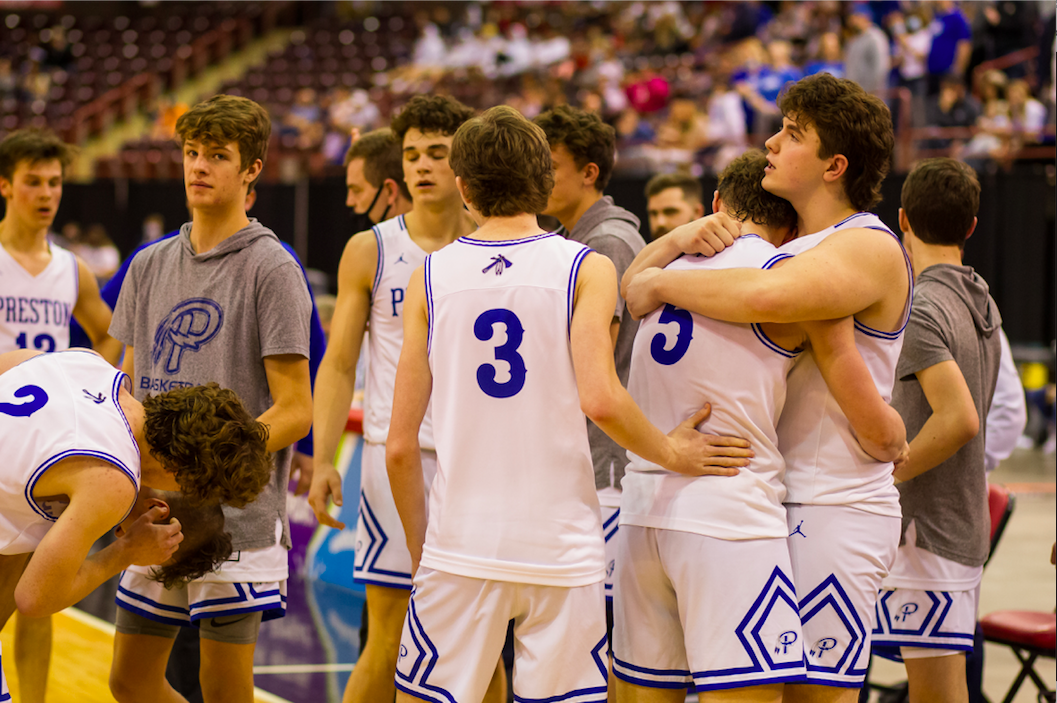 The Preston boys basketball team consoles each other after the Indians' 47-45 loss to Middleton in the 4A State Championship Game on Saturday.

Preston senior guard Gabe Hammons dribbles into a Middleton defender during the Indians’ 47-45 loss in Saturday’s 4A state title game.

The Preston boys basketball team consoles each other after the Indians' 47-45 loss to Middleton in the 4A State Championship Game on Saturday.

NAMPA — Preston’s dynasty didn’t die until it was absolutely mathematically impossible, the Indians still fighting until their head was completely cut off.

Druw Jones’ running 3-pointer with time running out cut top-ranked Middleton’s lead to 47-45 in the 4A state championship game at the Ford Idaho Center on Saturday.

If there had been a few more ticks left on the clock, if the refs had called a foul as Jones went up, giving Preston a chance at a miraculous tip-in to tie, perhaps the story would have different.

If, if, if — and given the way the Indians (19-8) had battled in the game, and the season, up until that point, if any of those scenarios had happened, it would have been folly to count them out.

But none of them did, and as soon as Jones’ 3-pointer ripped through the net, the red light on the backboard flashed, the buzzer sounded, and it was Middleton’s players sprinting away to celebrate their state title, the school’s first in boys basketball since 1965.

“It’s tough,” Preston coach Tyler Jones said. “I thought our kids battled. (Middleton), they’re a really good team. They’re a talented team, and our kids fought and fought. We left it all on the court. ... There’s a lot of teams that would give anything to be in this spot, to be in this atmosphere, to be in this arena on Saturday night on the first weekend in March. We got to do that.”

For Preston, it was only the second time in the past six years that the Indians have been on the other end of that picture after making the state title game for the last six years and winning four of those games.

Very few people would have counted on Preston making it back to that stage this year, unless their reasoning was, “Well, it’s Preston, of course they’ll make the state title game.”

And as it turned out, that logic would have been spot-on, even in a year when the Indians lost four starters and seven rotation players from 2020’s state-title team.

With Cole Harris as the only returning starter, the Indians had two separate three-game losing streaks in the regular season. With Saturday’s loss, they equaled the number of losses (eight) as their last four seasons combined. They barely made it through one of the toughest districts in the state, outdueling Pocatello and Century to claim 4A District 5’s only bid to the state tournament.

And they hadn’t made it look easy at state, beating Twin Falls by four points in the first round and Bishop Kelly by two points on a last-second Braden Hess layup in the semifinals.

None of Preston’s four title runs in the last five years have been easy, years where they’ve been the presumptive favorite and coasted to the championship. Even by those standards, though, the Indians were walking a tightrope this year — and looking at Preston and Middleton (23-4) warming up Saturday, it probably seemed like the Indians had run out of line.

The Vikings, ranked first in the final regular season 4A media and coaches polls, had star post Tyler Medaris, listed at 6-foot-7, and two other players listed at 6-6 or taller; Hess, Preston’s tallest player, was announced at 6-4, which is probably a bit generous.

But first impressions can be misleading, and after the warmups and introductions, the anthem and the ceremony, the two teams produced a classic if sloppy title game, the atmosphere and stakes of the moment racheting up the intensity on the court.

Despite being undersized, a scrappy Preston squad still managed to outrebound Middleton 30-29, including an 11-6 edge on the offensive glass.

Preston, doubling Medaris every chance it got and flying out on Middleton’s shooters, led 17-15 after the first quarter and 23-20 at halftime. After focusing back inside, Middleton turned things around in the third quarter.

After shooting 2 of 13 from behind the arc in the first half, the Vikings made their only 3-point attempt after the break.

“That Medaris, he’s a stud, and they have a lot of length,” Tyler Jones said. “We tried to double him when we could, tried to front him in the post. They have some shooters, they have size, they’re a complete team. I thought our kids really battled defensively and that kept us in it.”

Middleton led 35-34 going to the fourth quarter and 43-36 when Medaris swatted Treyger Shumway’s layup attempt out of bounds with just over a minute left. Additionally, after making all seven of its free throws in the opening half, Preston went 9 of 18 from the charity stripe after the break and missed six freebies in the fourth quarter — two of which were front ends of one-and-ones.

Middleton struggled to put the Indians away at the free-throw line — the Vikings missed four freebies in the final quarter, including two front ends — and, when Gabe Hammons made three free throws after being fouled on a 3-pointer, Preston was back to one possession at 45-42 with just over 10 seconds to play.

The Vikings, who won 15 of their final 16 games this season, then broke Preston’s desperate press for a layup, rendering Jones’ buzzer-beater — a heroic, myth-making shot in slightly different circumstances — irrelevant.

“I’m proud of them,” said Tyler Jones, who team sparkled defensively during the tournament as Preston only allowed 43, 36 and 47 points in its three games. “This was a whole new group, and to see them progress throughout the season, to come here and battle — each game was a grind — to be here in the championship and to fight was great. ... They have nothing to hang their head about.”

It was a loss, sure. But facing all they faced this year, it’s hard to argue that 2021 was anything other than another brick in the wall, another line in the book that writes the Indians as one of the finest basketball dynasties Idaho has ever seen.

“That’s the best program in the state,” Middleton coach Andy Harrington said in his postgame speech, going beyond the simple respect that winning coaches usually offer up to their vanquished opponents. “Tyler Jones, that’s the best coach in the state. Preston is the pinnacle.”

With three crucial seniors and top scorers leaving — Hammons, Hess and Harris, who led the Indians with 13, nine and seven points, respectively, on Saturday, maybe the Indians will finally fall off next year.

On the other hand, maybe not.

Remember Druw Jones, who hit the final buzzer-beater, the Indians’ final flailing against the presumed end of their dynasty?

“It’ll be a new group again next year,” said Tyler Jones, whose team only committed four turnovers Saturday. “But that’s the great thing is, each year the younger kids come and get to see this and be a part of it, and that gives them the goal, they want to make it back here.”