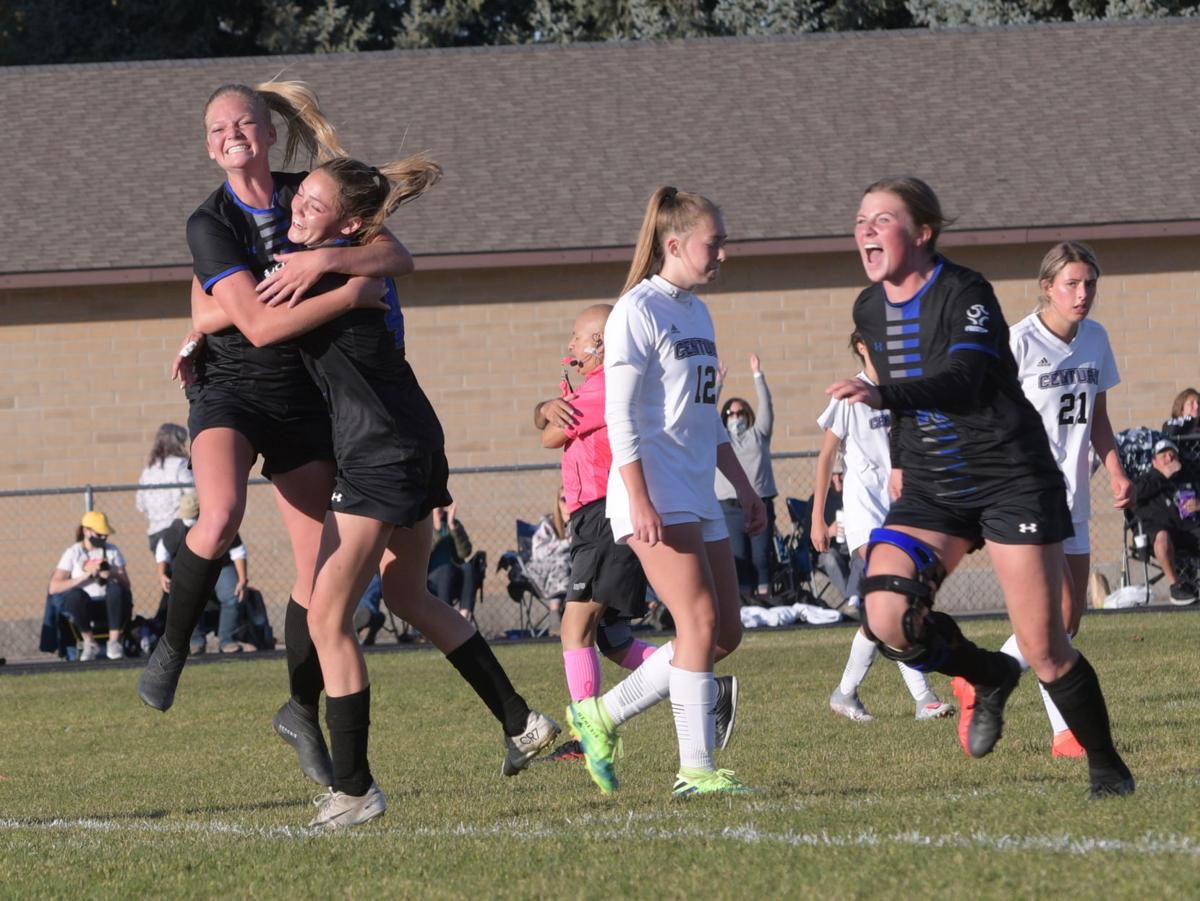 Preston’s Sydney Kelly, far left, hugs teammate Taya Nielson, while Abigail Lyon sprints over to join the celebration after the Indians beat Century in the championship match of the district tournament on Oct. 15. 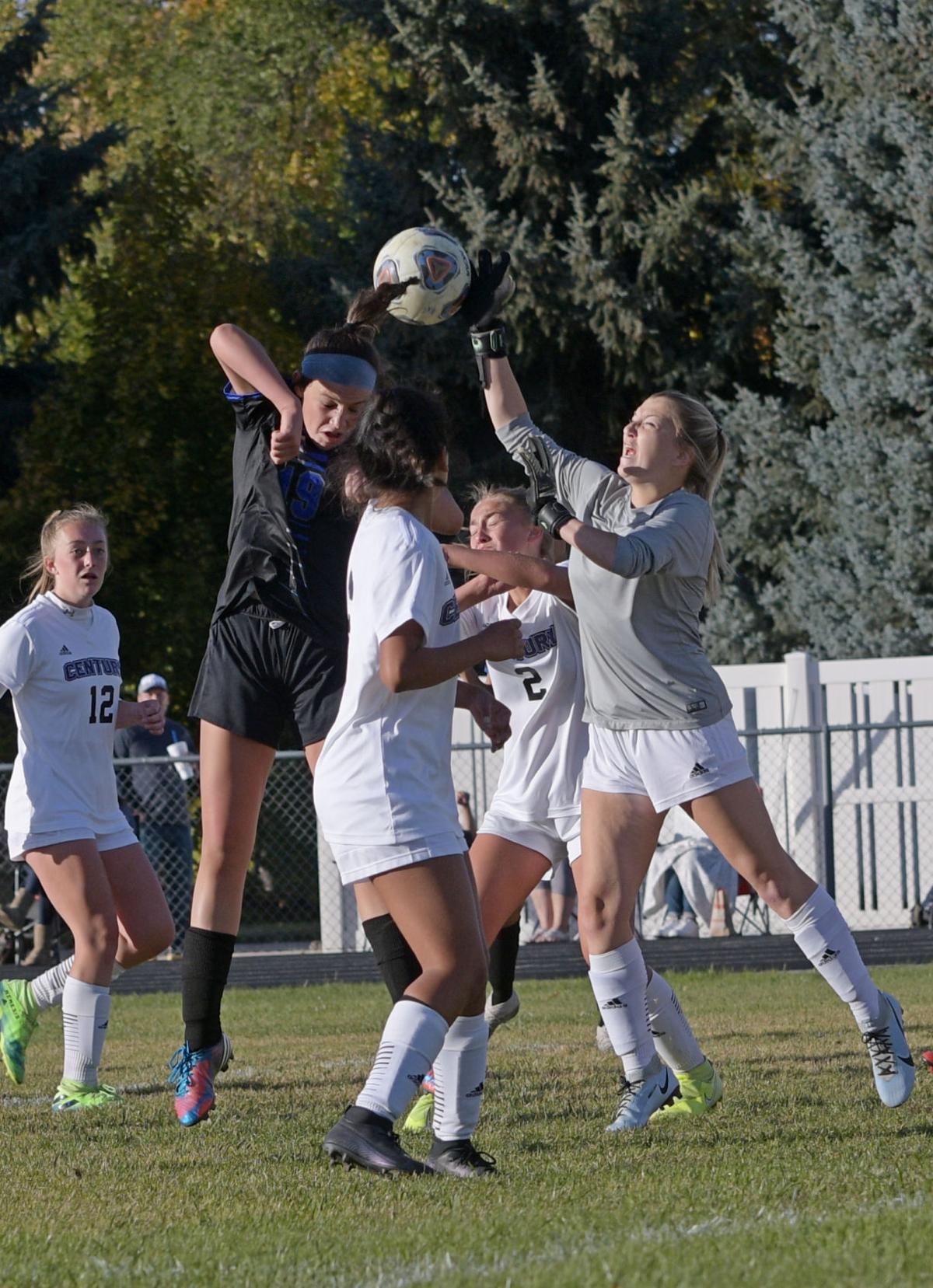 Preston’s Ella Jeppsen goes up for a 50-50 ball with the Century goalkeeper during the championship match of the district tournament on Thursday.

Preston’s Sydney Kelly, far left, hugs teammate Taya Nielson, while Abigail Lyon sprints over to join the celebration after the Indians beat Century in the championship match of the district tournament on Oct. 15.

Preston’s Ella Jeppsen goes up for a 50-50 ball with the Century goalkeeper during the championship match of the district tournament on Thursday.

PRESTON — The likelihood of a trip to the 4A State Championships was looking very promising for the Preston girls soccer team a year ago, but star midfielder Addison Moser blew out her knee late in the season and the Indians ended up losing to Middleton in a state play-in match.

There was no heartbreak for the Indians in 2020, though.

Freshman Ella Jeppsen volleyed in a Abigail Lyon corner kick in the 66th minute and Preston shined defensively the entire 80 minutes en route to a 1-0 victory over Century in the championship game of the 4A Fifth District Tournament on Thursday afternoon.

Preston (10-6) will take a four-match winning streak into next week’s state tournament. This is the first time in the last 18 years the Indians have won a district tourney title match on their home field — girls or boys.

“These girls, especially these seniors, but the whole team, they made a goal after that happened last year that we were going to get back here,” longtime Preston head coach Brandon Lyon said. “And this group of girls, we’ve never pushed a group harder through the offseason, through the summer and into the season. But this group of girls, they dedicated everything to make this happen. They’ve worked as hard as any group we’ve ever had in the summer, in the weight room, on the field, just everything, and to see this happen for them, I couldn’t be more proud of what they’ve put in. They deserve this.”

In the process, top-seeded Preston improved to 5-1-0 against district opponents this season. However, this is the first time the Indians shut out either Century or Pocatello in ’20.

“(It’s) kind of the best feeling in the world,” PHS senior goalkeeper Sydnee Marlow said. “I think that no other moment could describe how hard that we’ve worked all summer and all season, and we’ve kind of struggled throughout the season to work as a team, to defend and (attack) as a team, and I think today we really showed our skill as a team.”

Indeed, Preston played well for large chunks of the game and looked especially sharp in the early going. Case in point: The Indians outshot the third-seeded Diamondbacks 11-1 in the opening half and had a handful of dangerous scoring opportunities.

Ashley Lowe-Anderson barely missed wide left on a pair of crisp shots in the early going, and Moser stabbed at a ball and redirected it into the side netting.

Preston’s best chance to dent the scoreboard in the first half came on a nice strike from distance by Aspen Jensen — who sparkled from her central midfield spot — that the Century keeper had to deftly tip over the crossbar.

And while the Indians didn’t find the back of the net in the first 40 minutes, they certainly set the tone.

“That’s exactly what we’ve been building toward is to be able to control a game like that,” coach Lyon said. “We’ve got the talent to do it, it was just a matter of working through some kinks through the season, some little things, tactical things, technical things, and that was awesome to see. We didn’t get a goal, but we felt so good, the girls felt so good at halftime.”

To their credit, the D-backs played much better in the attack after halftime, but it was another strong performance by Preston’s back three of Taya Nielson, Kylie Larsen and Mickayla Robertson. Marlow also did an exceptional job in goal for the Indians, who earned their sixth clean sheet of the season.

Preston had to deal with some nervy moments during the final 12 minutes of the second half. Century took a pair of free kicks from just outside the 18-yard box and whipped in a few inviting corner kicks. Marlow made an outstanding save on one of the free kicks and used her athleticism to punch a couple of corners out of danger.

“What Syd and what our whole team did there defensively, they deserve to show everybody that that’s what they’re capable of,” coach Lyon said. “I mean, Syd, you couldn’t ask more of a goalkeeper then what she did. ... That command in the box, her directing traffic, her making sure the marks were taken care of, her making a couple of great punches to clear the ball, that’s what she’s capable of. And the back line, once again, you can’t say enough for the way they limited Century’s chances.”

The hosts nearly slammed the door shut during the final few minutes as Larsen drilled a long free kick off the top of the crossbar. Larsen is one of eight Preston seniors who will be able to cap off their prep careers at the state tournament.

“It’s kind of surreal because it was hard last year not being able to play, but I think this was the year for our team and we pulled it off, so it feels awesome,” said Moser, who has scored 19 goals this season. “I’m so excited for state.”

Preston will square off against the runner-up from the Fourth District in the opening round of the eight-team 4A state tournament next Thursday at 1 p.m. at Hillcrest High School.