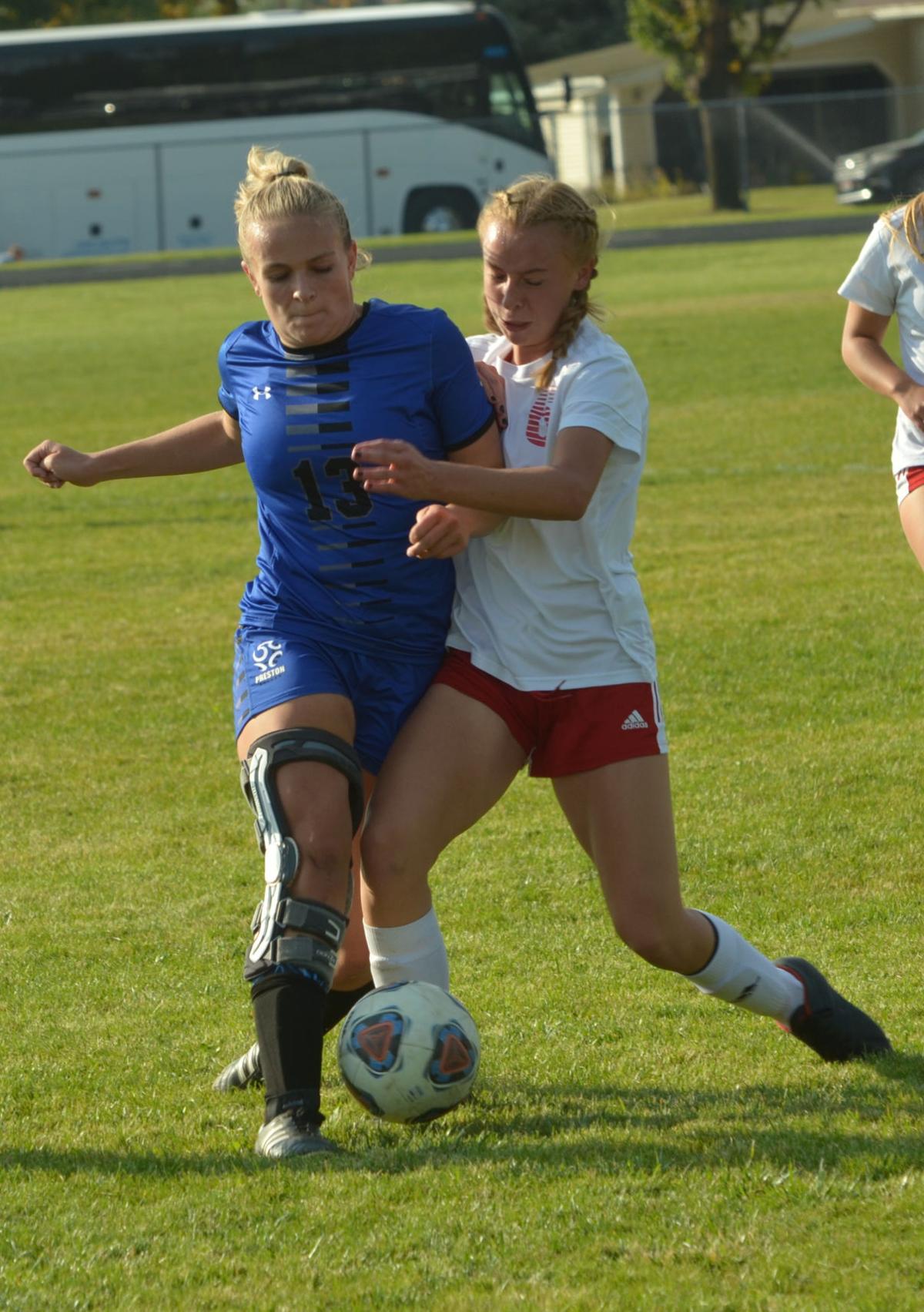 Preston’s Addison Moser, left, battles a Pocatello player for possession of the ball during a district tournament match Thursday in Preston. 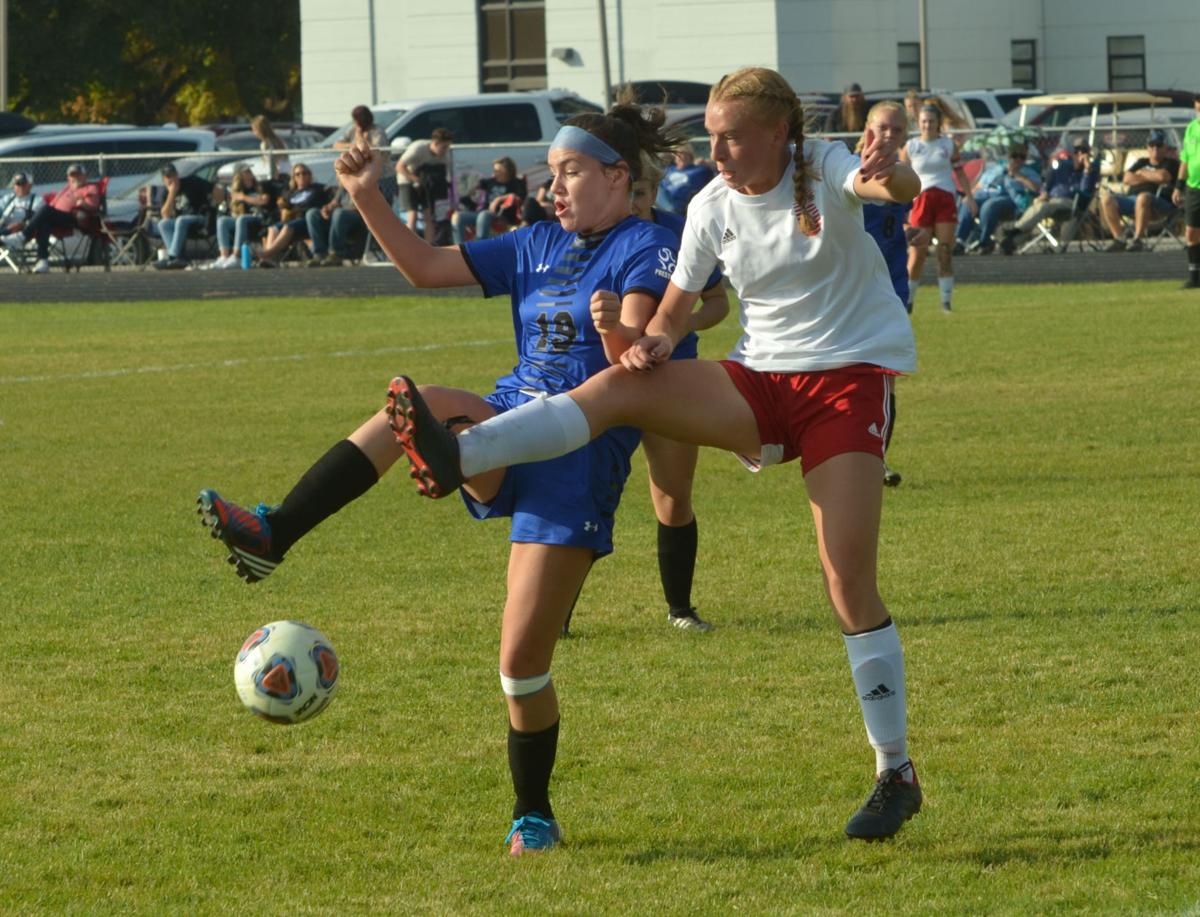 Preston's Ella Jeppsen left, battles a Pocatello player for possession of the ball during a district tournament match last Thursday in Preston. Jeppsen scored the game-winning goal in the tourney championship game.

Preston’s Addison Moser, left, battles a Pocatello player for possession of the ball during a district tournament match Thursday in Preston.

Preston's Ella Jeppsen left, battles a Pocatello player for possession of the ball during a district tournament match last Thursday in Preston. Jeppsen scored the game-winning goal in the tourney championship game.

PRESTON — They’ve taken their lumps at times this season, but there’s no question the Indians are peaking at the right time.

Top-seeded Preston scored three times in an eight-minute stretch of the first half en route to a 5-2 victory over second-seeded Pocatello in a 4A Fifth District girls soccer tournament match on Thursday. Each team prevailed by one goal at home during the regular season, but the Franklin County Indians made sure it wouldn’t be a nailbiter this time around as they stormed out to a 5-0 lead.

In the process, Preston extended its winning streak to three and netted at least three goals for the third straight match.

“That’s what we’ve been waiting for,” Preston head coach Brandon Lyon said. “It’s what we’ve just been building toward and, you know, we’ve had a hard time scoring goals throughout the course of the year. It’s really been up and down, but we’ve told the girls there’s going to be a breakthrough, that breakthrough is coming. We’re too talented for it to not come ... but the girls have been working so hard.”

As well as Preston (9-6-0) played, it was Pocatello (7-7-2) that got of to a strong solid as the visitors earned a pair of corner kicks and sent in a few dangerous balls in the early going. However, Preston was able to quickly turn the tide and put relentless pressure on Poky for the lion’s share of the final 30 minutes of the opening half.

The hosts found the back of the net three times during that timespan. The floodgates opened when Aspen Jensen chested in a Abigail Lyon corner kick in the 21st minute. It was Lyon’s fourth corner of the half and she adeptly whipped all of them right into the heart of the 6-yard box.

The hosts struck again three minutes later when Addison Moser buried a penalty kick after getting taken down from behind in the box. Preston’s lead ballooned to 3-0 with 11 minutes remaining in the half courtesy of a 35-yard free kick by standout center back Kylie Larsen.

Preston outshot Pocatello 10-1 during the final 30 minutes of the half.

Preston terminated any chance of a Pocatello comeback early in the second half. Freshman Ella Jeppsen sent in a lovely cross that Andie Bell finished from point blank range in the 45th minute. Bell, an all-state cross country runner, completely dominated the match from her outside midfielder position for large chunks of play Thursday.

“What she can bring on the outside, I don’t know if we’ve had a player that can do that, attack like that, but at the same time be able to defend like that,” coach Lyon said. “And the crazy thing is she’s battling a quad injury. She’s only been playing about every other game, so conditioning wise she’s not what normal Andie is.”

Abigail Lyon gave Preston a 5-0 advantage 10 minutes later on a beautiful 30-yard kick free that tucked just under the crossbar. All five of Preston’s goals were scored by different players, which is noteworthy when you consider Moser is the team’s leading goal scorer by 16.

“Just for us to work as a team together and just finally come together, and for it to click like that just feels awesome,” said Jensen, who shined in her central midfield role. “We buried them.”

Pocatello defender Kjerstin Bunderson showcased her skill by burying two 40-plus-yard free kicks during the final 10 minutes of the match. Nevertheless, it was an outstanding defensive performance by Preston’s back three of Larsen, Taya Nielson and Mickayla Robertson, who held Poky to zero shots on goal during the run of play in the game.

“Big, big props to them,” said coach Lyon, whose side is one victory away from securing its spot in the 4A State Championships.

Poky and Century will square off next Tuesday for the right to play Preston on the road two days later.

It was a heartbreaker for Preston, which rallied from a one-goal deficit despite playing a man down, but lost to top-seeded Century 2-1 on a golden goal six minutes into overtime.

The Diamondbacks (10-1-2) scored midway through the first half and appeared to be in control when Preston midfielder Ty Miller was issued a red card in the second half after fouling a Century forward as the last defender. However, Kadin Reese volleyed in a Brian Bustos corner kick in the 72nd minute to equalize for the Indians (8-6-2).

“We played a man down the majority of the second half and played great,” PHS head coach Kira Matthews said. “The whole game was back and forth. Both sides had good opportunities and chances, but when Ty went out the boys knew they had to rally together if they were to stay in the game, and they did. We dictated the tone of the game after that and really built up our confidence, knowing that it we can outplay them with 10, we can really outplay them with 11.”

Preston will host Poky in an elimination match next Tuesday at 4 p.m.

They both face a little bit of an uphill battle, but Green Canyon and Ridgeline are in the mix for the 4A state title. Regions 9 and 11 dominated on Day 1 of the 4A Championships, which were contested Friday at Liberty Park in Salt Lake City.

Defending champion Desert Hills advanced all five of its positions to Saturday’s semifinal round and has earned a maximum 10 points on the first day of the tourney. Fellow Region 9 program Crimson Cliffs only lost one match and is in second place with nine points — one more than Region 11 titleist Green Canyon. Ridgeline is currently fourth with seven points.

Meanwhile, Mountain Crest is tied with Ogden for fifth place with four points, while Logan and Bear River are part of four-way tie for seventh with three points.

The Wolves and Riverhawks advanced three of their positions to the semifinals. Green Canyon will be represented in the round of four by third singles player Ava Checketts and both doubles teams, Olivia Phillips/Alice Wilkinson (No. 1) and Maren McKenna/Kate Anderson (No. 2). Likewise, third singles player Myriam Anderson prevailed in both of her matches for the Riverhawks, as did the doubles tandems of Emma Hansen/Ellie Carlston (No. 1) and Lauren Ellis/Kaitlyn Horsburgh (No. 2).

McKenna and Anderson will square off against Logan’s Staeli Ellis and Norah Perry for the right to qualify for the championship round at second doubles. Erika Olsen, Bear River’s top singles player, also went 2-0 on Day 1 of the tournament.

Mountain Crest’s first doubles duo of Kate Hardy and Brook Clark lost in three sets in the quarterfinals, as did Bear River’s top doubles squad of Shannon and Carisa Epling.