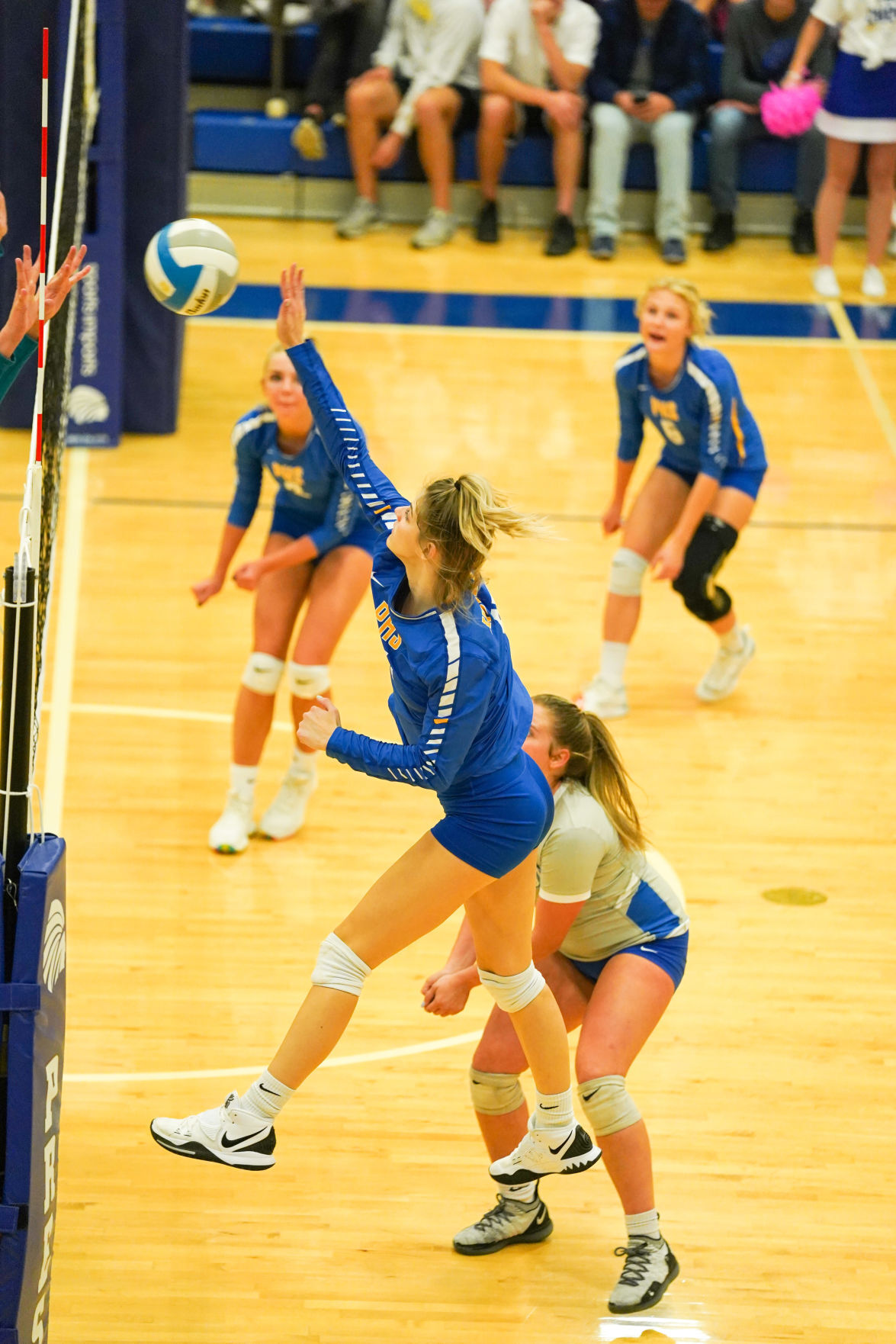 Preston middle blocker Hailey Winward attacks the ball in a district match against Century on Thursday night in Preston. 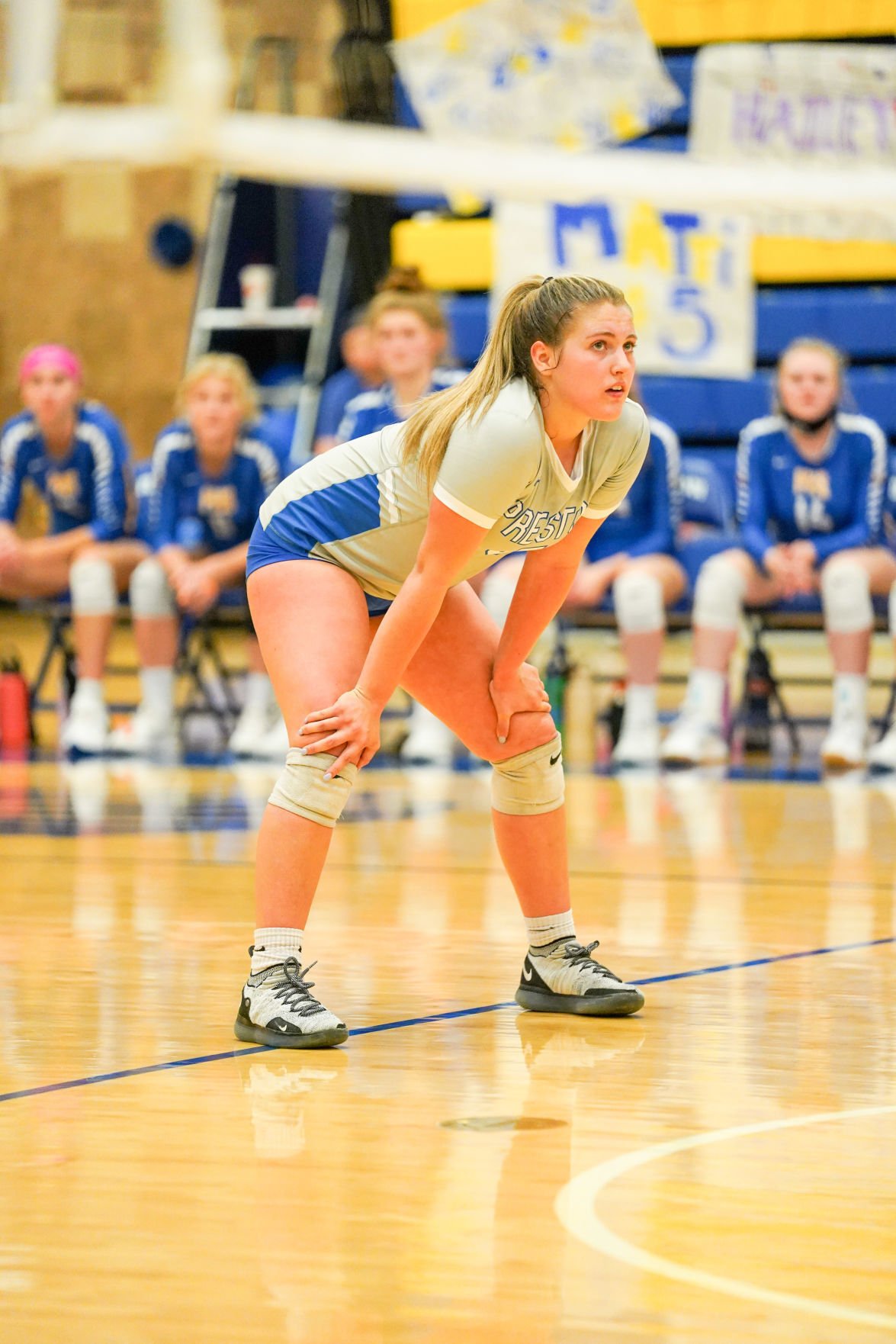 Preston libero Matti Whitehead was one of five seniors who were honored prior to Preston's home match against Century on Thursday. Whitehead finished with a team-high 14 digs.

Preston middle blocker Hailey Winward attacks the ball in a district match against Century on Thursday night in Preston.

Preston libero Matti Whitehead was one of five seniors who were honored prior to Preston's home match against Century on Thursday. Whitehead finished with a team-high 14 digs.

PRESTON — Regardless of what happened on Senior Night, Preston’s volleyball team was going to be the No. 1 seed for the upcoming 4A Fifth District Tournament.

Nevertheless, the Indians were motivated to leave no doubt they were the best team in the district during the regular season.

It showed as Preston never trailed the entire evening en route to an impressive sweep of Century (25-9, 25-14, 25-16) on Thursday. It was the second time in seven days the Indians dispatched of the Diamondbacks in straight sets.

“I would say it was probably one of our top (performances),” Preston head coach Karaska Haskell said. “I think we’re just finally back in a rhythm of having everyone at pretty full force, and so I think that attributes to it a lot.”

Indeed, Preston (4-0 in district) has dealt with some injuries throughout the season, but those players are back and making a difference. One Preston athlete who has returned to the lineup with a vengeance is libero Matti Whitehead, and the senior was digging balls all over the court Thursday.

Whitehead, who has been recovering from a right ankle injury, finished with a team-best 14 digs, including a spectacular diving punch with her left hand in the third set. Preston ended up winning that point, and Whitehead’s court coverage and passing was spot-on throughout the match.

“Not only is she excellent on the court, but she brings so much with her leadership and just her (communication),” Haskell said of having Whitehead back. “She reads (opposing players) so well and the girls really need her on the court as a leader and as a player, and so it’s nice to have her back and leading our team.”

Preston set the tone from the get-go when setter Hannah Stephenson received a perfect pass and delivered a quick set to middle blocker Hailey Winward, who put it down with authority for the first point of the match. The Indians then proceeded to jump out to a 4-1 lead in the opening set.

Century got as close as 7-4 in the first set before Preston’s Adree Selley served 12 straight points and helped give the hosts a commanding 19-4 advantage. Selley didn’t have any aces during that stretch, but the D-backs struggled to pass her serves directly to their setter.

“Oh my gosh, it got us so excited, and Adree’s so good at serving,” Stephenson said. “We’re so happy that she’s able to push through everything because it’s hard to serve that many in a row, but she got us going, she kept up the momentum, and it was big.”

Preston scored 13 points off Century errors in the first set, while and hosts only gave up four points courtesy of miscues. Khloe Hobson had five kills and a block for the Indians in the set.

The hosts scored the first four points of the second set and led by at least three points the rest of the way. Preston also went on runs of 5-0 and 4-0 to terminate any chance of a Century comeback.

Preston jumped out to a 5-0 lead in the third set, although Century bounced back with spurts of 5-1 and 4-0 to pull even at 11-11. However, Preston scored the next two points off Century errors and eventually pulled away behind the strong serving of Stephenson. The senior setter helped the Indians string together seven points in a row and take a commanding 22-14 advantage.

“It was huge for us and the girls will say, ‘that’s why we serve so much in practice’ because we really have been focusing on it, because we know the importance of getting a team out of system,” Haskell said.

It was a stellar all-around effort from Stephenson, who dished out 25 assists, chipped in with three block assists, dug six balls and did a great job of distributing the ball to all of her hitters. The 6-foot-0 senior also threw in a couple of well-disguised dumps to keep Century off-balance.

Hobson attacked the ball with confidence and precision throughout the evening as she racked up 14 kills. Even when the sophomore outside hitter received a less-than-ideal set — which was rare — she found a way to avoid the antennas and put the ball away.

Akazia Knapp chipped in with seven kills for Preston, which got a team-best four block assists from Selyce Burnett.

Prior to the match, the Indians honored their five seniors in Whitehead, Stephenson, Burnett, Winward and Emily Longhurst. Longhurst slammed the door shut with a kill on match point.

Stephenson and Whitehead raved about how close knit this senior class and team in general is.

“It’s just a team atmosphere, really,” Whitehead said. “We’re just like a family, so when we play together, it just means so much to us.”

Preston will host the winner of Century/Pocatello next Tuesday night at 7 o’clock in the district tournament. Preston beat second-seeded Pocatello in four sets both times during the regular season.