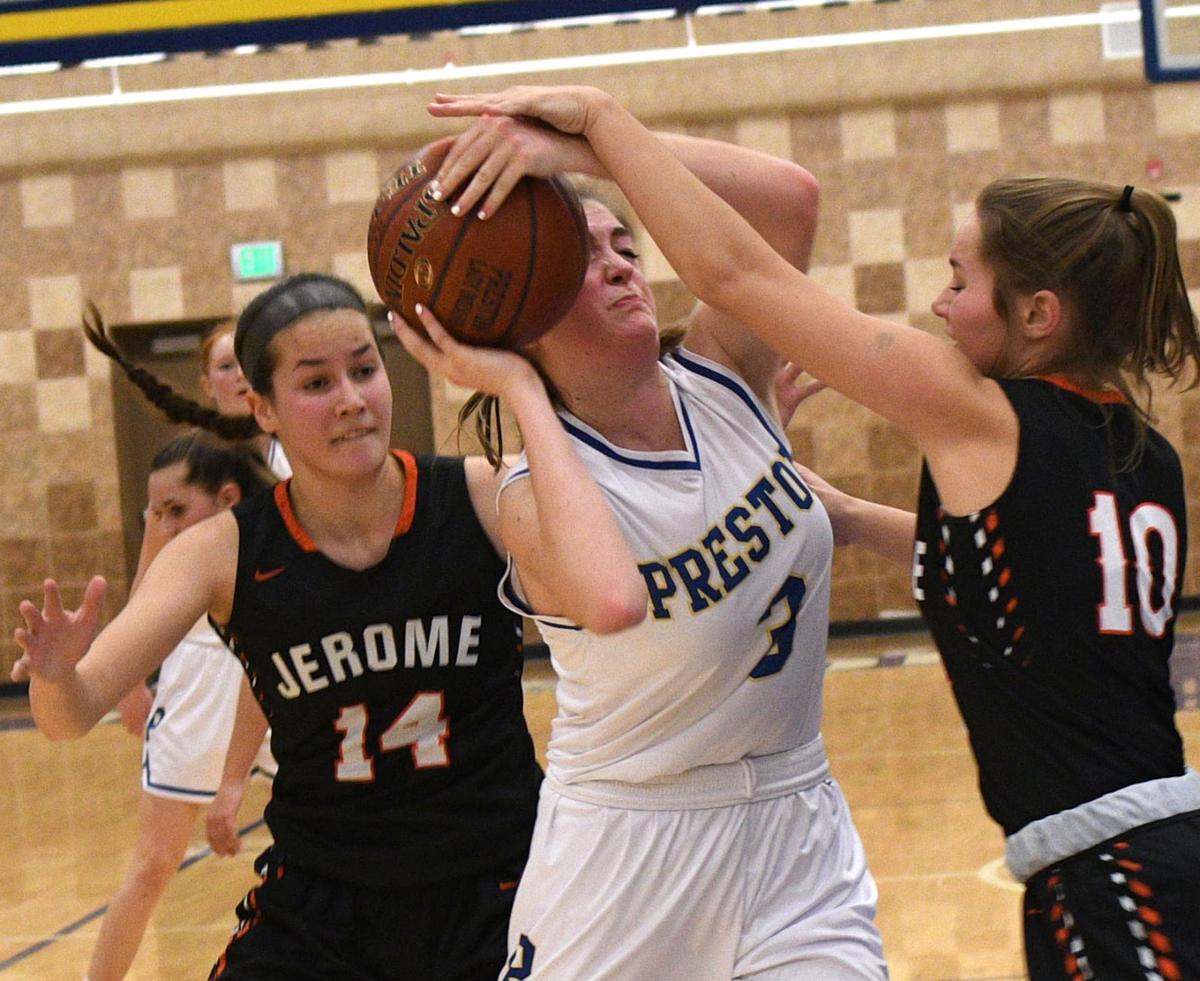 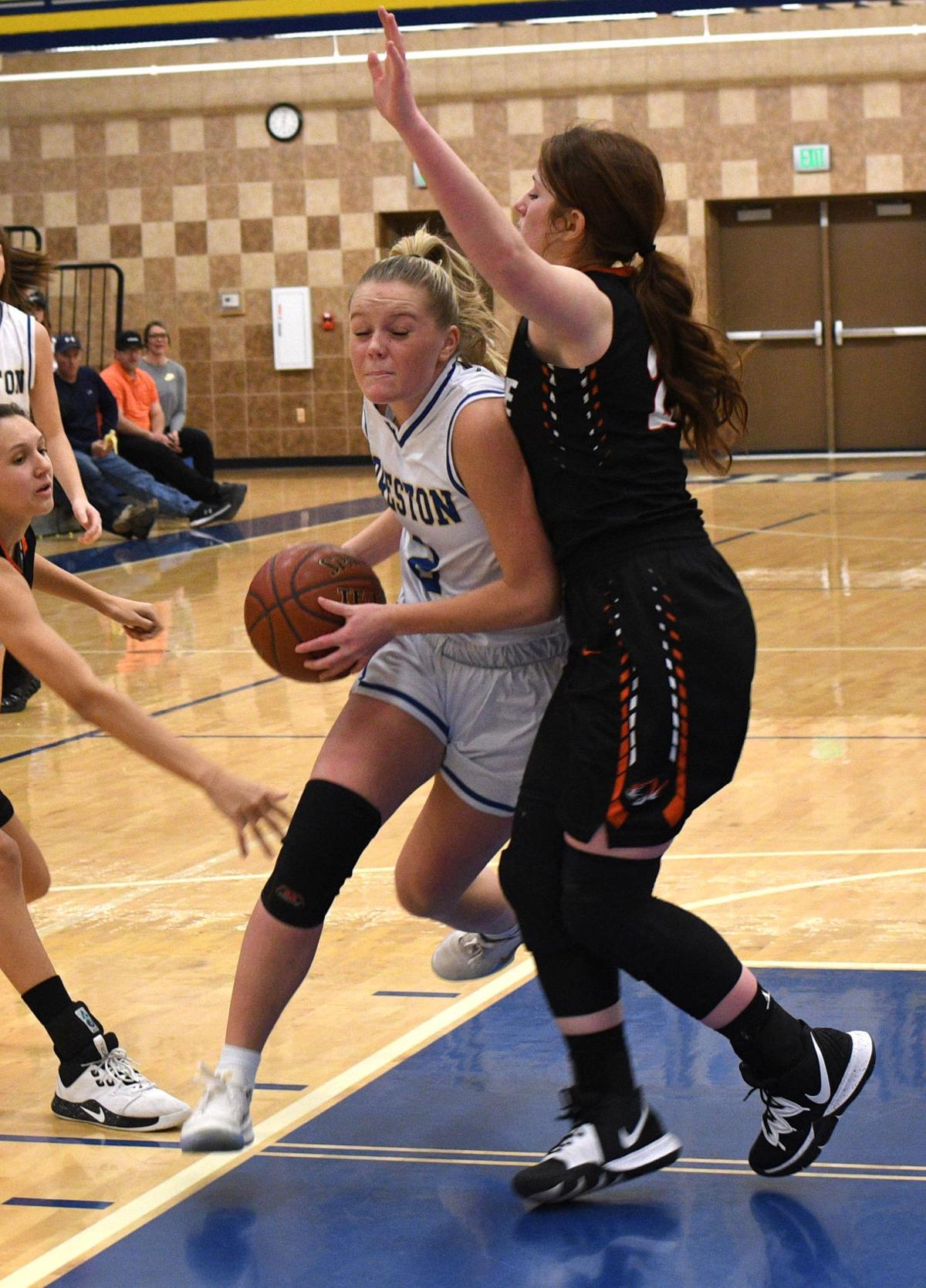 PRESTON — Things were looking pretty bleak for the Indians midway through the second quarter as they trailed by 11 points and couldn’t seem to corral a defensive rebound in a must-win game.

To the delight of Preston head coach Ryan Harris, his team made some adjustments, battled back and found a way to prevail — much like it has several times during the 2019-20 campaign.

A 15-4 run spanning the third and fourth quarters helped propel second-seeded Preston to a hard-fought 66-60 victory over fourth-seeded Jerome in an elimination game in the 4A District 4-5 Girls Basketball Tournament on Thursday night. It was the second time in three days the Indians won to extend their season.

“These girls have hearts just bouncing out of their chests,” Harris said. “... To bounce back for two games now (is outstanding). I mean, man, your backs’ are against the wall these past two games. You lose and your season’s over. As we were walking through the line and shaking hands with those Jerome girls, there were a couple girls crying, and I’m just like, ‘man, I feel bad for them, but I’m just glad that’s not my girls.’”

Preston (18-7) is now one win away from advancing to the 4A State Tournament for the third time in the last four seasons. The Indians must dispatch of Kuna (17-7) in a state play-in game Saturday at 4 p.m. at Jerome High School.

Preston only led one time in the first half — 9-7 midway through the first quarter on a Mickayla Robertson 3-pointer — and played from behind until reserve forward Sydnee Marlow scored five quick points at the beginning of the fourth quarter. Marlow’s nice drive to the basket less than 30 seconds into the quarter gave the Indians an advantage they wouldn’t relinquish.

“Syd’s been a great boost for us this whole district tournament and, I mean, all year Syd’s given us great minutes,” Harris said.

Every time the Tigers (16-9) threatened to regain the momentum down the stretch, the Indians had an answer, and typically in the form of athletic forward Kylie Larsen. Larsen scored on four straight Preston possessions in the fourth quarter en route to a game-high 19 points. The junior also pulled down a team-high eight rebounds.

“I think it was definitely key because she was feeling it tonight and playing well, and toward the end (Hannah) Schvaneveldt, the girl that was guarding her, was in foul trouble,” Harris said. “And so we just told Kylie, ‘Kylie, if she wants to stay in the game she can’t guard you, so she’s just going to be straight up, so turn and go out her.’ And Kylie did a great job of doing that.”

In addition to finding Larsen in the paint, the Indians did a good job of hitting their free throws with the game in the balance. Preston went 14 of 22 from the charity stripe in the second half and made 9 of its first 12 freebies of the fourth quarter to keep the visitors at bay.

Preston, which trailed by as many as nine points in the third quarter, also did a much better job of dealing with Jerome’s press as the game progressed. Sophomore guard Riley Ward came off the bench in the final quarter to help give the hosts a timely boost in the ball handling department.

“We came together and found the easy passes, and you can’t do that without your teammates,” said Preston senior guard Alexis Harris, who made some clutch passes for easy buckets and finished with six points, five assists and two steals. “We played well as a team.”

The Indians also didn’t allow standout Jerome guard Mercedes Call to go off from 3-point range, which is a big reason why they avenged a regular season loss to the Tigers. Call buried a pair of treys pretty early in the first quarter, but only netted five points the rest of the way.

“She’s a very talented player and coming in we knew that,” Harris said. “You know, we gave her a couple early (baskets), but then at halftime we were told, ‘If you want it, you’ve got to close them down.’ We knew who to (focus on) and we got them.”

Regardless of what happens Saturday, it’s been a very successful season for Preston, which faced some signification question marks when first-team all-state post player Bethany Dow graduated and starting guard Addison Moser blew out her knee during the soccer season.

West Side came storming back from a six-point halftime deficit to beat Malad, 57-46, on the road. In the process, the Pirates (18-3, 8-0 district) swept the season series with the Dragons (13-7, 5-3), went undefeated during district play and have won 18 of their last 19 games.

Bryler Shurtliff poured in 20 points for West Side, which outscored Malad 39-22 in the second half. Ryan Beckstead and Connor Nielsen chipped in with eight points apiece for the Pirates, who got seven points from both Blaze Brown and Adam Headworth — all in the fourth quarter.

The Pirates were able to pull away from the Dragons by going 17 of 22 from the free throw line.

“We came out and had a real good second half,” said WS head coach Tyler Brown, whose team will host the winner of Soda Springs-Aberdeen in the district tournament. “Proud of them for finishing strong. Malad is a real good team.”