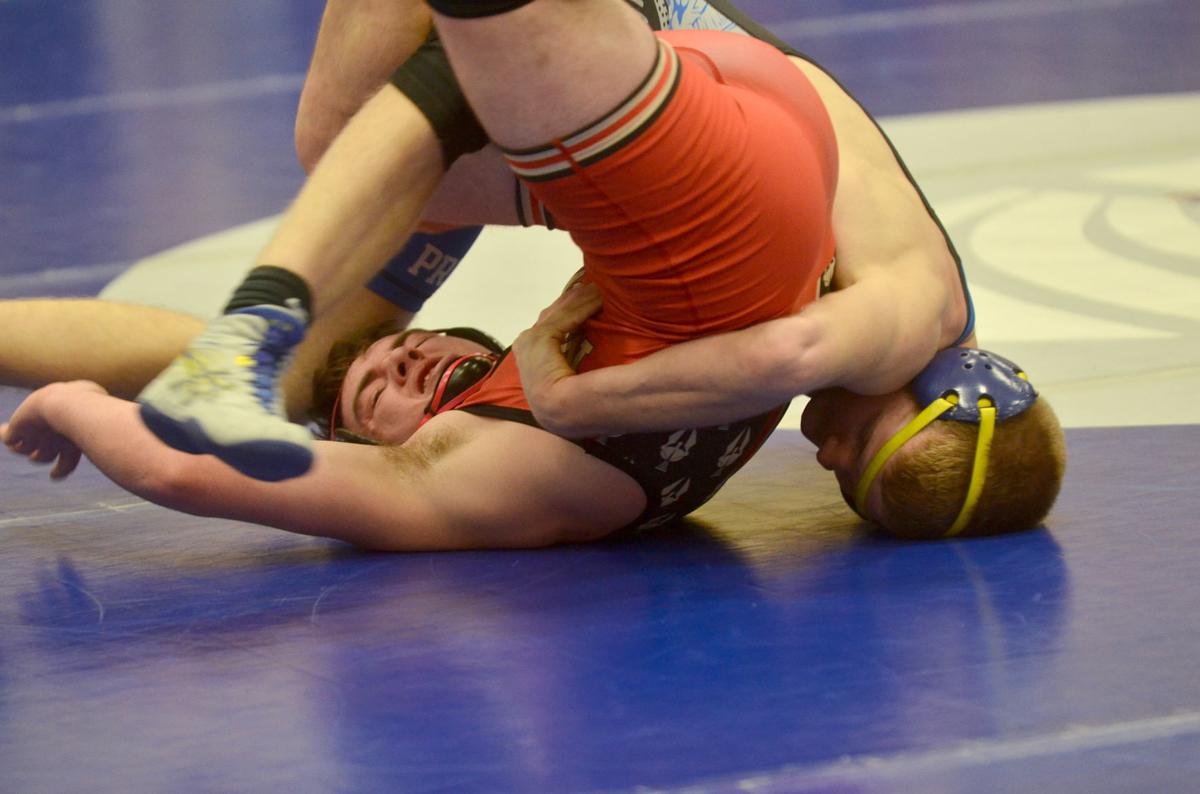 RIGHT: Preston’s Lincoln Bradford, left, positions himself for a half nelson against Minico’s Kelt Studer during a district wrestling dual on Tuesday night in Preston. 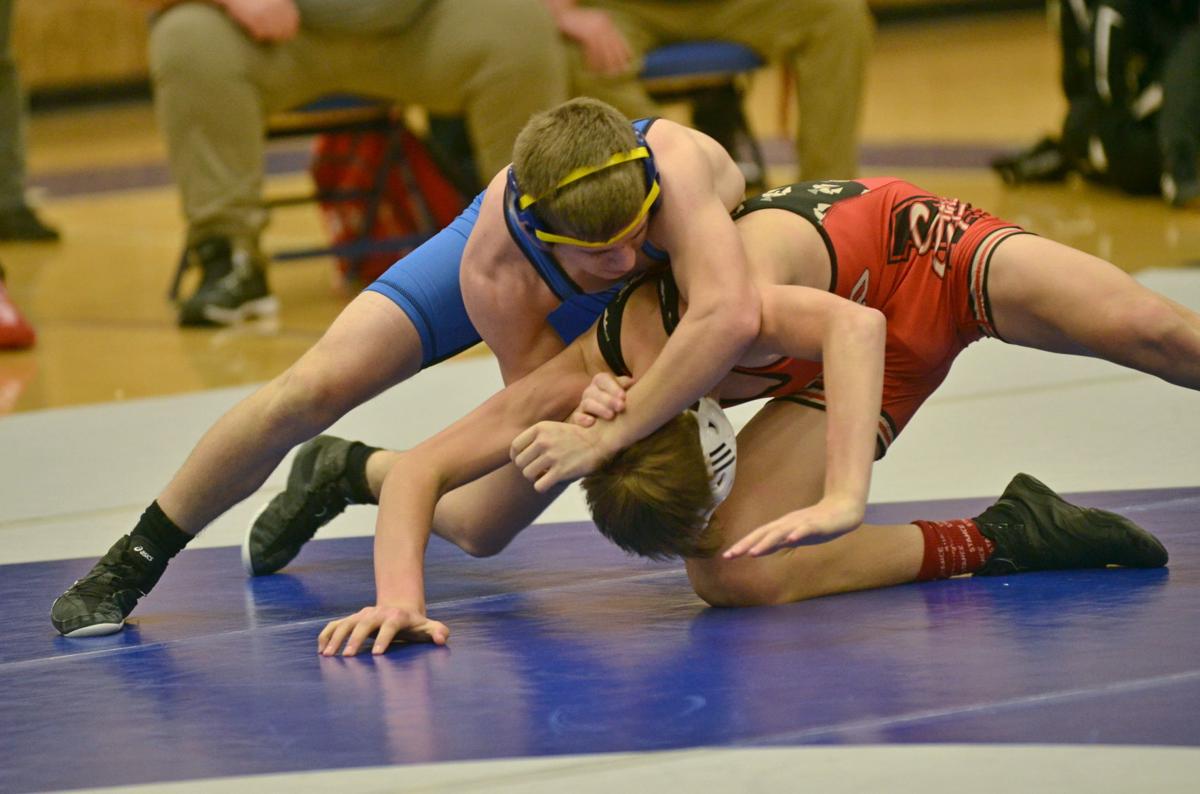 Preston’s Lincoln Bradford, left, positions himself for a half nelson against Minico’s Kelt Studer during a district wrestling dual on Tuesday night in Preston.

RIGHT: Preston’s Lincoln Bradford, left, positions himself for a half nelson against Minico’s Kelt Studer during a district wrestling dual on Tuesday night in Preston.

Preston’s Lincoln Bradford, left, positions himself for a half nelson against Minico’s Kelt Studer during a district wrestling dual on Tuesday night in Preston.

It was a pretty good night for a handful of Preston wrestlers against one of 4A’s better programs in Minico.

Of the seven contested matches, the Indians were triumphant in four and had an opportunity to win another. Unfortunately for Preston, it forfeited seven matches in its home finale, which allowed the Spartans to roll to a 60-18 victory in a 4A District 4-5 dual on Tuesday.

“The kids that we have are tough,” Preston head coach Jason Keller said.

Preston got second-round pins from senior David Seamons (152 pounds) and junior Brayden Weisbeck (126). Weisback’s victory came against a returning state qualifier. Seamons is a two-time state qualifier for the Indians, while Weisbeck was one victory away from advancing to the placement rounds at the 2018 4A State Championships.

In arguably the most exciting bout of the night, Preston’s Tait Rawlings (170) overcame a sizeable second-round deficit and rallied past his opponent, 13-11. Rawlings, a first-year wrestler, recorded three takedowns in the third round, including a single leg in the waning seconds to earn the win.

Keller is hopeful more football players like Rawlings will elect to wrestle in the future. The junior was buoyed on by a very supportive home crowd in his come-to-from triumph.

“I don’t think he’ll ever have that many kids, have that many fans screaming and yelling because he won on the football field,” Keller said. “I mean, that’s probably one of the experiences that he’s never going to forget in his life because it was just him out there. ... He’s going to be a good leader on the football field next year, but he’s also not going to forget that moment where it was just him (on the wrestling mat).”

Keller was only one win away from making it to the placements rounds in an always tough weight class, 138 pounds, at the state tourney as a freshman. The sophomore is currently ranked second at 145 pounds in the most recent idahosports.com 4A poll.

Seamons, who was limited by an injury as a junior, is currently 4A’s sixth-ranked grappler at 152 pounds, but has enjoyed some recent success competing at 145 pounds. The senior went 4-2 at that weight class at last weekend’s Rockwell Rumble, which is the most prestigious tournament in Utah.

Seamons has talked to coach Keller about dropping down a weight class on a permanent basis, which would set the stage for some fierce competition with Caigun Keller.

“If he drops down to 145 (for good) it’s going to be interesting ... but that’s his decision,” coach Keller said. “You know, he’s a senior and if he wants to drop down (that’s totally fine). I think, as a coach, I like that type of atmosphere in the room because those two have to be on their toes. And when you’re not having to be on your toes like that, you get complacent a little bit.”

Seamons is just one of four seniors on the team, with two of the others being fellow veterans Lincoln Bradford (132) and Drevin Rigby (160). Bradford qualified for state as a sophomore and won a match. Rigby was pinned by Minico’s Steven Crow with one second remaining in the final round in what was a close match.

Another Preston veteran is 120-pounder Paul Gregory. Like Gregory, freshman Emery Thorson (160/170) has been an impact performer for the Indians — at least when his schedule is open. Thorson is also a guard on Preston’s freshman basketball team.

The Indians started the 2019-20 campaign with 22 grapplers, but they have been hit hard by injuries and are down to 13 athletes right now. Former Logan wrestler Jaden Perkins (138) was having a solid season for Preston, but recently suffered a dislocated elbow in a dual against 4A power Jerome.

A lack of numbers have been a struggle for Preston for several years now. Part of that can be attributed to the Indians having no junior high program for a little while — it was reinstated a few years ago — coupled with the increased popularity and success of the basketball program. Preston has developed into 4A’s premier boys basketball program as the Indians have advanced to the state championship game four straight times and are in the midst of a 10-game winning streak.

“It’s a (wrestling) team that’s still learning,” coach Keller said. “We haven’t broken too many barriers yet. Tonight was fun to watch them. I’ve been trying to tell them that they’ve got to believe in themselves and their moves. For me, I just get disappointed that there could be more kids enjoying the opportunity (to wrestle). ... When other schools put their time in and then when we don’t fill our lineup when we go somewhere, it’s kind of a bummer deal.”

The encouraging thing is Preston’s junior high program is starting to improve. Nevertheless, substantial strides need to be made in order for the Indians to ultimately sustain a similar level of success they enjoyed in the early-to-mid 2000s.

“We’re getting better in the junior high (ranks),” coach Keller said. “It’s still trying to pick up. We keep trying to be there for them (and encourage them) to come in and experience the ride.”

Luke Smellie drove to the basket to pull Preston ahead with eight ticks left on the clock. The Spartans then missed a potential game-winning 3-pointer, and the Indians knocked down one of two free throws in the final second to seal the victory.

“We had to battle on the road and we found a way,” Preston head coach Tyler Jones told The Idaho State Journal. “We got a couple (defensive) stops when we had to.”

Minico outscored Preston 38-29 in the middle two quarters to take the lead, but the Indians won the fourth quarter by a 18-13 margin to prevail in a showdown of two of 4A’s top programs. Preston is tied with Middleton for the No. 1 spot in the most recent 4A coaches poll, while Minico is ranked fifth.

Ty Hyde paced Preston in points (21) and rebounds (14). It was another balanced offensive attack for the Indians, who got 14 points from Scott Dunn and Smellie, and 10 from Cole Harris.

Preston had won its previous nine games by at least 17 points.