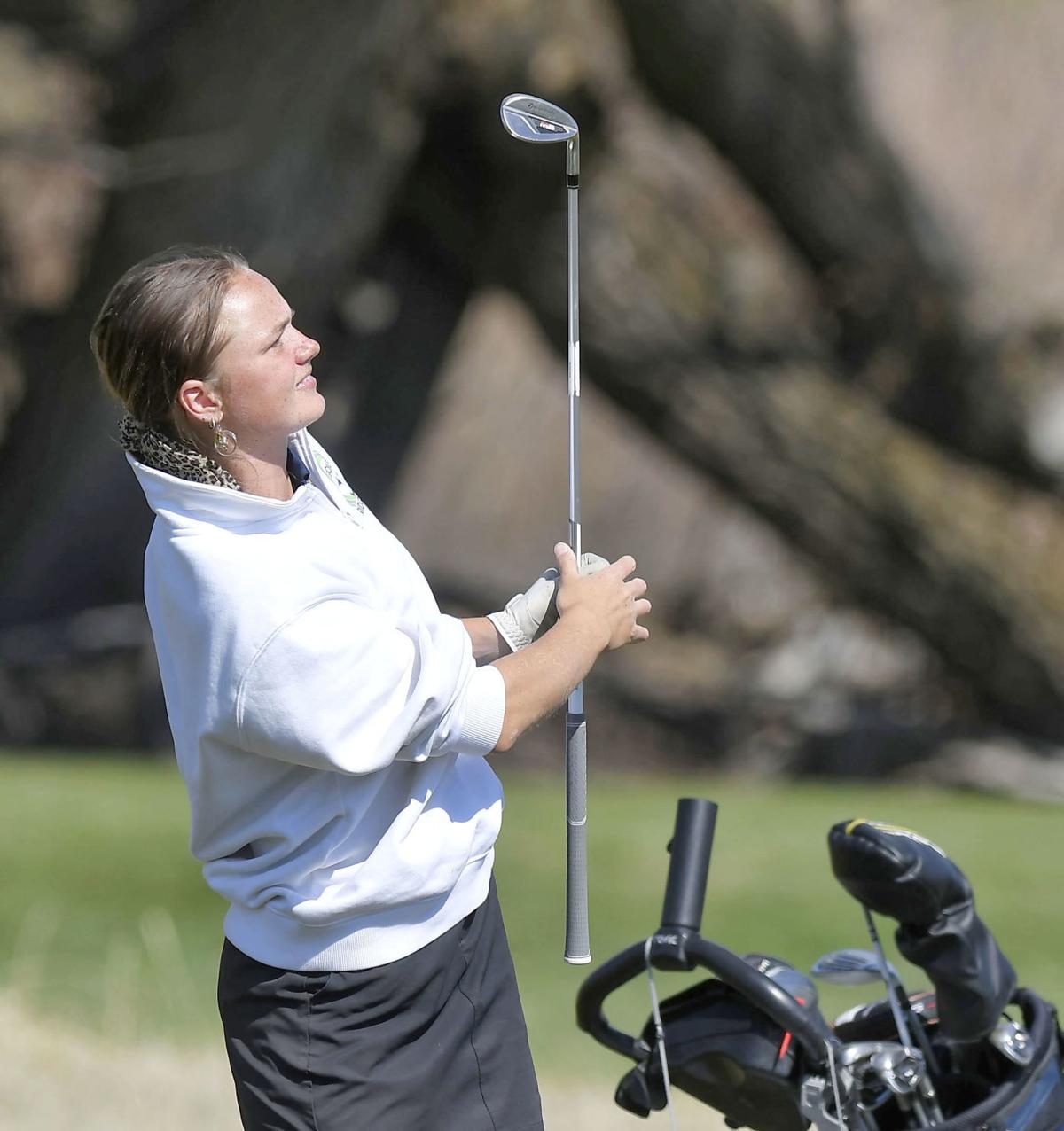 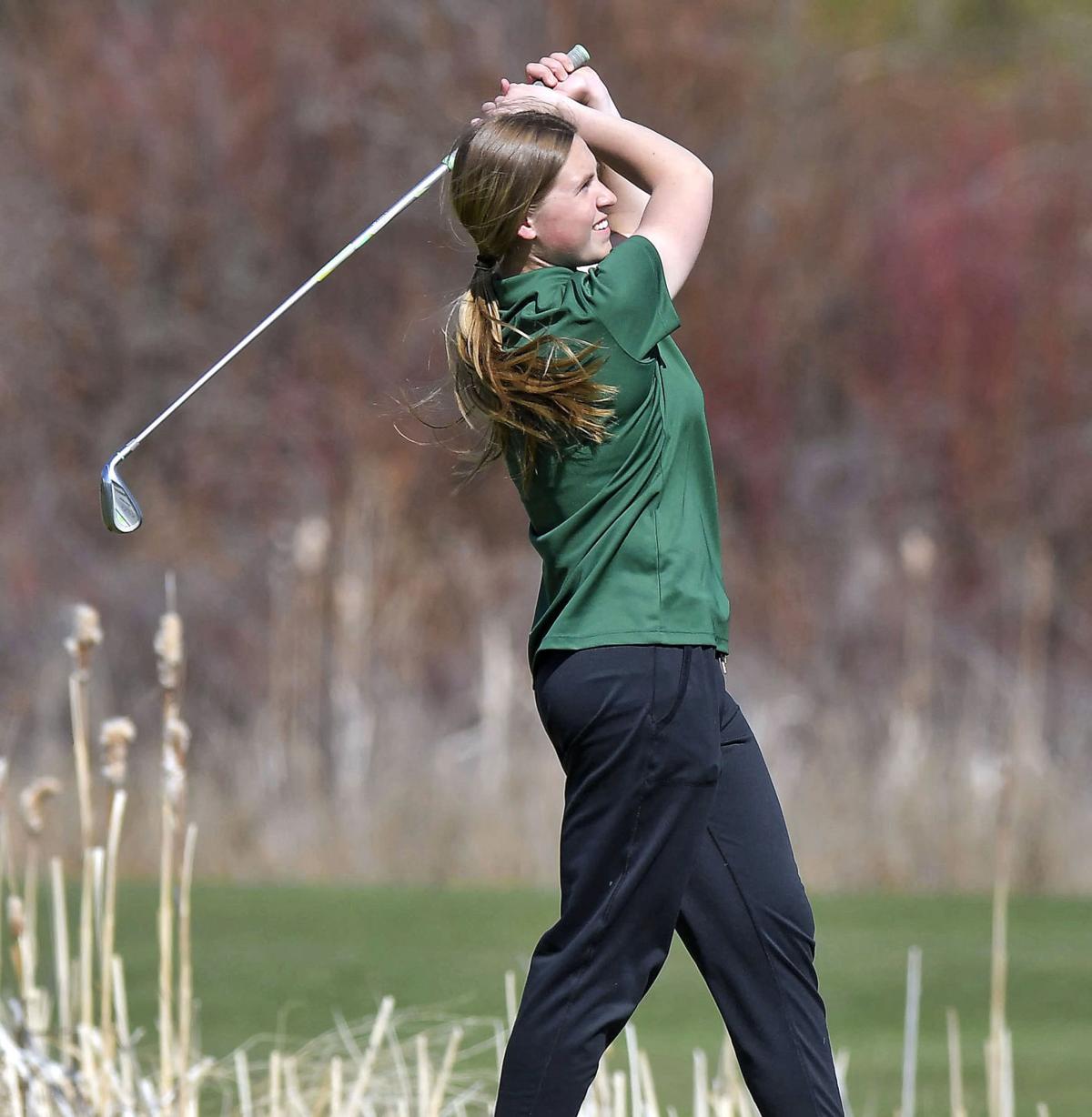 Green Canyon’s Landree Spackman hits the ball on the 16th hole at Logan River Golf Course on Thursday. She was the medalist with a round of 88.

Green Canyon’s Landree Spackman hits the ball on the 16th hole at Logan River Golf Course on Thursday. She was the medalist with a round of 88.

It came down to the fourth best individual score to decide the team outcome Thursday at Logan River Golf Course.

The Region 11 girls got together for their fourth league outing of the season. It came down to Ridgeline and Green Canyon once again. This time the Riverhawks were back on top — like they have been three times now.

Ridgeline’s Brooke Goats carded a 96, which was good enough to lift the Riverhawks over the Wolves 372 to 378. Green Canyon had won on Monday by four strokes.

“I think we are doing really good,” Ridgeline senior Eryn Hendricks said. “Monday was a wake-up call for us. We all need to work harder and focus more. We have a really solid top six. We are looking good.”

Conditions were much better Thursday than last Monday. However, only two schools had lower team scores in the second round of action of the week. The Riverhawks and Logan were the only teams to post better team scores.

“Any time we have good weather, we will take it,” Riverhawk head coach Julie Major said. “It was really nice out there today.”

Four Riverhawks finished among the top five. Hendricks was second with a round of 89, followed by Alyssa Buist (91), who tied for third, and Lily Swink and Goats with scores of 96 to tie for fifth.

“Our girls play this course, and it is like our second home,” Major said. “My girls have been practice all week and put hours in every day. I’m really proud of the hard work they put in, and they do it all season and all year.

“Eryn is so consistent and so level headed out there. She can play well under any conditions. She is playing really well and was excited to be in the 80s today.”

Hendricks and Buist have been on the Ridgeline varsity team since they were freshmen. The seniors were on the 2019 team that took state and look forward to defending that title later this spring as 2020 was postponed by the UHSAA. There was an unofficial state tournament held.

“We are the reigning state champs as no one took us down last year because we didn’t have a season,” Major said. “We will keep grinding. Our mental game, we need to take the pressure off and enjoy the game.”

Green Canyon had four girls among the top 10 scores. Landree Spackman was the medalist with a round of 88, which happens to be her best score at the River.

Spackman was joined by her cousin, Sammy Spackman, who tied for third with a 91. Alivia Longhurst was eighth with a 97, and Kenna Falslev finished 10th with a 102.

“After last time, we felt we could win,” Landree Spackman said. “We fell short today, but we are going to keep trying. Ridgeline is really good, solid, but we are right there.”

The senior had her putter working Thursday, which gave her confidence in the rest of her game.

“It felt like everything was coming together and working,” Landree Spackman said.

That was after her first hole of the day, which turned into a triple bogey.

“I did terrible on the first hole,” Landree Spackman said. “It was really bad. I hit into the weeds and trees. But I pared the last four holes on the front nine and was solid on the back. ... I knew I could make up for that start. I’ve learned to forget about the last hole.”

Birch Creek is her home course, but she also likes the River.

“If you keep it in the fairways here, it’s almost easier,” Landree Spackman said.

Like Landree Spackman, Hendricks had her best-ever round on the course. And she also had a rough start on her opening hole.

“I had some rough shots, but was able to recover from them,” Hendricks said. “... It was a good day and my previous best was a 91 or 92. I like it here (at Logan River) because personally, this is my home course. I play here the most.”

Every school had an individual garner points Thursday — the top 12 finishers get points toward earning all-region honors. Bear River’s Morgan Rose tied for fifth with a 96. Kiera Crosbie led the Mustangs with a round of 98 to place ninth. Vivian Worley tied for 10th with a 102 for Logan. Sky View’s Allie Payne finished 12th with a 103.