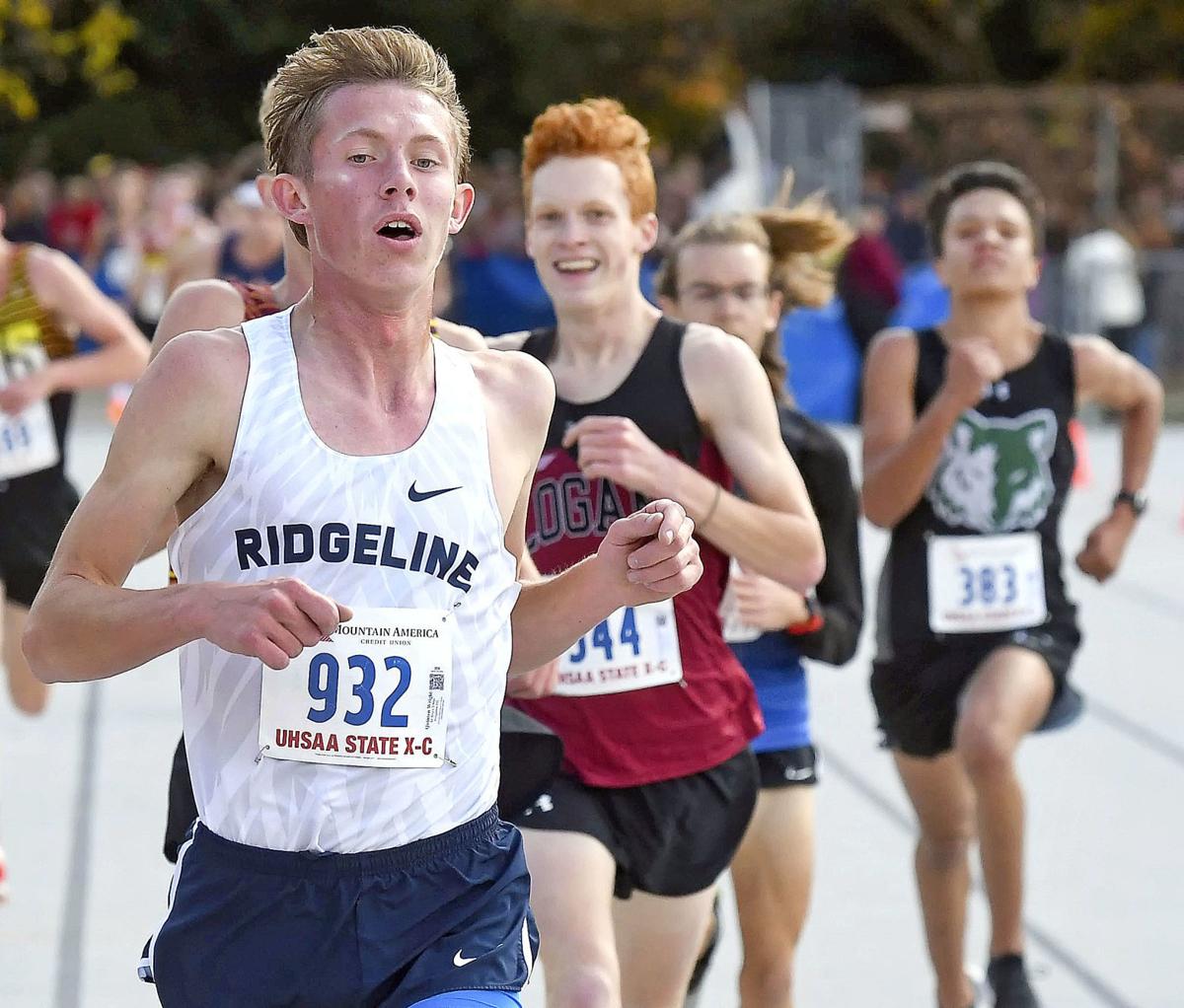 Ridgeline’s Quinten Wright (932), Logan’s Alex Rasmussen (544) and Green Canyon’s Branson Sharp compete in the 4A boys state cross country meet on Wednesday at Sugar House Park. Wright was the top local boy, finishing in 14th place with a time of 16:20.9. 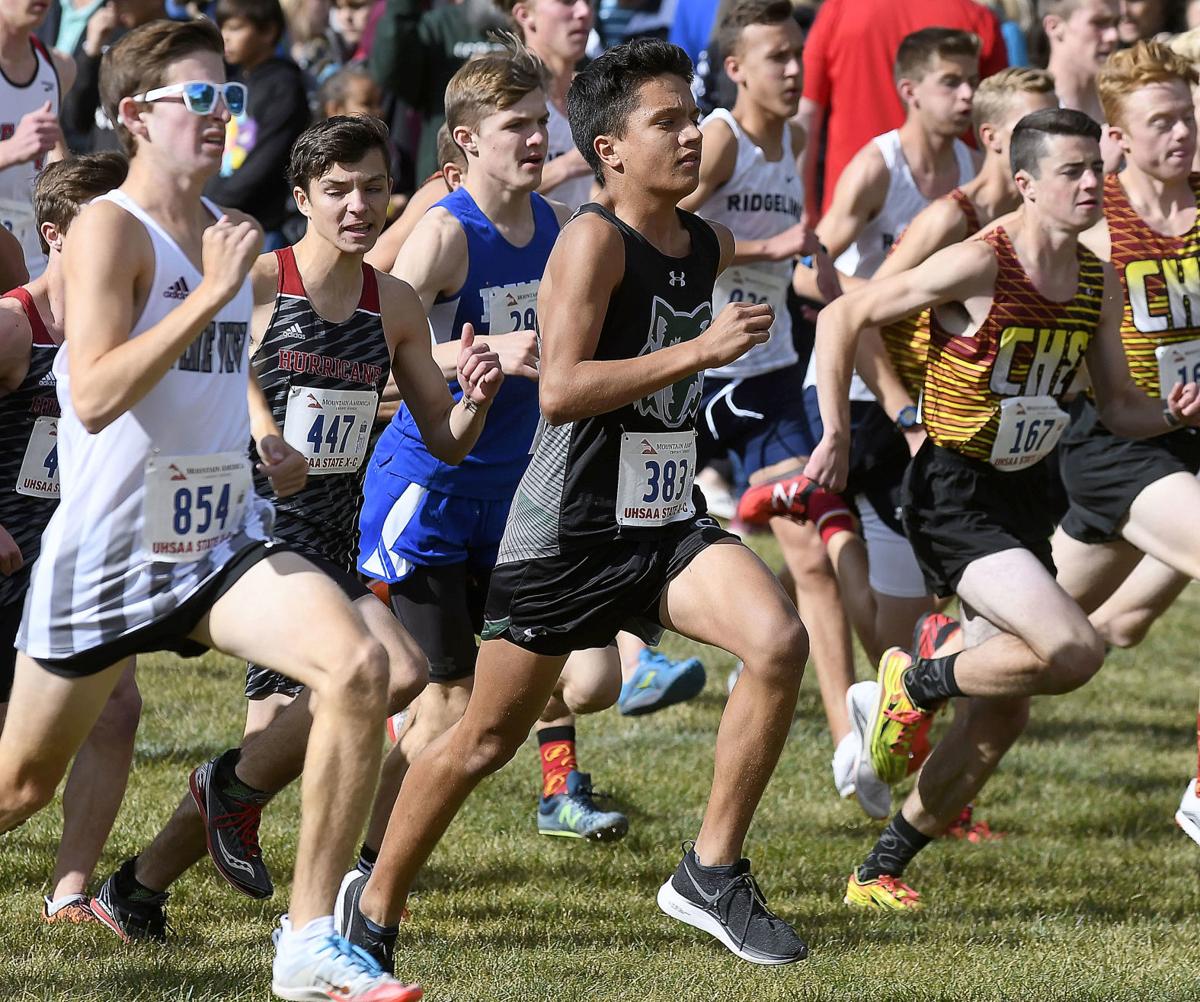 Ridgeline’s Quinten Wright (932), Logan’s Alex Rasmussen (544) and Green Canyon’s Branson Sharp compete in the 4A boys state cross country meet on Wednesday at Sugar House Park. Wright was the top local boy, finishing in 14th place with a time of 16:20.9.

Ridgeline had all five of their top runners among the top 48 finishers at the 4A Boys State Cross Country Championship. That was good enough for the fourth-year school to place fifth — its highest finish at the state meet.

“We tried to leave it all out there, no regrets,” said Riverhawk senior Quinten Wright, who placed 14th individually in 16 minutes, 20 seconds. “... I love this team. They are great. They ran their hearts out today. I couldn’t ask more of them.”

The previous best mark for the Ridgeline boys was sixth in 2016.

Stansbury won the title with 50 points, having three runners among the top nine finishers. Cedar was second with 70, followed by Desert Hills (91), Pine View (117) and Ridgeline (147) to round out the top five.

Wright was 39th a year ago, so the senior made a big jump to nearly make the top 10.

“I usually run crappy here (state),” Wright said. “This was the best by far for me. I was slower than region.”

Not far behind Wright was teammate Teyvin Broadbent. The senior was 24th with a time of 16:32.

“I was about in 50th after the start, so I had a lot of places to pull up,” Broadbent said. “... My approach was to try and leave every inch of my training out there. ... we’ve done pretty good. I’m proud of the guys and we left it all out there.”

“They all ran well,” Kirby said of the Riverhawk boys. “They came in right next to each other. That’s how you score points

And like the girls, the boys ran in brand new white jerseys. There is no big story behind the new uniforms. They were supposed to be used for the 2019 season but didn’t arrive in time, so Kirby saved them for state.

“Coach broke them out for us today, so that was kind of fun,” Wright said of the new uniform.

The beginning is a mad dash to get to the first turn as the course narrows considerably. It can be key to get out and not get buried.

“Sometimes it’s worth it to go out a little harder and not get stuck in the bottleneck,” Wright said. “Sometimes you go out too hard. I may have. It appears I did, but it’s better than getting stuck.”

Wright, Logan’s Alex Rasmussen and Ian Bressel, O’Very and Green Canyon’s Branson Sharp were all toward the front early on as the pace was slower than usual for the first mile and a half. The top three finishers ended up made a move up a hill.

“We were in a big clump, but then those leaders took off,” Wright said. “I was like, ‘here we go.’ It got rough after that.”

“It was super fun having Quin on my left and Ian there,” Rasmussen said. “I knew it was going to be a good race.”

Right behind Wright from Region 11 was Rasmussen in 17th (16:22), Sharp in 18th (16:23) and O’Very in 20th. Missing was Bressel, who was not able to finish after running most of the race near the front. His exact status was not known.

“I really don’t know what happened to Ian,” Rasmussen said. “I really want to go look for him. I didn’t see him and I hope he is okay.”

Rasmussen compared his last race to the Avengers movie. He was not happy with how he finished at the region championship a week ago.

“I called everything in and did the best that I could,” said Rasmussen, who had his best finish ever as a senior. “I finished the best I could and had a lot of fun with it. ... It was a really fun race and a great season.”

Jared Hunt led Sky View. The senior battled back from an injury and finished 34th in 20:10.