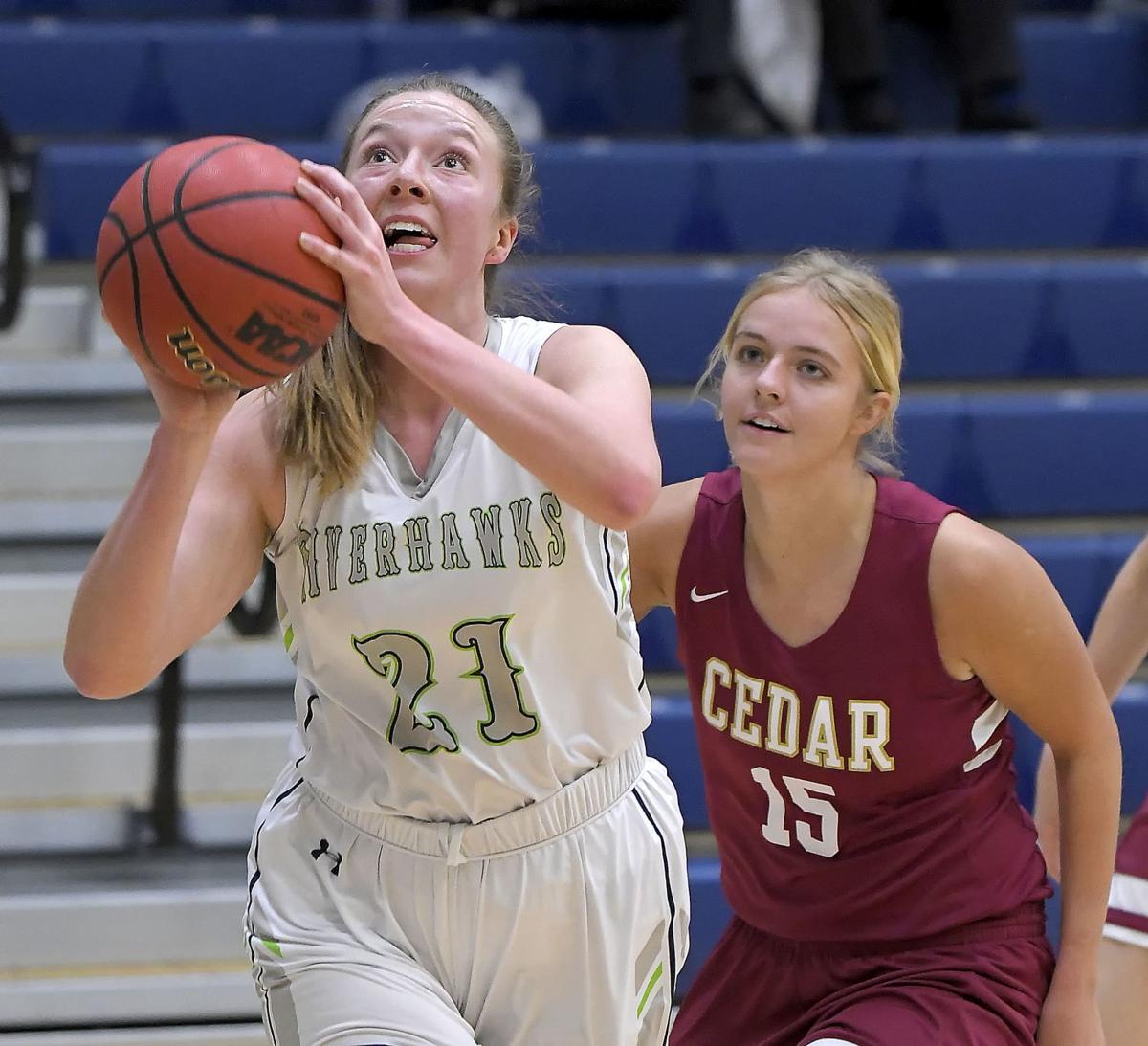 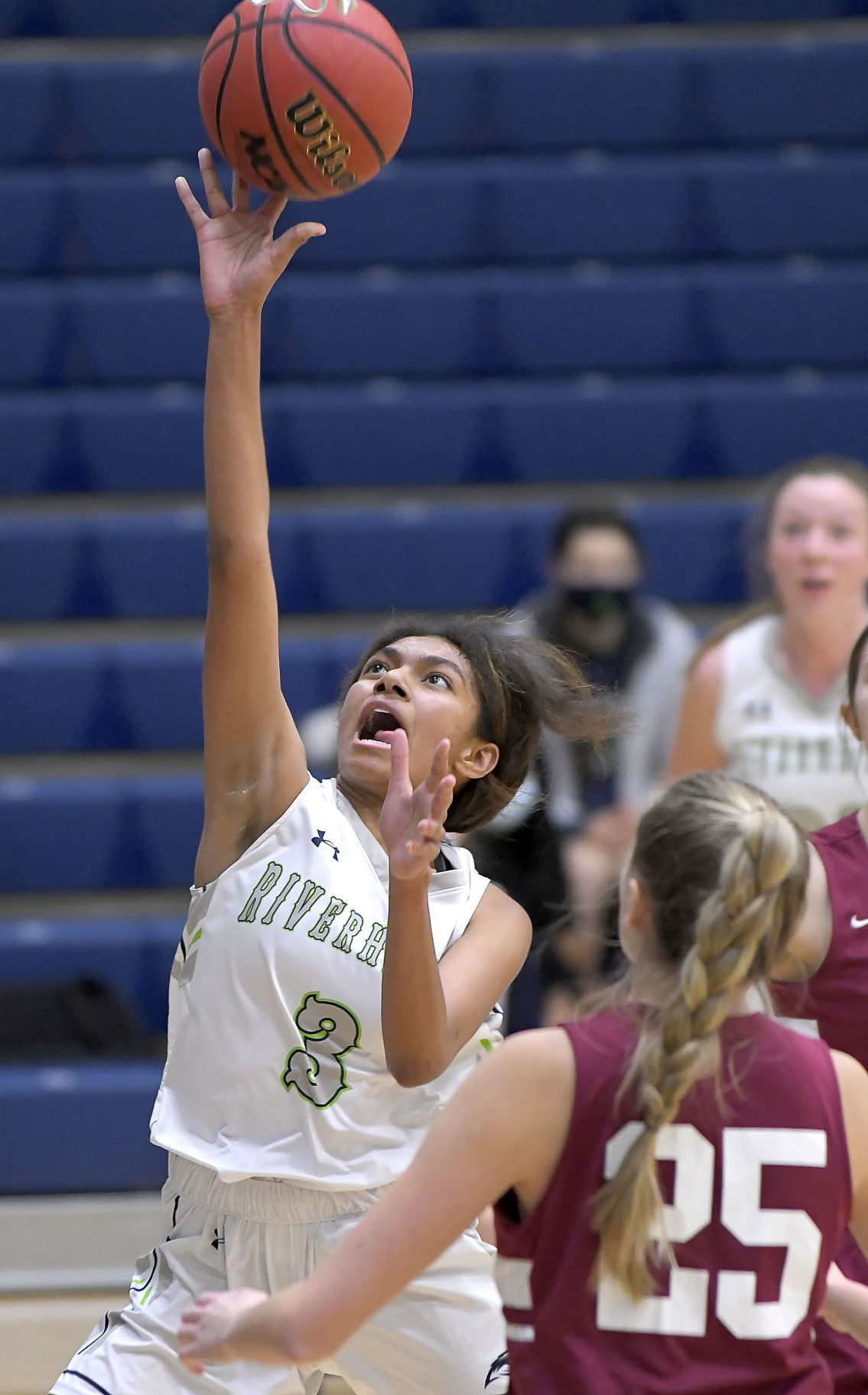 MILLVILLE — If you hold a team to a single point in a quarter of high school basketball, your chances of winning are pretty high.

That’s exactly what the Riverhawk girls did Friday night. It was enough to propel them to a 53-48 win against two-time defending 4A state champion Cedar City.

“I felt like we did a really good job playing as a team,” said Ridgeline senior Sarah Litchford, who finished with a double-double with 23 points and 10 rebounds. “... They (Reds) beat us in the state championship my sophomore year. I know me and Haley (Anderson) wanted redemption in this game. But they are good.”

Sure, the Reds (0-3) are not the same team they have been over the past few seasons. However, the program is a winning one and made a game of it in the fourth after trailing by 16 early in the fourth quarter.

“When you play programs that have a winning culture, you are going to get a game no matter where they may be at, because they did lose some girls,” Riverhawk head coach Ainsli Jenks said. “They do have some good girls back. Ultimately, they know how to win. ... No matter what year it is, you expect to have a game against a program like Cedar.”

Trailing 28-27 at halftime, Ridgeline (2-2) had not scored over the final three minutes of the first half. The Riverhawks wasted no time in ending their scoring drought. Litchford scored to trigger a 10-0 spurt by the hosts. Ridgeline would never trail again.

“Sarah just had that drive tonight,” Jenks said. “It’s awesome to have her back, her leadership, her basketball knowledge. She is such a positive, good influence. She works really, really hard.”

The Reds could not buy a bucket. The visitors missed all 13 field goal attempts in third quarter and had three turnovers. How did the Riverhawk coach spark her team to start the second half?

“We reminded them that defense was big, but really our focus was on rebounding,” Jenks said. “We can’t give teams second shots. We focused on getting rebounds, keeping them in front and the big thing is trusting their teammate to do their job.”

Cedar City went more than nine minutes without scoring from the end of the second quarter to near the end of the third. When the Reds did dent the scoreboard, it was a single free throw.

Ridgeline took a 40-29 lead into the final period as Macie Brown had seven of her 11 points in the third quarter. Litchford had five rebounds and blocked a pair of shots in the third.

“I wanted to focus on rebounding because I’ve been struggling with that a little bit,” Litchford said. “I knew I needed to get up and get as many as I could.”

Litchford drilled a 3-pointer to start the fourth as the Riverhawks scored the first five points of the final period for their largest lead of the game, 45-29.

The Reds did not go quietly. They ended a field goal drought of 12-and-a-half minutes with a bucket by Haylee Campbell. Cedar City then preceded to score eight straight points. Abby Davis, who led the Reds with 17 points despite playing in foul trouble, nailed a 3-pointer to pull Cedar City within 45-37.

A layup by Braylee Peterson, who finished with 12 points for the Reds, made it a six-point game with 45 seconds to play. As Cedar City went to fouling, precious seconds ticked off the clock. The Reds needed to foul three times to send the Riverhawks to the line.

Haley Anderson was a perfect 6 of 6 at the foul line in the fourth quarter and made four free throws in the final 29 seconds to help seal the victory.

The Reds did hit a 3-pointer at the buzzer to make the final score closer.

The Riverhawks got off to a nice start in the first quarter, building a seven-point lead at one point and taking a 16-11 advantage into the second. Litchford had 10 points in the first.

“My teammates were making really good passes and spacing the floor so I could get open pretty easily,” Litchford said. “They did a really good job of hitting me when I was open.”

The Reds used a 7-0 run to tie the game. In the second quarter there were seven lead changes and two ties. Peterson banked in a 3-point shot to give the visitors the lead at halftime.

But then it was all Ridgeline in the third.

It was a nice bounce-back win for the Riverhawks who suffered a 20-point loss to Lehi on Thursday.

“We have a lot of things we need to improve on,” Litchford said. “We haven’t even begun to reach where we can be as a team. Potentially, we could be pretty good.”

Green Canyon and Sky View completely dominated their opponents, while Preston lost a 53-52 heartbreaker to Snake River in the semifinals of its annual tournament. The Wolves thumped Hillcrest 72-27 at home, and Sky View rolled past East 71-41 on the road.

Maren McKenna went off for 29 points and nine rebounds for the Wolves, who got 15 points and six boards from McKenna Crane, nine points from Madilyn Peterson and five assists from Landree Spackman.

Green Canyon (4-0) jumped out to a 22-7 lead over Hillcrest and limited the Huskies to nine points or fewer in every quarter.

“Our defense definitely set the tone,” GC head coach Alexis Bird said. “The girls worked hard together to get big stops, which fueled our offense. Another great team win.”

Like McKenna, Kaytlin Smart was unstoppable offensively. Smart poured in 26 points for the Bobcats, who got 14 points from Melanie Hiatt and 13 from Hannah Radford.

“We were able to jump on them early,” SV head coach Vanessa Hall said. “In the first half, we were able to capitalize on transition points and offensive rebounds. Kaytlin Smart and Hannah Radford both had great games scoring the basketball. It was a good team win.”

Preston (6-2) was led by Kylie Larsen and Mikayla Robertson, who combined for 33 points on 13 of 22 shooting from the field. Hailey Meek chipped in with eight points. Larsen paced Preston with five rebounds, and Robertson dished out a team-high four assists.

It was a great night for the local boys teams in action. Sky View and Ridgeline won handily, while Logan and Green Canyon earned hard-fought wins.

“I loved our kids’ effort,” SV head coach Kirk Hillyard said. “We played hard for four quarters tonight. Our size gave them fits all night. Jackson and Evan did a great job inside finishing, and Bracken (Schumann) was a force on the boards and with blocked shots. Our guards put a ton of pressure on them, which led to a lot of tipped balls and steals. Overall fun game to watch for the few fans in attendance and for the players to play in.”

Ridgeline (3-1) outscored Skyline 18-2 in the opening quarter en route to its third straight win — this one on the road. Peyton Knowles finished with 19 points for the Riverhawks, who got 12 from Chase Hall and 11 from Spencer Adams.

“I was really pleased with our defense,” RHS head coach Kyle Day said. “We only gave up two points in the first quarter to set the tone. We showed a ton of aggression offensively and had some really nice balance again. Our shooting wasn’t there tonight, but we made up for that with relentless play.”

Logan handed Bonneville its first loss of the season. The Grizzlies outscored the visitors 21-11 in the first quarter and held off a late Laker charge.

Jadin Penigar led the Grizzlies (3-1) with 16 points, followed by Will Jensen with 13 and Oliver Hashimoto with nine.

“We played with a lot of energy tonight,” LHS head coach Logan Brown said. “I really liked how we came out swinging. Our first quarter really set the tone for the game against a solid Bonneville team. Kyle always gets his kids to play hard. We also had some guys step up for us. Will was a big part of that in the first half. We also guarded well tonight.”

Green Canyon kept its perfect record intact by dispatching of Minico (Idaho) 43-37. The visiting Wolves (3-0) outscored the Spartans in every quarter except for the second.

Brady Smith netted a team-high 16 points for the Wolves, who got a combined 17 points from Jace Blotter and Cade DeBoard.

“That was a battle,” GC head coach Dan McClure said. “Minico tried to ugly the game up against us and I liked how we responded. I like how we battled through some missed shots and some frustration, and were able to maintain our composure late. Really proud of our guys.”

Mountain Crest was originally scheduled to play at Tooele, but the game was canceled due to an uptick of COVID-19 cases at Tooele.