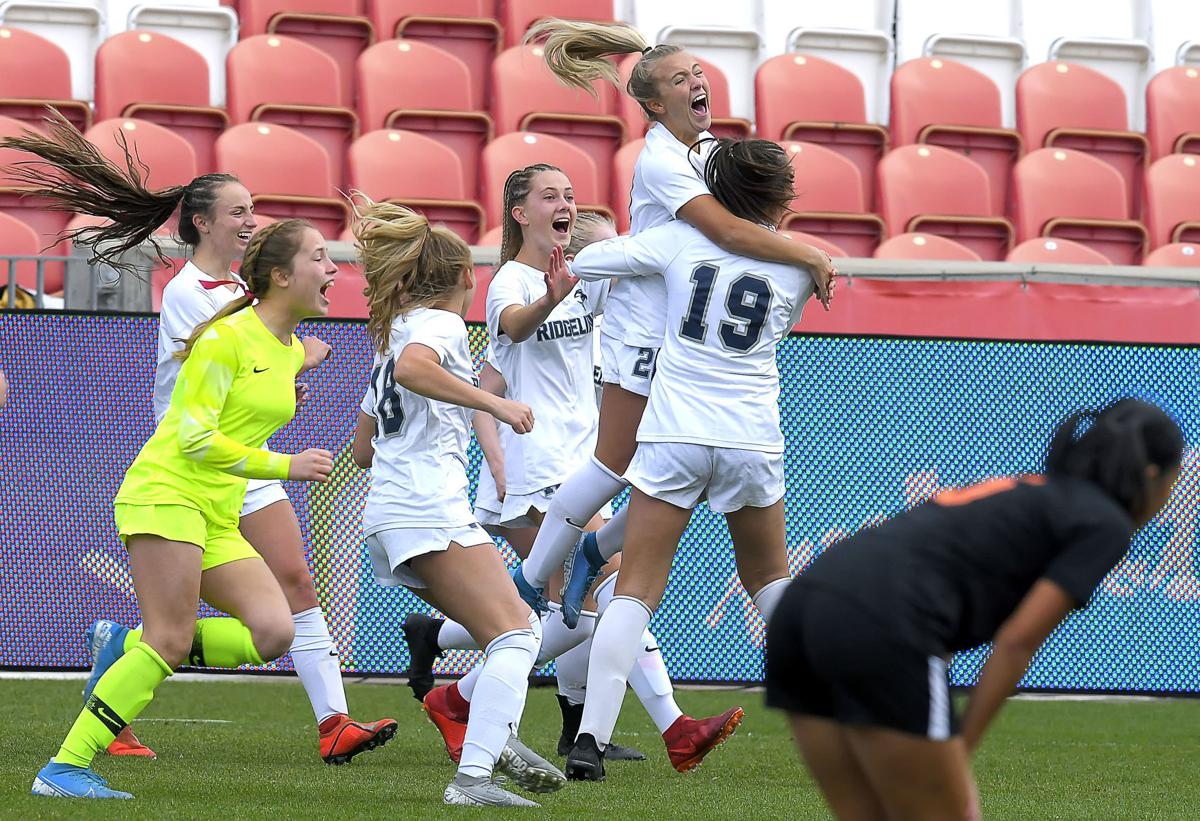 Ridgeline players celebrate defeating Ogden 3-2 to win the 4A girls soccer championship on Friday in Sandy. 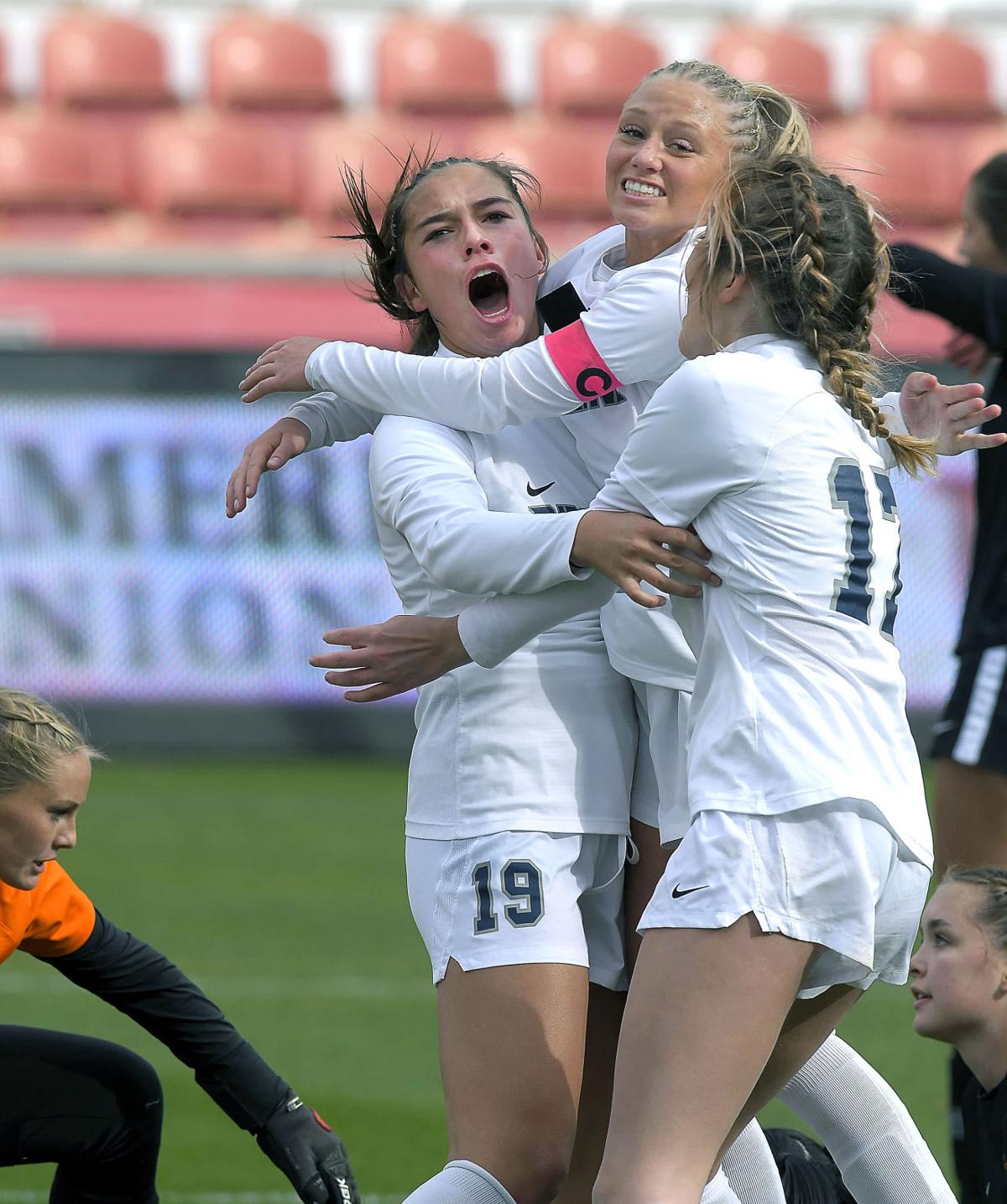 Ridgeline's Adeline Fiefia (19) celebrates with Tenzi Knowles and Marley Guevara after she scored the game winning goal against Ogden in the 4A championship soccer game on Friday in Sandy. 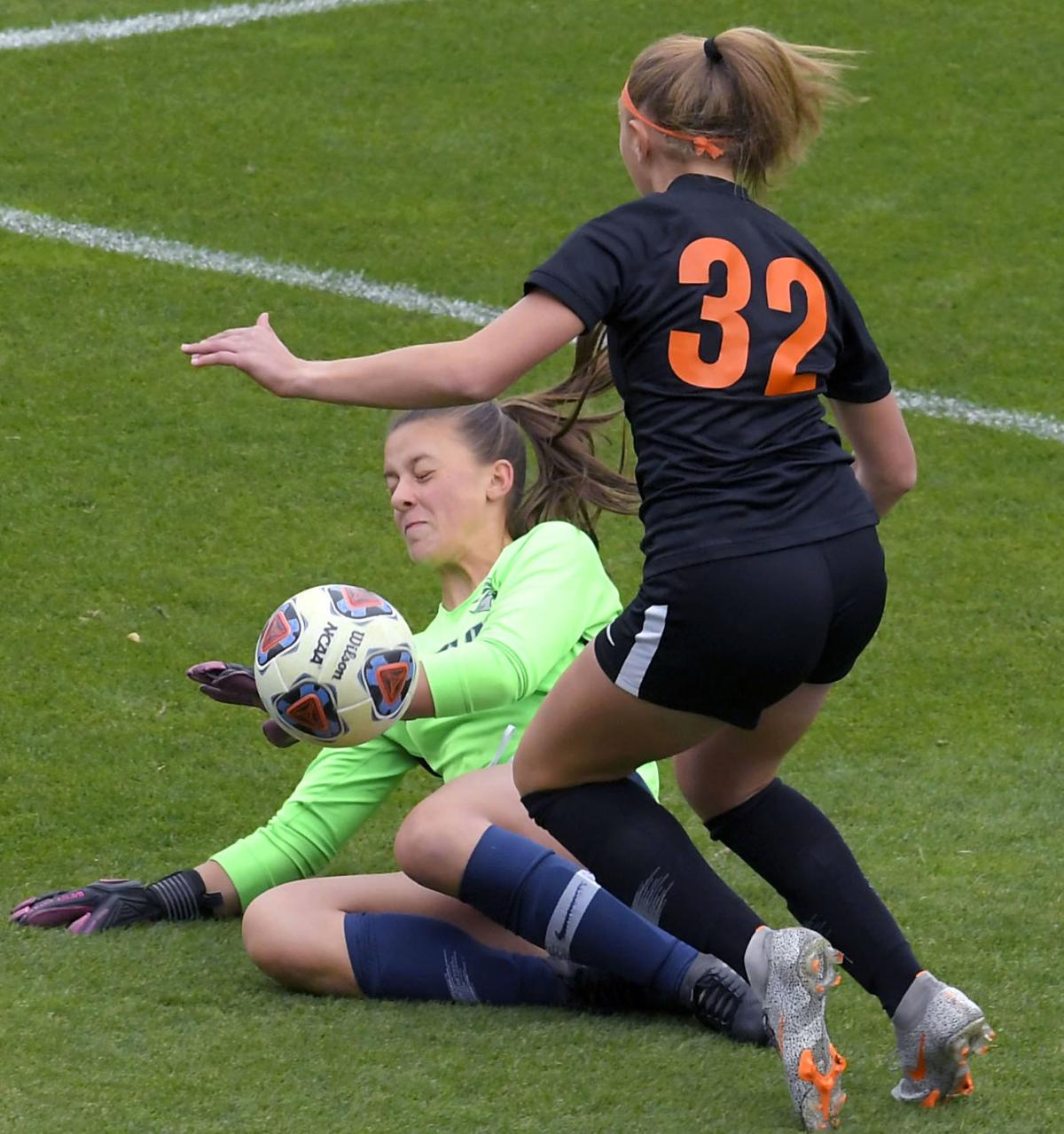 Ridgeline players celebrate defeating Ogden 3-2 to win the 4A girls soccer championship on Friday in Sandy.

Ridgeline's Adeline Fiefia (19) celebrates with Tenzi Knowles and Marley Guevara after she scored the game winning goal against Ogden in the 4A championship soccer game on Friday in Sandy.

SANDY — There’s no doubt the short-handed Riverhawks could have panicked after trailing the defending state champions four minutes into their biggest match of the season, but they didn’t.

There’s no question Ridgeline could have flinched after Ogden equalized midway through the second half, but it didn’t. Instead, the short-handed Riverhawks, missing three-year starting forward Halle Van Yperen to a knee injury, steadied the ship and earned their biggest victory in program history.

Adeline Fiefia crashed the goal and buried a rebound in the 76th minute — her second game-winning goal in as many days — to propel Ridgeline to a heart stopping 3-2 triumph over No. 1 Ogden in the finals of the 4A Girls Soccer Championship on Friday afternoon at Rio Tinto Stadium. Fiefia was one of many heroes for the No. 3 Riverhawks, who ended the season on a 10-game winning streak.

“I’m very proud of the girls,” RHS head coach Mark Tureson said. “I’m proud of how well they dug in and fought for each other. It was just a total team win and I think that’s the thing that’s the most exciting thing is we did it as a team. The girls on the bench, all the way out to girls that played the whole game, it was a team effort.”

In the process, the Riverhawks (15-6) were able to earn some sweet revenge against the Tigers (16-2) in a rematch of last year’s 4A title showdown. Ogden, which had its 16-game winning streak snapped Friday, won that match 2-1.

“I feel like last year we didn’t compete to our full potential ... so I’m happy,” RHS senior midfielder Marley Guevara said. “Even if we wouldn’t have won, I’m happy that we just fought to the very end and showed that we can compete with them and that we can beat them. ... It was pretty sweet to get some redemption against them.”

It wasn’t looking good for the Riverhawks in the early going, even though they dictated play during the first few minutes of the match. The Tigers barely possessed the ball during that stretch, but pieced together a gorgeous box-to-box counter attack to take a 1-0 lead. The final of at least seven passes found the feet of Tori Kalista, who deposited a lovely shot from outside the 18-yard box into the upper 90 of the far post.

Friday’s showdown was a compelling contrast of styles. It’s doubtful Ogden faced a team this season that strung together passes as well as Ridgeline, and no 4A side the Riverhawks squared off against transitioned as well as the Tigers. Additionally, both teams have multiple future Division I players on their roster and are very well organized defensively, which set the stage for an epic championship match.

“Very compelling (matchup),” Tureson said. “Again, the strengths that (Ogden) had, I felt very confident that our defense could manage it and handle it, and track runs. And that’s one of the benefits of playing in such a good region and that was our lot game in and game out against some region teams that were so good at (transitioning). Our region completely prepared us for today, completely prepared us.”

Both teams were able to assert their style of play at times, but ultimately the Riverhawks created more scoring opportunities as they took more shots (16-9), shots on goal (10-7) and corner kicks (5-3).

Even though there were five goals in this match, both teams defended very resolutely. Ridgeline received a big performance from its starting backline of Haley Anderson, Carly Eubanks, Alex Baer and Caitlyn Parry, plus Brenli Wolford shined from her defensive midfielder position. Ogden has two talented and extremely pacey attacking players in Kalista and Abby Beus, and neither of them ever got behind the Ridgeline defense in a dangerous spot.

The Riverhawks appeared to be a little shell-shocked for a couple of minutes after Kalista scored but, to their credit, they bounced back in a hurry, and it was Guevara who got them on track. It was a magical moment for the senior, whose stunning 30-yard shot curled into the back of the net in the 30th minute. Simply put, the goals by Kalista and Guevara were world class strikes.

Ridgeline struck again less than seven minutes into the second half when senior Oakley Rasmussen unleashed a 25-yard kick free off crossbar, and Tenzi Knowles was there to punch in the rebound. Like they were all season long, Knowles and Rasmussen were dynamite in the attack Friday.

All of a sudden, it was the Tigers who had to chase the match — something they’ve rarely had to deal with this season — but they handled it well. Ogden pulled even at 2-2 when Ridgeline goalkeeper Alivia Brenchley couldn’t quite corral a hard-driven free kick by Adelyn Bower. Brenchley made a huge save on the first rebound, but Kalista was there to clean things up for her 22nd goal of the season.

Brenchley, who made some big plays when called upon in the semifinals and finals, was injured on that sequence and left the match for about 10 minutes. Lily Loyet replaced Brenchley in goal during that time.

Another knucking free kick by Rasmussen led to the game-winning goal, and it was a carbon copy of Ogden’s second goal. Ogden standout keeper Allison Collingwood wasn’t able to cleanly handle Rasmussen’s ball. Collingwood then stoned Guevara on a shot from inside the 6-yard box, but Fiefia was there to bury the third-chance opportunity.

“I think for our team to know what Oakley’s going to do and what she’s capable of with free kicks to make it so difficult on the goalie, it was absolutely intentional to flood the goal when she hit those shots,” Tureson said. “And either she could get them in (the goal) direct or the goalie has a difficult time and we’re there to clean it up, and that was something that we worked on toward the end of the season.”

Fiefia praised the Ridgeline coaching staff for their efforts in helping the team peak at the right time.

“I’ve got to hand it to our coaches because they helped us get here,” said Fiefia, who was one of several Ridgeline players who came up huge off the bench in the playoffs. “(It was) not only us lifting each other up, but our coaches really helped us to get to where we needed to be in training, pushing us, so kudos to them and thanks to them.”

Ridgeline dominated No. 10 Pine View for most of their semifinal game, but the Panthers defended well enough to stay alive. The Riverhawks scored the match’s lone goal in the 35th minute to punch their ticket to the finals.

Ridgeline finally broke through when Knowles deftly beat a couple of Pine View defenders off the dribble, got the end line and delivered a pass to feet right in the heart of the 6-yard box. The Riverhawks’ first shot was saved, but four of their players were in the mix for the rebound and Fiefia was created for the easy tap-in at the left post.

The Panthers (11-8) only managed one shot in the second half and it was a harmless one. As a result, the Riverhawks were able to secure their ninth clean sheet of the season.

“It feels really good,” Eubanks said. “I mean, our offense is our first line of defense, so it’s not just our backline, it’s our entire team as one. We depend on every single one of the players as much as they depend on us, so it’s definitely a team effort, just stepping up as a unified front.”

Ridgeline had several opportunities to net an insurance goal, including a nice one-time effort by Guevara that rattled the crossbar. Knowles set up that scoring chance and a handful of others throughout the night as the Utah State commit used her speed, skill and work rate to take advantage of Rio Tinto’s wide pitch.

“I love it. It’s like a dream,” Knowles said. “It just doesn’t even seem real, but it’s just so fun with all the fans and it’s just so loud here, and it definitely hypes us up a lot. And I feel like it kind of brings the level of soccer up a bit higher.”

The Riverhawks finished with a commanding 24-4 advantage in shots in the contest. Brenchley came up with a huge reaction save in the first half for Ridgeline. The Panthers had a very difficult time dealing with Rasmussen, who finished with nine shots and consistently carved out space for herself.