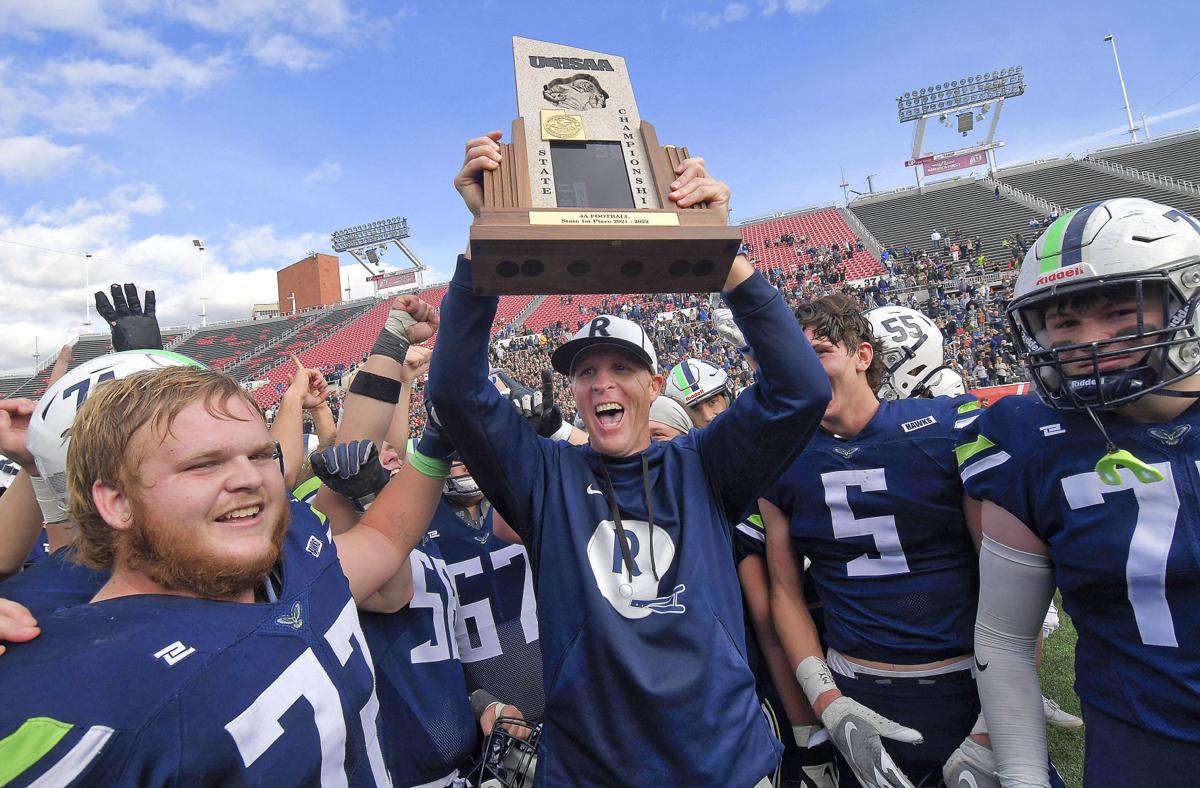 Ridgeline head football coach Travis Cox celebrates with players after they defeated Dixie 45-20 to win the 4A state title on Friday in Salt Lake City. 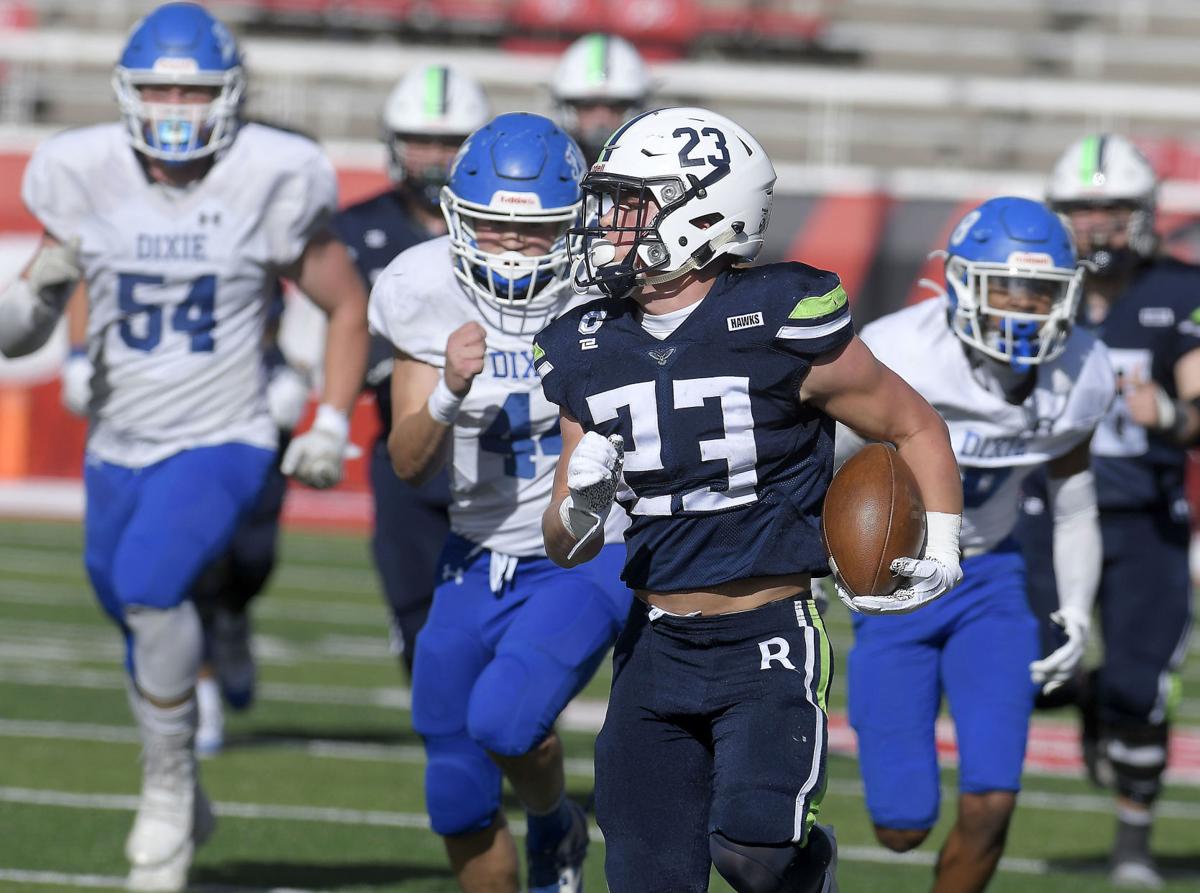 Ridgeline running back Noah White runs down the field for a 73-yard touchdown against Dixie in the 4A championship football game on Friday in Salt Lake City. 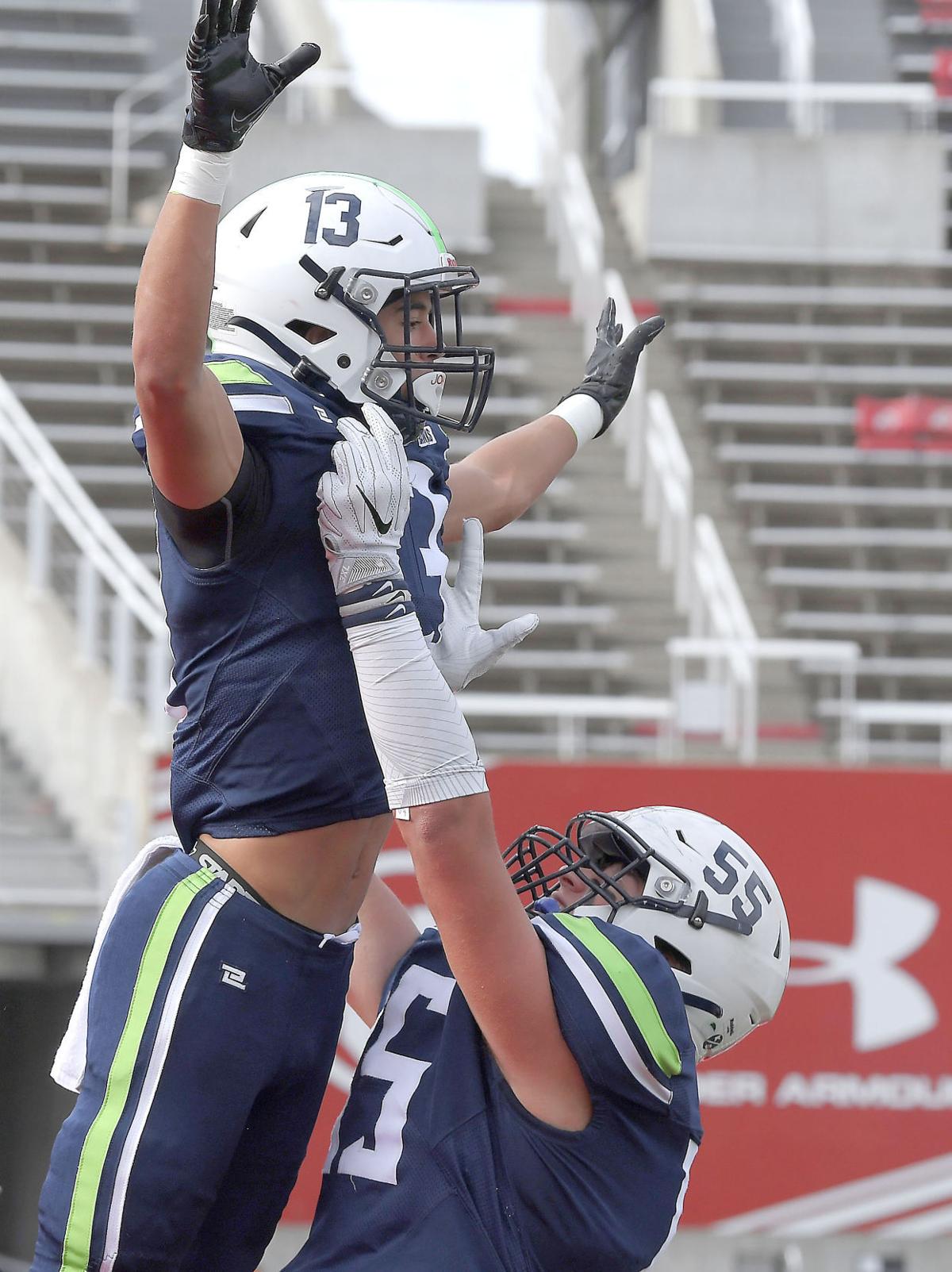 Ridgeline wide receiver Braylon Majors (13) celebrates with lineman Jake Alles after scoring a touchdown against Dixie in the 4A championship football game on Friday in Salt Lake City.

Ridgeline head football coach Travis Cox celebrates with players after they defeated Dixie 45-20 to win the 4A state title on Friday in Salt Lake City.

Ridgeline running back Noah White runs down the field for a 73-yard touchdown against Dixie in the 4A championship football game on Friday in Salt Lake City.

Ridgeline wide receiver Braylon Majors (13) celebrates with lineman Jake Alles after scoring a touchdown against Dixie in the 4A championship football game on Friday in Salt Lake City.

SALT LAKE CITY — There are no more games for Ridgeline’s football team this year.

And the Riverhawks are just fine with that.

The Millville-based school capped off a perfect season Friday afternoon at Rice-Eccles Stadium on the campus of the University of Utah and in the process captured the 4A State Football Championship. Ridgeline scored first and never looked back against Dixie, rolling to a 45-20 win.

“This is super huge for us,” said Riverhawk quarterback Kaden Cox, who passed for 355 yards on 26 of 36 passing with five touchdowns. “Our seniors have been together for 10 years. It’s been one heck of a ride. I wouldn’t have wanted to go out any other way with this group of guys. It’s been super fun this year. ... There is nothing like this moment.”

It is the first state title in the sport for the school.

“It’s a surreal feeling,” Ridgeline head coach Travis Cox said. “You can’t really dream this stuff up. For us to have an undefeated season and win it like we did today, I’m a lucky person. I feel very blessed to be around this group of kids. This is a special group of kids and a great team.”

Ridgeline (13-0) punted just once and turned the ball over on downs on its last possession of the game. It was a dominating game by the Riverhawk offense, as it finished with 570 yards of total offense, which ranks sixth in a championship game.

“The offense has been incredible all year,” coach Cox said. “They have been clicking all year. We knew we had a lot of talent coming in, but it all starts with the five guys up front. Those five have been special, then you starting putting others into the mix ... it’s a great, resilient group, a great team.”

Running back Noah White rushed for 209 yards on 30 carries and scored twice. The 209 yards on the ground rank 13th in a title game.

“We passed the ball and ran it,” White said. “He (Kaden Cox) is unbelievable. I can’t say enough about him. He makes my life easy.”

Kaden Cox completed passes to eight different teammates. Jackson Olsen hauled in six passes for 75 yards and a TD before an injury knocked him out of the game. White caught seven passes for 54 yards, while Strat Simmons made five receptions for 92 yards and two scores.

“The O-line has been working hard all season,” White said. “They don’t get enough credit. They powered us through.”

“We just came together,” Lundahl said. “We have great coaches in Jarom (Iaone) and (Dave) Kuresa. As a group, the starters and the back ups came together as a family. That really helped us work well together.”

Dixie (9-4) had 349 yards of offense. The Flyers were led by quarterback Bronson Barben as he threw for 207 yards and a score on 16 of 32 passing. Jakheo Mitchell caught six passes for 103 yards.

Defensively, Cameron Craney led the Riverhawks with eight tackles, while Luke Sorenson made seven stops, including three for a loss and a sack. Ashton Macfarlane broke up three passes and returned a fumble 35 yards to help set up a score late in the third quarter.

“Our defense heard all week that we are soft and can get run on,” coach Cox said. “They took a personal challenge this week.”

Ridgeline won the coin toss and elected to take the ball. It took just over two minutes for Ridgeline to dent the scoreboard. The Riverhawks took the opening kickoff and drove 80 yards in five plays to paydirt. Cox scrambled out of trouble and found a wide open Braylon Majors, who caught the ball at the opposing 40-yard line and easily completed the 68-yard score on a third-and-9 play.

“We are a good offense,” Simmons said. “It’s hard to stop our offense. We’ve got so many weapons.”

After trading punts, the Flyers drove 86 yards in 11 plays. Barben scrambled for a 9-yard TD. The extra-point kick failed.

It took the Riverhawks less than a minute to reach the end zone for the second time. White broke free for a 73-yard TD run with 1:12 left in the opening quarter.

“I wish I could have broke a couple of more, but I’m super excited to have that one,” White said. “That one goes to the O-line. It was third down and we had to get it.”

White got more than the three yards needed for the first down. The Riverhawks were efficient all game on third downs, converting 12 of 16 and also picked up first downs on 2 of 3 fourth-down plays.

“I know we will get those because the O-line is going to get a push,” White said. “I just hit it super fast. ... I just try and read my blocks and get the extra yard.”

“Noah’s big run was a confidence booster,” Lundahl said. “That really got us going and helped us push. ... We all work together and are such a team.”

Ridgeline was on the move again after forcing a punt. The Riverhawks converted a fourth-and-2 deep in their own territory to keep an 11-play, 84-yard march alive. It was capped with a 13-yard TD pass from Cox to Olsen.

The Flyers turned the ball over on downs after Simmons broke up a pass in the end zone.

Ridgeline had plenty of time to put another score on the board. The Riverhawks converted a third-and-14, a third-and-10 and a fourth-and-4 on their way to a 14-play, 90-yard march. White ran in from five yards out to give the Riverhawks a 25-6 lead at halftime.

“I love having Noah White; he can catch it, run it,” Kaden Cox said. “I don’t know how he does it sometimes, but he is one remarkable running back.”

Ridgeline had 361 yards of total offense over the first 24 minutes, while Dixie had 151.

The Flyers wasted no time trying to get back in the game. They took the kickoff to start the second half and went 64 yards in less than two minutes. Seth Takau scored from 20 yards out on the ground to pull Dixie within 25-12.

Ridgeline didn’t flinch one bit and scored on its first three possessions of the second half. Cox hit Simmons on scoring passes of 14 and 22 yards. The Riverhawk signal caller then found Will Booth for an 8-yard TD pass, building a 45-12 lead with 7:50 left in the game.

“It was amazing,” Simmons said of his scoring catches. “State championship, two touchdowns. It’s all you want. ... Kaden is a player and gets you the ball.”

The Flyer tacked on a late TD when Derek Kesterson caught a 9-yard TD pass from Barben. Dixie was knocking on the door again in the final seconds, but on the final play of the game Macfarlane batted away a pass in the end zone to ignite the celebration.

“This is something we have all dreamed of since we were freshmen,” Simmons said. “It’s a fun feeling.”

Ridgeline is tied for fifth in state history for the youngest school to win a state football title in its sixth year of existence. Highland, Juan Diego and Snow Canyon won in their third year, while Mountain Crest won in its fifth season.

“I got a little emotional out there,” Lundahl said. “I probably will again. It’s been a good year.