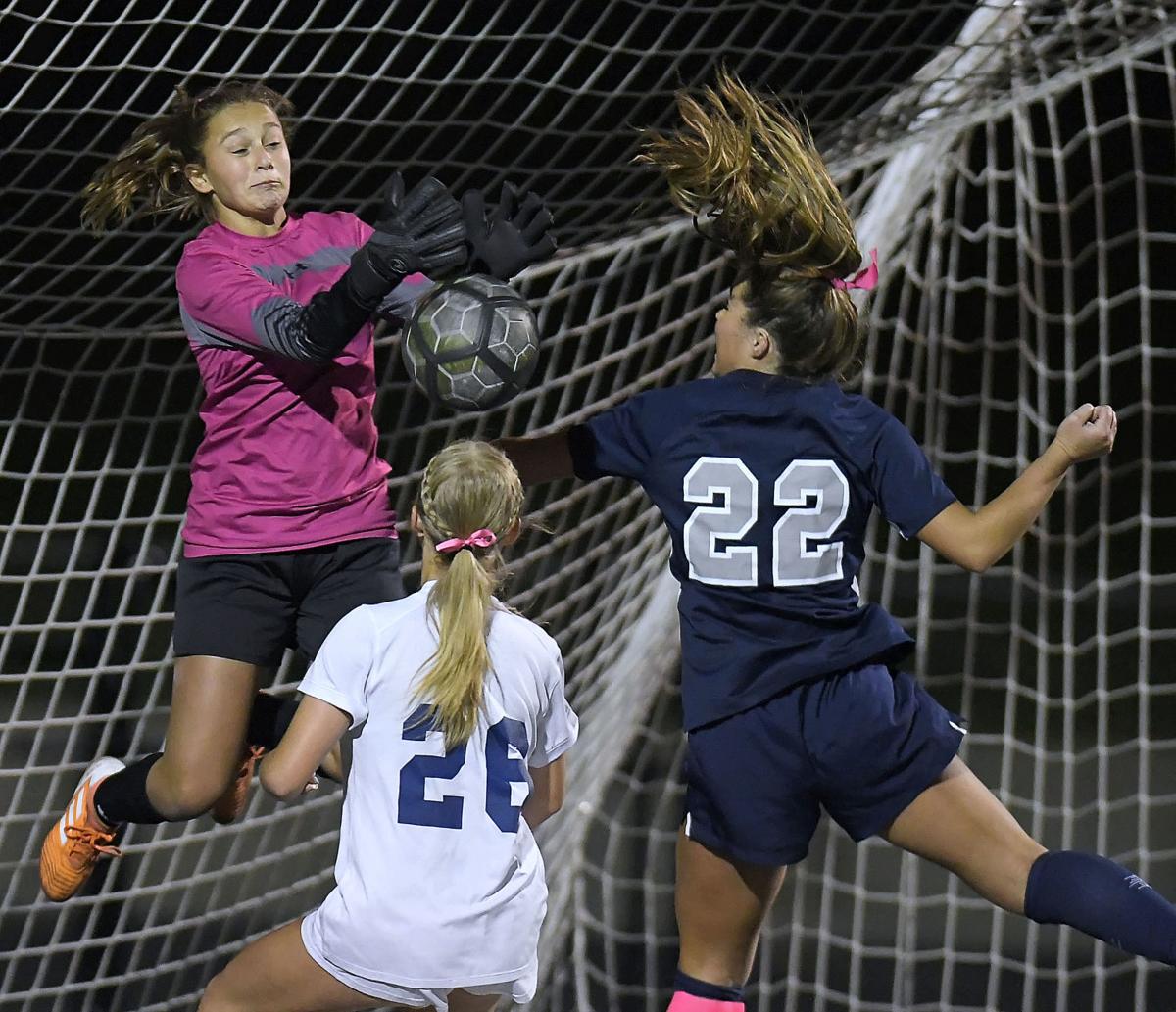 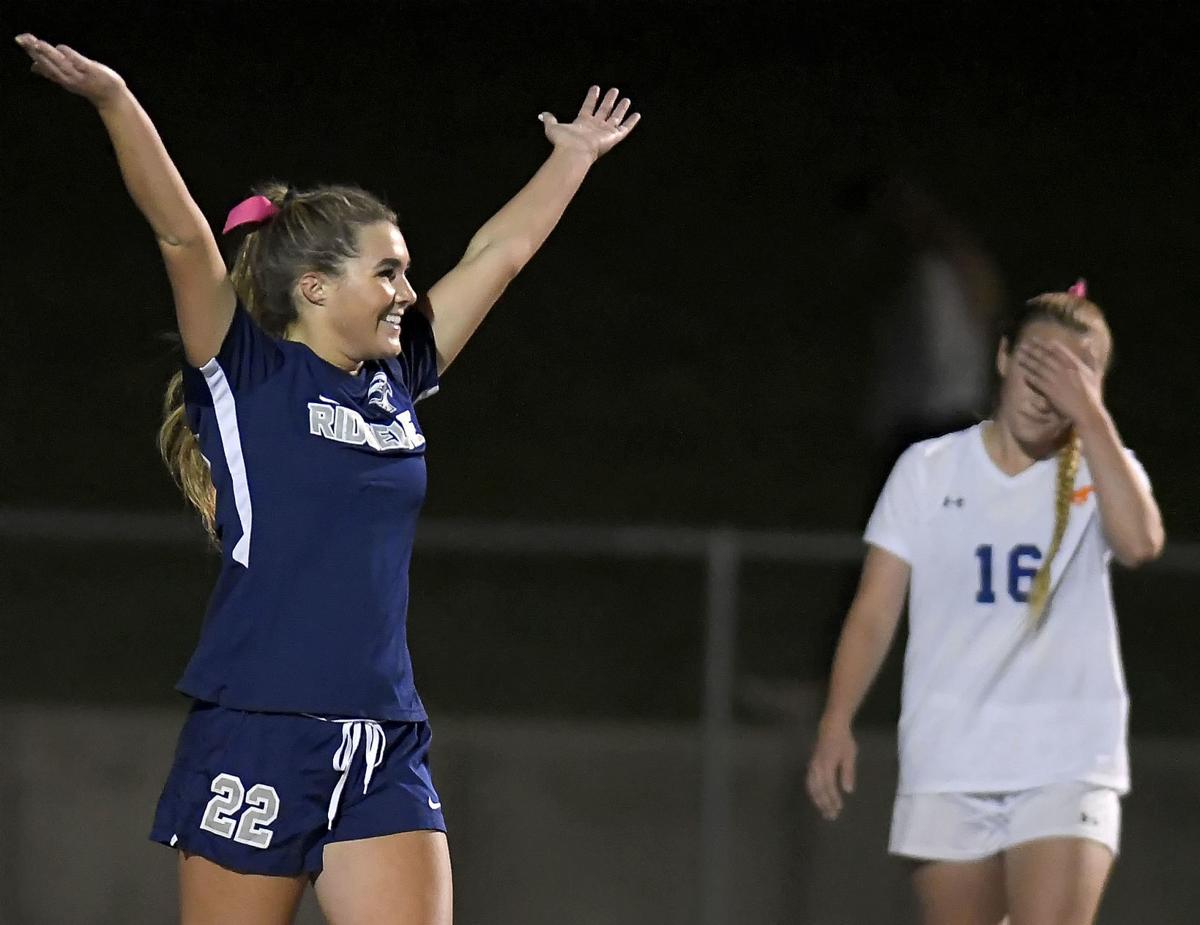 Ridgeline's Halle Van Yperen (22) celebrates after scoring a goal against Mountain Crest on Tuesday in Millville.

Ridgeline's Halle Van Yperen (22) celebrates after scoring a goal against Mountain Crest on Tuesday in Millville.

MILLVILLE — For the first time since Sept. 15, the Riverhawks faced a deficit in a Region 11 girls soccer match, but they didn’t panic.

Instead, Ridgeline equalized one minute later and used a strong second half to pull away from Mountain Crest, 5-2, in the regular season finale for both teams. In the process, the Riverhawks were able to defend their region title and they won it outright because Green Canyon lost in a shootout to Logan.

“I think going into the state tournament, (facing a deficit) is a realistic scenario, and how our girls responded (was awesome),” RHS head coach Mark Tureson said. “Their heads didn’t drop. They looked at each other, they dug in with each other and, out of those goals, we played some of our better soccer. ... That’s what I’m most proud of is we didn’t panic, we settled and that’s the response I want when we go down.”

The Riverhawks (11-6, 8-2) will head into the 4A State Championships with a six-game winning streak. Ridgeline has outscored the opposition by a 21-4 margin during that timespan.

The Riverhawks ended up prevailing in comfortable fashion, but they had to survive an early wave of Mustang momentum to earn the opportunity to pull away. Mountain Crest (8-8, 5-5) fired off five shots in the first 30 minutes of the match, including a penalty kick it skyed over the crossbar.

That fifth shot, however, resulted in a goal, and it was well earned by standout junior Baylie Baldwin in the 31st minute. No. 12 used her blazing speed to get inside the 18-yard box, deftly cut the ball inside to beat a defender and unleashed a shot that Ridgeline goalkeeper Alivia Brenchley was able to touch but not keep out of the net.

“The first 10, 15 minutes they had us on our heals,” Tureson said. “Their speed was flying at us and our girls were looking stunned.”

Ridgeline immediately bounced back, though, on a nice shot at the top of the 18 by Ellie Kotter. It was the momentum boost the Riverhawks needed as they took six shots in the final nine minutes of the half after only one in the first 31.

The hosts took a 2-1 lead into the half courtesy of a late penalty kick by Oakley Rasmussen.

Mountain Crest pulled even at 2-2 four minutes into the second half on a stunning 40-plus yard strike by Amelia Zilles just under the crossbar.

Once again, the Riverhawks were undaunted as they needed fewer than five minutes to retake the lead — this time for good. All three of Ridgeline’s goals in the second half were facilitated by superb wing play that resulted in end line crosses.

“I think that’s one of our top goal scoring opportunities throughout the season is we’ve going gotten those crosses in, but we would never finish,” RHS senior Marley Guevara said. “And so in this game we took what we all have been practicing and we actually applied it to the game, and just finishing those is so fun. And it’s a whole group effort.”

On the go-ahead goal, Rasmussen played a diagonal pass to outside back Alex Baer, who beat a defender off the dribble and whipped in a ball to the back post. Mountain Crest keeper Jade Harris wasn’t able to handle the hard shot/cross cleanly, and Halle Van Vperen was there to bury the rebound.

The Riverhawks struck again three minutes later with arguably their best goal of the match. Kotter made a fantastic run to the end line and found an unmarked Halle Miller, whose header was saved by Harris. However, Reese Heninger crashed the far post for an easy finish.

Ridgeline added the exclamation point in the 74th minute when Adeline Fiefia’s perfect end line cross found Van Yperen inside the 6-yard box and the senior converted for her second goal of the match.

“I was really happy with how we played in the first half,” MC head coach Amber Hyatt said. “If we play like for state, then we should go far. I’m very confident my team can beat anyone if we play like that. Unfortunately, I felt like we let down in the second half, especially when we got down a goal. I didn’t think it was a team effort during the second half, but as always I hope we can learn from it and go into the playoffs confident and ready to win.”

Logan placed third in the final region standings thanks to its gratifying victory over Green Canyon, while Sky View also won in a shootout.

The Grizzlies (11-6, 6-4) and Wolves (11-4, 7-3) were scoreless after 100 minutes, and the hosts prevailed in a shootout dominated by both keepers. Cadence Martindale made three saves for the Grizzlies, and Brooke Watkins came up with two “fantastic” saves for the Wolves, head coach Sven Rasmussen asserted.

Taylor Rose and Carlie Jenkins both converted from the penalty spot for Logan, while Emma DeBerard was Green Canyon’s lone scorer.

“It’s always fun to go in (to state) on a win, but I’m just proud of how our girls played tonight,” said LHS head coach Natalie Norris, whose side improved to 4-1 in shootouts this fall. “It was a battle the entire game. Green Canyon is a fantastic team. My girls showed me a ton of heart and effort tonight, and new we just need to keep our momentum going and see what we can do.”

Bear River (1-13, 0-10) took a 1-0 lead into the half against visiting Sky View, which got an equalizer from Laney Gibbons, assisted by Mia Morrison. The Bobcats dominated in the shootout as Macy Sickler, Amalia Fonua and Macy Hellstern buried their PKs, and Grace Glover saved all three of Bear River’s shots from 12 yards out.

Sky View improved to 2-0 in shootouts and has finished 8 of 9 attempts from the penalty spot.

“After these games where we have gone to a shootout, I for sure feel confident,” SV head coach Jillian Carver said. “It doesn’t come easy, but it feels good to be successful.”

There is a heavy Cache Valley presence at the top as Green Canyon (second), Ridgeline (third) and Logan (fourth) are three of the top four seeds. Sky View in ninth, followed by Mountain Crest (11th).

All five local teams have first-round byes in the 4A State Championships, which starts Saturday. The Wolves, Riverhawks and Grizzlies will all play next Wednesday at home, while the Bobcats and Mustangs will be on the road.