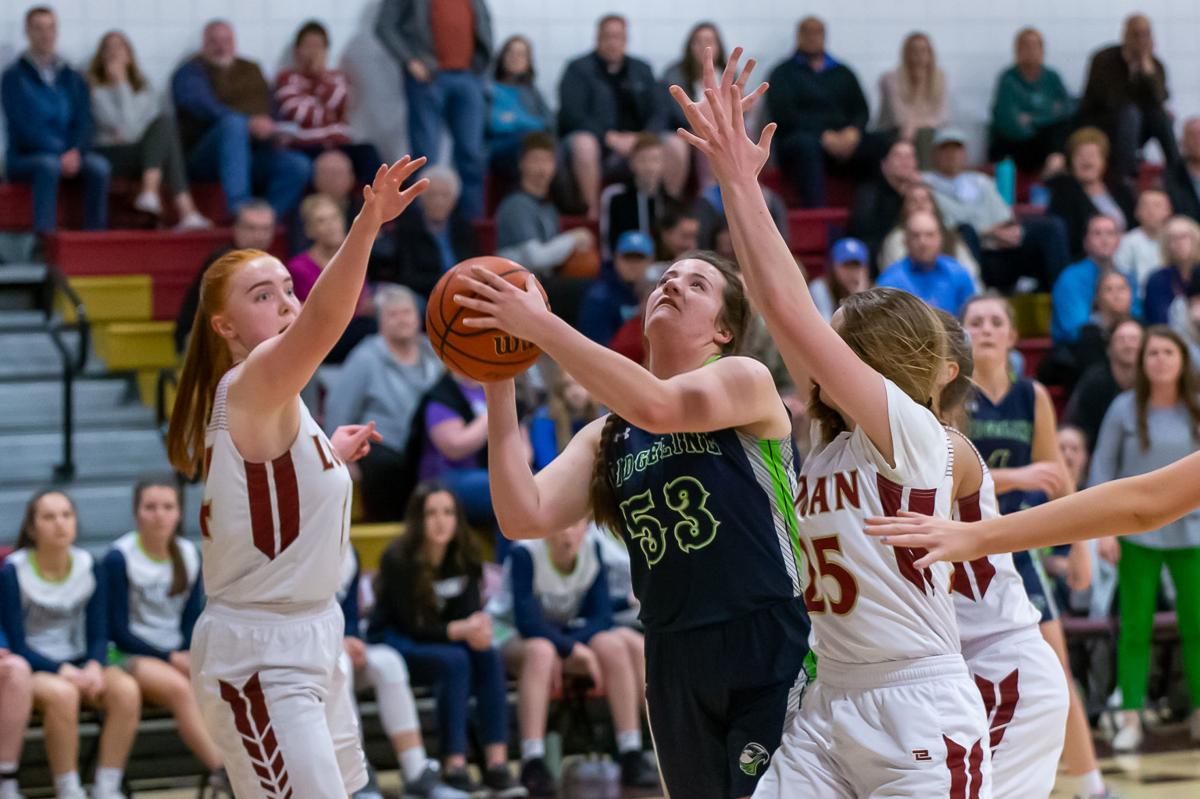 Ridgeline’s Emma Anderson (53) goes up for a shot against Logan’s Emily Thurston (25) and Ginger Anderson (14) Thursday night in Logan. 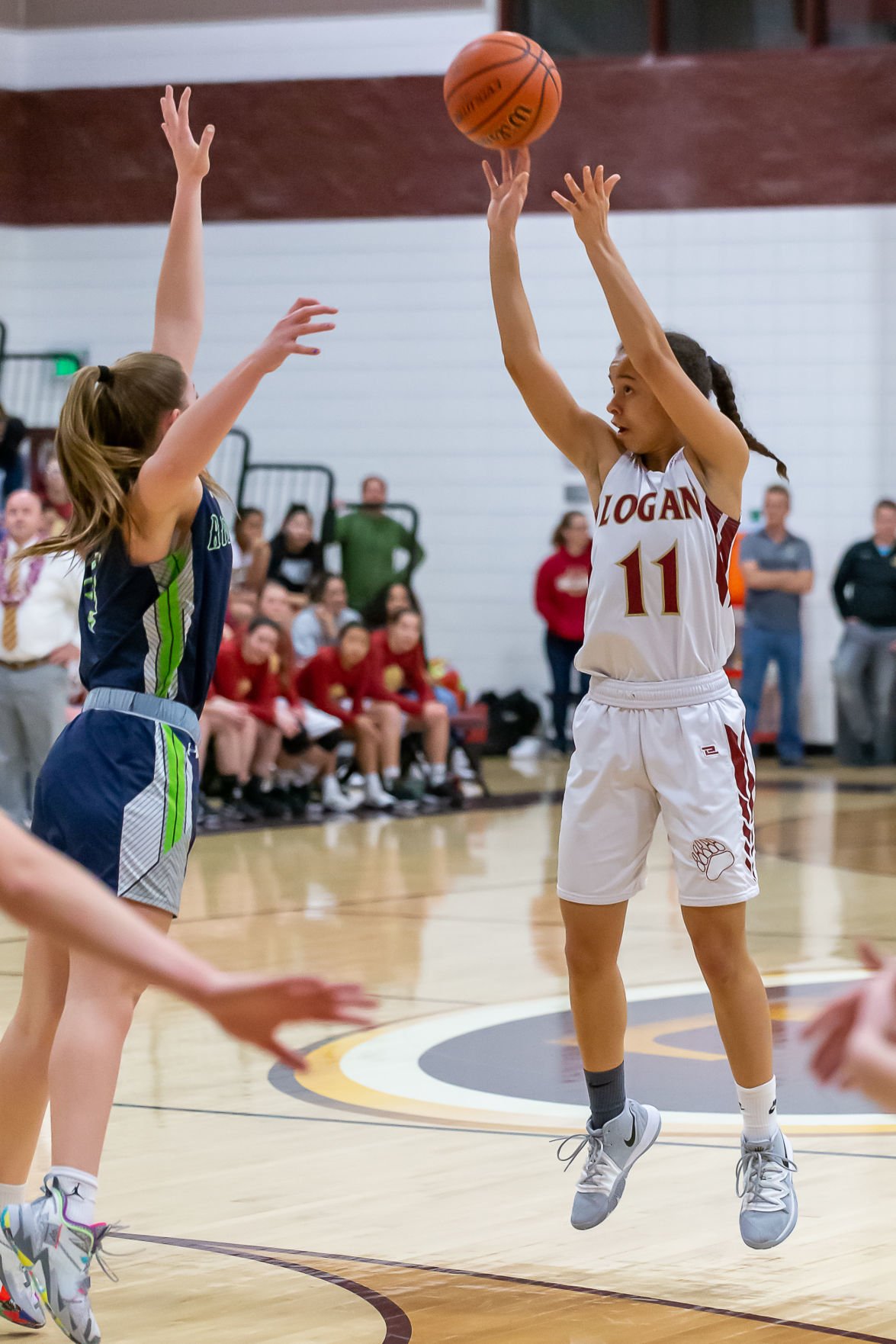 Ridgeline’s Emma Anderson (53) goes up for a shot against Logan’s Emily Thurston (25) and Ginger Anderson (14) Thursday night in Logan.

In a side room outside the Crimson Gym at Logan High School, the visiting Ridgeline Riverhawks hoisted the pewter Region 11 trophy above their heads, having laid claim to its glory for the second year running even before downing the Grizzlies 51-37 Thursday evening.

“It feels awesome, and I wouldn’t want to do it with any other girls,” senior guard Brayli Jenks said. “Our region’s really tough and I’m just proud of us for always working hard.”

“We have an incredible region, we really do,” Ridgeline head coach Ainsli Jenks said. “Each of the teams in our region are going to go do big things at state. I’m excited to see Region 11 really represent. And so to get back-to-back region titles is special. It’s really special.”

Though the game had no bearing on first place in the standings, Ridgeline (17-5, 9-1 Region 11) didn’t relent, holding the lead for the entire 32 minutes. Logan (12-9, 4-6) stuck with them for the better part of the game, however, keeping the score within a few possessions after rallying from a 10-point deficit early in the second quarter to go into the break down 21-17. It required everything the Grizzlies had to stick with the top team in the region and among the best in the state. And it kept Ridgeline on their toes.

“We have to be fully efficient to hang with (Ridgeline), which we were,” Logan head coach Josh Zentner said. “We were doing everything we could to stay within two/four points.”

“I never really took a big deep breath because Logan has athletes that can make plays,” coach Jenks said. “And so we never really felt totally comfortable until the buzzer.”

Logan didn’t give up any room to breath, so the Riverhawks had to create their own. They took the fourth quarter for themselves, doubling up the Grizzlies 16-8 in the final frame. The catalyst for that dominance was a 9-0 run spanning the 7:09 mark of the fourth all the way to 3:26. That produced a 44-32 lead after Logan had cut the advantage to three points.

Key to that run were transition points generated off turnovers. Six of the nine points in that fourth-quarter run came directly off turnovers.

The dominance displayed by the Riverhawks in the fourth rarely comes from one source, and along with the turnovers, production from senior forward/center Emma Anderson kicked the offense into high gear. In the final eight minutes, Anderson went 3 for 3 from the field for seven points, two offensive rebounds (four total boards) and a pair of steals. She ended the game with 21 points, 13 rebounds (seven on offense), four assists and three steals.

Again, though, Ridgeline received significant help from all sources on their team, even if no one came close to the gaudy stats recorded by Anderson. The team moved the ball with graceful fluidity, matching that grace with quality cuts inside and out to open passing lanes. Five of Ridgeline’s seven made field goals in the final quarter were assisted.

“Our goal is that lots of people touch the ball on each possession,” coach Jenks said. “It’s something we’ve really tried to pinpoint. Share the ball and make that extra pass. It was pretty at times when that was happening.”

While the offense took its time, the iron curtain of the Ridgeline defense had to stave off one of the most skilled scorers in all of Utah girls basketball in Amber Kartchner. No small feat for the Riverhawks.

“Amber’s so fast and her first step is unbelievable,” coach Jenks said. “We had to roll in new people, everyone that played on her did a good job, I was really proud of them.”

Though plenty of potential problems presented themselves in regard to guarding Kartchner, coach Jenks had reason to be pleased considering the mere 11 points allowed to Logan’s junior guard. It did come with one caveat as, according to Zentner, Kartchner played all her minutes in the fourth quarter with a sprained ankle which Zentner said contributed to Ridgeline’s run.

“(Kartchner) couldn’t do anything in the fourth quarter,” Zentner said.

In the fourth, Kartchner played seven minutes, taking zero shots, had zero assists, one rebound and a block. She stayed in until Logan waived the white flag with under a minute to play and the Riverhawks up by double-digits. In her stead, Taylor Rose carried the scoring torch, ending the game with a team-leading 14 points.

With the regular season in the books, both teams await the RPI results that will determine playoff seeding. Ridgeline is assured a first-round bye that will allow them to rest until Feb. 22. Zentner said he hopes for the same honor of a first-round bye and it’s likely his team could get that. MaxPreps, who provides the RPI calculation to UHSAA, ranked Logan eighth in 4A prior to Thursday’s game. The top 11 teams skip the first round, advancing to the Feb. 22 second round.

Gracie Rigby hit a free throw with 5.9 seconds left to give Sky View (12-10, 7-3) the win. The Bobcats made plenty of late free throws and plenty of clutch plays according to SV head coach Vanessa Hall.

“We were a little off with our shooting tonight, but we stepped up in other ways,” Hall said. “Our posts rebounded really well. We made some clutch free throws at the end.”

Melanie Hiatt closed off a strong regular season campaign as a freshman with a team-leading 11 points. Macy Hellstern had nine, Kyleigh Traveller had eight and Rigby had seven, rounding out a very balanced offensive attack for the Bobcats.

Mountain Crest’s leading scorers were Havyn Brown with 15 and Kacey Hanks with 10. The Mustangs (6-16, 0-10) once again fell short of their first region win in more than two seasons.

For Sky View, the win capped off a strong late season run that put Sky View in second place in Region 11 behind Ridgeline. The Bobcats have an identical region record as Green Canyon, but are ahead on tiebreaker. That fact has no bearing on the playoffs, and the Wolves will likely have a higher seed than the Bobcats, but Sky View’s rise to the almost-top is worth noting.

Green Canyon head coach Alexis Bird called the win over Bear River the “perfect way to bounce back” from the team’s loss to Sky View that ultimately cost the Wolves (16-5, 7-3) second place in Region 11.

The Falslevs dominated the night, combining for 33 of Green Canyon’s points in the win over Bear River (8-13, 3-7). Shante’ Falslev led all scorers on the Wolves with 20 with Kinley Falslev tallying 13. Kennedy Eskelson added 16 as well.

Green Canyon didn’t hold many large leads, being up only six after the first and seven at halftime, 31-24. But the Wolves controlled the game with a usual dose of solid offense and quality defense.

“The girls played hard and had fun,” Bird said. “It was exciting to see how well they played together and how happy they were for each other’s success.”

Bird said the team is “excited to prepare for state,” where the Wolves will likely receive a first-round bye, allowing for rest until next Saturday.