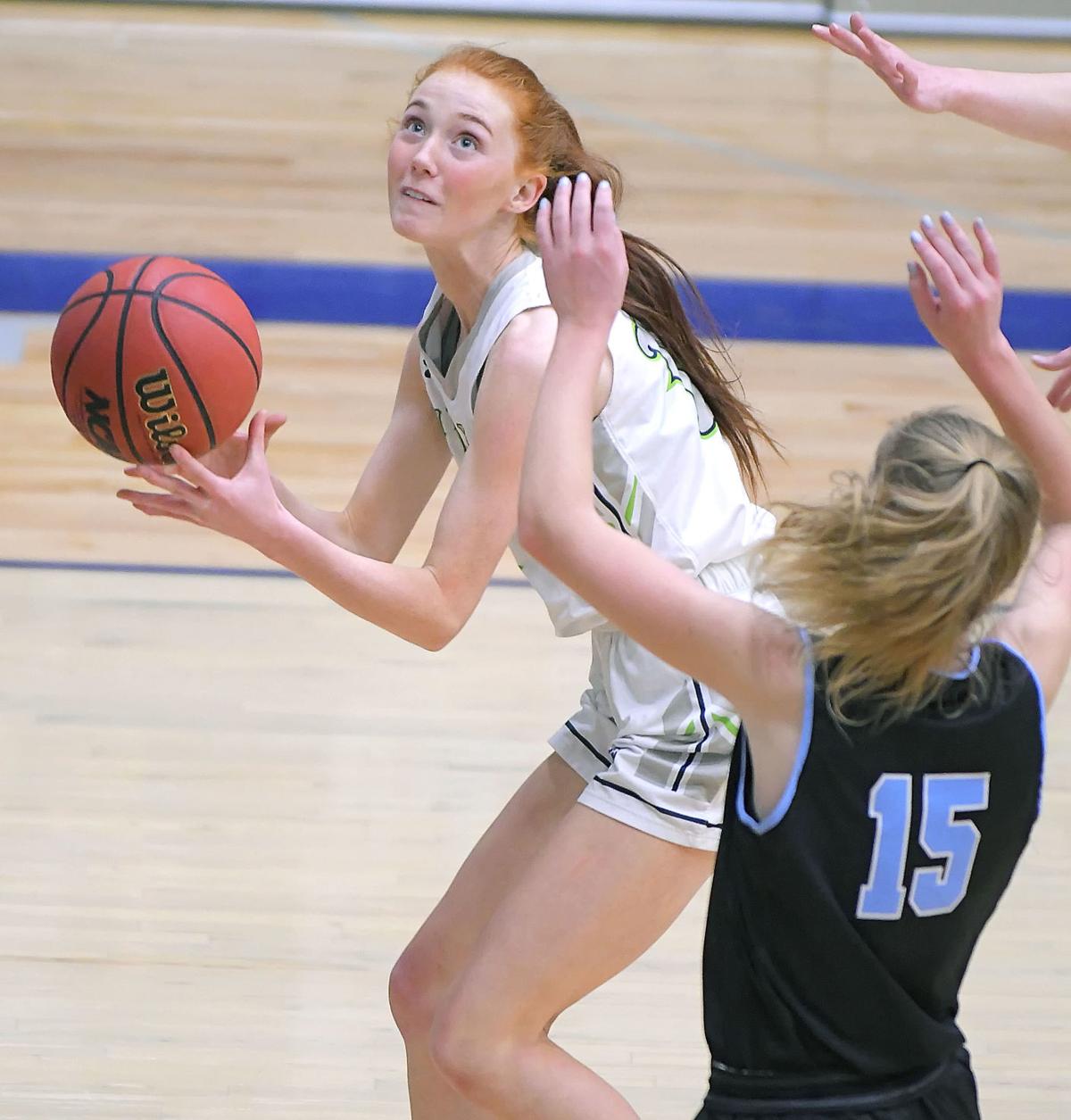 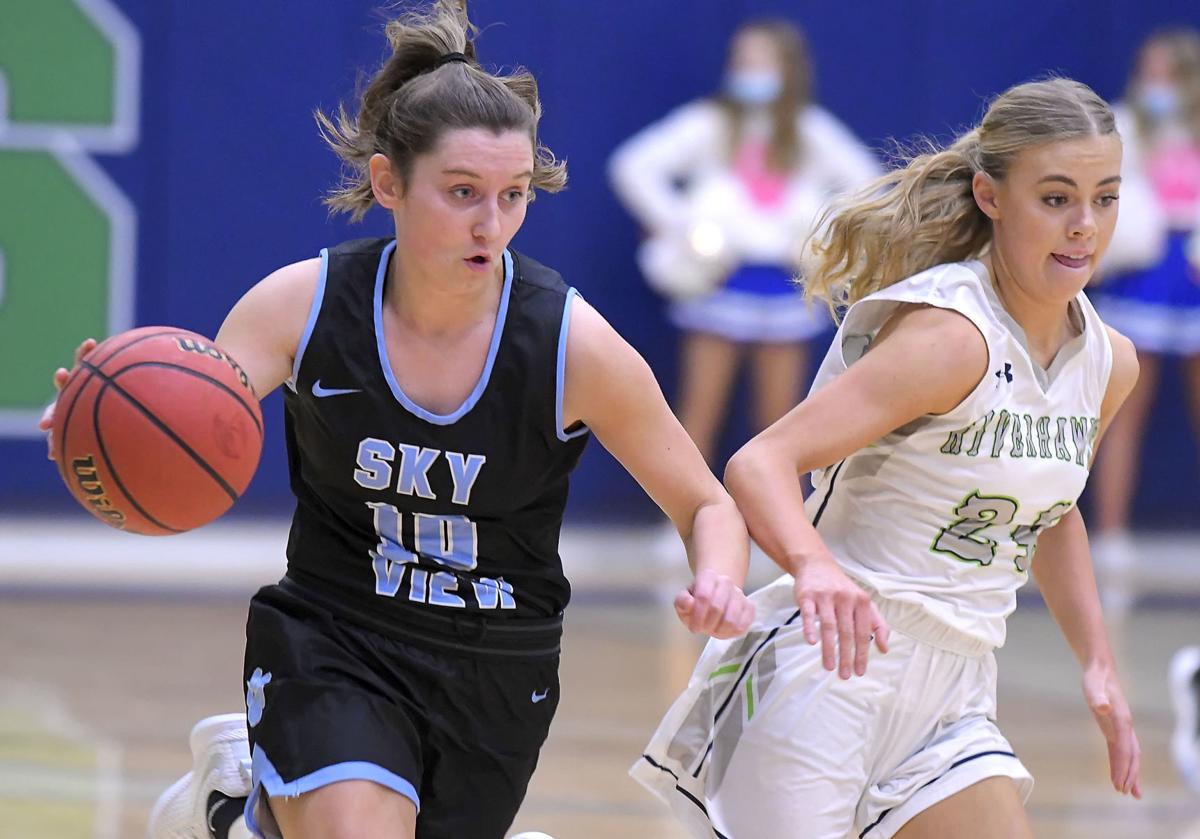 MILLVILLE — A slow start had the Riverhawks in a deep hole early Tuesday night.

But there was plenty of time to play in a girls basketball game that featured a number of momentum swings against visiting Sky View. The Region 11 contest was a one-point game heading to the fourth quarter.

The Riverhawks continued to finish games strong and did so again Tuesday. Ridgeline outscored Sky View by seven points in the fourth quarter and remained undefeated in league play with a 66-60 victory.

“It was a really fun girls basketball game,” Riverhawk head coach Ainsli Jenks said. “It’s one you enjoy watching and one you enjoy coming out on top.”

In other region games Tuesday night, Logan kept pace with the Riverhawks with a 52-38 home win against Green Canyon, and Mountain Crest picked up a road win over Bear River, 63-56.

Sky View (9-4, 1-2 region) dropped its second game in a row after leading in the fourth quarter.

“We knew our region was going to be tough, which is a blessing and a curse,” Bobcat head coach Vanessa Hall said. “It’s nice to face tough competition, but its also hard to face it day in and day out. Each game we are going to learn, get better and get stronger.”

“We are on the track that we want to be on,” said Riverhawk senior Sarah Litchford, who scored nine of her team-best 16 points in the fourth quarter. “Hopefully we can keep winning games and playing hard.”

Macie Brown opened the fourth quarter with a 3-pointer off a pass from Haley Anderson to give Ridgeline the lead 22 seconds into the final period. The hosts wound never trail again.

With the game knotted, Litchford heated up. She scored twice in the paint. Later in the fourth she hit her second 3-pointer of the game. Litchford made two free throws with 14.2 seconds to play to secure the win.

“Our coaches told us to play strong with the ball and be smart,” Litchford said. “We trusted in each other to pull it out. ... It was scary (early in the game), but we do a good job of being positive with each other. We were able to forget about that start.”

Nine different Riverhawks scored in the game with seven of them hitting a 3-pointer. Ridgeline had 11 3-pointers in the game.

“Holly molly they (Riverhawks) hits some threes that were daggers,” Hall said. “I was like how many do you have coach. They just knocked down some threes. I didn’t think we played bad defense, they just hit some big shots. Hopefully when we get them at our place we will be hitting those big shots.”

Joining Litchford in double-digit scoring was Brown (13) and Anderson (10). Elise Livingston came off the bench to score nine points. Litchford and Brown each had eight rebounds, while Litchford dished out four assists and blocked two shots. Six freshmen saw action for the Riverhawks, including Brown and Livingston.

“It’s a good thing to have nine girls score against a tough defensive team,” Jenks said. “I was extremely proud of the bench. I told them to be ready. All of the girls responded well to that. ... We are not too worried about age, even when we did have five freshmen out there when we had a little foul trouble.”

Hellstern led the Bobcats with a game-high 23 points. Melanie Hiatt recorded another double-double with 16 points and 13 rebounds.

“Both of them (Hellstern and Hiatt) stepped up and played extremely well today,” Hall said. “Macy was solid all game.”

The Bobcats scored the first seven points of the game and raced out to a 14-3 lead at the 3:46 mark of the first quarter as four different players scored.

“I felt it was a game of momentum swings,” Hall said. “We got it early, and they batted back.”

After a timeout, the Riverhawks responded with a 14-4 run to get within 18-17. Anderson had seven points during the surge.

“Sky View kind of came out and punched us in the throat and said we are here to play,” Jenks said. “It took a little while for us to get going. I was proud of how the girls responded.”

Hellstern converted a four-point play to end the opening quarter and give Sky View a 22-17 lead. Hellstern had 12 points in the first quarter.

The Bobcats built an eight-point lead early in the second quarter. The Riverhawks reeled off 11 straight points to take their first lead of the game, 31-28. Ridgeline got “dagger” treys from Paige Dahle and Livingston.

“That was awesome,” Litchford said. “We have some really, really good shooters on this team. It was fun to see them come off the bench and hit those big shots.”

After four lead changes, the Riverhawks scored the last five points of the half to take a 38-34 lead into the break. Ridgeline opened the second half with a 3-pointer by Carmen Wimmer for its largest lead of the game.

Sky View used a 6-0 run and scored five straight toward the end of the quarter as Hellstern had six points in the third. The Bobcats took a 51-50 lead into the fourth.

“We have a heck of a region,” Jenks said. “It’s a battle every night. I’m glad to get out of this one with a win.”

Logan scored the first 21 points of the game at home and never looked back.

“We started the game off with a bang, which helped carry us through the game,” Logan head coach Morganne Madsen said. “The girls brought the defensive intensity and set the tone for the game.

The Wolves failed to score in the opening quarter and trailed at halftime, 34-15.

“We obviously started extremely slow,” GC head coach Alexis Bird said. “The first quarter killed us. I’m proud of how we battled the rest of the game. Logan is a great team. We are eager to learn from this and get back to work.”

Amber Kartchner was nearly perfect from the field. The senior finished with a game-best 29 points on 12 of 13 shooting from the field and hit all three of her 3-points attempts. She was 2 of 5 from the foul line. Kartchner also had 10 rebounds. She had 15 of her points in the first quarter.

“Kartchner went off, finishing with a double-double,” Madsen said. “I’m happy with the effort and energy from all of my girls tonight.”

Mountain Crest also had a 21-point first quarter, but didn’t hold Bear River scoreless over the first eight minutes at Garland. The Mustangs (6-8, 1-2) did lead through most of the game.

The Mustangs turned a 21-13 lead after one quarter into a 35-24 advantage at halftime. The Bears (5-9, 0-3) did claw back to within 44-40 heading to the fourth quarter. Mountain Crest put the game away down the stretch.

Bear River was led by Olivia Taylor with a game-high 19 points.

In a battle of two of the top ranked 4A teams in Idaho, No. 3 Preston was able to pick up a nice road win at No. 4 Burley.