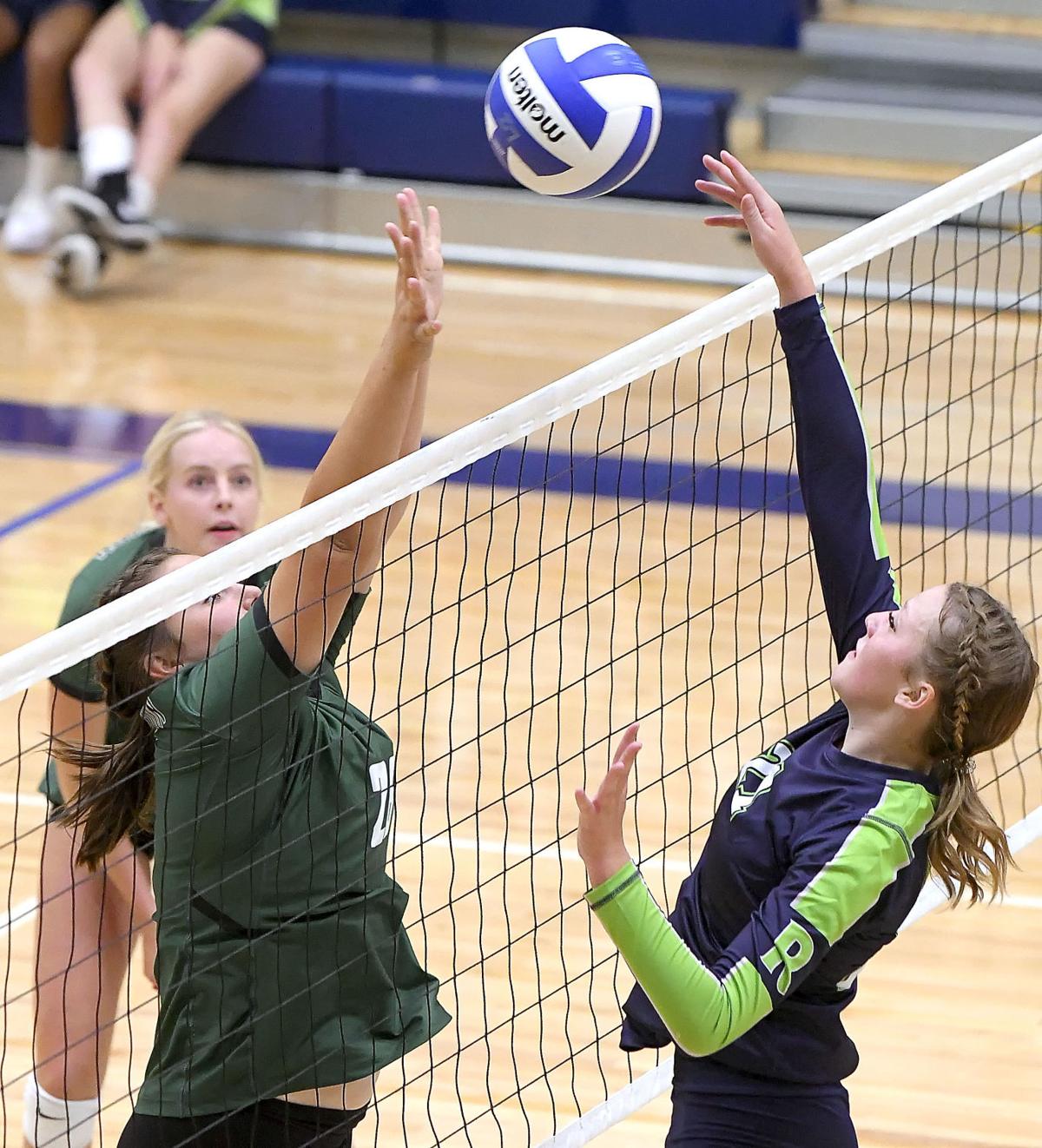 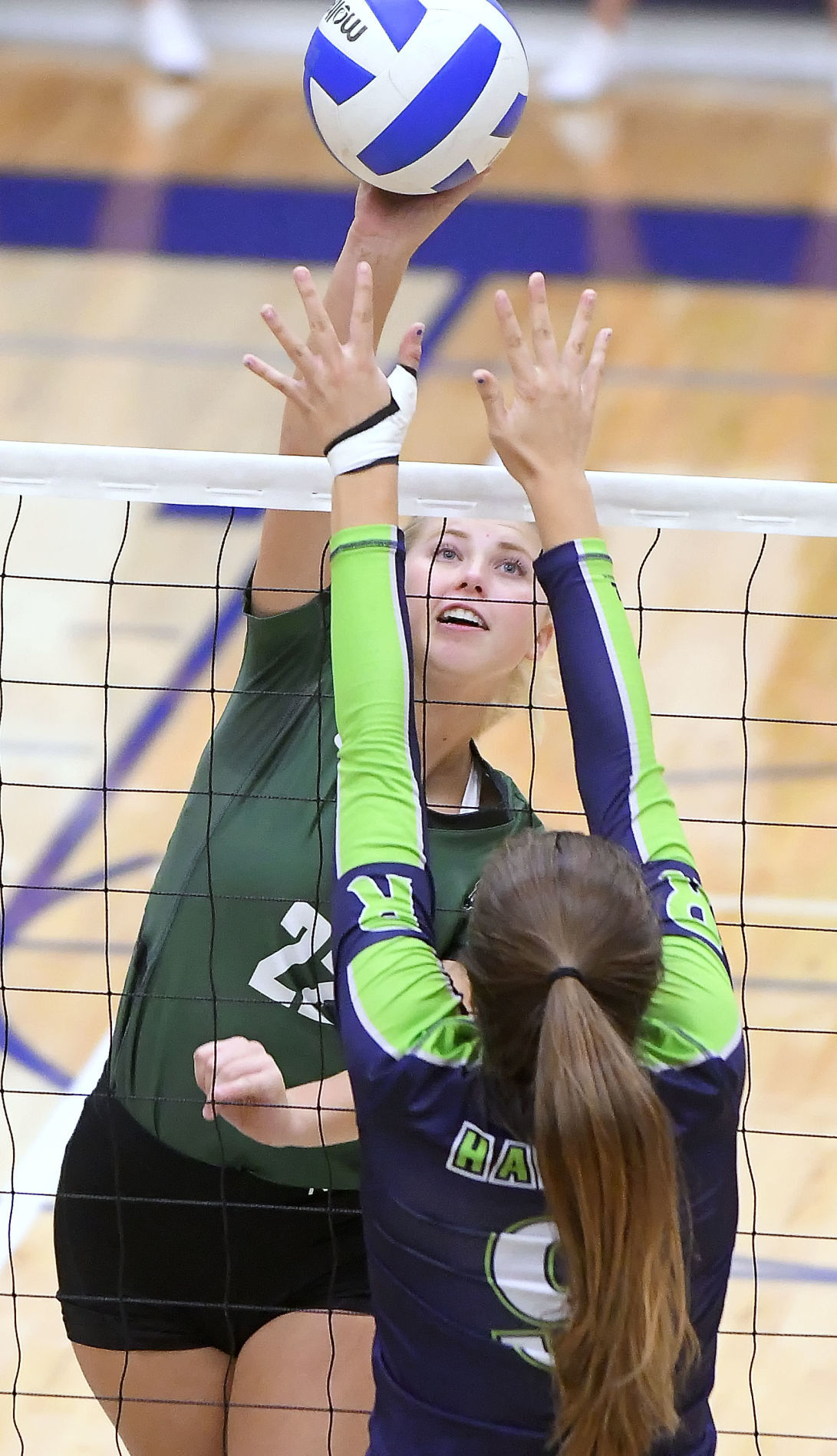 MILLVILLE — It didn’t go five sets, but it certainly felt like it did.

The Region 11 volleyball opener between Ridgeline and Green Canyon was a battle from the opening set Tuesday night. The Riverhawks battled back after dropping the first set to win in four, 26-28, 25-17, 25-17, 25-23.

“We have been working a lot on focusing on our side,” Ridgeline junior Brinlie Crosbie said. “In the first game we had a lot more errors. The next few sets we focused on our earns versus our errors. We did very good on that the last three.”

There were back-and-forth stretches, runs by each team, momentum swings and crazy-long rallies. In the end, the Riverhawks (7-6 overall, 1-0 region) had a few less errors, got their block working and came up with some timely hits.

“The girls did a good job,” Ridgeline head coach Jaicee Roden said. “... We are focusing on progress right now. I thought that tonight we saw some progress in some areas that we haven’t seen, so that was good. We still have some progress to make.”

How wild was it? The first set saw 13 ties and eight lead changes as it went long. The second set was highlighted by an 11-2 run by the Riverhawks. In the third set, the Wolves (5-8, 0-1) saw a five-point lead disappear as the hosts went on a 9-0 run. After trailing by 10 in the fourth, Green Canyon rallied to tie the set at 23-23.

“I was a good start, and I was proud of the fire we came out with,” Wolves head coach Madison Larsen said. “We came in prepared. We’ve been talking about the mental aspect, and I thought you saw that in the fourth set, that mental toughness, that determination to keep fighting. It’s hard when you are down that much.”

The Riverhawks built their big lead in the fourth with timely kills and really got their block going. They had 14 blocks as a team for the match.

“We always have to have a good block up at practice, so that helps us,” said Crosbie, who had six of the blocks. “Everyone was getting up and getting touches. That really helped us on defense for sure.”

The Riverhawks built a 19-9 lead in the fourth. Then the Wolves started chipping away and eventually tied it. In the end, kills by Gracee Putnam and Perrett finished off the match.

“We have been focusing on controlling our controlables and making things non-emotional, sticking to the hard facts, paying attention to the ball more,” Roden said.

The Wolves scored the final three points to take the first set. An ace by Abigail Blau and a kill by Eden Faux finished it off.

“I was proud of the effort overall,” Larsen said. “We need to learn from this and move forward. We just had too many streaks of errors. ... To see them not quit and to keep fighting was super promising and makes me super excited.”

Back-to-back aces by Crosbie, who had five on the night, helped keep the Riverhawks in control in the second set. Ava Wilcox and Perrett ended it with a block.

The deciding run in the third set was powered by a pair of Crosbie kills and a block, while Maylnn Ewer served up one of her three aces in the match.

Ewer led a balanced hitting attack by Ridgeline with seven kills. To go along with her blocks, Crosbie led the team in digs with 22 and had six kills. Putnam finished with 15 digs, while Livvy Davies had 14 digs.

“The girls are working hard and fighting for spots. The thing I love the most is they support each other, whoever is on the court. ... Brinlie was awesome defensively.”

Green Canyon was led by Kaylee Coats with seven aces, seven kills and 16 assists. Olivia Chadwick had a monster night with a match-best 16 kills and 23 digs. Faux added 11 kills. Alivia Longhurst came up with 30 digs and had two digs, while Sarah Blau recorded a double-double with 25 assists and 12 digs.

Green Canyon lost its region opener last year as well to Ridgeline. The Wolves responded by going on a winning streak, sharing the region title with Sky View and then claiming the 4A state title.

“We had a great start to region tonight,” SV head coach Sheila Sorensen said. “We kept our level and energy up the whole match. I was proud of them for doing that.”

Leading the hosts was Melanie Hiatt with seven aces, five kills, passing a 2.80 and coming up with three digs. Haley McUne had four aces, a team-best nine kills while hitting .538, had 10 digs, three assists and passed a perfect 3.0. Jenna Dority served up four aces and had eight digs, while Jenna Gibbons had two aces, six kills and hit .556.

“Bear River played well, and we just didn’t respond well to it,” MC head coach Kindra Anderson said. “We struggled playing together as a team and really let our mistakes get to us. As the game progressed, we did do better and made better connections. I’m happy that we made some adjustments and figured some things out.”

The Indians traveled north to take on host Rigby and Shelley. Preston dropped both in tight matches.

“We focused on starting out strong in the first set and did that,” Preston head coach Karaska Haskell said. “We had strong connections and pushed through. They both were competitive matches and just didn’t end in our favor.”