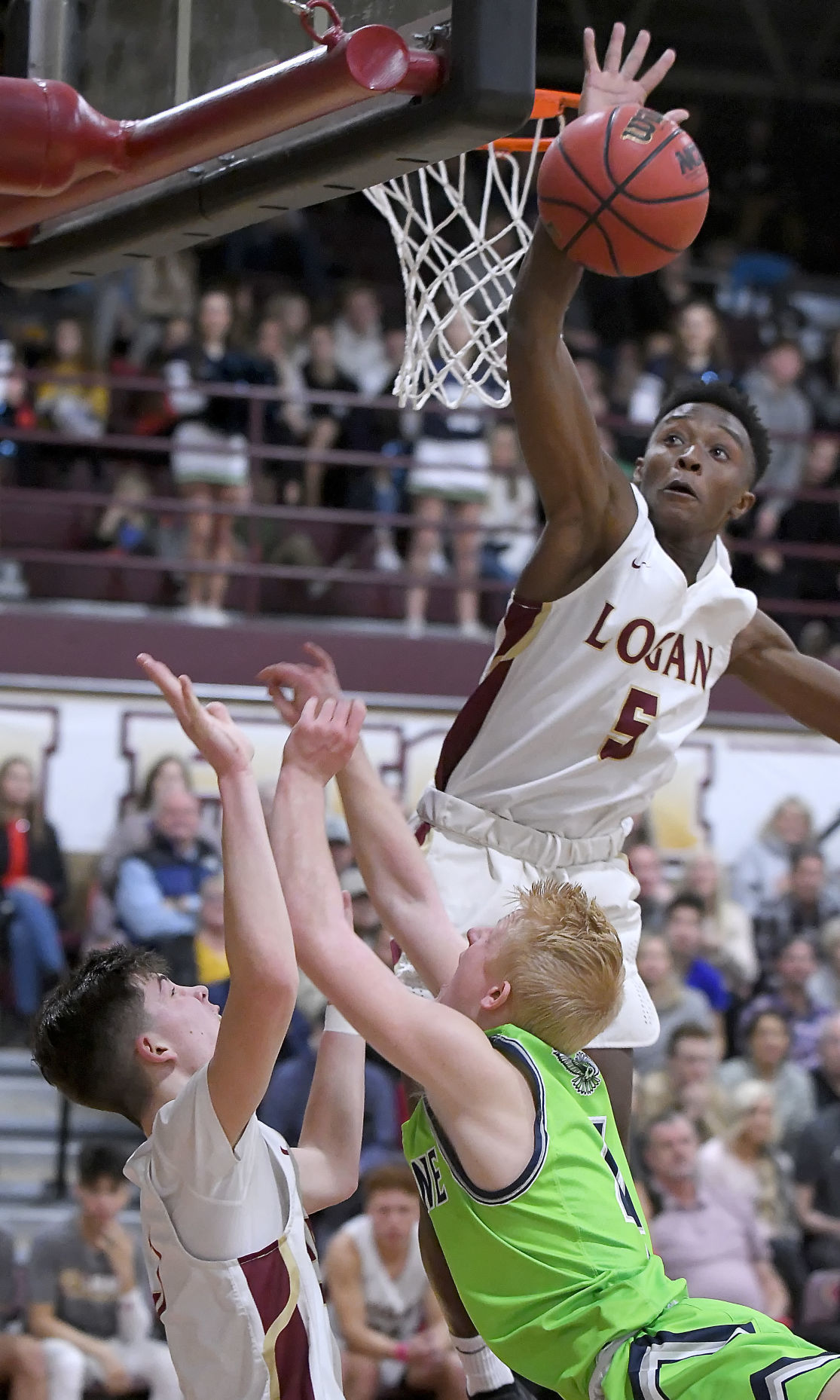 Ridgeline’s Kaden Cox gets his shot blocked by Logan’s Isaac Larsen (5) after he was fouled by Ethan Davis on Friday in Logan. To view more photos from the game, go to hjnews.com. 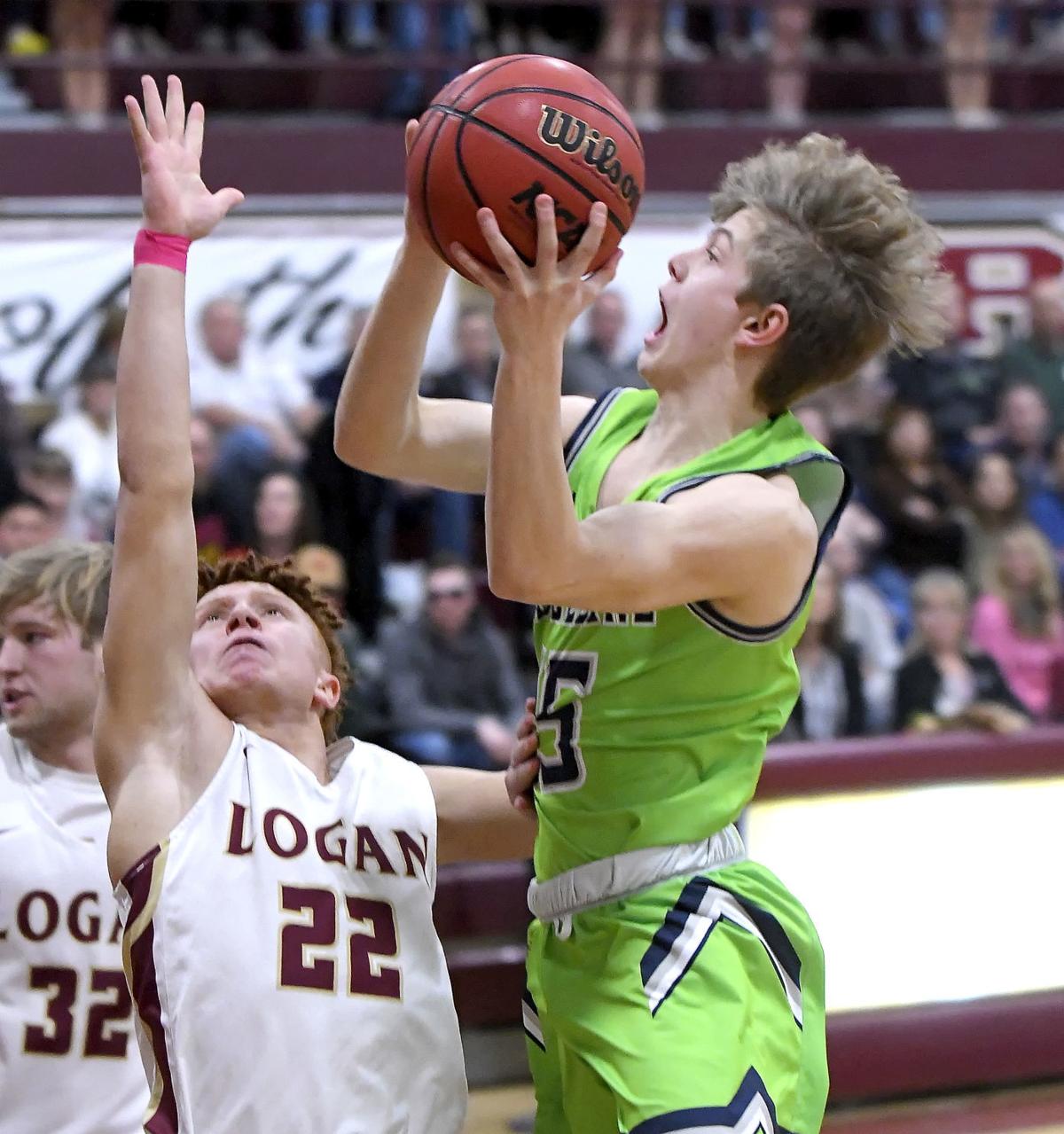 Ridgeline’s Kaden Cox gets his shot blocked by Logan’s Isaac Larsen (5) after he was fouled by Ethan Davis on Friday in Logan. To view more photos from the game, go to hjnews.com.

The Grizzlies did their best to hold off Ridgeline’s boys basketball team from securing a share of the Region 11 title — but on an off-night, no less — the Riverhawks proved why they deserved to be called region champs.

“It feels incredible, it really does,” said Ridgeline head coach Kyle Day after his team held off Logan, 57-51. “Expectations from outside people were a totally different thing, (but) we believed in this group of guys and, to be in this position, 9-1, and sharing region title with Sky View, it couldn’t be any sweeter.”

Sky View was last season’s 4A State tournament champions and came into this season with a lot of — well-deserved, for sure — hype surrounding them. Ridgeline? Not so much.

“Nobody was talking about us at the beginning of the year, and that’s fine, we weren’t looking for all the preseason accolades. Sky View had earned that with what they had done in the past,” Day said. “I wouldn’t say we are the same. We know we can compete with anybody and we like our team.”

All the way through the Grizzlies kept clawing back into the game and forced Ridgeline to play its best basketball to pull ahead, ultimately doing so with under a minute left and leading to the six-point win.

Logan (7-15, 3-7) brought out its press pretty early in the game and it was forcing Ridgeline — which is normally pretty sound in possession — to make mistakes and force the ball a little bit. On the season, Ridgeline shoots 39 percent from deep, but shot just 3 of 11 from beyond the arc in the first half of Friday’s game.

However, threes weren’t the only thing holding Ridgeline back. Logan made it difficult for the Riverhawks to get offense going of any kind.

“This is a tough place to play,” Day said. “Their zone stuff, it just slowed us down enough. We missed a few shots at the rim, we missed a bunch of free throws tonight and stuff that we don’t normally miss. But that was a credit to them I think. They played with a lot of force and a lot of tenacity, especially (Isaac) Larsen down the end. He was just tough to handle.”

Larsen kept his team in the game toward the end, trading baskets with Ridgeline with his powerful drives to the hoop. The outcome was one of two things: Larsen at the free throw line, or two points. He ended the game as the team’s leading scorer with 19 points and, despite previous successful drives to the rim, was called for a charge on Logan’s last possession to seal the game for Ridgeline.

Shooting was a struggle for the Riverhawks. Kaden Cox — who’s normally lethal from 3-point range — was 1 for 5 and scored just 10 points. As a team, Ridgeline was 4 for 17 from deep, so points had to come from somewhere else. And they came from the seniors.

“Our seniors stepped up tonight and were huge,” Day said.

Jacob Salvesen and Jackson Baker took over the scoring load and were crucial to the team’s success late in the game, breaking through Logan’s press and getting points in transition. Salvesen led with 15 points, while Baker had 12 of his own.

Next Tuesday marks the beginning of the 4A playoffs, for which the seedings will be announced tomorrow at noon on the UHSAA website. Ridgeline has surely secured a first-round bye. For Day, he’s excited for whatever comes next.

“We want to bring that tough-nose basketball that we’ve played all year — defense first, share the ball, team basketball,” Day said. “We’ll have a bye on Tuesday and we’ll be ready to go to host one on Friday night.”

Ten different players scored for the Bobcats, who will receive a first-round bye for the 4A State Championships, which begins next week. Mason Falslev led the way with 14 points, Titan Saxton added 12, Evan Hall 10 and Hayden Howell eight.

“Mountain Crest was making shots and we were not aggressive,” SV head coach Kirk Hillyard said. “Defensively, we picked it up in the second half and Titan Saxton came up huge, making four threes and played great defense. I can’t say enough about Mason, Sam (Phipps) and Cameron (Doyle) being seniors and all the time and effort they have put into our program. Mason finishes as the all-time leading scorer in Sky View history. They leave quite a tradition for these guys that remain to live up to. Now on to hopefully making a deep state run.”

Marshall Nethercott and Tanner Bone combined for 22 points for the Mustangs, who will be on the road their playoff opener.

Green Canyon faced an eight-point deficit heading into the second quarter, but rallied to beat Bear River at home and sweep the season series with the Bears. The Wolves outscored the Bears 32-19 after halftime, including 15-6 in the third quarter.

“What a battle tonight,” GC head coach Dan McClure said. “I was so happy with how our guys competed and how hard they played against a very dangerous Bear River team. We had multiple guys step up and make big-time plays late in the game. I really love coaching this group (of players).”

Ren Fonnesbeck netted a game-high 19 points for the Bears, who got 14 points from Logan Litchford, 14 from Mark Huber and 10 from Jace Jacobson.

Preston (20-1, 13-0) struggled from 3-point range and from the free throw line, but still managed to gut out a come-from-behind road win over Pocatello (12-9, 7-7). In the process, the Franklin County Indians extended their winning streak to 16 and finished undefeated against district opponents during the regular season.

Preston tallied 40-31 in the third quarter, but finished the quarter strong as it took a 45-43 lead into the fourth on a pair of Garrett Ward freebies. All-state Preston center Ty Hyde fouled out with about three minutes remaining in the contest and his team down by a point, but the visitors regrouped mentally and pulled out the win.

Luke Smellie paced Preston with 18 points, while Hyde chipped in with 14 and Ward 10. Preston will be the No. 1 seed in the 4A District 4-5 Tournament, which starts next week. Preston will host a quarterfinal game Thursday.

“I thought it was a great road win for us tonight,” PHS head coach Tyler Jones said. “The kids showed a of grit in the second half in a tough atmosphere and found a way to win on the road. Starts all over next week. Everyone is 0-0 and the stakes go up.”