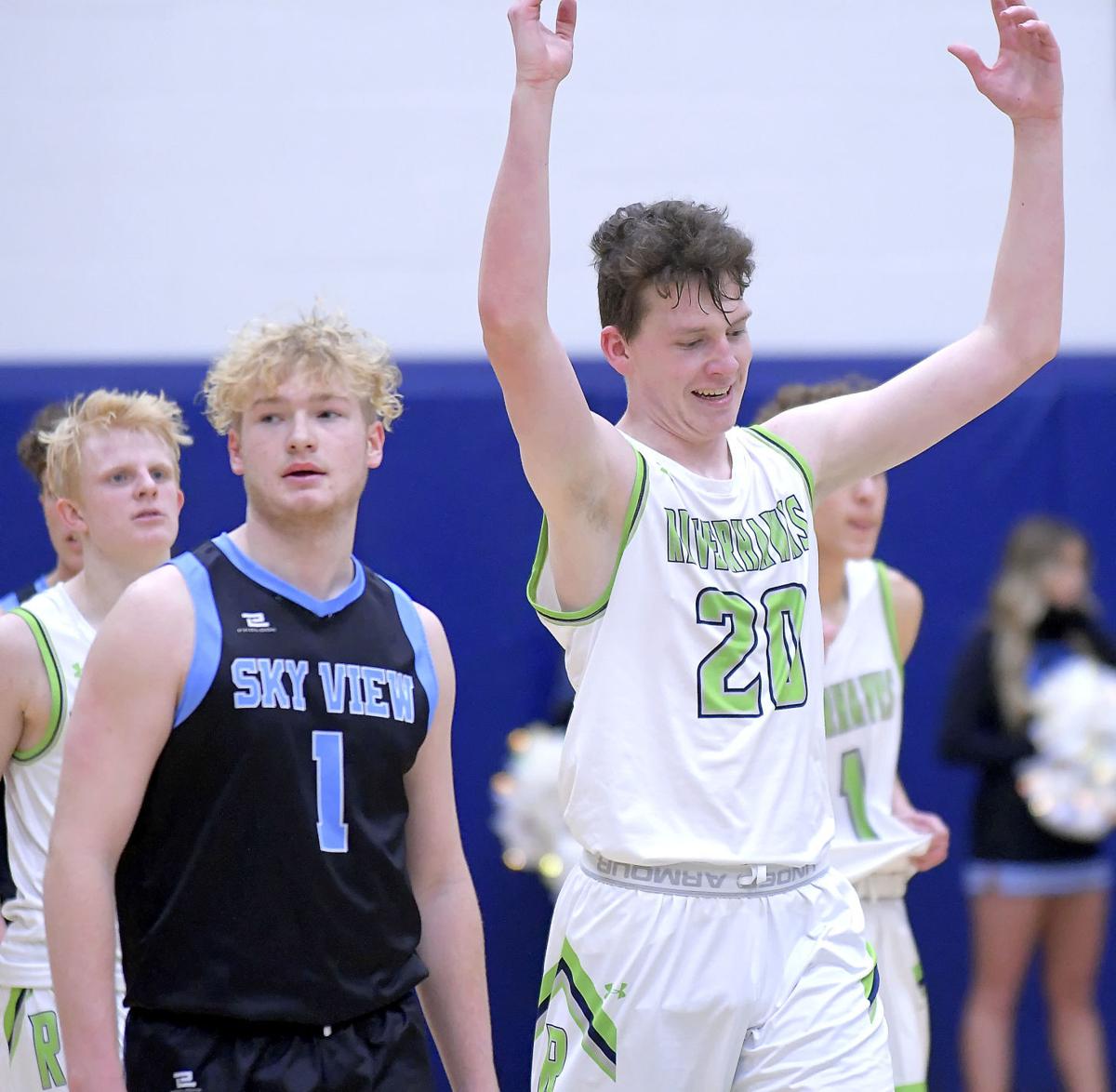 Ridgeline’s Josh Jackman (20) celebrates next to Sky View’s Kason Carlsen in the final seconds of the Riverhawks’ 51-42 victory Friday night in Millville. 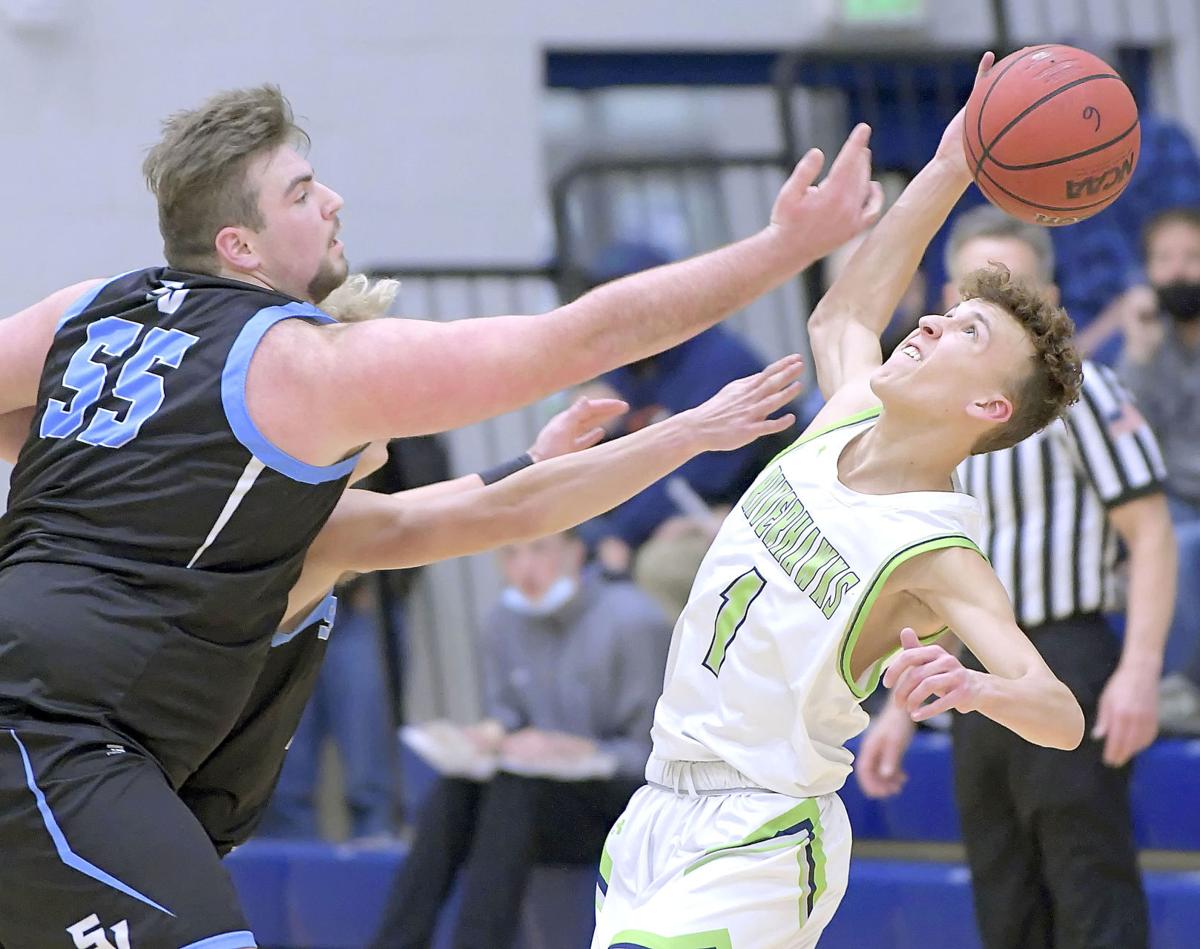 Ridgeline’s Josh Jackman (20) celebrates next to Sky View’s Kason Carlsen in the final seconds of the Riverhawks’ 51-42 victory Friday night in Millville.

MILLVILLE — No overtime was needed this time.

“Immediately after the first game (against Sky View), we were looking forward to this night,” Ridgeline senior Spencer Adams said. “We were hoping to get some revenge. We played great as a team tonight. ... Sky View is a great team. It’s always fun playing them.”

In a defensive battle that was tight throughout despite the hosts outscoring the visitors in every quarter, the Riverhawks (12-8, 7-1 region) made plays when needed and sank all eight free throws they took in the final 40 seconds to secure the victory. The final score was the largest margin in the game as Ridgeline has now won five in a row

“It was intense, but I don’t think you could expect anything different,” Riverhawk head coach Kyle Day said. “Sky View is physical and competes like crazy. We are physical and compete. It was just a battle. I’m proud of our guys who took care of it.”

Sky View (14-4, 7-1) had its eight-game winning streak halted. The Bobcats won the first meeting with the Riverhawks in overtime, 59-57, when Evan Hall had a rebound bucket in the closing seconds. Sky View was not close enough in the final minute to do that this time.

“Tough, hard fought game on both ends,” Bobcat head coach Kirk Hillyard said. “I am proud of how hard our guys fought and played in a close game the entire way. ... It’s one game and you can’t get too down on a loss and too high on a win. Credit to them. They made more plays than us tonight.”

After a pair of free throws by Kaden Cox and Jake Smith, the Riverhawks held a 39-31 lead with 6:43 minutes to play. The Bobcats kept trying to claw back and got within three on two occasions.

Jackson Schumann drained a deep 3-pointer off a pass from Taydem Neal to make it 39-36 with 4:43 to go. After Ridgeline’s Josh Jackman made 18-foot jump shot off a nifty pass from Cox, Neal sank two free throws to pull the visitors within 41-38 with 3:12 to play. Sky View could have got even closer, but missed a shot.

“Josh was awesome tonight,” Adams said. “He is very energetic and when he was hitting shots the whole building got fired up.”

The Riverhawks then scored six straight points for some breathing room. Peyton Knowles grabbed his own miss and put it in. Adams and fellow senior Chase Hall made two free throws each to give the hosts a 47-38 lead with 27.3 seconds left in the game.

“Chase and I as seniors really wanted this,” Adams said. “We have a big week next week, so we need to stay focused. This was a huge win.”

Schumann converted a four-point play, but the Riverhawks made their final four free throws as Cox and Jackman made two each. Ridgeline was 12 of 13 from the free throw line in the fourth quarter.

“Credit them,” Day said of the Bobcats. “Jackson Schumann hit some big shots. The four-point play was tough.”

“Josh Jackman was huge for us,” Day said. “He hit some shots and had to guard Evan Hall all night long, which that is not an easy task.

“... Our seniors have been great leaders for us all year. I’m really proud of them. It’s fun to coach guys like that. They have led by example and that showed tonight.”

“We will bounce back and be ready to finish the season on a high note,” Hillyard said. “I love these kids and how hard they are working to get better every day.”

Points were really hard to come by in the first half as both teams went long stretches without finding the bottom of the net — more than four-and-a-half minutes. The Bobcats did build an early 7-2 lead as Hall had five points.

Cox hit a 3-pointer, and the speedy Adams went coast-to-coast for a layup to tie the game. That was part of a 10-2 stretch for the Riverhawks, who took a 12-11 lead after the first quarter.

“It was really physical out there,” Adams said. “Sky View is a really good defensive team. They are big and tough to get around. That first half was messy and crazy, but luckily we opened some things up in the second half and were able to get it done tonight.”

Penrose gave the Bobcats the lead again at 16-14 off a layup. Ridgeline would score the final four points of the first half and took a 20-18 lead into the break.

“We had some great looks in the first half, but could not get them to fall,” Hillyard said.

The Riverhawks began the third quarter with a 6-1 run as Hall scored a reverse layup, then found Jackman for a layup, and Adams came up with a steal swopped in for a layup on the other end, giving the hosts a 26-19 lead.

Ridgeline took a 35-29 lead into the fourth quarter and made more than enough free throws to pick up the win.

“We have business still to take care of,” Day said. “Region games in Cache Valley are a tussle. You throw the records out.”