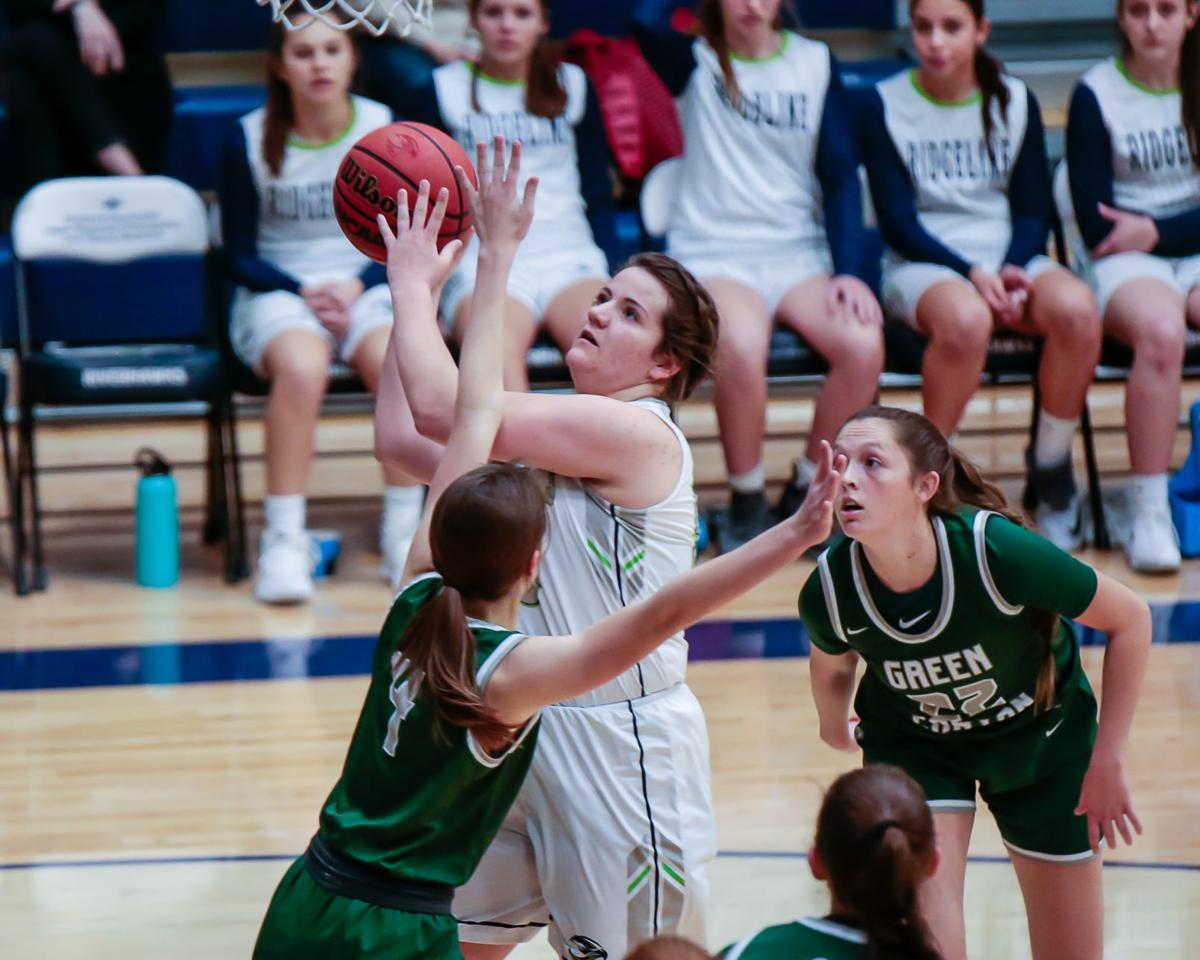 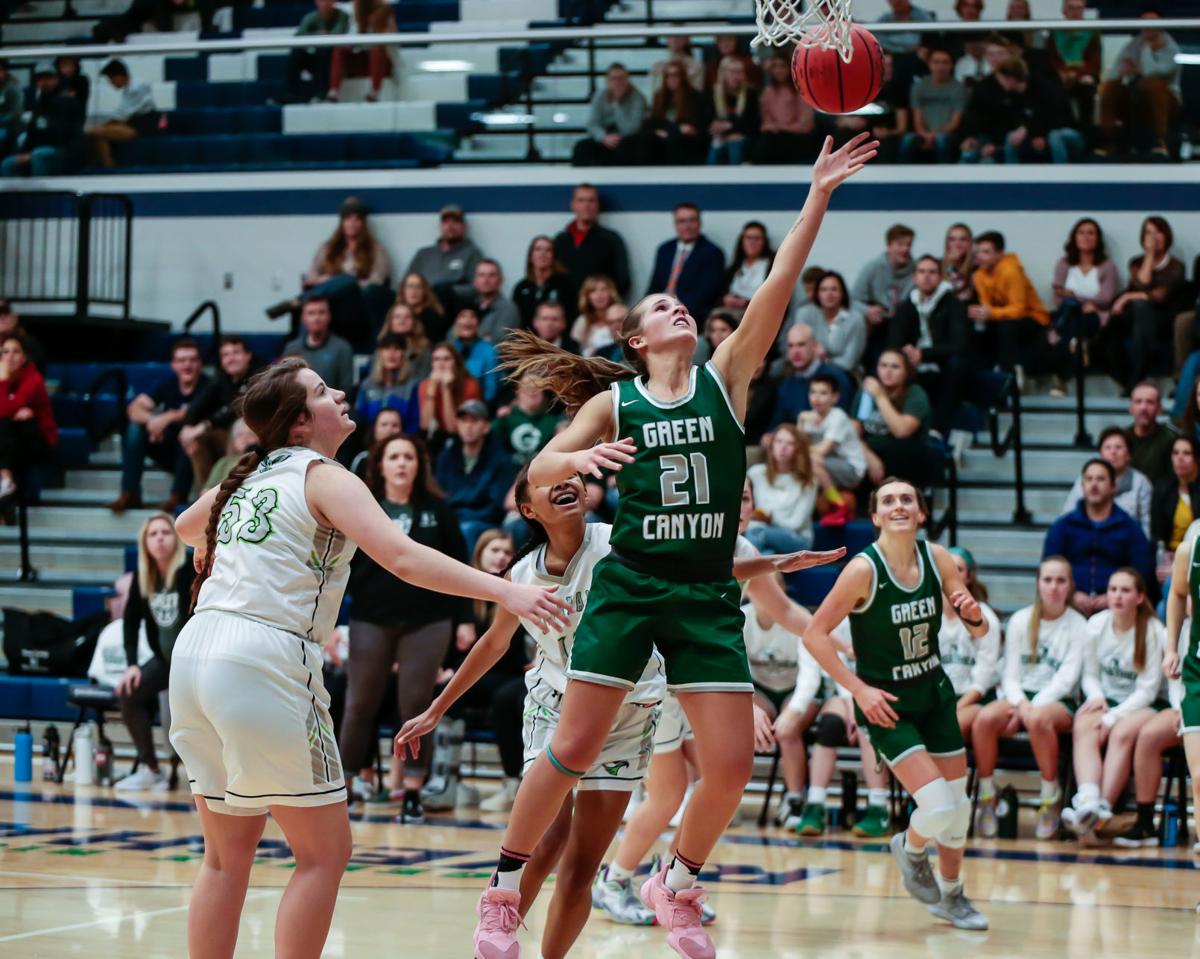 Green Canyon’s Kennedy Eskelson slashes to the basket in a Region 11 girls basketball game against Ridgeline on Thursday night in Millville.

Green Canyon’s Kennedy Eskelson slashes to the basket in a Region 11 girls basketball game against Ridgeline on Thursday night in Millville.

MILLVILLE — The birthday girl, Emma Anderson, led her team in both points and rebounds with 22 and 14, respectively, powering a second-half Ridgeline rally to beat Green Canyon 56-47 in a Region 11 girls basketball game on Thursday night.

Fourteen of Anderson’s points came in the second half as did seven of her rebounds. She made 9 of 13 field goals, by far the most efficient player on her team. However, in the first half, the senior post player wasn’t quite as involved on the offensive end in order to have her normal impact. She had eight points on six shots, and just four rebounds.

“Their defense was really great on me (in the first quarter). I had to really work hard,” Anderson said. “I wasn’t quite as prepared and so once I figured out the game and the fourth quarter came around, I was like, ‘shoot, I want to get this (win),’ so I tried and went harder.”

Green Canyon head coach Alexis Bird noted that it “was one of our game plans, was trying to keep Emma off the boards, especially the offensive putbacks.”

Brayli Jenks broke the run with a pair of 3-pointers. That cut the lead down to three — the Wolves sandwiched a layup in between Jenks’ triples — but Green Canyon still took a five-point lead into the halftime locker room.

Coming out of that locker room, however, the Riverhawks were a much different team. They punched the Wolves straight away with an 8-0 run to flip the game in their favor and earn their first lead since 4-2 in the first quarter, thanks to some key halftime adjustments and a shift in focus.

“We just talked to the girls about looking for open spots,” Ridgeline head coach Ainsli Jenks said, “making the right pass and the right read and, just together, trying to figure out a way to get into Green Canyon’s defense.”

The embodiment of that shift came in the form of Brayli Jenks. Though Anderson finished as the game’s top scorer, with Haley Anderson close behind with 16 well-earned points of her own, Jenks stuffed the box score with eight points, nine assists and eight rebounds for a near triple-double. The assists in particular helped Ridgeline crack open the stingy Wolves defense.

“Brayli is an amazing facilitator. She is just awesome, she’s great at her job,” Anderson said. “She realizes the inside game and she’s very basketball minded, she has a high (basketball) IQ.”

A majority of Jenks’ dimes went Emma Anderson’s way, especially in the fourth quarter. Down the stretch, the Riverhawks kept going back to a play with Anderson fronting her defender in the post and Jenks feeding her the ball. It was a near unstoppable set and Bird said her defenders did about all they could in the circumstances.

“I’m not upset with how they played,” Bird said of her player’s late defense on Anderson. “I can’t discredit what they did. They came in and tried to body her up. She’s just strong, big. Big asset for them. She had a great game.”

Despite some of the shortcomings, the Wolves held their own and gave themselves a great chance to win. With 5:18 left in the game, the Wolves were up 44-42 after weathering a third quarter where they were outscored 16-10. And even after Ridgeline retook a two-possession lead, Kennedy Eskelson — who led Green Canyon with 19 points and 11 rebounds — cut the lead down to two points, 49-47.

On the next possession, the Wolves got a gift in the form of an offensive foul. Unfortunately for them, Kinley Falslev missed the front end of the ensuing one-and-one at the free throw line, and Haley Anderson made GC pay by drilling a 3-pointer 30 seconds later.

With only 1:37 left in the game after Haley’s triple, the Wolves had to play for fouls and though Ridgeline hit enough of them to ice the game anyway, Green Canyon didn’t score in the final 2:24 of the contest.

The Wolves have now dropped back-to-back games, posting their two lowest point totals of the season in those games.

“When you play tough defensive teams, offense is going to be harder,” Bird said. “When you can get going early, you get that confidence more and you make shots. It’s not like we didn’t have shots. We had shots, we just didn’t make them. And give credit to Ridgeline. They had phenomenal defense.”

Ridgeline, meanwhile, has turned its season around after starting the 2019-20 campaign 0-3. The Riverhawks have won nine of their last 10 games.

Sky View (6-7, 1-0) hit seven 3-pointers in its blowout of Bear River (6-7, 0-1), which was held to zero triples. Mikali Hendricks, the night’s leading scorer with 12 points, hit three deep shots herself, with Macy Hellstern adding two, accounting for six of her 11 total points. Abbey Cantwell and Addey Merrill added the other treys.

“It was a great start to region,” SV head coach Vanessa Hall said. “The girls started strong and played tough defense. We were able to knock down shots early in the first half and build a lead heading into halftime.”

The Bobcats held a 30-8 lead at the half, but were outscored 12-7 in the third quarter. But, as Hall put it, Sky View “kept calm and pulled out the win” with steady offense, defense and rebounding.

Both teams started the game off slow with the first quarter ending 5-4 in favor of Logan (9-3, 1-0). The Grizzlies ended up being the only team to kick their offense into gear, spurred on by 22 points from Amber Kartchner and 16 via Taylor Rose. Logan scored 21 in the second quarter to increase its lead to 26-15 by halftime.

Mountain Crest (6-7, 0-1) did eventually get consistent offense, but it took a while to fully arrive. The only quarter the Mustangs held a point advantage was the fourth (15-11).

West Side outscored Firth 38-18 in the middle two quarters en route to a 66-47 drubbing of the Cougars (3-6) at home. In the process, the Pirates (7-2) extended their winning streak to six and have won all of those games by double digits.

Isaac Frankman netted 17 of his game-best 26 points in the first half for the Pirates, who exploded for 25 points in the second quarter. Bryler Shurtliff poured in 19 points, while Ryan Beckstead added nine.

“I thought we played well,” WS head coach Tyler Brown said. “Our defense got better as the game went on. Just have to keep getting better.”