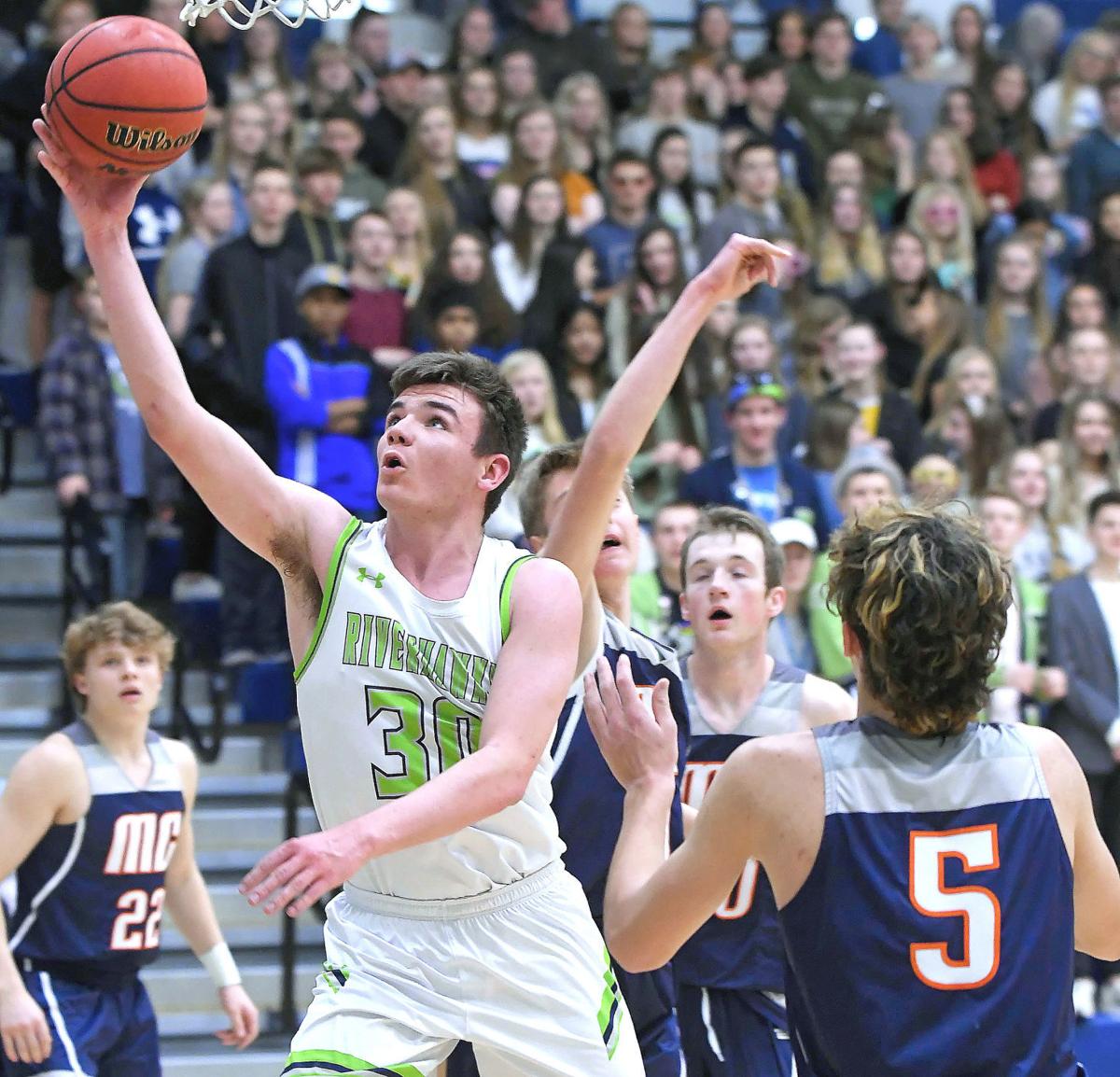 Ridgeline’s Kaleb Smullin (30) takes a shot as Mountain Crest’s Caleb Archibald (5) defends on Wednesday in Millville. To view more photos from the game, go to hjnews.com. 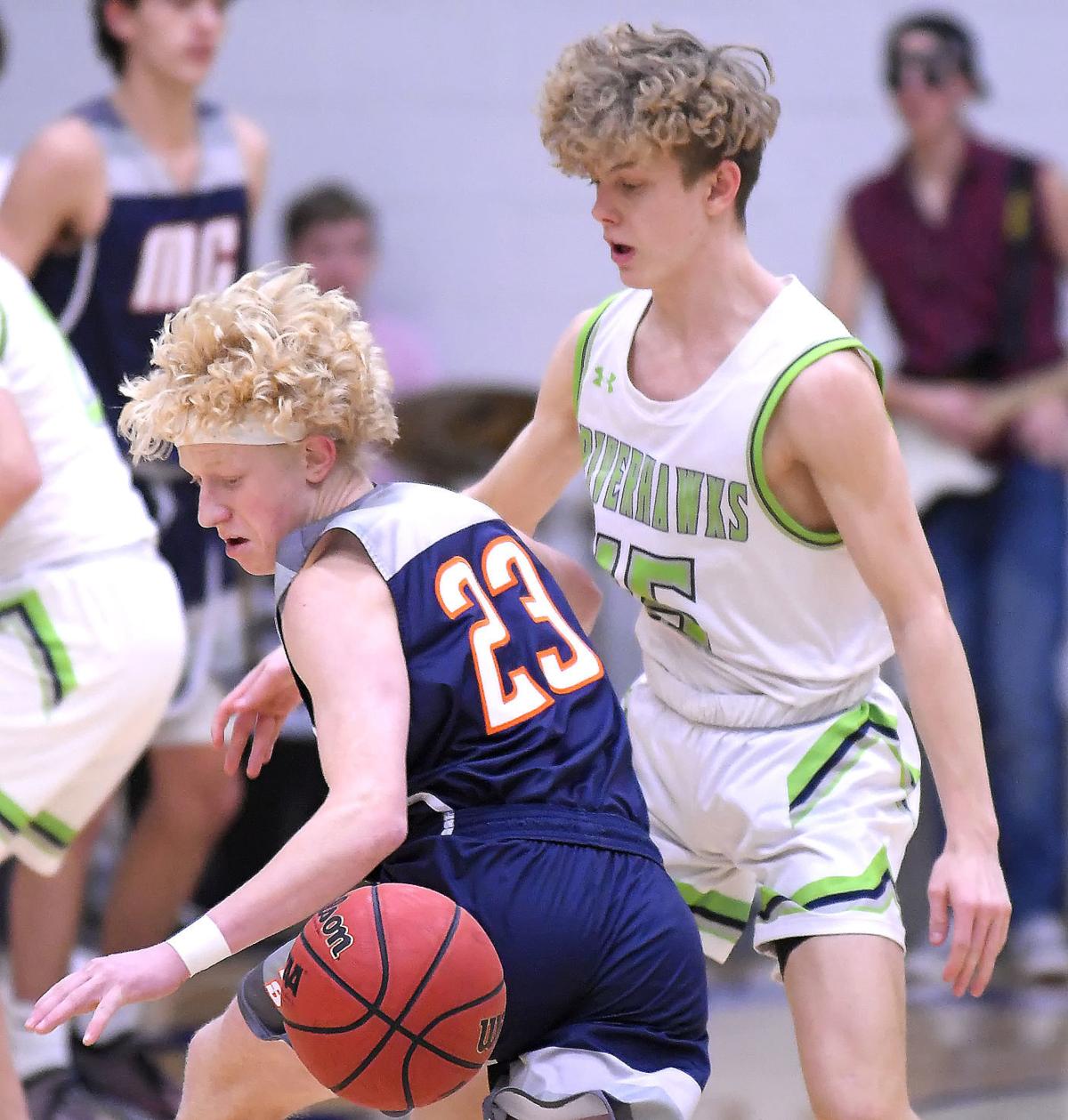 Ridgeline’s Kaleb Smullin (30) takes a shot as Mountain Crest’s Caleb Archibald (5) defends on Wednesday in Millville. To view more photos from the game, go to hjnews.com.

MILLVILLE — It would be easy to walk into a game against a team that is 1-13 and assume that a victory is assured. That’s not what happened on Wednesday night.

Ridgeline did its best to avenge the loss to Sky View last time out — one in which the Riverhawks nearly pulled away with a victory late — with a 68-44 dismantling of Mountain Crest in Region 11 action. The Riverhawks led by as many as 33 at one point, as the chants of “up by 30” rang down from the student section.

“It’s really important, everyone can come and get you in this region. We can’t ever take a night off and we know that,” Ridgeline head coach Kyle Day said. “But it’s a credit to our guys that they came in ready to go tonight and not take anything for granted.”

Defense ignited the Riverhawks (10-6, 3-1 region) on multiple occasions to create points on the other end of the court in the second quarter. Fast break plays like Kyler Hansen’s poke-away on a Mountain Crest player and outlet pass to Peyton Knowles as he sprinted down the court exemplified the amount of intensity Ridgeline showed in that phase of the game. It was not just the second quarter the home team found success stopping Mountain Crest (1-13, 0-4), but that period was especially fruitful as the Riverhawks stretched the lead to 20 points by half, allowing just six to the visiting Mustangs.

The opening period did set the tempo, however, for the way Ridgeline was going to attack the game. It was just different characters filling the lead role across the four quarters.

In the first eight minutes, guard Kaden Cox erupted for 11 points and did so on very efficient shooting. The sophomore missed just one shot out of four and made two 3-pointers from NBA distance. Cox led both teams with 21 points on the night, but was fairly quiet in the second quarter, allowing other players to step up and make shots.

“We talk a lot about ‘let the ball find the best shot,’” Day said. “They do a great job of it, nobody is super worried about who’s getting the accolades. We talked about it at halftime, because some guys can go out here and say ‘it’s a 20-point game, I’m going to get 30 tonight,’ but Kaden (Cox) didn’t do that, he let the game come to him.”

Ridgeline played fluidly by switching the ball around the perimeter, occasionally finding a player in the post, before a quick pass back outside. This strategy led to more than a handful of high-quality shots, and the team converted at 55 percent on 18 attempts from deep, all while shooting 52 percent from inside and 12 15 from the foul line. Mountain Crest just never troubled them enough to disrupt the rhythm that was so effective for Riverhawks.

“Him (Cox) and Kyler (Hansen) both have range and that helps us out. It makes it hard for people to zone us, changes the way they have to guard us,” Day said. “So, really being able to step it back and shoot the ball at that level opens up tons for other people.”

Before the draught, Mountain Crest was within six points at the end of the first quarter, with senior forward Marshall Nethercott handling most of that responsibility. Nethercott led his team with 15 points on the night, but found trouble as the game progressed with Knowles controlling the paint as well as he did. Ironically, as hesitant as Mountain Crest was to attack the paint, it shot 70.5 percent down low on 17 attempts. Compare that to 3 of 17 shooting from beyond the arc, and it gives a little more clarity to why the Mustangs were down by as much as they were.

This season, Knowles has been one of those players that doesn’t necessarily jump out at you initially, but with enough time, it’s abundantly clear how vital he is to the team’s performance in all phases of the game.

“Tonight he’s guarding Marshall (Nethercott) and he’s a two or three-year starter,” Day said. “He’s a great player and he made some tough shots early on in the game. But Peyton (Knowles) sticks with it, he really works his butt off and like we’ve said before, he covers up for other things and we really like what he’s doing.”

Next up for Ridgeline is another Region 11 clash, this time with Logan on the road in the Grizzly Den.

Sky View (13-2, 4-0) seized the momentum by outscoring host Green Canyon (8-8, 1-3) 22-10 in the second quarter. In the process, the Bobcats got a measure of revenge against the Wolves, who outlasted the Bobcats in a pair of nailbiters last year.

“Kids played well,” SV head coach Kirk Hillyard said. “Just another game with a great high school atmosphere, which is kind of a tradition with Sky View and Green Canyon games the last few years. Always room to improve, but we had some great defensive stops at big moments. Not a lot of time to celebrate. Back at it tomorrow to prepare for MC.”

Mason Falslev poured in a game-high 26 points for the Bobcats, who extended their winning streak to eight. Sam Phipps netted 18 points, while Taydem Neal drained some big 3-pointers and contributed with 13 points.

Cole DeBoard buried four treys and scored a team-best 17 points against his former team to lead the Wolves. Carter Maughan and McKay Yorgason combined for 30 points for Green Canyon.

“Really proud of my guys tonight,” GC head coach Dan McClure said. “Loved how they battled. Sky View is so hard to guard. Their size and athleticism gave us fits, but I love how we competed.”

Bear River outscored Logan 39-30 in the second half to leave Cache Valley with its second straight hard-fought victory. The Grizzlies (6-10, 2-2) limited standout guard Mark Huber to 15 points, but Ren Fonnesbeck exploded for 38 to lead the Bears (11-5, 2-2).

It was another good offensive performance for Logan’s one-two punch of Jadin Penigar and Isaac Larsen. Penigar led the Grizzlies with 24 points, while Larsen added 19. Isaac Tuft scored all nine of his points on 3-balls for the hosts.

West Side used another dominant defensive performance to extend its winning streak to 10. The Pirates limited host Aberdeen to five points in the second half. It’s the second time in three district games West Side hasn’t allowed 30 points.

The Pirates (11-2, 3-0) outscored the Tigers (3-11, 0-2) by a whopping 19-1 margin in the third quarter to take complete control after only leading by six points, 25-19, at the half. Isaac Frankman and Connor Nielsen finished with 11 points apiece for West Side, Ryan Beckstead chipped in with 10 points, and Bryler Shurtliff and Blaize Brown combined for 17.

“We picked it up in the second half and played a little better,” coach Brown said.

West Side welcomed Soda Springs and Grace to Dayton for a pair of duals on Thursday night. The Pirates were outpointed by the Cardinals, 57-30, and the Grizzlies, 60-24.

West Side 98-pounder Jed Hurren dispatched of both of his opponents by fall in the first round. The Pirates got a first-round pin from heavyweight Connor Robinson against Grace, and a opening-round pin by Owen Cope (182 pounds) against Soda Springs.

The Pirates forfeited three matches against the Cardinals and two against the Grizzlies. West Side also won a combined five bouts by forfeit during the evening.