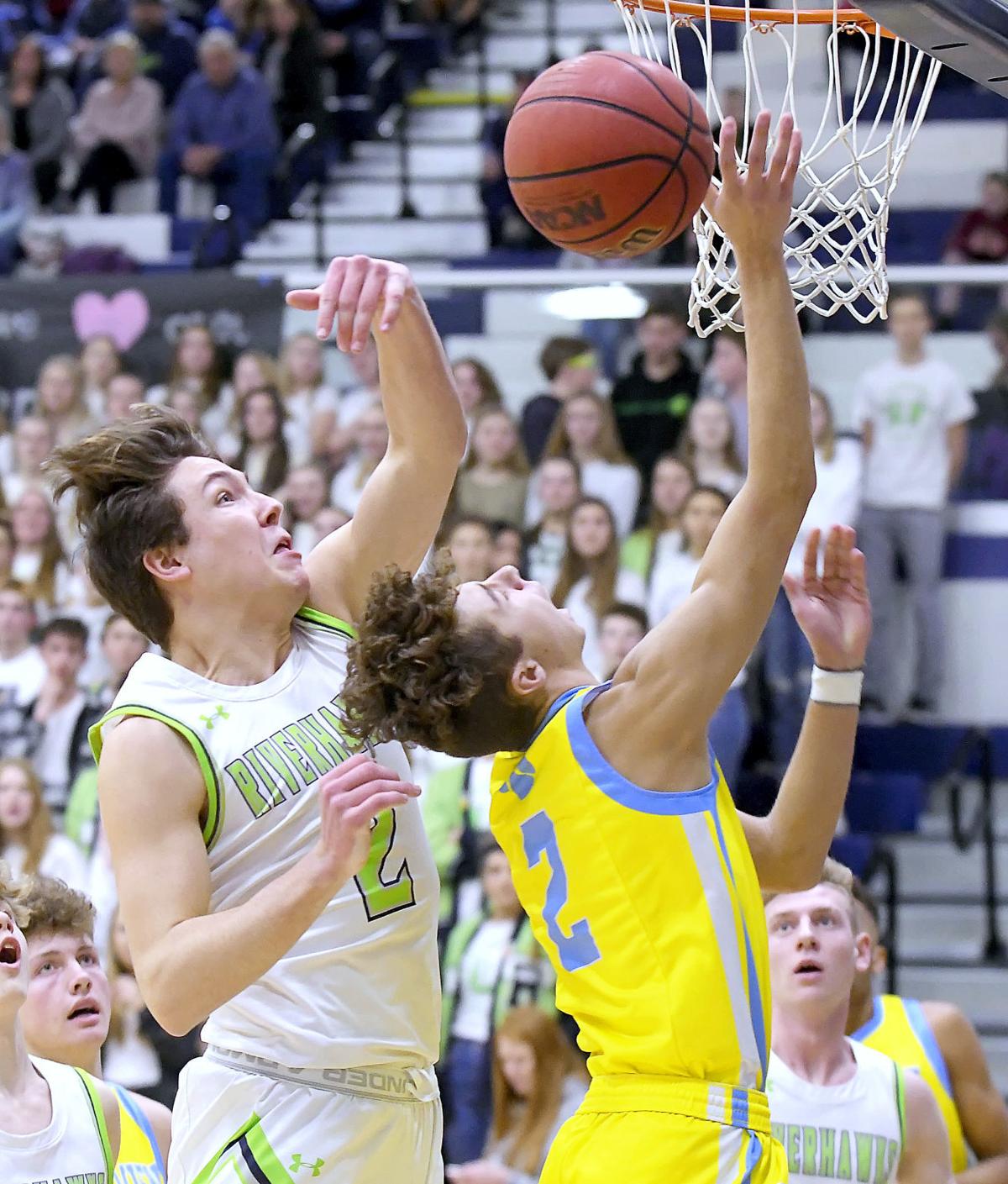 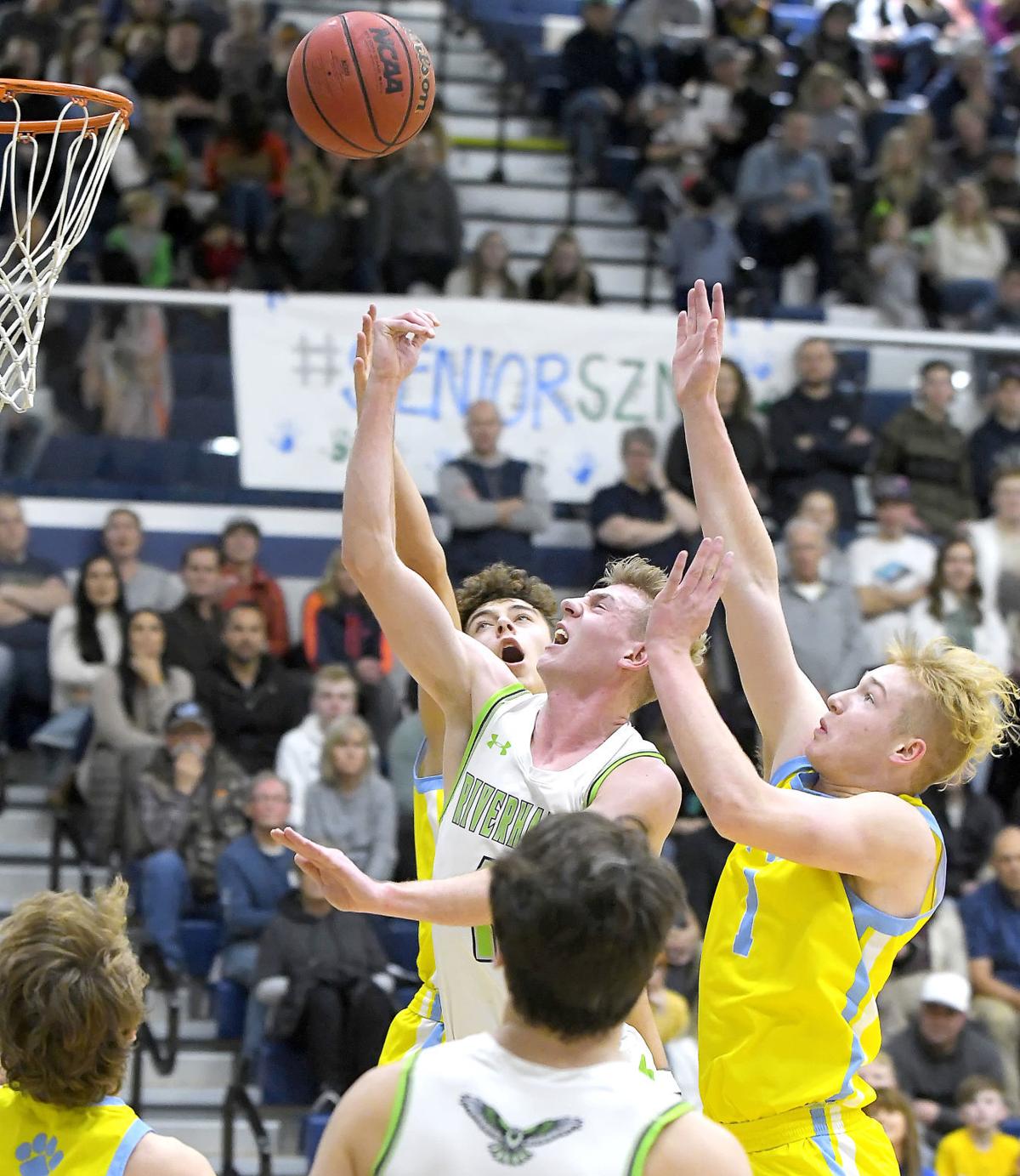 Ridgeline boys basketball team ended top-dawg Sky View’s 11-game winning streak and gained a share of the top spot in the region with a 66-56 win.

“This is just huge. They’re such a good basketball team and we know that, but we know we are good too,” Ridgeline head coach Kyle Day said. “They got us early at their place, but we fought back and we got a belief in that moment and then tonight we were prepared, the boys were focused. It’s a hell of a way to have a Senior Night.”

In the process, the Riverhawks corrected their loss to Sky View by tightening up some of the things that got away from them in the first of that game three weeks ago.

The game hinged completely on the third quarter, a period in which Ridgeline reversed an eight-point halftime deficit and allowed Sky View to score just five points — ultimately ending the frame with a 45-40 lead and heaps of momentum on their side.

“It helped a little bit that some of their guys were off a little bit. Mason (Falslev) didn’t make as many shots as he’s normally gonna hit, we know that,” Day said. “But I think we can credit Jackson Baker with his job defensively, and then Peyton (Knowles) did an awesome job on Sam Phipps. And then everyone else just kept doing their job and was assignment-sound.”

In the first half, Sky View wasn’t earning any basket easily, and Ridgeline was able to implement its style of basketball on the offensive end. Baker converted on a floater and brought the game within two points (28-26) with 2:30 left in the first half.

Ridgeline had traded baskets for most of the quarter, with Kaden Cox making four 3-point shots in the half. However, Sky View found a way to pull ahead slightly by going on a 7-1 run to close out the second quarter.

Falslev pulled off a couple spin moves to get the Bobcats rolling, and fellow senior Phipps fought through contact at the rim to convert on a bucket right before half.

While the Bobcats shot 60 percent from deep in the first half, they didn’t rely on that very often, attempting just five shots. Instead, they found space on the inside, but did so in a very meticulous manner.

Phipps missed his first four shots at the rim and Falslev missed his first two threes, but eventually Sky View found a way through Ridgeline by slowing things down in the half court and relying on Falslev’s athleticism and playmaking abilities. But nothing came easy, and that hurt them in the long run — a key to Ridgeline’s success.

“It’s huge, right? We know that with a team that is this good, you can’t let them get easy stuff,” Day said. “They get out in transition and get easy stuff, that’s going to make your night a really long night.”

Cox led Ridgeline with 25 points on the night and was lethal from deep, making 7 of 9 3-point attempts. According to Day, he was “dialed in”, which can be dangerous when someone has the capabilities and confidence to pull up from 25 feet in any situation. And that’s what he did, along with teammate Chase Hall.

Sky View kept fighting as the game progressed into the later stages, when Ridgeline pushed its lead to as high as 10. Falslev made his only three of the game to shorten the lead to five, and with as quick as they can get buckets, it certainly wasn’t out of the realm of possibilities that Sky View could have pulled off the comeback with close to two minutes left.

But Ridgeline was just as poised, even more so than the Bobcats on this particular night. The Riverhawks continued to make it tough on Sky View to convert and kept coming up clutch on the offensive end. Once Ridgeline realized what it was capable of on the night — and gave itself more and more breathing room — it never looked back. Although young, this Ridgeline team seems to possess an ability to make the right shots at the right time.

Both teams are now 7-1 in Region 11 with just three games left before playoff basketball begins.

Green Canyon outscored Logan 20-11 in the fourth quarter to pull away and avenge a loss to the Grizzlies last month at home.

McKay Yorgason scored 10 of his game-high 20 points in the third quarter for the Wolves (11-9, 4-4). Cole DeBoard added 11 points for Green Canyon, and Carter Maughan eight.

“So proud of how we responded in such a tough, physical game,” GC head coach Dan McClure said. “My guys battled tonight. We were outstanding on the defensive end. Offensively, we made just enough plays. Really happy for the guys.”

“We missed out on a big opportunity tonight, especially for as great as our student section was for packing the place and making it a fun environment,” LHS head coach Logan Brown said. “I felt like our efort was there, but our overall execution could be better and that’s on me as a coach. We have a good group of kids that will respond in a position way.”

Bear River outscored Mountain Crest 30-8 in the second quarter to take a commanding 45-20 lead en route to sweeping the season series between the two teams.

Tanner Bone finished with a team-best 14 points for the Mustangs (1-18, 0-8), who got 11 points from Caleb Archibald, 10 from Connor Willie and nine from Mason Baldwin. Mountain Crest, which outscored Bear River 25-13 in the third quarter, knocked down 12 3-balls.