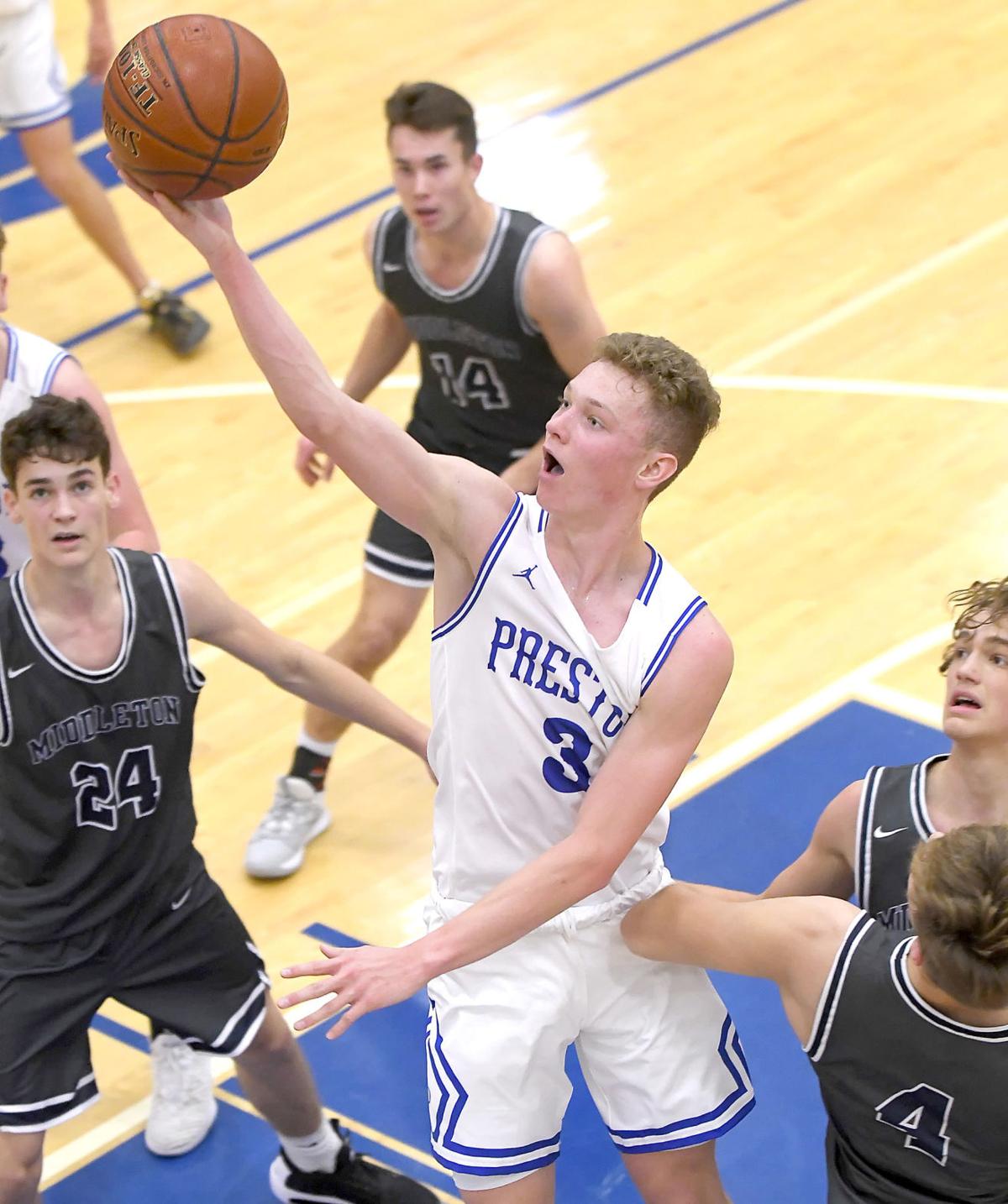 Preston’s Luke Smellie (3) takes a shot as Middleton’s Jordan Hymas (24) and Cash Cowdery (4) defend on Friday in Preston. To view more photos from the game, go to hjnews.com. 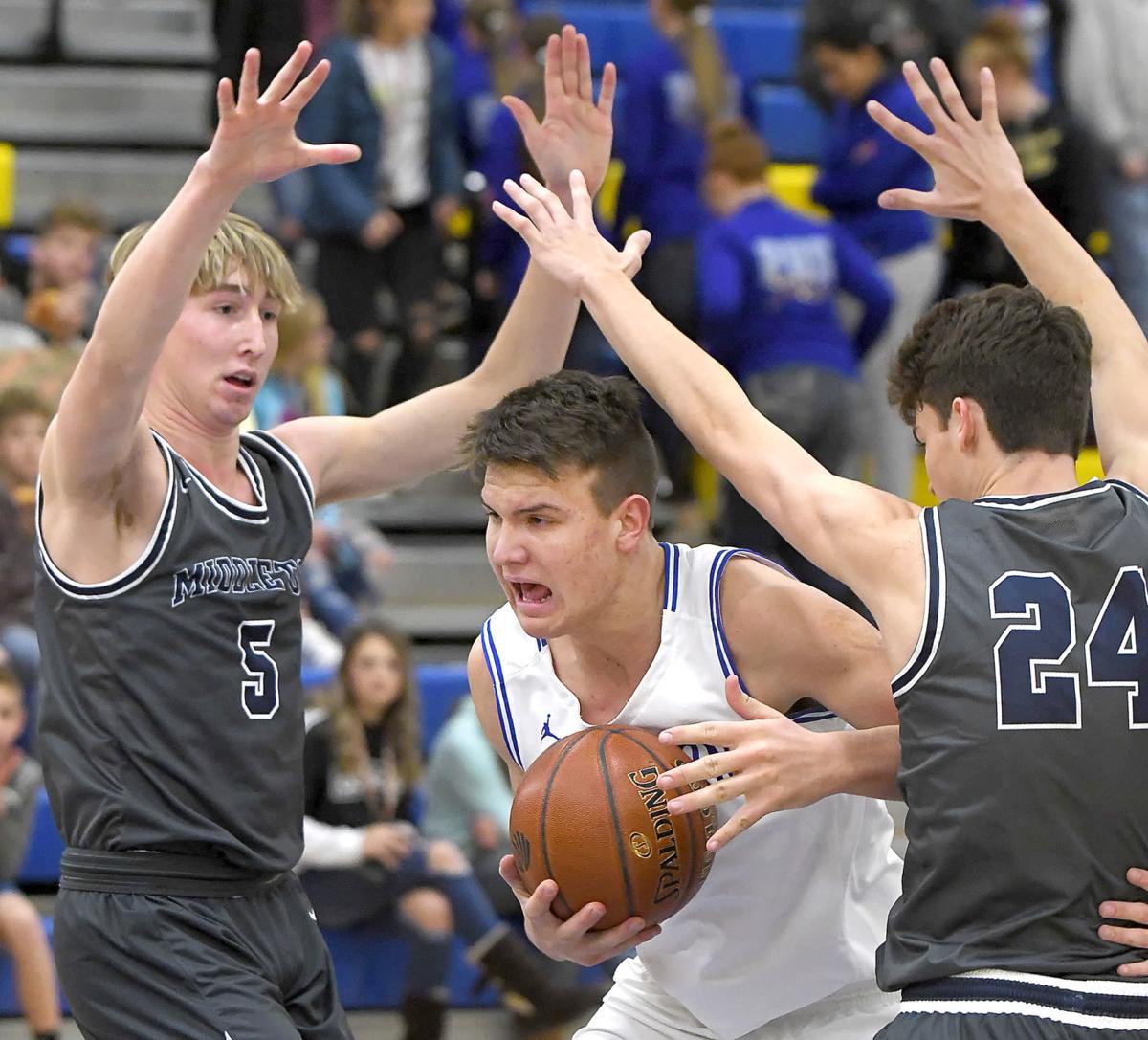 Preston's Ty Hyde looks to shoot the ball as Middleton's Tyler Robinett (5) and Jordan Hymas defend on Friday in Preston.

Preston’s Luke Smellie (3) takes a shot as Middleton’s Jordan Hymas (24) and Cash Cowdery (4) defend on Friday in Preston. To view more photos from the game, go to hjnews.com.

Preston's Ty Hyde looks to shoot the ball as Middleton's Tyler Robinett (5) and Jordan Hymas defend on Friday in Preston.

PRESTON — All impressive winning streaks eventually come to an end.

Unfortunately for Preston's boys basketball team, that was the case Friday night.

Preston went ice cold from the perimeter in the fourth quarter and a very good Middleton team took advantage with a 12-0 run en route to rallying past the Indians, 62-53, in the semifinals of the seventh annual Preston Indian Classic. It was a battle between the top two teams in 4A, according to a recent coaches poll.

In the process, Preston's 30-game home court winning streak was terminated, and it's the first time the Indians won't play in the championship game of their own tournament. Preston had prevailed in the title tilt the past two seasons and five of the first six.

"Last year, (Middleton) was a very good team and last year they were mostly juniors, and they had their whole team returning," Preston head coach Tyler Jones said. "Last year in the state tournament, they led most of that game in the first round (against us) until the fourth quarter. So, they came here, they wanted another shot at us ... and give them credit. They deserved it and they were the better team tonight."

Preston (4-1) went more than five minutes without scoring in the fourth quarter, and Middleton capitalized with the aforementioned game-changing spurt. Standout Preston point guard Luke Smellie got to the basket at will in the opening half but, to their credit, the Vikings (5-1) forced the Indians to settle for perimeter shots with the game in the balance. The hosts had plenty of open looks, but ultimately failed to knock them down.

"(Middleton) started putting (6-foot-7 forward Tyler) Robinett under the basket to protect it, and they kind of made other people try to beat them," Jones said. "And we had shots, but we just didn't get them to fall, and hopefully next time they fall. You know, Luke had a great game and he was our advantage, and they did a better job in the second half of trying to take that away."

Smellie was outstanding in the opening half for the hosts. The senior went off for 16 points and four assists in the first half and finished through contact to convert on a trio of and-on opportunities. Additionally, No. 3 went on a 8-0 run himself to give the Indians a 19-15 lead.

Preston took a 29-25 advantage into the half.

"Yeah, I'm glad I could help out my team, but I've got to do more, though," said Smellie, who netted a game-high 21 points.

In addition to Smellie, Gabe Hammons sparkled for Preston. The junior came off the bench to bury four 3-pointers and score 16 points. Hammons scored the first four points of the fourth quarter and give the Indians a 46-42 lead.

"Gabe's been big for us," Jones said. "He can really shoot it. ... Teams are going to try to take Ty (Hyde) away and they're going to be out on Scott (Dunn) and Luke, and Gabe's a guy that can step up and hit shots. He was big tonight and he's been big early in the season for us."

Indeed, Middleton did a great job of defending Hyde and Dunn, who were limited to seven points apiece. Hyde has dominated nearly team Preston has squared off against in the low post, but the senior got in foul trouble midway through the first quarter and didn't play the rest of the half.

Nevertheless, Preston managed to take a 32-25 lead advantage in the third quarter on a Smellie 3-ball. Middleton bounced back, though, as it drained five treys, four in a three-minute span, in the quarter.

The two teams were knotted up at 42-42 heading into the final eight minutes of action.

Robinette and Taede Stucki netted 17 points apiece for the Vikings, while Cash Cowdery added 13. Stucki drilled five of his team's 11 buckets from downtown.

Preston will play Bonneville in the third-place game on Saturday afternoon.

"You know, I'm glad that (this loss) happened at the start of the year," Smellie said. "We're going to take this game and we're going to learn from it, and we'll come back better then this, I promise."

Preston earned the right to play Middleton thanks to its 70-62 triumph over Star Valley (Wyoming) in the first round. Hyde scored 17 points, Dunn and Smellie combined for 29, and Hammons added 10.

Dunn went on a scintillating 11-0 spurt by himself in the final two minutes of the third quarter to give the Indians a 51-39 advantage. The senior had a pair of four-play plays and hit a 3-pointer just before the buzzer.