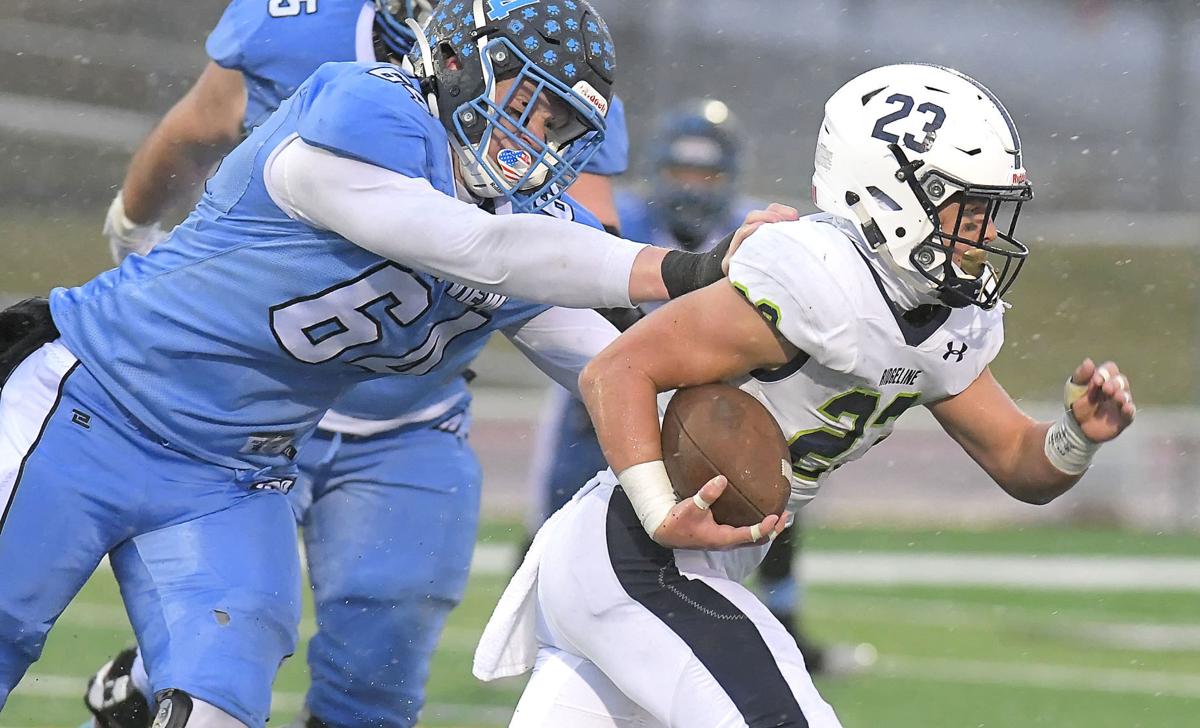 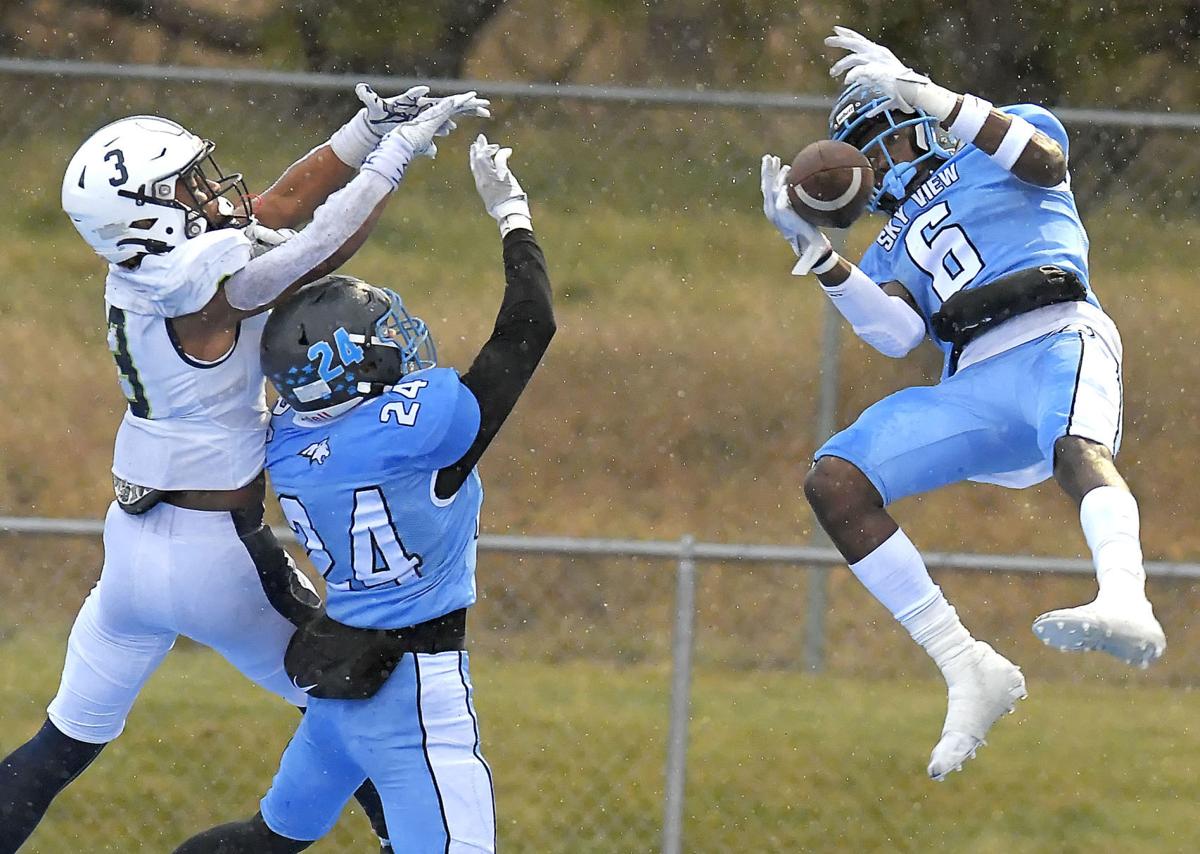 SMITHFIELD — Weather conditions were less than ideal Friday afternoon at Hansen Field, but the Bobcats aren’t going to complain to much. After all, they get the opportunity to defend their state title

That’s right, top-seeded Sky View is returning to the 4A championship game. The Bobcats caused havoc and took advantage of a short-handed Ridgeline team in the semifinals of the 4A state playoffs. The hosts blanked an opponent for the third time this season and on a big stage with a 28-0 victory in windy conditions with constant rain and snow.

“We’re ecstatic, frozen ecstatic right now,” SV head coach Christopher Howell said. “I’m so proud of our kids and their ability to overcome some adversity. This was not an ideal situation, but I’m proud of our kids for the way they came out, fought, scrapped and battled, found ways to put points on the board, found ways to get stops. It wasn’t a pretty game, but both teams played so, so hard.”

The Bobcats (12-0) scored on their first possession and never looked back in picking up their 24th straight win, dating back to last season.

“This is the exact same weather we played them in last year and we knew if it was rainy and snow, that would help us because they (Riverhawks) are really good throwing the ball,” said SV quarterback Kason Carlsen, who passed for two touchdowns and ran for a third. “And we are a great run team. We knew we would have to protect the ball and have no turnovers.”

The Riverhawks (9-2) began the game without three starting offensive linemen, due to COVID.

Then, toward the end of the second quarter, the visitors lost starting quarterback Kaden Cox to an injury. Cox had to be helped off the field and did not return after passing for 93 yards on 7 of 8 attempts in tough throwing conditions.

“Rough game for us,” Travis Cox said. “Kaden broke his leg, but he should recover just fine.”

“Once Kaden (Cox) went out, it became a matter of stopping the run,” Howell said. “It’s a really hard situation for them. My compliments to them, because they had a great plan. They have a great team and have played really well all year long.”

Sky View finished with 205 yards of total offense. Carlsen completed just 3 of 6 passes for 72 yards, but made big plays when they were needed. The senior also rushed for 55 yards on 14 carries. Running back Walter Collins rushed for a game-best 59 yards on 15 carries.

Defensively, Carson Dunkley, Bracken Schumann and Hunter Lewis each had eight tackles for the Bobcats. Dunkley and Schumann each had two sacks.

Ridgeline finished with 168 yards of total offense. Webb completed 4 of 14 passes for 44 yards as the Riverhawks ended up with 137 yards through the air. Jovesa Damuni caught six balls for 103 yards. Running back Noah White had 38 yards on the ground on 12 carries.

The Riverhawks took the opening kickoff right as the rain began to fall. They picked up two first downs before stalling and having to punt. A sack by Schumann helped stop the drive.

Sky View then marched 71 yards on 13 plays — all on the ground — to paydirt on its first drive of the game. Carlsen picked up a first down on fourth-and-2 with a 4-yard gain to keep it alive. On third-and-goal from the 2, wide receiver Isaac Larsen took a handoff and reached the end zone on an end around with 2:27 left in the opening quarter to give the hosts a 7-0 lead.

It would stay that way the rest of the first half.

“Kason called the right play at the right time, and I just ran it in,” Larsen said. “... Points were hard to come by as we started off a little lazy, which is not ideal. But we got it back in the second half.”

Like their first possession of the game, the Bobcats got the ball to start the third quarter and quickly scored. Carlsen completed his first pass on just his third attempt for 20 yards to Samuel Thatcher. Then he found wide receiver Trey Nyman wide open for a 41-yard TD just two minutes into the second half.

“It really comes back to our O-line,” Carlsen said. “They were able to control the line of scrimmage. Our running backs were running hard, and our receivers were running really nice, clean routes. ... We talked about getting the ball to Trey, and we were able to execute that play.”

Collins blocked a punt to set up the next Sky View score. It took the Bobcats three plays to cover 17 yards. Carlsen hit Larsen in the corner of the end zone to make it 21-0 with 6:43 to play in the third.

“Me and Kason just looked at each other, he gave me the signal, threw it and I went up and got it,” Larsen said.

Sky View missed a 35-yard field goal early in the fourth. However, the Bobcats added a final TD when Ridgeline was forced to go for it on fourth down trailing by three scores. A short field allowed the Bobcats to add the final TD with a Carlsen run from three yards out on fourth down.

The Bobcats preserved the shutout when Cole Watterson came up with an interception late in the contest.

“We grinded through it,” Larsen said. “It’s cold out here, but you have to play through the weather, and we did.”

Sky View has now won all five meetings with Ridgeline. During the regular season, the Bobcats needed a field goal in the final seconds to win, 17-14. Both of the Riverhawks setbacks this season came at the hands of the Bobcats.

This is the furthest Ridgeline has ever made it in the playoffs. The school opened in 2016. Sky View has been in the semifinals four times in the last six years.

In the championship game next week, the Bobcats will try to accomplish something no team at Sky View has ever done — have a perfect season.

“It’s good to be playing for another championship, but the job is not finished,” Carlsen said. “One more week and then we can be really, really happy.”