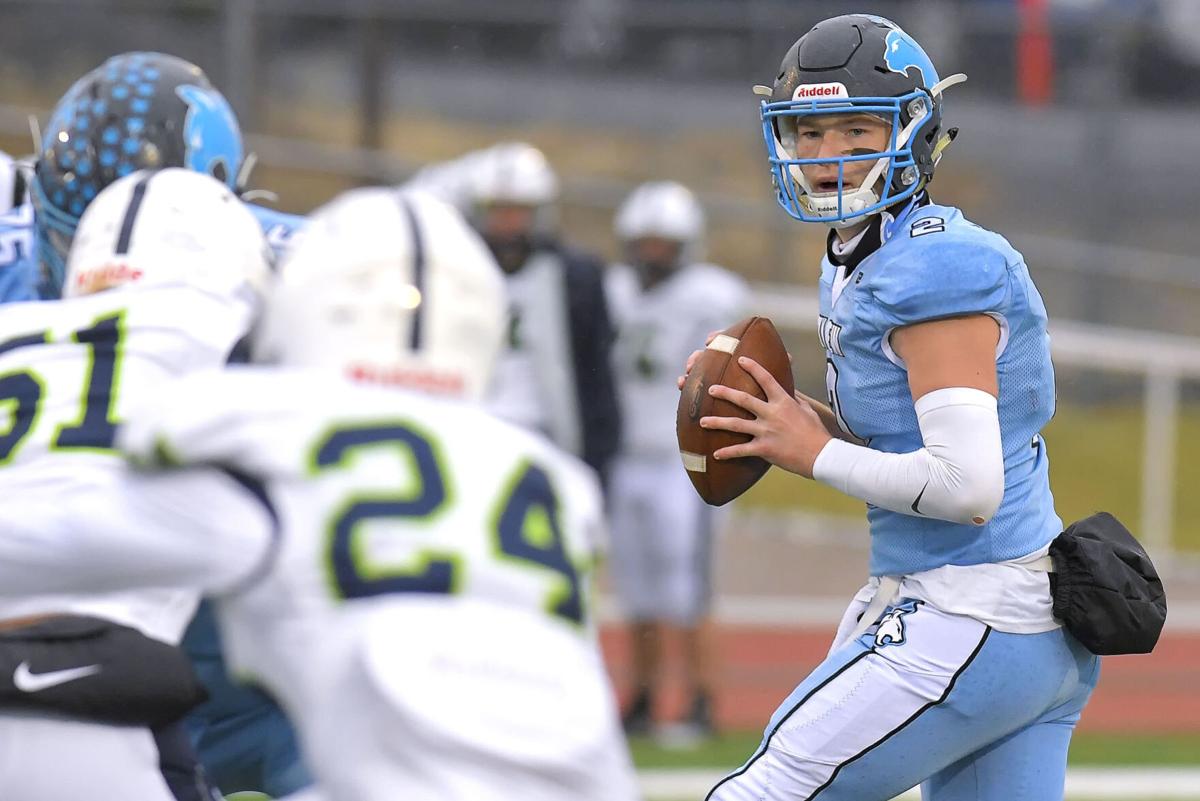 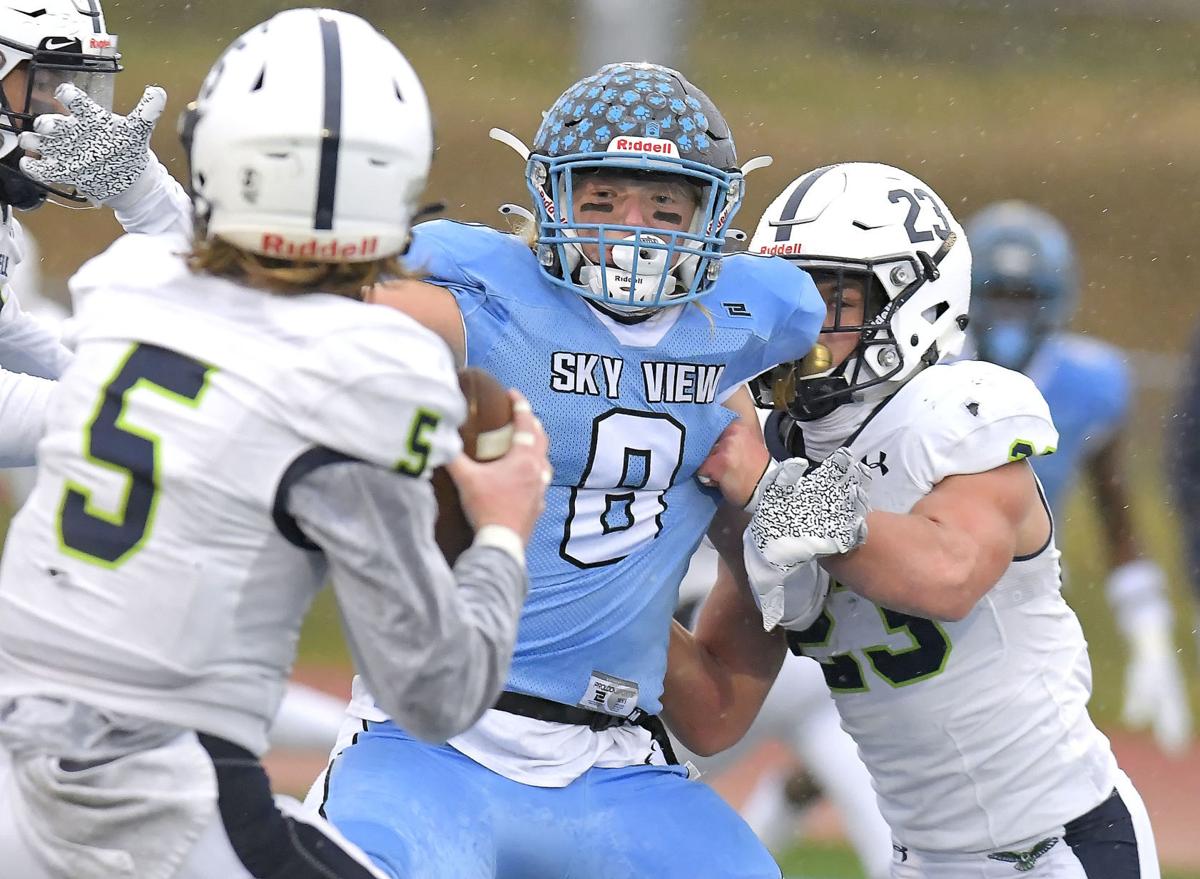 It comes down to the top two seeded teams to decide the 4A state football title.

Defending state champion and top seed Sky View (12-0) travels south to take on second-seeded Pine View (12-1) in St. George at Greater Zion Stadium on the campus of Dixie State University on Saturday. Kickoff is set for 2 p.m., and the game will be live streamed on KSL. Only about 300 fans per school will be allowed in.

“It’s good to be playing for another championship, but the job is not finished,” Bobcat quarterback Kason Carlsen said. “One more week and then we can be really, really happy.”

That is if they win. The Panthers have been on a roll since losing their season opener to Ridgeline, 42-38, at a neutral site. Pine View has won 12 straight and most by large margins.

“They (Panthers) are super explosive,” SV head coach Christopher Howell said. “Of all the teams I’ve ever prepared for, they have huge, explosive play potential.”

While Pine View has had an impressive season, averaging 41.6 points a game and allowing 19.2 with one shutout, the Bobcats have been just as good. Sky View has averaged 37.2 points and given up only 11.6 a game, holding three opponents scoreless.

“Defensively, we can’t give up huge, shot plays,” Howell said. “That’s critical. We have to take advantage of our possessions on offense. I don’t want it to become a shootout. We need to score when we get opportunities.”

Neither team has really had a close game in the playoffs. Pine View has won by an average of 38.3 points in three playoff wins, while Sky View has prevailed by a 28.7 average.

The Bobcats bring a 24-game winning streak to the title game. It’s the ninth-longest streak ever in the state and third-longest active streak, trailing Corner Canyon (39) and Beaver (25). Having won the championship last year and returning a wealth of experience will certainly be beneficial to Sky View.

“Last year we went through an exercise in the classroom as part of our meetings to get their thoughts and feelings (before the championship game),” Howell said. “Last year guys were talking about being anxious and nervous because they hadn’t been there. We went through the same thing yesterday (Tuesday) and the mindset was totally different. I think that is good. ... Hopefully having been there last year will keep our guys hungry.”

While many of the Bobcats have played in a championship game and been successful, some haven’t.

“This is my first time (to play for a championship), but I’m excited,” said defensive back/wide receiver Isaac Larsen, who had played at Logan before moving to Smithfield less than a year ago. “I’m excited and ready to go.”

Sky View had to deal with less-than-ideal weather conditions last Friday in a 28-0 semifinal win against Ridgeline in Smithfield. That shouldn’t be the case this Friday. The Bobcats will head south on Friday and do a walk through before the game on Saturday.

Pine View got to the title game after throttling No. 3 Snow Canyon last week, 48-7. The Panthers live off big plays, with senior quarterback Brayden Bunnell passing for 3,667 yards on 249 of 401 attempts, with 39 touchdowns and 14 interceptions. Leading wide receiver Dominque McKenzie has Howell’s attention as he averages 19.8 yards a catch and has hauled in 80 passes for 1,585 yards and 19 TDs.

“He (McKenzie) is one of the fastest kids in the state,” Howell said.

There are three primary targets Bunnell goes to in McKenzie, Preston Mann (52 catches, 914 yards, 10 TDs) and Christian Bailey (47, 512, 7). Plus, the Panthers can run the ball. Senior Enoch Takau has had the most attempts with 150 rushes for 880 yards and 15 TDs, but there are two other running backs to be aware of the Bobcat coach said.

“I counted the other day (and) they have had 80 pass plays of 15 or more yards this year,” Howell said. “... We have got to keep them (receivers) in front of us. In my opinion, it’s very similar in the way we played Ridgeline. You can’t allow any of those big plays to turn into touchdowns.

“... I’m super impressed with their run game. They have two big guys that are physical and one that is faster.”

Defensively, linebacker Dylan Becker leads the Panthers with 61 tackles and two interceptions. Defensive end Rick Mua’e, who has committed to Utah State, has played in nine games and has contributed with 39 tackles, including 10 for loss, and three sacks. He has also forced two fumbles.

“They have a pretty good defense,” Howell said. “Their defensive end (Mua’e) is a good player. They are very solid and make plays.”

Establishing the running game will be vital for Sky View. Obviously, the Bobcats want to score points, but keeping the ball away from the Pine View offense will also be helpful.

Running back Walter Collins leads Sky View with 917 yards on 146 carries and 14 TDs. Carlsen has rushed for 503 yards and nine scores. Larsen is also an option and has scored three TDs on the ground. Junior Truman Moser has also added some punch in the playoffs with four TDs.

On defense, the Bobcats are led by linebacker Hunter Lewis, who has 126 tackles, five sacks and two INTs. Five Sky View players have multiple picks, led by Larsen with four. Luke Radford and Bracken Schumann have each recorded five sacks. Collins is second on the team with 68 stops.

“We have played pretty good defense all year, so our goal is to continue to play good defense,” Howell said. “We feel confident our defense can stop them. It’s just a matter of execution.”

For this time of year, the Bobcats are relatively healthy.

“We are healthy enough,” Howell said. “We do have some guys that are beat up, but everybody will play this week with the exception of Davis Hall, who may hold for us. His shoulder got worse last week. He has done an unbelievable job in our nickel spot. Replacing him is a challenge.”

Then there is the whole COVID-19 issue to deal with. The team was tested Wednesday afternoon. Last week Sky View was without one non-starter because of COVID.

“You never know who you might lose,” Howell said. “We have done temperature checks every day, they are masked up in the weight room and throughout the day in the classroom. We try and do our best as coaches to stay covered as well. We’ve tried to make it a huge point of emphasis, but it’s a total crap shoot.”

• Bobcat kicker Kasen Erickson needs four extra points to move into fifth on the career extra points list in the state, counting all classifications. He enters the game with 167.

• The Bobcats are 1-1 in state championship games, while Pine View is 0-6.

• These two schools have met only twice, both times in the playoffs. Pine View won a semifinal game in 2007, while Sky View was victorious in a quarterfinal game in 2017.