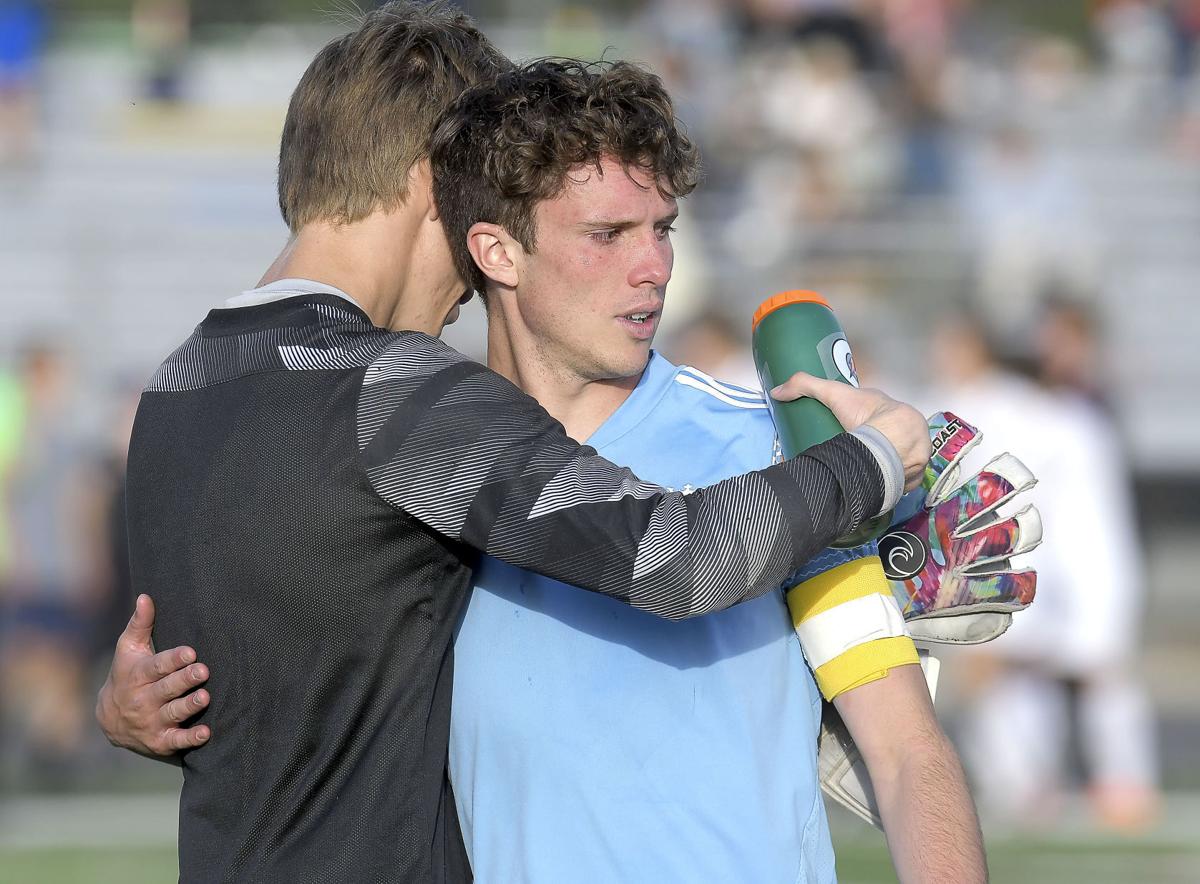 Sky View goalkeeper Cordell Ludlow, left, hugs Caden Penrose after the Bobcats lost to Stansbury in a shootout in a semifinal game at the 4A Boys Soccer Championships on Monday in Sandy. 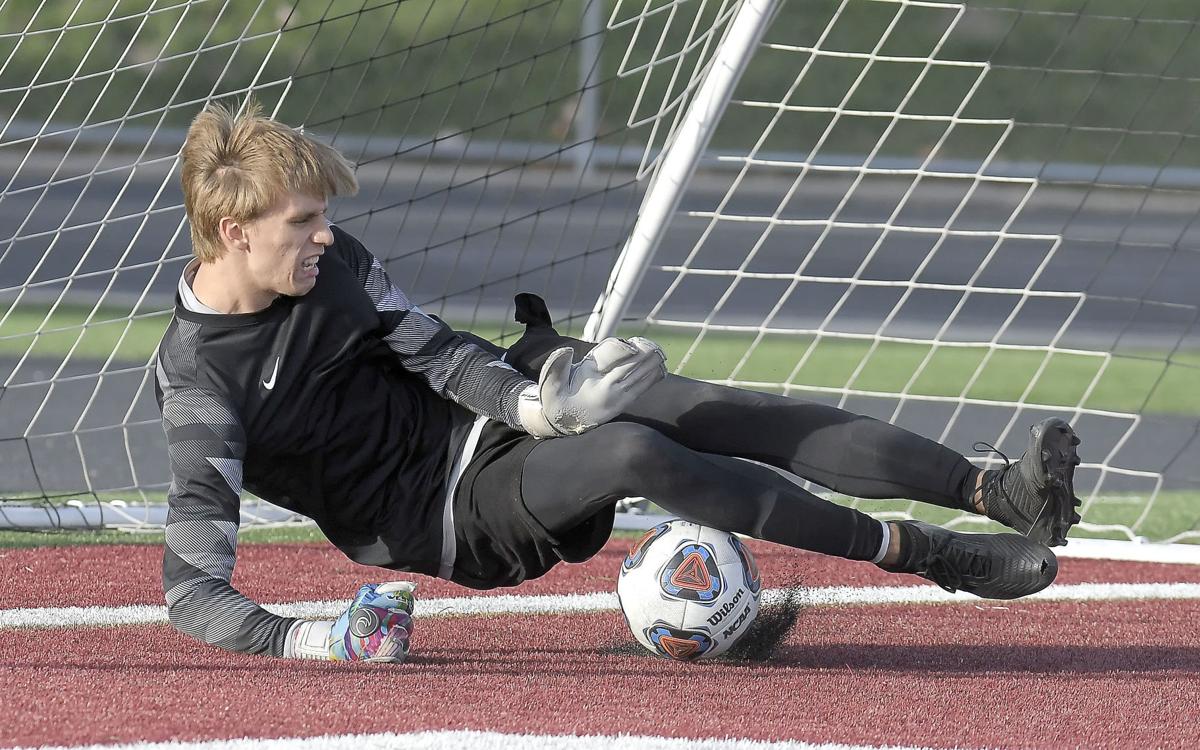 Sky View goalkeeper Cordell Ludlow saves the ball during a shootout against Stansbury in a semifinal game at the 4A Boys Soccer Championships on Monday in Sandy. 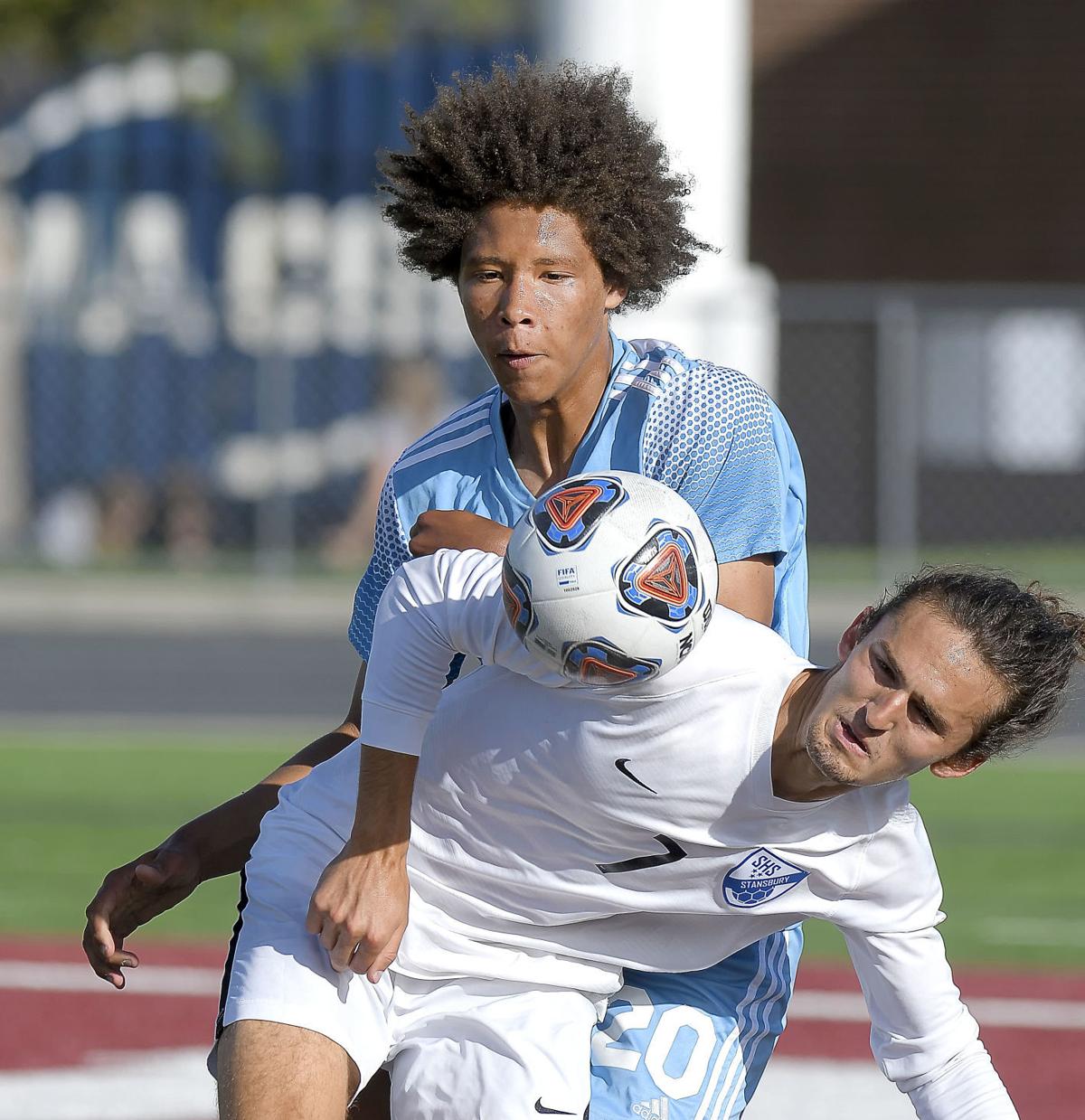 Sky View’s Taten Merrill (20) and Stansbury’s Samuel Holdstock fight for the ball in the first semifinal game of the 4A Boys Soccer Championships on Monday in Sandy.

Sky View goalkeeper Cordell Ludlow, left, hugs Caden Penrose after the Bobcats lost to Stansbury in a shootout in a semifinal game at the 4A Boys Soccer Championships on Monday in Sandy.

Sky View goalkeeper Cordell Ludlow saves the ball during a shootout against Stansbury in a semifinal game at the 4A Boys Soccer Championships on Monday in Sandy.

Sky View’s Taten Merrill (20) and Stansbury’s Samuel Holdstock fight for the ball in the first semifinal game of the 4A Boys Soccer Championships on Monday in Sandy.

SANDY — It was exactly the kind of start the Bobcats were hoping for, but the finishing product eluded them at crucial junctures later in the match.

Sky View scored less than five minutes into the first of two semifinal matches at the 4A Boys State Soccer Championships and had a couple more prime opportunities to extend its lead. Stansbury was able to battle back with an equalizer in the 26th minute, and Monday’s game ultimately was decided in a shootout.

Both goalkeepers were incredible in the shootout, where the eighth-seeded Stallions prevailed 3-2 and advanced to their first state championship match in program history. Sky View keeper Cordell Ludlow deflected Stansbury’s final shot from the penalty spot, but it had enough spin and power to trickle over the mouth of the goal. The fifth-seeded Bobcats had a chance to extend the shootout, but their last shot caromed off the crossbar.

The second semifinal showdown between Mountain Crest and Ridgeline was still going on at the Herald Journal’s print deadline.

“I’m proud of the boys,” SV head coach Jorge Cruz said. “Hopefully this is a good learning lesson and we continue strong for next season. ... We’re trying to establish a good program where we can stay and challenge everyone every season, so that’s the end for this (season). Hopefully next season can end a little different.”

It was an agonizing way for Sky View’s six-match winning streak to come to an end. The Bobcats (13-5) outshot the Stallions (13-4) by a 29-9 clip during the 100 minutes of action, including a 12-3 edge in shots on goal. However, the Region 11 co-champs also scuffed a few shots and misfired on a couple of golden looks inside the 18-yard box.

The Stallions appeared to gain confidence as the match progressed and even found a way to keep the Bobcats off the scoreboard when they were down a player. Stansbury’s Archer Loertscher was issued a second yellow card with 3:24 remaining in regulation.

“I believe our decision making today was definitely off,” said Cruz, who felt nerves got to his players at times Monday. “There were times when we needed to shoot and we passed. There were times when needed to pass and we took the shot. ... It could have been two or 3-0 in the first 15 minutes, but we didn’t finalize it. ... But, I mean, give them credit. They played overtime with 10 players and they did great. We weren’t able to utilize our extra player.”

Sky View was in control for the lion’s share of the first half and quickly took the lead on a nice one-time effort from Cole Thedell, who was the recipient of an accurate pass from Caleb Miller inside the 18. Stansbury capitalized on a Sky View half clearance roughly 21 minutes later and equalized on a nice strike by Dante Sylvestri.

Ludlow only had to make three saves during regulation and the two overtime sessions, but two of them were game-changers. Stansbury had a pair of one-v-ones and Ludlow denied them both times. Likewise, Stansbury keeper Devun Collins also came up big for his side.

“I think Cordell was amazing not just today but the whole season,” Cruz said. “He gained confidence game by game. I mean, Cordell could not do it alone. He had an amazing four, five players in front of him, but yeah you’re right, Cordell saved us from a couple one-and-ones. He was at the right place, minimizing (their shooting) angles. He was just great.”

Collins and Ludlow both came through with two diving saves in the shootout, and Ludlow was unlucky on what turned out to be the aforementioned game-winner from Stansbury’s Jace Toland. Kasen Erickson and Daion Leng converted from the penalty spot for the Bobcats.

It was the final match for eight Sky View seniors — a few of whom were varsity mainstays on the 2019 4A state championship side.

“We did have a really good season,” Cruz said. “We started a little rough, but we found the right team, the 11, 13, 15 players, a good rotation. It seems like we found it. We were doing pretty good, we were finishing, but today’s game it just wasn’t (quite) there.”