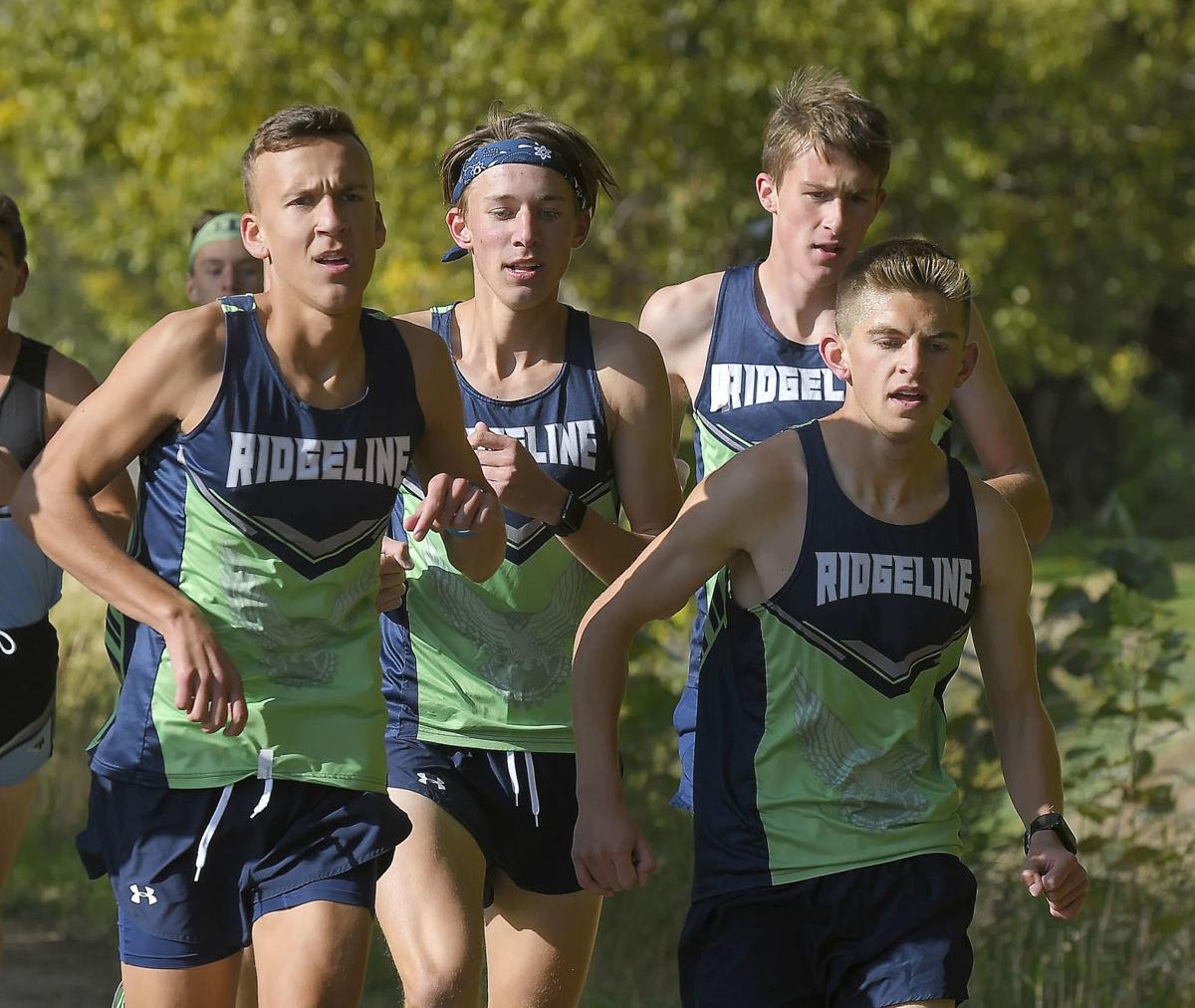 A pack of Ridgeline athletes run together during a cross country meet on Wednesday in Smithfield. The Riverhawks were the top team. 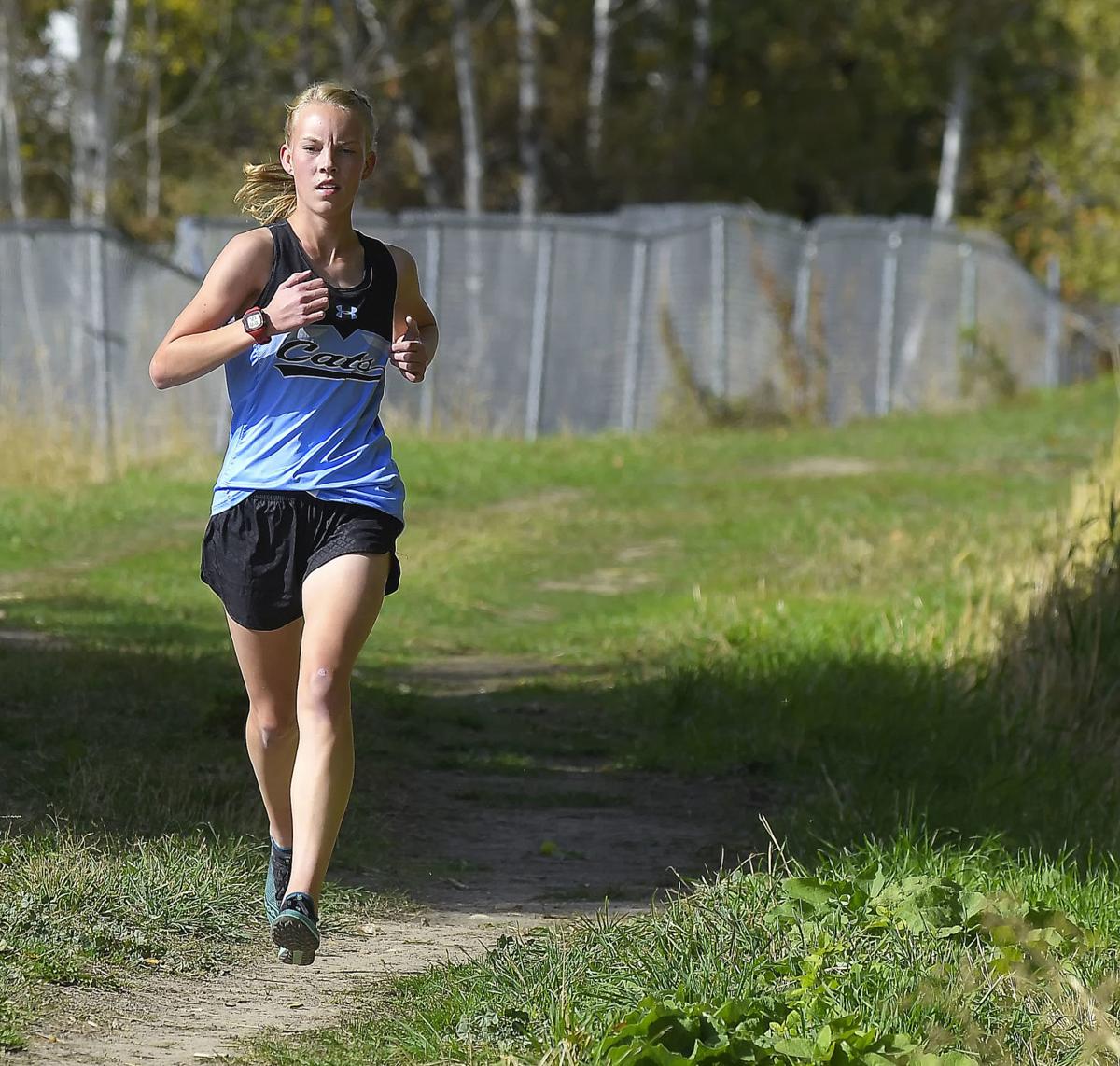 Sky View’s Kate Dickson runs on a path during a cross country meet on Wednesday in Smithfield. She took first in the girls race.

A pack of Ridgeline athletes run together during a cross country meet on Wednesday in Smithfield. The Riverhawks were the top team.

Sky View’s Kate Dickson runs on a path during a cross country meet on Wednesday in Smithfield. She took first in the girls race.

SMITHFIELD — For two miles the Bobcats and Mustangs did all they could to build leads against the Riverhawks Wednesday afternoon.

The last 1.1 miles were then spent trying to hold off a Ridgeline charge. And it most certainly came from the three-time defending region cross country champs. The Riverhawk girls and boys have won every region title since the school opened.

Sky View hosted Ridgeline and Mountain Crest on sunny, but windy and cold afternoon in the final tune-up meet before the Region 11 Championship next Tuesday. And while the Bobcats and Mustangs enjoyed some success Wednesday, the Riverhawks once again proved they are a solid team in 2019.

Ridgeline treated the meet a bit differently than the other two schools, asking their varsity runners to run as a pack for the first two miles. Then they were free to run harder.

“The goal is to always win,” said Riverhawk Quinten Wright, who won the boys race, just edging teammate Teyvin Broadbent at the line. “But they (leaders) were out there a ways. I said, ‘I don’t know boys. We might not catch them.’ I love running with Sky View. They are great kids.

Both Wright and Broadbent were credited with the same time, 16 minutes, 34 seconds. Broadbent and Spencer Adams were in charge of the watches to keep the Riverhawk pack in check.

“We kept us locked in the whole time,” said Broadbent of himself and Adams. “We were all trying to run the same face at first. They (leaders) were out there a ways. It’s hard to not go after them. We just know how to pick it up the last mile.”

The Ridgeline boys ended up having the top three finishers — Adams was close behind his teammates in 16:42 — and five of the top seven. In fact, the top seven Riverhawk finishers were among the first 11 to cross the finish line. The top five count toward the team score.

In the girls race, the Riverhawks couldn’t overtake the top two runners, but that didn’t matter in the team standings. Ridgeline had their top seven runners also in the first 11 finishers, just like the boys. The Riverhawks had 32 points to win the meet, followed by Mountain Crest (47) and Sky View (58). The Mustangs were without defending region champion Spencer O’Very, who has been sick and didn’t run Wednesday.

In the boys race, Mountain Crest’s Cameron Swenson set the early pace, along with fellow Mustang Braxton Stoker and a pair of Bobcats in Truman Engler and Jared Hunt, who is still working his way back from a nasty injury.

A mile into the race, there were seven runners out in front of a pack of eight Ridgeline runners. The Riverhawks were just waiting to be turned loose at the 2-mile mark.

“I knew they (Riverhawks) were going to be coming, but didn’t think they would catch us so fast,” said Hunt, who ended up finishing fifth in 16:52.

“When they (RIverhawks) started to pass me on an uphill, my legs just weren’t feeling super strong,” Engler said.

On the last trip of three along a canal just east of Sky View High School was where the Riverhawks swooped into the lead. By the time they entered the football stadium and did a three-quarter lap around the track to the finish line, it was a race between Ridgeline runners for first. Wright and Broadbent were neck-and-neck.

“It gives you quite a boost of energy when you start passing people,” Broadbent said. “... We are feeling ready for region, but we are not dismissing the competition. There are some good teams. We are excited for it. We will be running hard there.”

For the Bobcats and Mustangs, they just tried to hold off as many Riverhawks as possible.

“I tried to stick with them (Riverhawks) for as long as I could,” Engler said. “I lost them, but tried to hold on as much as I could. “... But we feel pretty good going into region. I’m going to taper and make sure my legs feel nice and fresh for region.”

The Bobcat duo was able to get in front just short of the midway point. They held those positions until there was less than a mile to go.

“I wanted to go in strong, be nice and confident and make sure I didn’t go too slow that first mile,” Engler said. “Cameron (Swenson) took it out nice and good and I stuck right behind him. I tried to speed up as the miles came along.”

Benson Weeks, Nate Weston and Collin Simon were close behind the pair of Bobcats to finish sixth through eighth.

“It’s always good to go out and run a mile hard going into region and do it pretty quick,” Wright said. “It’s a good confidence booster. ... I think we are ready for region. We are pretty locked in. We’ve got a good team and ready to leave it all out there.”

The girls race was not as dramatic, at least for the top individual spots. Sky View’s Kate Dickson took the early lead and just kept building on it. When the junior crossed the line in 19:03 there was no one close behind her.

“I was just tried to have a good race and run hard,” Dickson said. “I wanted to PR this course from the beginning of the season.”

Which she did by 36 seconds.

“Yeah, it made me happy,” Dickson said. “I feel I can go faster on the canal. I like that part.”

Dickson said she heard people cheering for the runner behind her (Jordan Merrill), so that helped her keep a good pace and stay in front.

“I was just trying to push it as hard as I could the last mile,” Dickson said. “... I feel we are ready for region. I want to get in the top five.”

Mountain Crest’s Jordan Merrill was 43 seconds behind Dickson. The freshman finished with a strong kick, but Dickson was too far ahead.

“I really wanted to see how I compare to these girls before region,” Merrill said. “... She (Dickson) took off and I tried to stay with her. She did so good. She was awesome. ... I’m excited and ready for region.”

Mackenzie Duncan was the first Ridgeline girl to cross, taking third in 20:15. The junior tried to pass as many Bobcats and Mustangs as she could when she picked up the pace for the final mile.

“We were given an option to run together or race it and we decided to tempo run the first two miles,” Duncan said. “The last mile we went and tried to see how many we could catch. It was fun for me. I like that.”

“This team is so strong,” Duncan said. “Individually, I would like to be up there (at region). Right now I’m thinking about the team and if I do that it will all work out how it’s supposed to. We are excited and hopefully we are going to tear it up.”