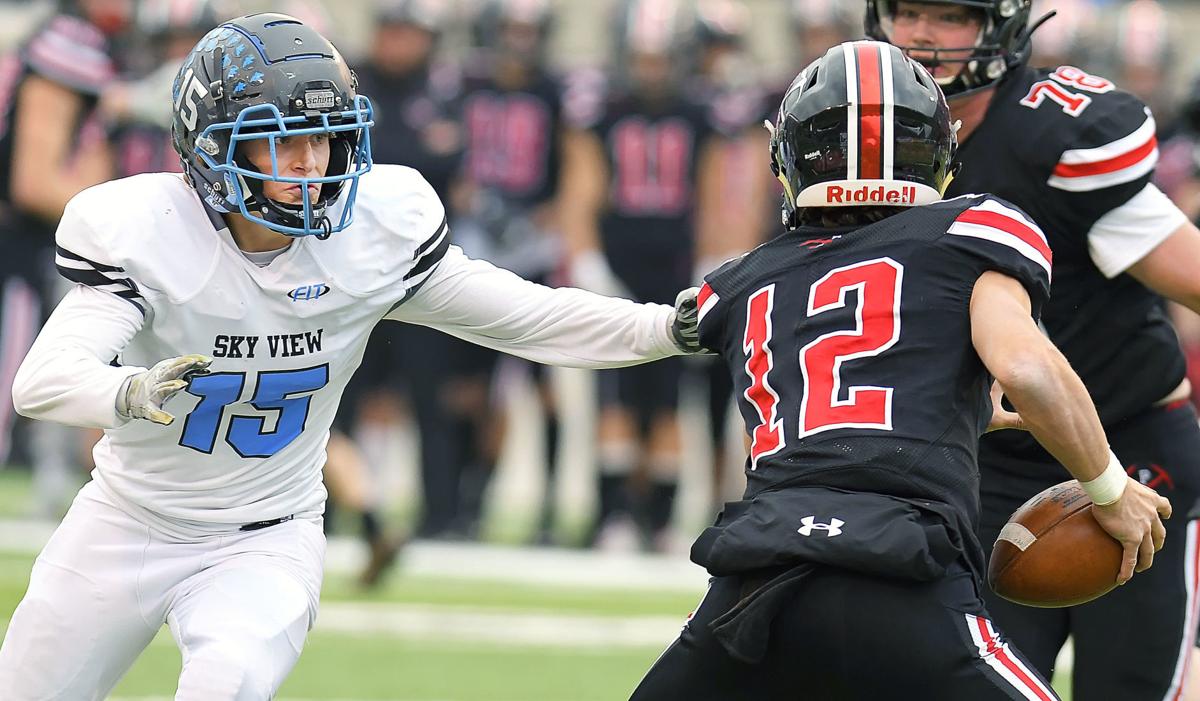 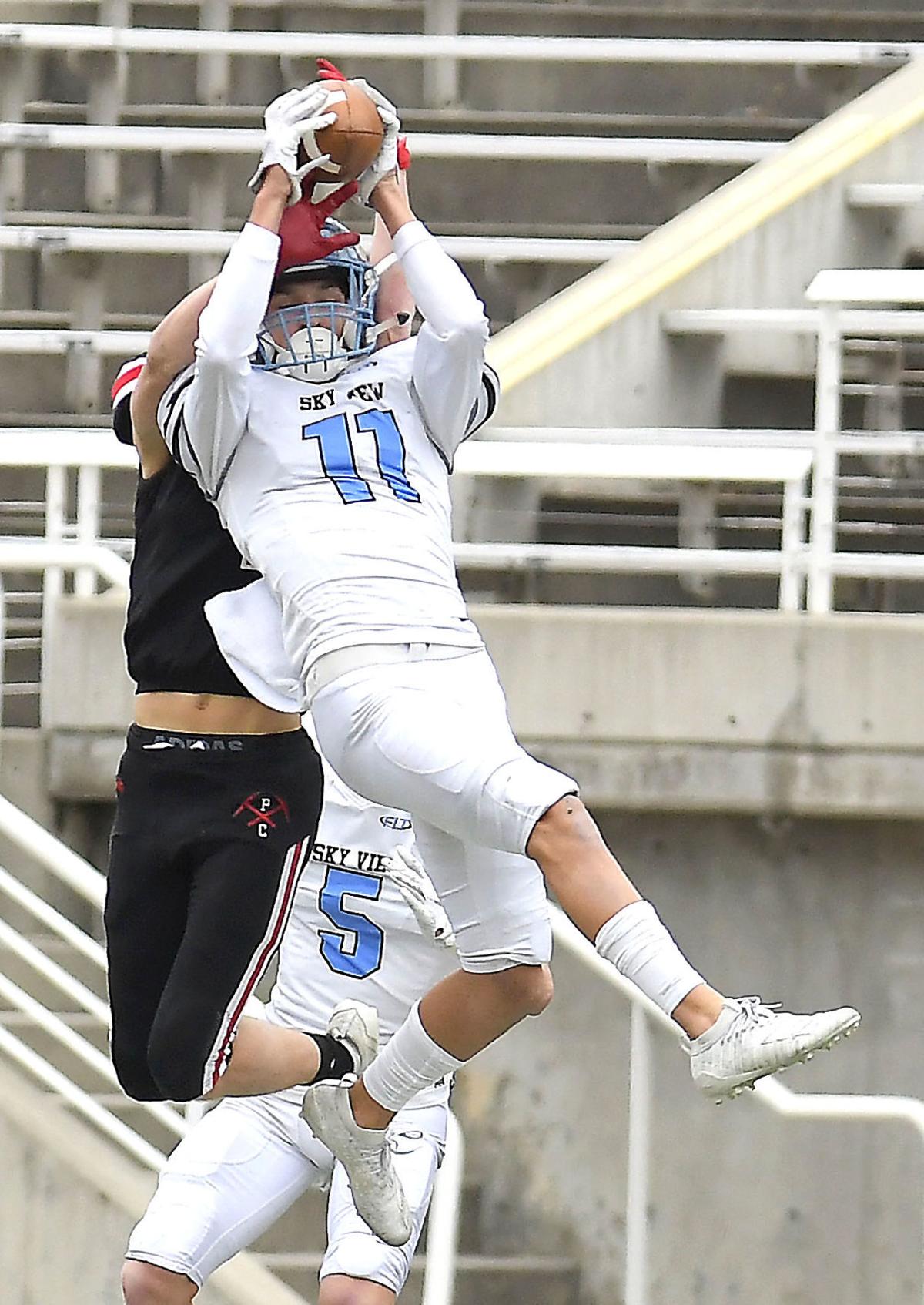 SALT LAKE CITY — A lot of attention was being paid to a Park City defense that ranked first in the 4A classification in scoring defense and held a prolific Pine View offense 24 points below its season average in last Thursday’s semifinal showdown.

Indeed, the Miners have been stout defensively throughout the 2019 campaign, but so have the Bobcats, who were extremely motivated to prove they are elite on that side of the ball.

Sky View’s defense completely stymied an explosive Park City offense in the title game of the 4A State Football Championships on a chilly Friday at Rice-Eccles Stadium. The Bobcats limited 4A’s top-seeded team to 179 yards of total offense en route to a 35-0 dismantling of the Miners, who scored 48 points a week ago and entered the contest having averaged 38.7 points an outing.

“We were so excited and hungry to go prove that we were the best (defense) in the state,” SV defensive lineman Hunter Larsen said. “We’ve been working for this all season and we know that we have a good defense, and we just knew that we had to trust each other and stick with it.”

The second-seeded Bobcats (13-1) weren’t just good defensively against the Miners, they were phenomenal — a trend that was established in their 38-0 triumph over Ridgeline on Sept. 20. Sky View blanked five more teams after Ridgeline, giving the Bobcats six shutouts in their final nine games of the season. The Bobcats matched the 1969 squad for the most shutouts in program history and blanked more opponents than any other team in the state this season, regardless of classification.

“It means so much to me,” Larsen said of the six shutouts. “I mean, we just work hard every day and we trust our coaches, we trust each other and the outcome was great.”

The Bobcats did not allow any points the rest of the season after giving up three touchdowns in the first half of their 49-21 victory over Dixie in the 4A semifinals. Additionally, Sky View kept its opponent off the scoreboard in 20 of the final 24 quarters of the 2019 campaign. The Bobcats only conceded 20 points to a trio of opponents this year — 20 to Stansbury, 24 to Green Canyon and 21 to Dixie.

“The way we look at it — and coach (Christopher Howell) lives by this — is you can’t win if you can’t score,” SV senior Kason Flaherty said. “And I feel like we took it to them today. We worked so hard all season to be the very best team we can be, and I feel like defensively we ended on such a good note.”

The Bobcats set the tone in the opening quarter on both sides of the ball as they outgained the Miners 190-13. Park City (13-1) went three and out on its first two possessions, and the Miners’ third possession ended after only two plays on Bobcat defensive back Scout Morris’ acrobatic interception. The senior ended the season with 10 INTs, which is more than any other high school player in the Beehive State, regardless of classification.

The Miners finally established their vaunted rushing attack during their first drive of the second quarter. Park City, which was trailing 21-0 at the time, took over at the Sky View 34-yard line following a turnover, and promptly marched down to the 1-yard line.

Two straight rushing plays went absolutely nowhere, and Sky View defensive back Traeson Martindale deftly read a play-action bootleg by Park City quarterback Skidmore and sacked him at the 11-yard line. The Miners elected to go for it on fourth and goal, and Sky View’s Mason Falslev made a spectacular one-handed interception in the end zone.

“Oh, it was huge, the sack was huge,” said Martindale, who finished with a game-high 12 tackles. “It killed their whole drive. They were on the 1-yard line and that was a hell of a stop for us.”

Park City’s second possession of the second quarter was also pretty solid, but came crashing to a halt when Larsen sacked Skidmore for a 14-yard loss. It was the senior’s first of two sacks in the game, and he also contributed with four other tackles.

Ultimately, the Bobcats were able to turn the Miners into a one-dimensional team as Skidmore only completed 4 of 12 passes for 20 yards. The senior threw for 1,705 yards and 22 touchdowns, vs. four interceptions, during Park City’s first 13 games this season.

Any slim chance of a Park City comeback was terminated early in the third quarter. The Miners got the ball first and only managed one first down, while the Bobcats capped off a 10-play, 70-yard drive on their first possession with a 4-yard run by Falslev, who trucked over a Park City defender on his way to the end zone.

Even in garbage time, the Miners were unable to break through, because the Bobcats’ D was outstanding from the defensive line, to the linebackers, to the secondary.

“There is not a weakness on our defensive team,” Flaherty said. “There are 11 studs out there and even into our second-string (players) there are just studs. There’s just so much talent (on our defense).”

With the exception of two nice jet sweeps by Mark McCurdy and a couple of dynamic runs up the middle by Dylan Bauer, Park City was never able to get anything going offensively. Indeed, Sky View’s defensive coaches — and offensive coaches, for that matter — did a superb job of game planning for the Miners.

“Our coaching staff, they work so hard,” Larsen said. “They spent hours after every game breaking down all of the film for us, looking at the opponent that we have the next week. I mean, they’ve just awesome. I don’t think that people realize how good of a coaching staff we have. They work so hard for us.”

Martindale was joined by teammate Walter Collins in double-figure tackles as the junior recorded 10. Hunter Lewis and Morris finished with eight and seven tackles, respectively. Samuel Thatcher broke up a pair of passes for the Bobcats, who only allowed the Miners to convert on 1 of 10 third downs and 2 of 5 fourth downs.

“This feeling is unexplainable,” Martindale said. “This is for everybody that’s gone to Sky View and who has walked those halls, and most of all it’s for us, these players and coaches. It feels incredible.”