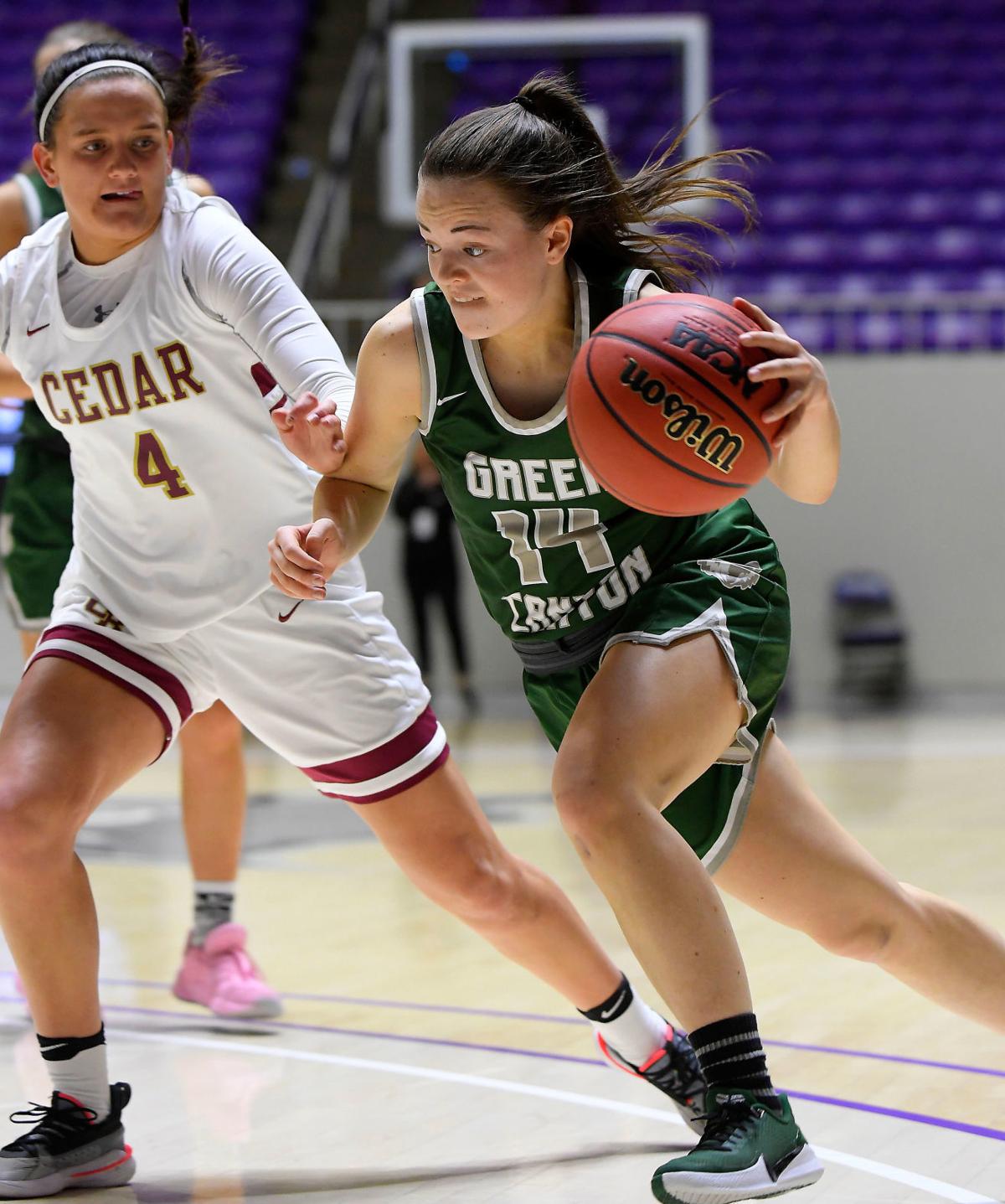 Green Canyon’s Jordyn Thompson dribbles the ball against Cedar during their 4A state semifinal game this past season. Thompson will play college basketball at Peninsula (Washington) College. 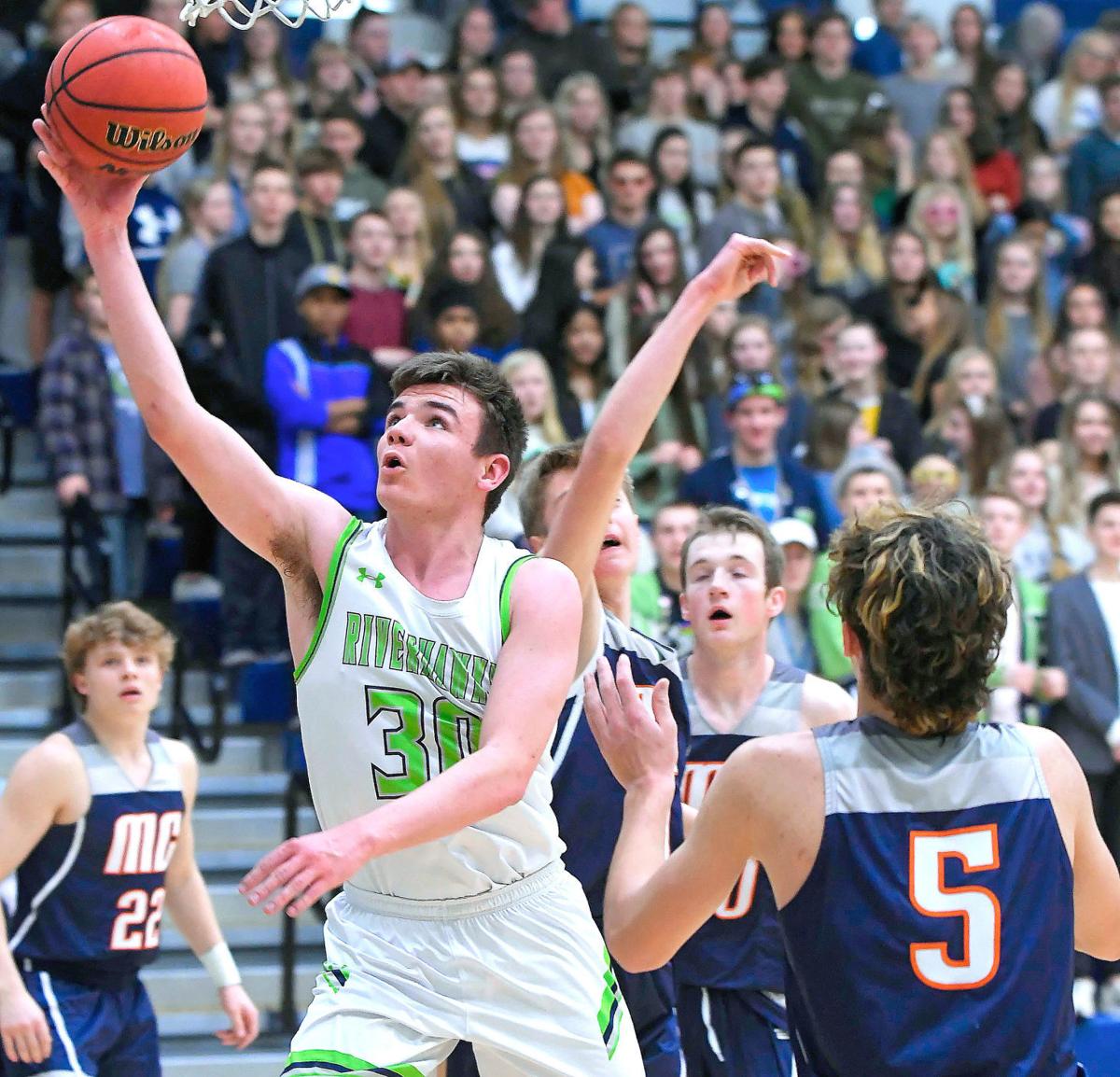 Green Canyon’s Jordyn Thompson dribbles the ball against Cedar during their 4A state semifinal game this past season. Thompson will play college basketball at Peninsula (Washington) College.

One local basketball player returned from a knee injury to help propel her team to the semifinals in the 4A state tournament, while the other helped his squad win more games than the previous two seasons combined.

Both athletes, recent Green Canyon graduate Jordyn Thompson and recent Ridgeline graduate Kaleb Smullin, are hungry to showcase their skills at the next level. Thompson has signed with Peninsula (Washington) College, while Smullin has finalized his commitment with Pacific (Oregon) University.

“It means so much to me,” Thompson said. “I was really scared because of my injury that I might not be able to play in college, just because your junior year is the main (recruiting) year. But it meant so much that coaches were willing to keep reaching out and giving me an opportunity, and seeing that I’ve worked hard to come back.”

Thompson was primed to have a big junior season after excelling as a sophomore for the Wolves in their inaugural campaign. The Hyde Park native led Green Canyon in scoring (11.8 points per game) and finished second in steals (1.4 pg). No. 14 poured in a career-high 29 points on 11 of 21 shooting from the field in a 54-44 win over Sky View.

The daughter of Kari and Spencer Thompson averaged 10 points, 4.5 rebounds and 3.0 steals in Green Canyon’s first two games of the 2018-19 campaign, and then tore the ACL in her left knee in the Wolves’ third preseason contest.

When Thompson returned to the lineup as a senior, she combined forces with a trio of other talented guards in fellow future collegiate players Kinley Falslev, Shante’ Falslev and Kennedy Eskleson. No. 14 averaged 8.5 points, 2.0 rebounds, 1.0 assists and 1.0 steals an outing this past season for the 18-6 Wolves, who gave eventual two-time reigning 4A champion Cedar a scare in the semifinals before falling, 68-61.

Thompson will join a Peninsula program that went 18-7 this past season, including 11-3 in Northwest Athletic Conference play. The Pirates won their final six games heading into the conference tournament, which was canceled due to COVID-19.

When Thompson arrives in Port Angeles, Washington, she will welcomed by a familiar face in friend and former Green Canyon teammate Taylor Hinds. Hinds missed her entire senior season with an injury, but led the Wolves in scoring as a junior. Hinds, Kinley Falslev, Shante’ Falslev and Eskelson were featured in previous signee stories that ran in The Herald Journal.

“I’ve always loved playing with Taylor and it just seemed like she would push me to become a better player,” Thompson said. “... I think it will be a lot easier, just to have somebody from home, especially because we were super close ... and we were able to relate really well, so I think that will make things easier.”

Ironically enough, Thompson and Hinds are two of eight Peninsula students who will serve as Associated Student Council officers during the 2020-21 academic year.

“We both decided to try out for the student council, just so we could be able to become more of the Peninsula culture,” said Thompson, who had offers from multiple junior college programs. “And so now we can both kind of just get to know the student body and dive into the Peninsula (culture).”

Like Thompson, Smullin had a memorable senior season, especially from a team standpoint. The Riverhawks went 17-7 and shared the Region 11 title with defending 4A state champion Sky View, which made it to the 4A championship game. Ridgeline won 15 games the previous two seasons combined.

“It felt really good,” Smullin said. “A lot of people were counting us out and it was really good to go and show them that Ridgeline is a threat, and we’re going to be a threat for years to come as well. It was good to help put Ridgeline back on the map.”

The son of Wendy and Kevin Smullin was one of Ridgeline’s primary options off the bench and averaged 3.7 points, 2.5 rebounds and 0.6 blocks an outing. He ranked team on the squad in blocks, shot 51 percent from the field and 73 percent from the free throw line. No. 30 played his best game against a good Pine View team as he contributed with 13 points, eight rebounds and four blocks.

Smullin will join a Pacific University program that went 7-18, including 4-12 in the Northwest Conference, this past season. The Boxers, who had one player from Utah on their roster this past season, compete at the NCAA Division III level.

“It means a lot,” Smullin said. “It’s been a dream of mine since I started playing basketball. I wanted to see how far I could go, and then it’s going to help me be able to continue to get my education, so sweet, I’m all for it.”

The 6-foot-5, 220-pound post player also had an offer from D-II program Adams State. What ultimately gave Pacific, which is located in Forest Grove, Oregon, the edge?

“I really liked (the program’s) energy and just the positivity they had,” Smullin said. “I went up to a basketball camp they were having for recruits this past summer, and the energy and the feeling there just felt right.”

The Millville native credited Ridgeline head coach Kyle Day for helping him in his development as a senior. Smullin is confident he will bring some toughness to Pacific’s program.