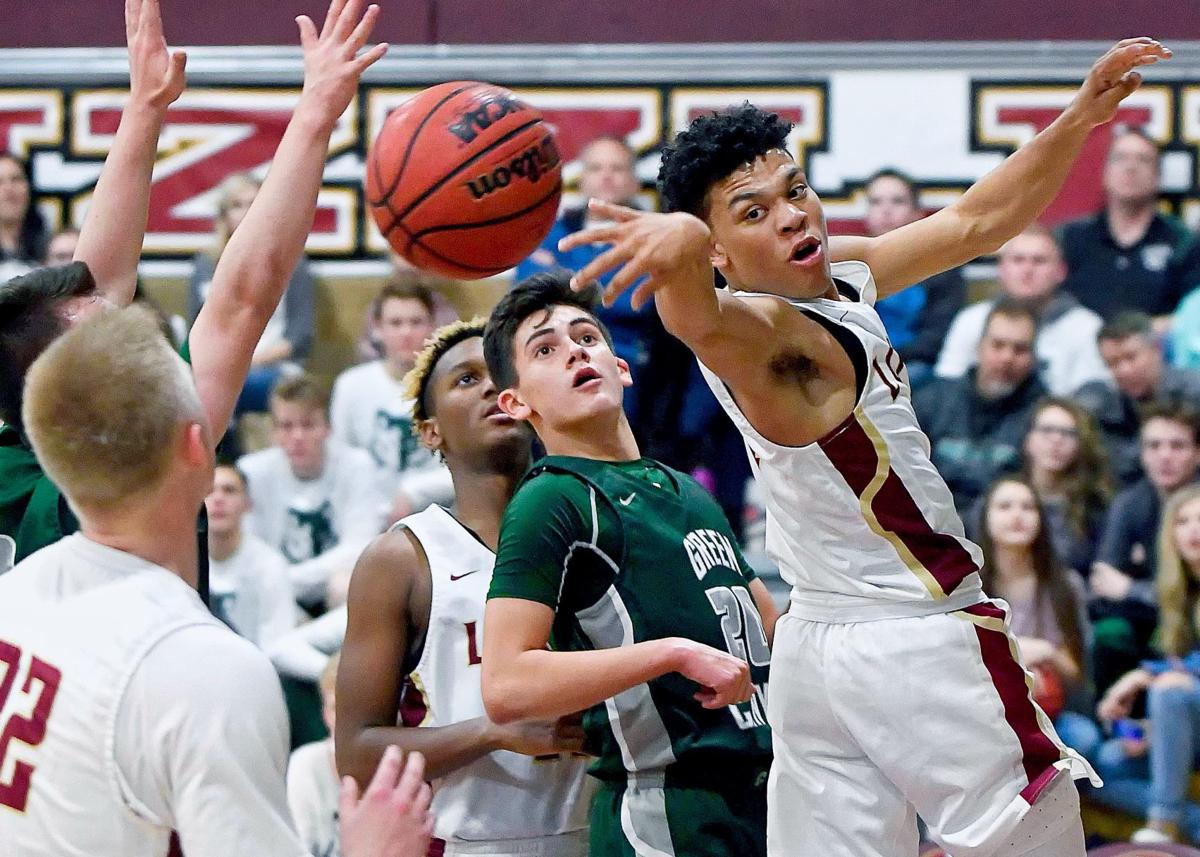 Logan’s Anthony McDade passes the ball in a game against Green Canyon in 2018. McDade has signed to play at Green River (Washington) Community College. 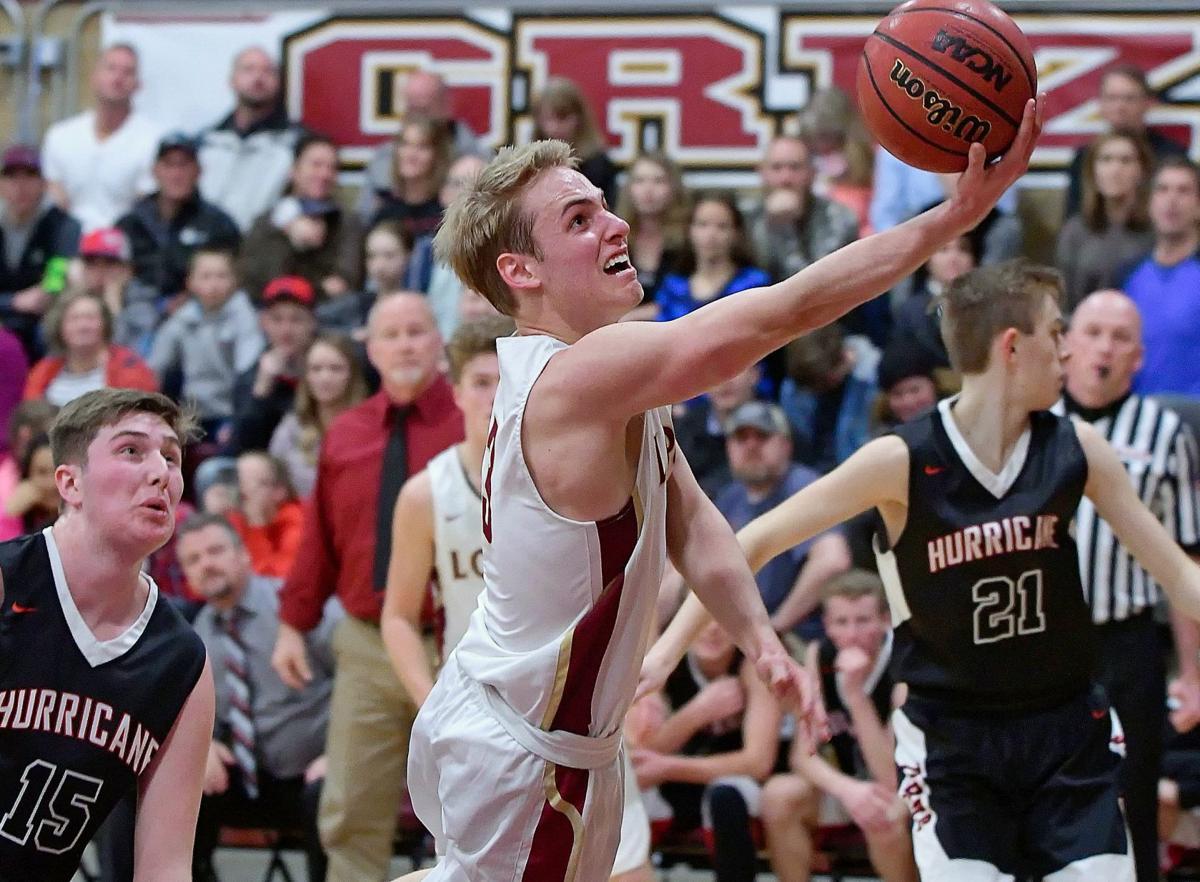 Logan’s Jared Bagley takes a shot against Hurricane in 2018. Bagley has signed to play for Umpqua (Oregon) Community College.

Logan’s Anthony McDade passes the ball in a game against Green Canyon in 2018. McDade has signed to play at Green River (Washington) Community College.

Logan’s Jared Bagley takes a shot against Hurricane in 2018. Bagley has signed to play for Umpqua (Oregon) Community College.

Two former Logan High boys basketball players left an indelible impression as three-year starters, while the other made an immediate impact after moving from Weber County prior to his sophomore year.

All three are superb athletes who have earned an opportunity to play at the junior college level — two of them in the same conference. Anthony McDade has transferred from Northern Iowa Area Community College to Green River (Washington) Community College, while Jared Bagley and Brayden Roberts recently signed with JUCO programs — Bagley with Umpqua (Oregon) Community College and Roberts with Snow College — after serving missions for The Church of Jesus Christ of Latter-day Saints.

“It’s cool because we’ve played AAU basketball since we were in seventh, eighth grade together,” Roberts said. “I remember playing against Bags and Anthony since we’ve been little kids, and then I moved (from Weber High School) and I go to Logan High School, and we have three good years together ... and kind of go separate ways, which is what happens with life. But we end up coming back ... and even though we’re not on the same team, we’re moving on to the next level and we’re going on to bigger things and better things, and it’s really exciting.”

Roberts and Bagley will be incoming freshmen at their respective programs, while McDade will be a sophomore. McDade played in 10 games and made four starters at NIACC this past season before back spasms set him back a month. When the son of Jackie and Omar McDade was healthy enough to play again, the Trojans “had their rotation set” and he felt it was in his best interest to transfer.

Nevertheless, the Logan native has fond memories of his time with the Trojans, who went 25-7, including 9-5 in conference play, during the 2019-20 campaign.

“It was good. I had a great opportunity,” McDade said. “I made a lot of great friendships and, I mean, we were ranked No. 1 in the country for JUCO D-II for about a month. I got to play with some amazing athletes that just made me better.”

McDade will now showcase his talents for the Gators, who went 15-14 this past season, including 7-7 in Northwest Athletic Conference (NWAC) action. The NWAC Tournament was canceled due to COVID-19.

“Basketball is my passion (and) this is just another avenue to create a better life for me by getting an education, and for my son,” said McDade, who is Logan High’s career assists leader (records have been kept since 1980) with 243. “And I’m extremely grateful for the opportunity to keep playing.”

Green River head coach Godfrey Drake is well known for recruiting athletes from Utah. Seven of the Gators’ players from their ’19-20 roster are from the Beehive State. Former Ridgeline High athlete Sam Weda played for Drake a couple of years ago.

“We (Sam and I) talked about the head coach, coach Drake, and how he’s a good guy and really just wants the best for his players,” said McDade, who was a two-time third-team all-state selection in high school. “And that didn’t have anything to do with me going there, but after I committed Sam told me a little bit about them, so that just kind of gave me a little reassurance that I made the right decision.”

The ultra-quick scorer and playmaker was a three-year starter for Logan High head coach Logan Brown, who he called “definitely one of my role models. McDade averaged 9.7 ppg, 2.4 apg and 0.9 spg as a sophomore, 14.5 ppg, 3.3 apg and 1.9 spg as a junior, and 13.9 ppg, 5.0 apg and 0.9 spg as a senior. McDade missed the first part of his senior season with an injury, but came on strong late in the season for the Grizzlies.

McDade is relishing the chance to play against Bagley, his friend and former Logan and AAU teammate. Bagley’s future team, Umpqua, also competes in the NWAC.

“I’m really looking forward to it,” said McDade, who wished to honor his friend, Florian Levry — “rest in peace, Florian” — who recently passed away. “I mean, we’ve played together since we were little and he’s helped me since he was younger, helped me grow. I’ve guarded him in practice and I’m sure the games will be a little different, but I’m excited and it’s going to be a fun, fun game.”

“Oh, I’m really looking forward to it because it will be the closest thing we can get to a high school rivalry game or the pickup games we’ve been playing this summer,” he said. “... It will be weird a little bit with Antho because we’ve been teammates for so many years, so it will be weird to play against each other, but I’m excited about it.”

The 6-1 guard completed his mission to South Africa in March and was recruited by several junior colleges, including, ironically enough, the schools his two former teammates chose.

Bagley is excited to play for a JUCO program rich in history. Umpqua went 25-4 this past season and won 13 of their 16 games in NWAC play. Of the 12 players on the Riverhawks’ roster during the ’19-20 campaign, five are from the Beehive State.

“It’s really exciting because one of the biggest things as I was going through the recruiting process that stood out to me was the winning culture of the program and the high level of scoring,” said Bagley, who will bring a non-stop motor to the Riverhawks. “They score 80 or 90 points a game and that’s something I love, I love a high-tempo offense and a guard-heavy offense, which is exactly what they (employ). And they take winning really seriously. ... We’re motivated to go back (this upcoming) season and win the conference.”

The Logan native was a shooting guard in high school, but expressed the desire to Umpqua head coach Daniel Leeworthy to be recruited as a point guard. Bagley made it a point to thank his parents and coaches Barry Ward, Jeff Brimhall, Jason Ward and Brown by name for helping him earn this opportunity.

“It means so much to me because I fell in love with the game of basketball a long time ago ... and so to be able to get an opportunity to not only get my education paid for, but to be able to compete again (is amazing),” said Bagley, who knocked down a memorable game-winning shot against Sky View as a junior. “I think that’s the biggest thing I’ve missed was just competing. I’m just super grateful for the coaches and everybody who helped get me these opportunities, that put me in good situations and taught me, whether it be on the court or off the court; they taught me things that will help me succeed hopefully at the next level.”

Like McDade and Bagley, Roberts really enjoyed his time playing for the Grizzlies and said it helped him prepare to compete at the collegiate level.

Roberts was recruited by a few Division II and JUCO programs, but really liked Snow College and the way the Badgers run their offense. Roberts already knows four of his future teammates, and that level of familiarity also made a difference in the recruiting process.

The Badgers went 18-14, including 8-4 in the Scenic West Athletic Conference, this past season. Snow College played a non-conference game against Green River, so there’s a chance Roberts could take the court against McDade, although 2020-21 schedules for both teams have yet to be released.

The gifted perimeter shooter is ecstatic about the opportunity to play for a traditionally solid junior college program.

“It means the world,” said Roberts, who completed his mission to Ecuador in April. “Since I’ve been a little kid, I’ve had one dream and that’s always been to be a college athlete, to play at a higher level after high school and represent a team and a university. And it means a lot, just because you work hard, you work your whole life to have opportunities like this, and not everyone gets a chance. And I was just blessed with the chance to come back from my mission and have a really good school recruit me and have a good scholarship offer ... and be able to go there and represent something that’s bigger than me.”