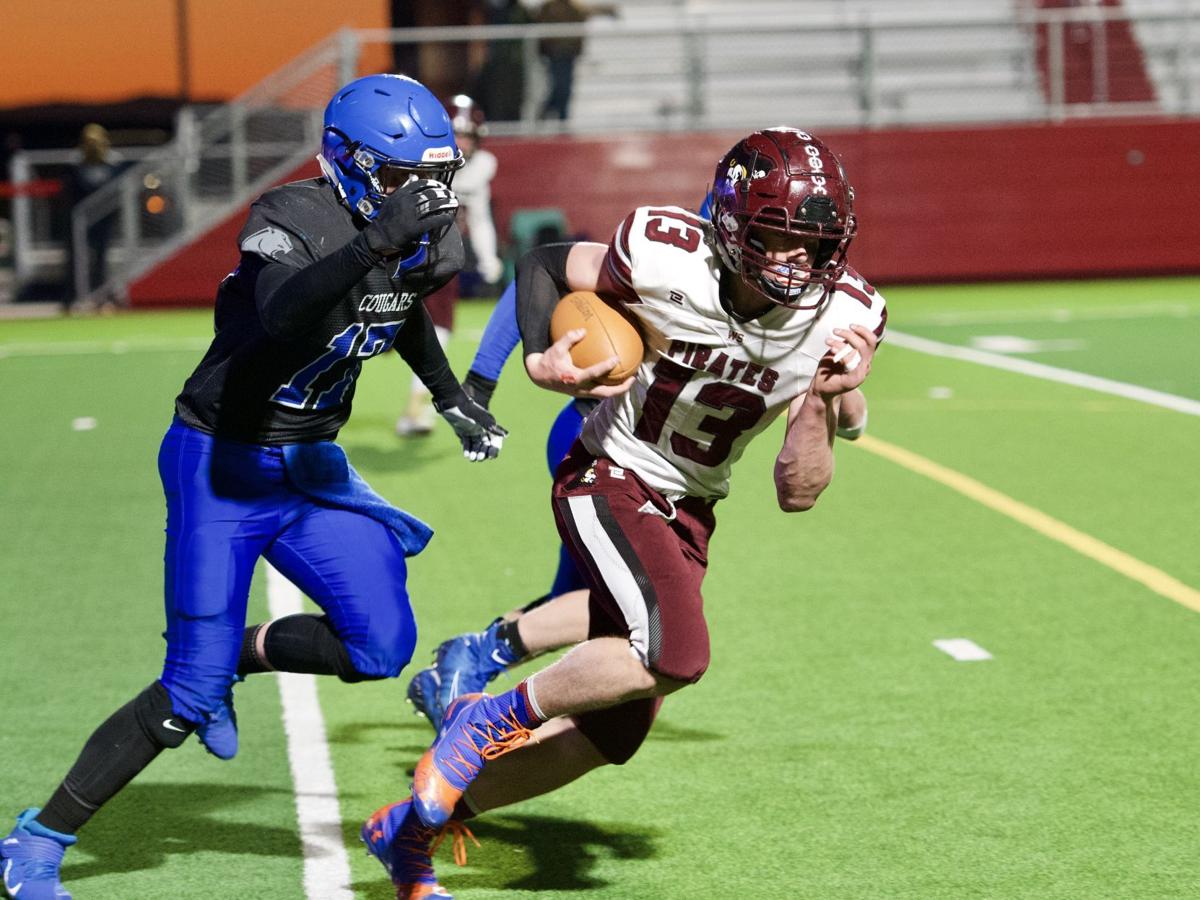 West Side linebacker Taze Stegelmeier runs down the field after intercepting a Firth pass during last Saturday's 2A state championship game. 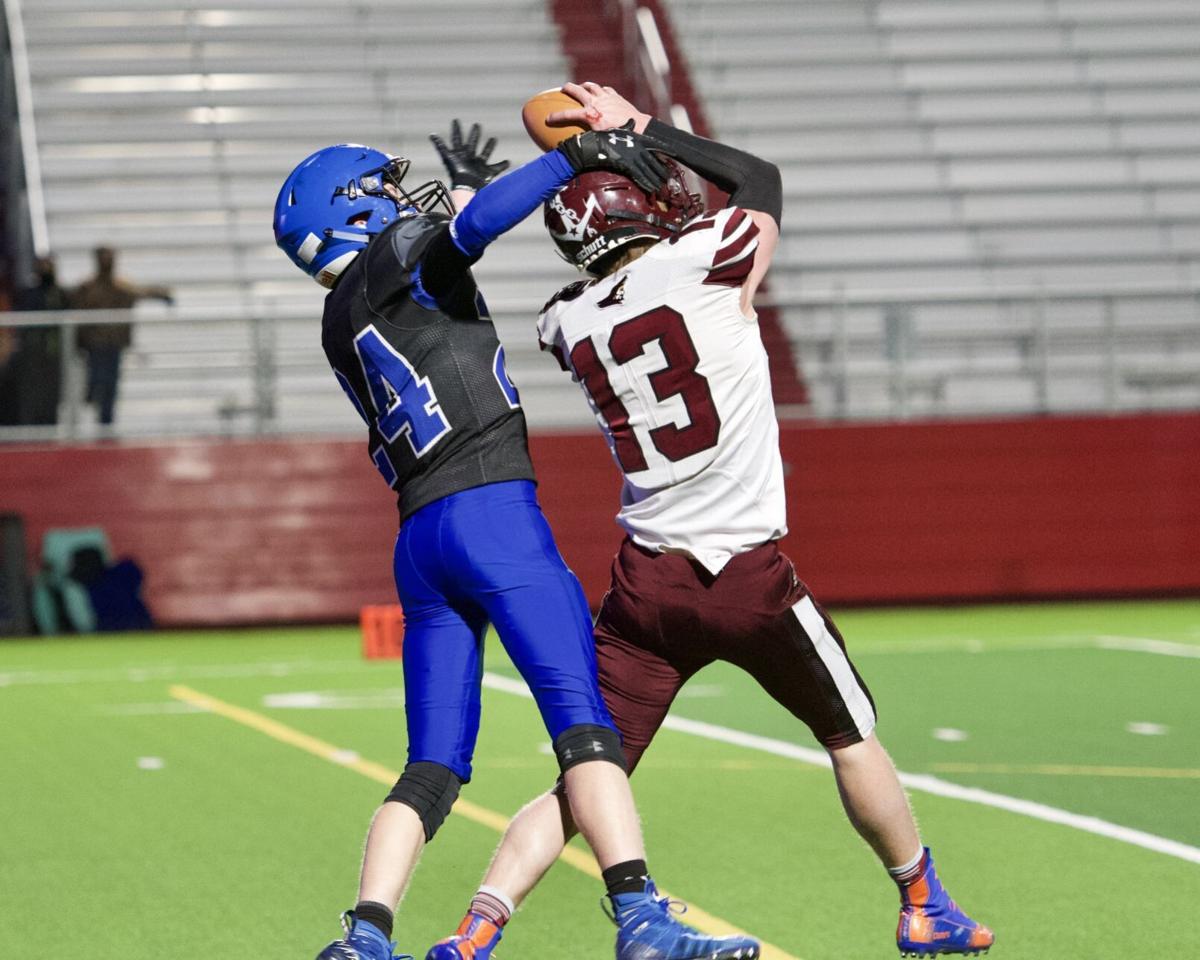 West Side linebacker Taze Stegelmeier runs down the field after intercepting a Firth pass during last Saturday's 2A state championship game.

REXBURG — Standing on the sidelines of West Side’s state-championship game win over Firth last Saturday, the most memorable play wasn’t a touchdown or a turnover, a great pass or a clever playcall.

It was a sound, the sharp pop of pads when Pirates linebacker Taze Stegelmeier ran through a Firth receiver on an attempted screen pass late in the second quarter, forcing an incompletion and a Cougars punt.

In the video of the play, focused first on Firth quarterback Gage Vazquez furiously backpedaling and then on the intended receiver, Stegelmeier appears like a flash, slicing through the screen to turn the unfulfilled hope of the ball floating through the air into pain for both the receiver and the Cougars’ offense.

The sound perfectly matches the hit, the suddenness of it echoing the violence of the collision.

“I saw it, recognized it, and I was like, ‘I got this, this one’s mine,’” Stegelmeier said about the hit.

In a championship game that had many potential narratives — the Pirates’ back-to-back titles, a West Side offense that couldn’t be stopped through the air — Stegelmeier and the West Side defense continually wrenched the attention back onto themselves with a dominant performance.

Firth gained just 140 yards as West Side recorded its sixth shutout in 11 games this season.

“Our defense is awesome,” West Side coach Tyson Moser said. “That’s got to be one of the more dominant defensive seasons a team has had.

At the center of that was Stegelmeier, who recorded two interceptions from his linebacker position in addition to the devastating hit — his first ended Firth’s best drive late in the third quarter, and his second ended the game with an exclamation point on the final play.

But despite how it looked at the end, for Stegelmeier — the best player on the best defense in 2A, the central figure on the unit that brought West Side its second title in two years and fourth since 2010 — 2020 was far from a cakewalk.

In fact, it was the hardest season of his career, as the linebacker had to fight through pain every week just to play.

North Fremont didn’t get a crack at West Side in the title game after being upset by Firth in the semifinals, but the Huskies made their mark on the Pirates’ season anyway.

In a summer scrimmage between the two, things turned chippy, and Stegelmeier took a late hit from a North Fremont player.

“Right when it happened, it was the worst pain I’d ever felt, and I was nervous that perhaps my football career was over. That’s how bad it hurt,” Stegelmeier said.

He had torn both rotator muscles in his hip. Initially, Stegelmeier and the West Side coaches thought he would potentially miss a good chunk of the season, and certainly wouldn’t be ready for the start of it.

But the doctors gave him a choice — he could, if he could manage it, play through the pain. Otherwise, only rest would get him back to 100 percent, and who knew how long that would take?

For a senior playing his last high school season, it wasn’t a choice at all.

“It’s my senior year, we’ve got a pandemic going on, I wanted to play as much football as I possibly could,” Stegelmeier said. “They said it’s going to hurt all season and I said, well, if I get to play football, that’s worth it.”

Stegelmeier didn’t quite have the season he had as a junior, when he made 181 tackles to set a new school record, but having him out there was key for the Pirates anyway. No. 13 also sparkled in West Side's other two playoff games as he racked up 19 tackles in the quarterfinals against Grangeville and 13 tackles, including three for a loss, in the semifinals against nemesis Declo.

Just to be able to play, he would go through a long stretching routine before taking the field every day. In blowouts, Moser would get him off the field as soon as possible.

But somehow, he managed it.

“You can see he limps everywhere he goes, so he’s playing on about a leg and a half, but he’s still a very good, dominant player, and I’m happy he was able to finish his senior year like this,” Moser said.

Instead of coming out early in Saturday’s championship game, as he’d done all season with a comfortable margin, Stegelmeier stayed in, sealing the win with his final interception.

And when the Pirates lined up to receive their trophy, he was the first one to it, raising it in both hands and giving it a kiss before joining his teammates around the championship banner.

After a season of fighting through it, the pain didn’t seem so bad anymore.

“I feel amazing,” Stegelmeier said. “I made it through the season, we won the game. With all the crap that went with it, it was an outstanding year.

“This is the greatest battle I’ve ever had to deal with, personally, and this just feels amazing. It hurts like heck every day, but I pushed through it and get to hold up a state championship trophy at the end of it.”