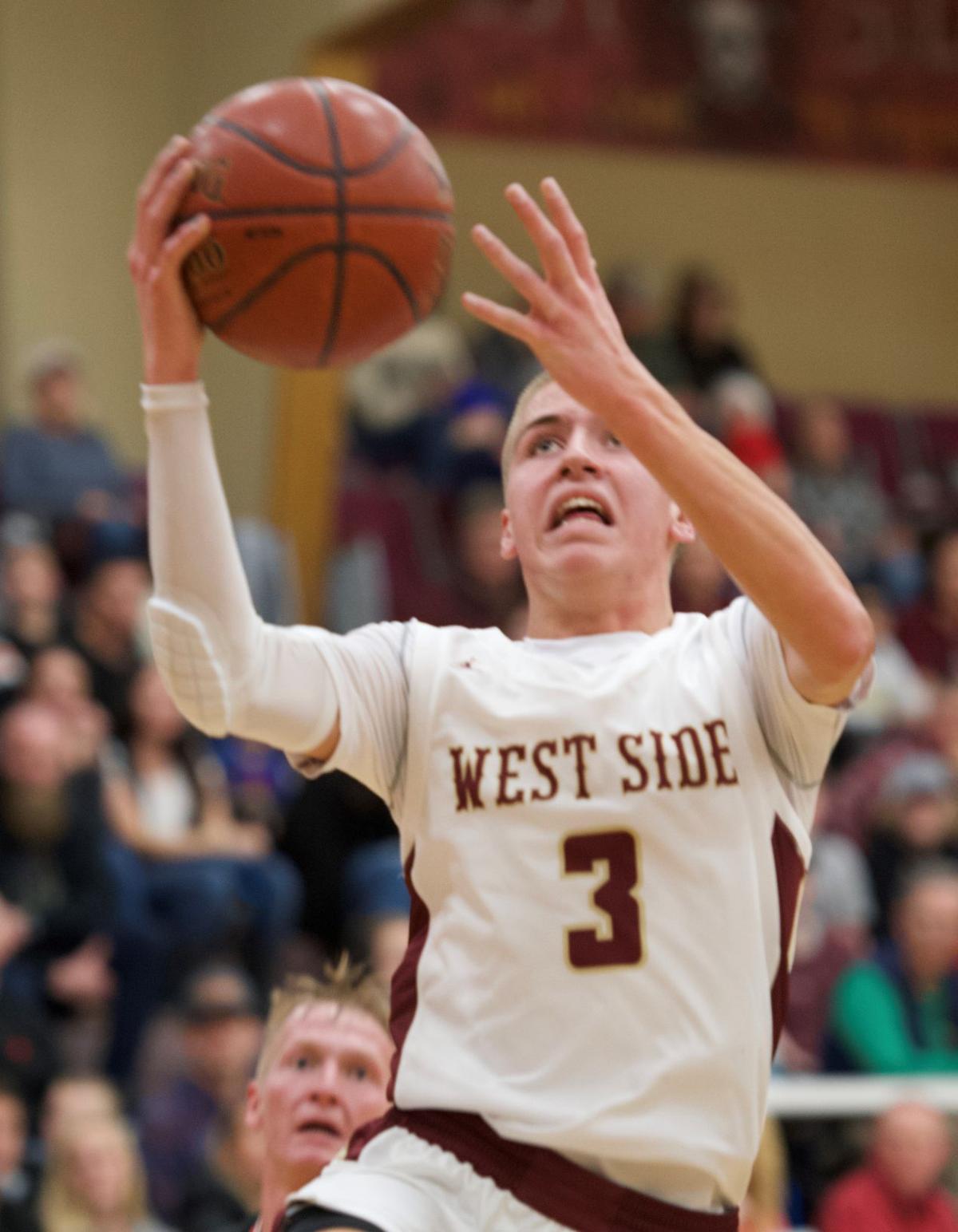 West Side guard Brentan Noreen drives to the basket for a layup in his team’s district tournament home game against Malad on Tuesday night in Dayton. 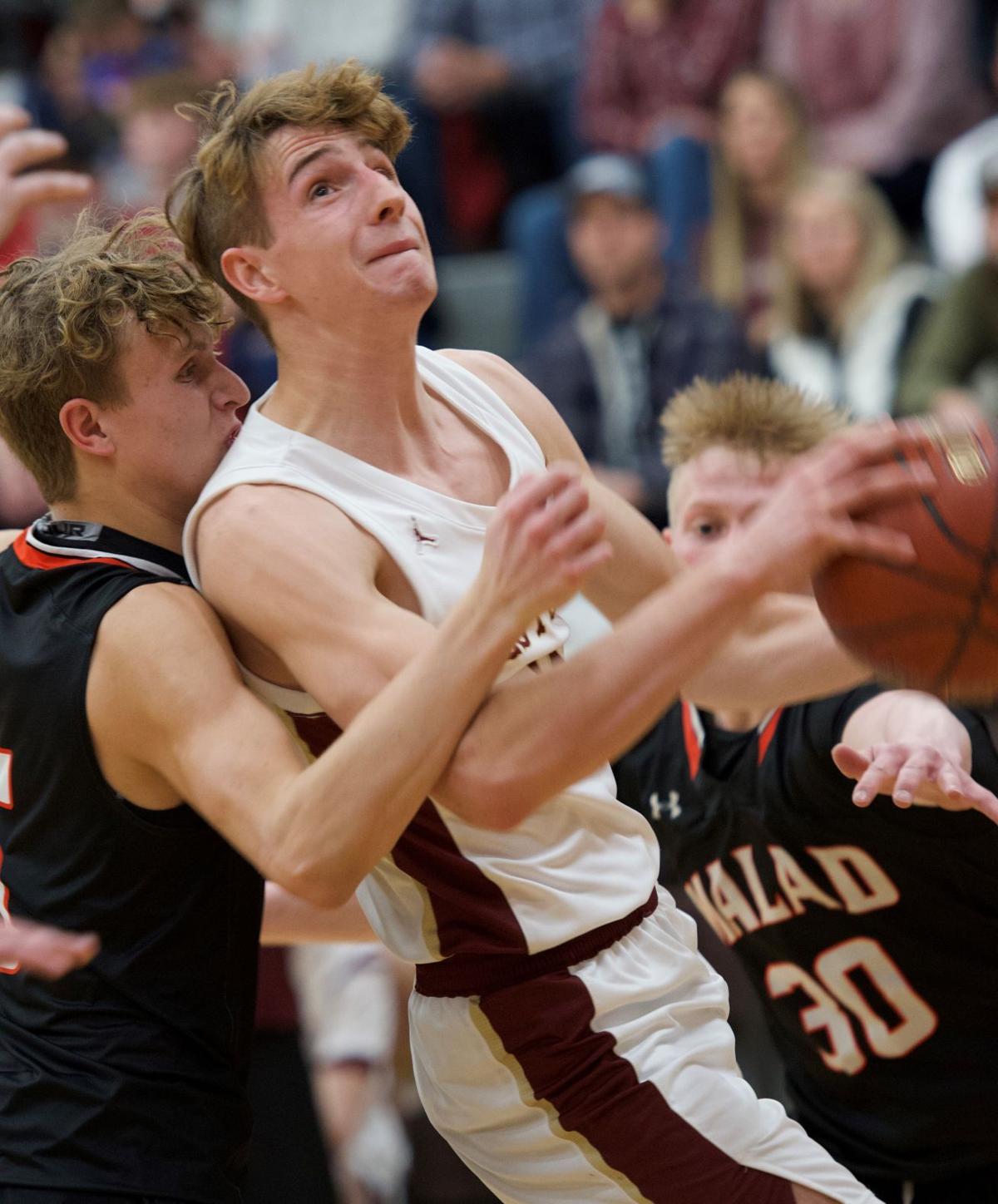 West Side forward Bryler Shurtliff scores in the paint while sandwiched between a pair of Malad players on Tuesday night in Dayton. 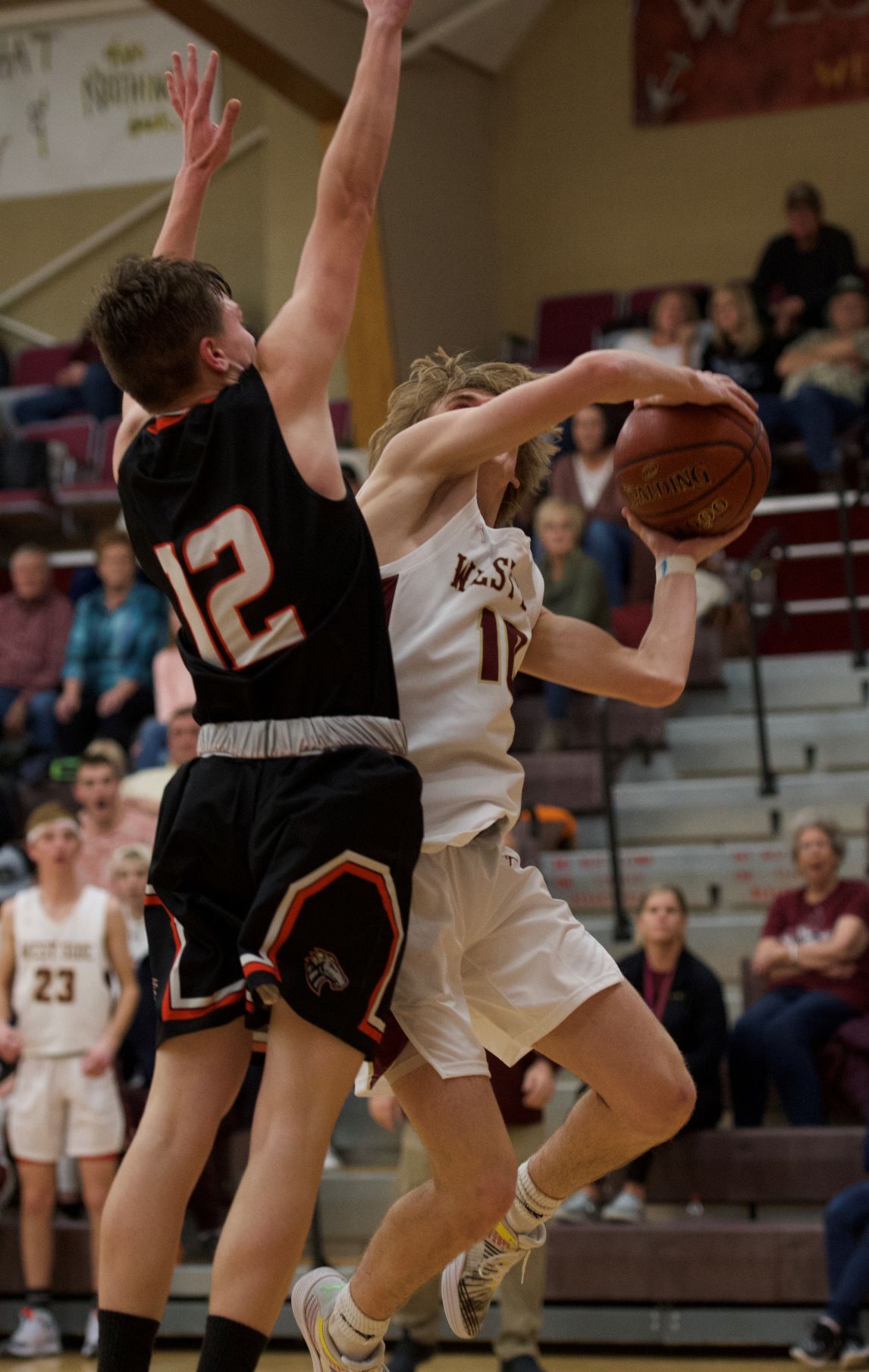 West Side guard Blaize Brown takes it to the basket while being guarded by Malad’s Chase Richardson on Tuesday night in Dayton.

West Side guard Brentan Noreen drives to the basket for a layup in his team’s district tournament home game against Malad on Tuesday night in Dayton.

West Side forward Bryler Shurtliff scores in the paint while sandwiched between a pair of Malad players on Tuesday night in Dayton.

West Side guard Blaize Brown takes it to the basket while being guarded by Malad’s Chase Richardson on Tuesday night in Dayton.

DAYTON — It wasn’t the start the Pirates were hoping for, but when they got punched in the mouth by a hungry Malad team, they responded in fine fashion.

Top-seeded West Side came storming back from a 10-point deficit by going on a 17-0 run spanning the second and third quarters on its way to a hard-fought 61-52 victory over fourth-seeded Malad in the 2A Fifth District Boys Basketball Tournament on Tuesday night at the E.L. Bud Elwell Sports Complex.

“I didn’t like our start, but we haven’t had a good start for a while now it seems like,” WS head coach Tyler Brown said. “It seems like it takes us a minute to get going, but give Malad credit. They did exactly what we wanted to do. We wanted to get a few layups coming out and we didn’t get them, and they got them. And plus Malad’s a pretty good team. ... So give them credit for coming ready to play. I’m just glad my team didn’t quit and they were resilient, and they got after (Malad) and finished at the end.”

The Dragons (8-13) gave the Pirates (18-4) some problems in both regular season games before eventually falling short, and that was again the case Tuesday. Malad went on a 12-2 run in the first quarter and extended its lead to 25-15 midway through the second quarter on a pair of Traven Ward free throws.

Malad drained a trio of 3-pointers during the first 12 minutes of action, but enjoyed most of its success offensively by burning West Side in transition. Of the Dragons’ first 10 buckets of the contest, five were easy layups.

“I think we just kind of came out a little overconfident,” WS senior point guard Brentan Noreen said. “We didn’t get back all the way (defensively in transition) and Malad showed up and they were ready to play. And then in the second half, we just made sure we got back and tried to push the ball ourselves.”

Indeed, the Pirates were undaunted by their early deficit and it showed late in the second quarter.

West Side scored 15 points during the final four minutes of the opening half and took a 29-28 lead into the locker room when Noreen pushed the ball quickly after a rebound and found star Bryler Shurtliff for a jumper just before the buzzer sounded. A 3-point play by Noreen also highlighted West Side’s 9-0 spurt to end the second quarter.

That momentum continued into the third quarter as the Pirates scored eight unanswered points and held the Dragons scoreless until the 2:50 mark of the quarter. Shurtliff exploded for 12 points during West Side’s aforementioned 17-0 surge and was the recipient of several accurate passes from his teammates.

In addition to Noreen, the Pirates got a nice boost from junior guard Parker Henderson, who scored seven of his nine points after halftime and made some big defensive plays, plus passed the ball well. Noreen finished with 11 points.

“That’s what Parker’s there for is to provide us energy,” Brown said. “You know, he gets in trouble a little bit with his dribbling, but all in all it pays off for us because he gets a lot more assists than turnovers. ... And plus he gets on the floor, he’s very scrappy and so forth, and Brentan’s the same way. And Brentan can jump well and he can do a lot of things for us, but he’s our point guard and he runs the show for us, and he can get to the basket when he wants it seems like. And he did a real good job for us too tonight.”

West Side led by 7-12 points most of the second half, but Malad did not go down without a fight. The Dragons got as close as 53-48 on a pair of Tom Simpson free throws with 1:39 remaining in the contest.

However, the Pirates bounced right back as the Dragons were whistled for goaltending on a well-executed inbound play to Shurtliff, who netted a game-high 27 points. West Side was also clutch from the free throw line as it went 12 of 13. Malad knocked down all 10 of its freebies.

Simpson netted a team-best 21 points for the Dragons, while Ward added 19. Simpson buried a few tough shots with Shurtliff in his face, and Ward crashed the offensive glass hard.

West Side blocked at least eight shots, the almost all of them were by Shurtliff or Ryan Lemmon.

Up next for West Side is a Thursday night showdown at home against second-seeded Bear Lake. The two rivals split their regular season series and the Bears are the only 2A team to defeat the Pirates during the 2020-21 campaign.

“It was a good game, but we’ve got to step it up,” Shurtliff said. “We’ve got to step up our defense and against a good team like Bear Lake ... we can’t get down (10) points in the first quarter. We’ve got to limit teams to one shot. We need to rebound better, but overall we came back in the second quarter, and the third and fourth quarters was our game.’