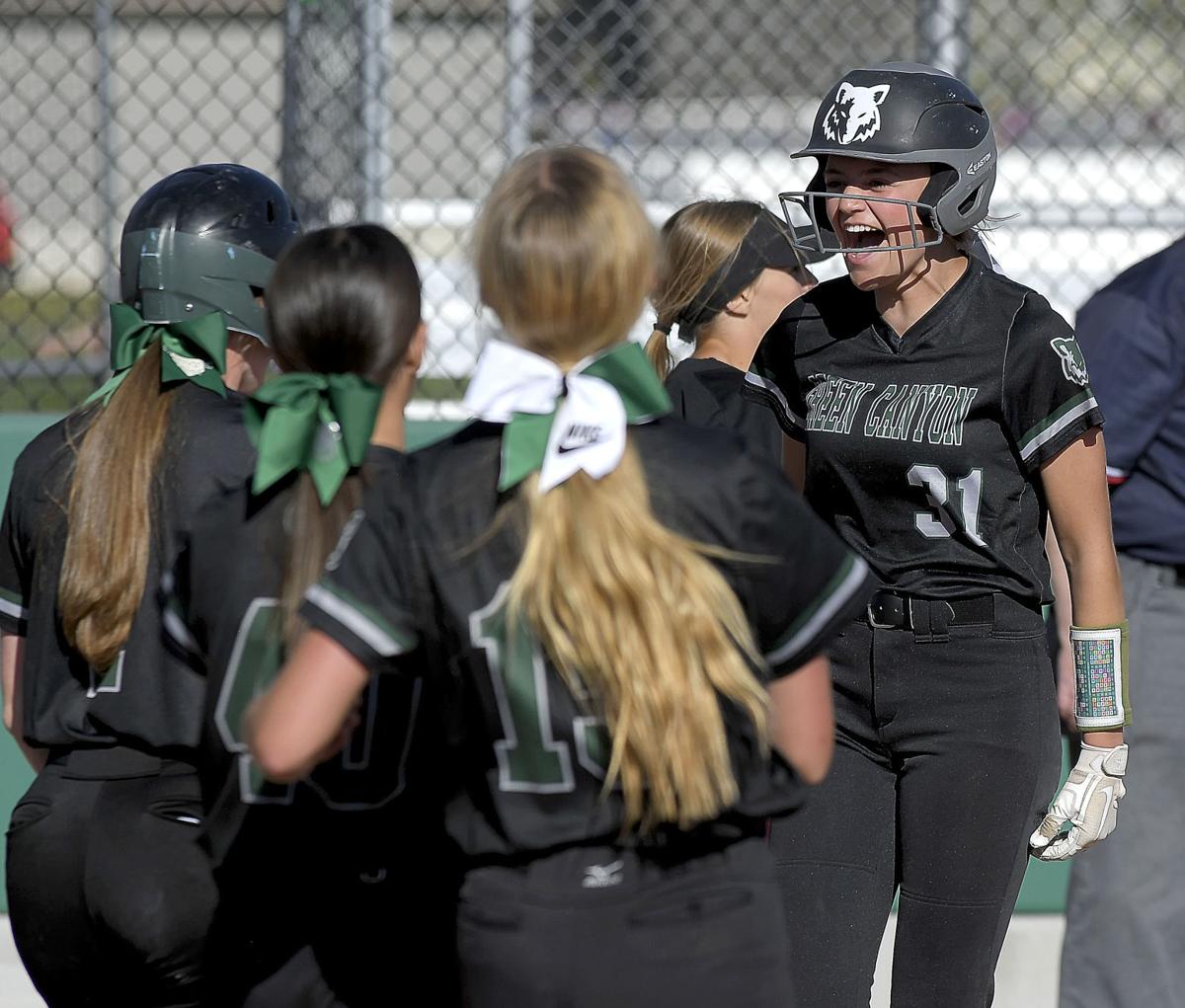 Green Canyon’s Kennedi Palmer (31) celebrates with teammates after they defeated Pine View, 12-2, in six innings on Tuesday in North Logan in the first round of the 4A state playoffs. 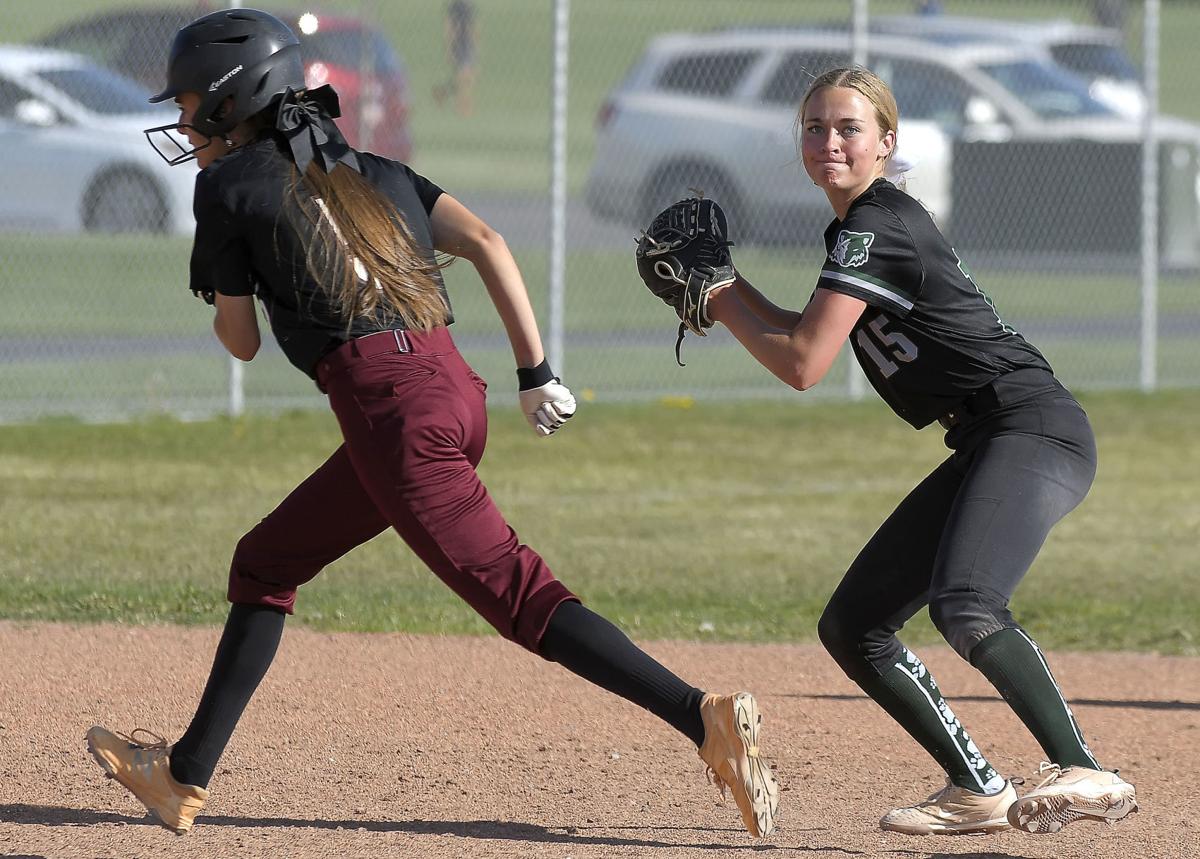 Green Canyon shortstop Madi Peterson throws the ball to first base as Pine View's Megan Benshoof runs past on Tuesday in North Logan.

Green Canyon’s Kennedi Palmer (31) celebrates with teammates after they defeated Pine View, 12-2, in six innings on Tuesday in North Logan in the first round of the 4A state playoffs.

Green Canyon shortstop Madi Peterson throws the ball to first base as Pine View's Megan Benshoof runs past on Tuesday in North Logan.

NORTH LOGAN — When eight different batters record a hit and seven of those score at least one run, that’s a pretty good sign things are going your way.

And they were for the Green Canyon softball team in the first round of the 4A Softball State Championships on Tuesday. The Wolves finished with 13 hits and held visiting Pine View to three while cruising to a 12-2 win in six innings.

“We spent a lot of time in practice yesterday hitting,” GC head coach Joe Astle said. “I think getting in those reps paid off. I’m proud of them for sticking with it and telling me what they needed to work on. It paid off.”

The Wolves (8-18) trailed early, but never panicked. As the game wore on, Green Canyon took advantage of some pressure situations, created scoring opportunities and then slammed the door shut with heated-up bats. Seven hits came in the sixth inning, as the Wolves plated six runs to end the game early.

“When we score some runs, it gets everyone excited and we are all cheering for each other,” said GC pitcher Rylee Ericson, who had two hits to help her cause in the circle. “It makes everyone feel good and then we are confident in ourselves. ... Everyone was doing really good.”

While the Wolves generated runs by drawing walks and taking advantage of five errors by the Panthers (4-19), Ericson was keeping the visitors off balance throughout the game. Pine View did not record a hit until the fifth with one out. The sophomore struck out four, walked four and hit one batter in six innings of work.

“My curve ball was doing pretty good, and my fastball was too,” Ericson said. “I like my curve ball a lot. It’s fun to pitch.”

The Wolves avoided allowing the Panthers to have a big inning. Pine View juiced the bags in the fifth with one out. Just one run came home thanks to a great throw by center fielder Abby Hansen to limit just one run on the second hit of the day by the Panthers.

A ground ball to Annika Eborn at third was fielded and smartly thrown home for the force for the second out. The final out came on a ground ball to second baseman Jentry Nava, who fielded it and threw to Kennedy Conan at first. The Panthers left the bags full.

“Rylee is tough, and we have all the confidence in her pitching,” Astle said. “She did a great job today.”

After the nice defensive effort in the fifth, the bats came alive for the hosts in their turn at the plate in the fifth. Ericson led off with a double, and Morgan Gittins drew a walk. They both would end of scoring on wild pitches. Madi Peterson reached on an error, was moved to third on a single by Kennadi Palmer and scored on a double steal to give the Wolves a 6-2 lead.

It was the third run Green Canyon plated off a double steal.

“I told them today we were going to get aggressive and run,” Astle said. “They ran and did it how they were supposed to. It paid off, which was good.”

Peterson made all three put outs in the sixth as the Panthers left two stranded in that frame.

In the bottom of the sixth, Green Canyon came out swinging. Nava began the inning with her second base knock of the game. Hansen followed by taking the first pitch she saw and depositing it over the right field fence for a two-run homer. It was the second dinger of the season for the sophomore.

“She (Hansen) killed that,” Ericson said. “We all knew she could.”

Five of the next six Wolves singled. Eborn had an RBI single, and Palmer brought in two runs with a single to center field. Palmer scored the final run to end the game when the Pine View catcher tried to pick her off at third and over throw. Palmer trotted home to score her third run of the game.

“I’ve told the girls it just takes one, and we had an inning where we busted out,” Astle said. “... Abby (Hansen) was struggling and she said to me, ‘I’m not doing my job.’ I told her I had every bit of faith and confidence in you and then she took one out of the ball park. That builds your confidence right back up.”

Pine View jumped out to a 1-0 lead after the first inning when a walk and an error allowed the visitors to get on the scoreboard first. Green Canyon had two errors in the game.

The Wolves brought two runs home in the second to take the lead and never gave it up. Peterson led off with a double to right field. Palmer reached on an error. Peterson scored on the first double steal of the game. Mcall Kaae reached base on a bunt single and Palmer would score on a double steal.

“I feel if we just play and don’t put pressure on ourselves, it helps a lot,” Ericson said. “Just go out there and have fun.”

Green Canyon made it 3-1 with a run in the fourth. Nava blooped in a single to score Palmer, who reached on a walk.

With the win, the Wolves now go on the road to face top-seeded Tooele for a three-game series, beginning Friday.

“We are just going to go leave it all on the field,” Astle said. “Before today I told them this could be your last game or you could play some more. Looks like we are playing some more. We’ve excited to move on and see what happens.”

“It’s nice to have some momentum from this game to help us win the next game,” Hansen said. “We have been playing a lot better than when we started.”

In the other three first-round games Tuesday, each ended early.

The Grizzlies (1-26) fell behind quickly against the Flyers (10-12) in St. George. Dixie plated nine runs in the first and eight more in the second. The hosts had 13 hits.

Logan scored a run in the second and another in third, but saw its season come to a close. The Grizzlies had three hits and committed three errors.

Pocatello had Preston’s number in both baseball and softball Tuesday in district tournament action. In baseball, the Gate City Indians beat the Tribe from Franklin County, 4-3. In softball, Pocatello rallied for three in the bottom of the seventh to squeak by 10-9.

Pocatello (13-11-2) built a 4-0 lead through four innings on the baseball diamond. It could have been worse, but Preston (11-15) turned a double play in the third inning.

Preston rallied in the fifth with two runs. With two outs, Tate Greene reached on an error and came home when Ashton Madsen had an inside-the-park home run. The southern Indians plated another run in the seven when Braden Hess singled and scored on a Pocatello error. Preston left two stranded in the seventh.

In softball, Pocatello (12-11) scored five times in the bottom of the first, but Preston (10-10) fought back and held a 6-5 lead through five innings. Pocatello plated two runs in the sixth to move back in front.

In the top of the seventh, Preston surged back in front with three runs. Charly Bair had an RBI single, and Shandee Parker brought in two runs with a single to put the visitors in front 9-7.

But it wasn’t enough as Pocatello also plated three runs in the bottom of the seventh to secure the win.

Each team had an error, while Preston outhit Pocatello, 10-9. Megan Johnson had four hits for the southern Indians as she was a double shy of the cycle. She hit a solo home run in the fifth, scored three runs and had two RBI. Parker had two hits. Kendall Keller took the loss in the circle as she struck out three, walked one and hit two batters.