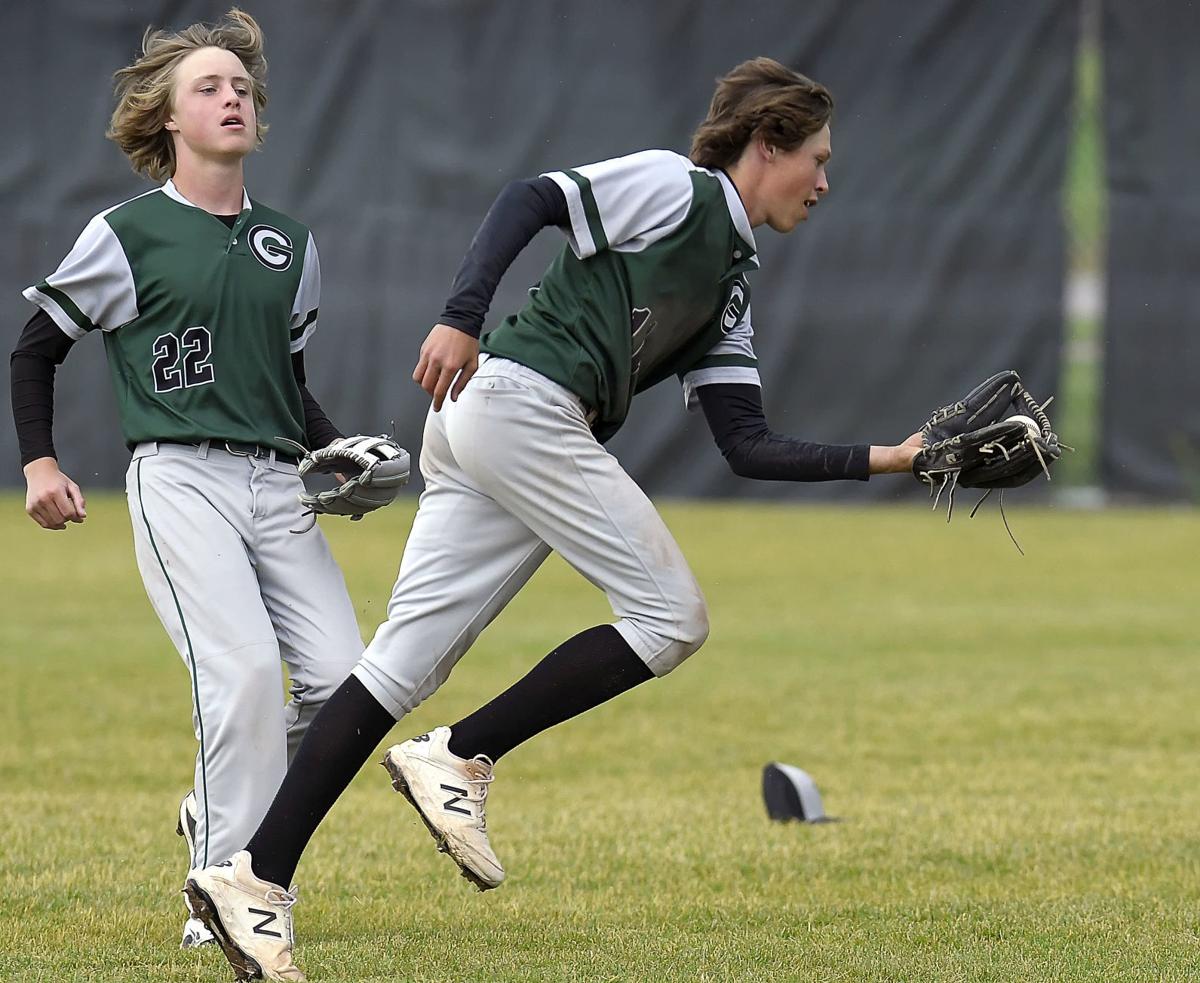 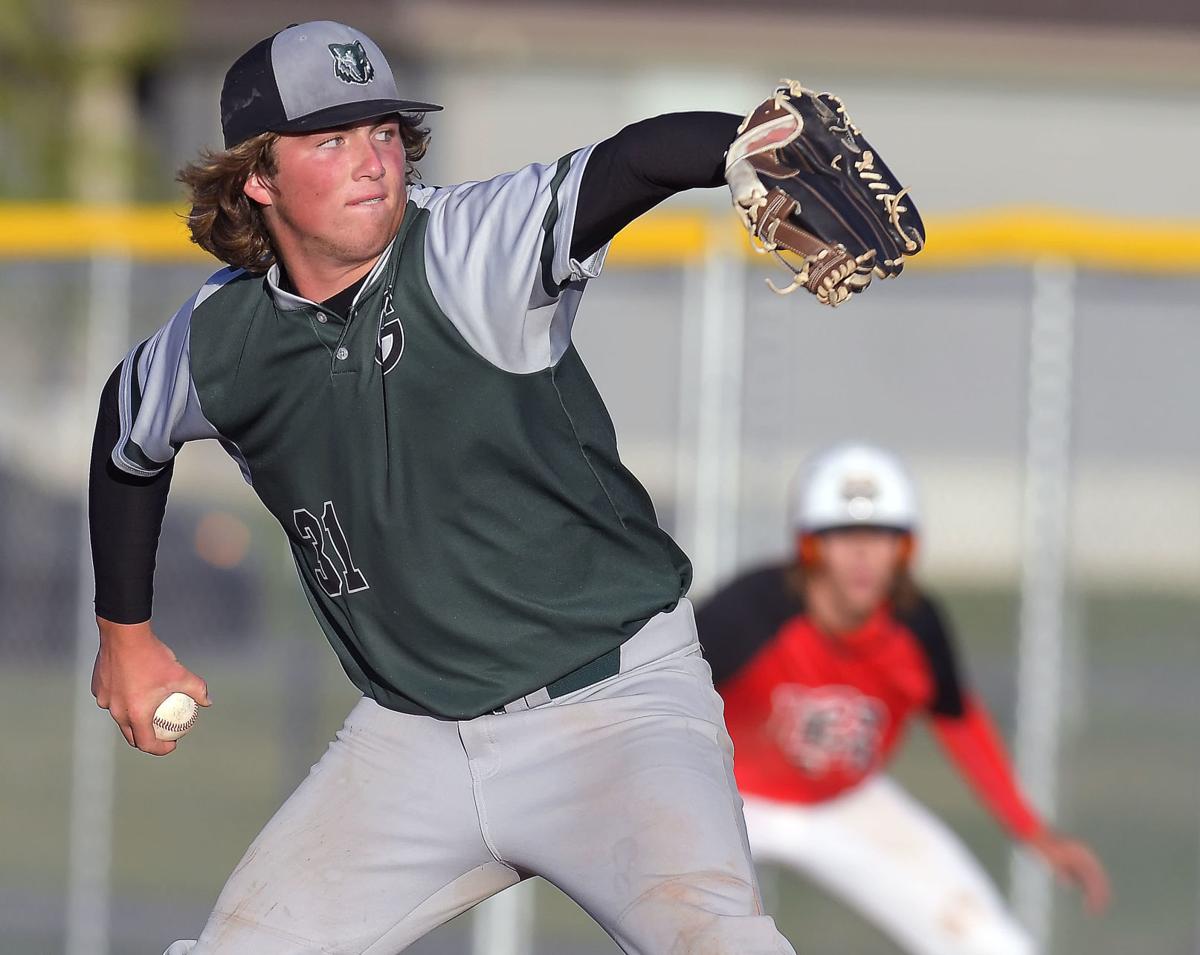 NORTH LOGAN — The coronavirus pandemic forced athletes like Green Canyon’s Tanner Watson to miss out on the lion’s share of his final prep baseball season.

Nevertheless, Watson was still able to have the kind of moment all seniors dream about — even if it was more than a month late.

Watson ripped a walk-off hit over the left fielder’s head in the bottom of the seventh, propelling Green Canyon to a thrilling 7-6 victory over Bear River in an American Legion game that concluded as the sun was setting on Tuesday night. Had the game lasted another five or so minutes, it surely would have been called due to darkness.

“It felt really good,” Watson said. “Just missing out on basically the whole season, you miss out on a lot of moments like that, so it’s fun to be out here having a good time and making good things happen for your team.”

Thanks to Watson’s heroics, the Wolves were able to win their second game in as many days. Green Canyon came storming back from a 3-0 deficit to dispatch of Box Elder, 8-3, Monday at home. That come-from-behind victory terminated a six-game losing streak for the Wolves.

“It felt really good because we’ve been in a little bit of a skid lately, so it was really important for us to get this win,” Watson said of Tuesday’s entertaining contest.

Green Canyon appeared to be in control after scoring six runs on four hits and three walks in the bottom of the second. The inning was highlighted by a bases-clearing single from Caleb Petersen — aided by a Bear River error — that gave the hosts a commanding 6-1 lead. Abe Olson and Ryker Ericson also came through with RBI singles in that inning for Green Canyon.

To their credit, the Bears were undaunted by their deficit. Instead, they closed the gap to 6-4 by stringing together four base knocks and plating three runs in the top of the fifth. Bear River then pulled even at 6-6 in the sixth frame when Ashton Harrow roped a two-run double to fence in left-center.

Harrow had a monster night at the plate for the Bears as he went 4 for 4 with a pair of two-baggers, three RBIs and one run.

The Wolves had a golden opportunity to retake the lead in the bottom of the fifth as Alex Atkinson laced a lead-off double to the fence in left, and then proceeded to steal third base. However, Bear River pitcher Derik Dean was able to retire the next three batters, and center fielder Hunter Harrow robbed Reece Hansen on what would have been the go-ahead hit.

Dean was superb in relief for the Bears as he replaced starting pitcher Caleb Barfuss, held the Wolves scoreless and limited them to three hits from the third through sixth inning. Dean has a side-arm delivery, which is rare at the high school level.

“It’s different,” GC lead-off hitter Alex Atkinson said. “The ball’s leaving you kind of when it’s going across the plate, so it’s awkward. You’ve just really got to focus on seeing it out of their hand. It’s kind of weird, but I thought we did all right hitting him.”

Watson certainly did a great job of locating one of the sidewinder’s pitches in the seventh inning. In his first at-bat against Dean, the recent Green Canyon graduate sliced a harmless fly ball to the Bear River first baseman.

“My first at-bat I was still a little thrown off with the arm slot he was coming from, and so my second at-bat I was just focusing on only hitting my pitch,” Watson said. “And I saw it and I hit it, and it felt great.”

And while Watson came through with the clutch hit, a few other Green Canyon players had solid performances at the plate. For starters, Atkinson has been a tough out all summer long, and he reached base safely without grounding or flying out in all four of his at-bats Tuesday.

“It’s been awesome,” Atkinson said. “It’s been a big confidence builder (for me). Just good opportunities to play some baseball.”

Petersen pitched the first six innings for the Wolves and made an outstanding defensive play in the top of the third to deny Hunter Smoot of a hit. No. 31 scattered nine base knocks, struck out six and issued four free passes.

Rhett Christensen went 3 for 4 with two runs and one RBI for the Bears.

Tuesday’s showdown started more than an hour later due to a lightning delay that held up the A (JV) contest between the two legion programs.

Dax Roundy was plunked with the bases loaded, allowing Blacksmith Fork to score the winning run in the top of the ninth against Box Elder, which rallied from a 4-0 deficit after two innings.

Deeter went 3 for 4 with two runs and a walk for Mountain Crest’s legion program, and it was the lead-off batter who plated the winning run. Koleman Foulger singled twice, drove in three runs and scored another for the Trappers, while Lance Welch chipped in with two hits and a RBI.

Ridgeline put a four-spot on the scoreboard in the top of the third and never looked back against Logan, which plated its lone run in the fourth.

Bean Jones singled twice and drove in a run for the Mavericks, who got two runs, one hit and a walk from Marshall Hansen and a double from Carter Gill.

It was another dominant pitching performance from Jaden Harris, who held the Grizzlies to three hits — all singles — in his six innings on the mound. Harris struck out 13, walked four and plunked one.

Ethan Wilson scored for Logan (10-4) on a single by Nic Egbert. The Grizzlies’ had their eight-game winning streak come to an end.

A pair of doubleheaders took place Wednesday, plus Logan squared off against Bear River. That game and the nightcaps of both twinbills were still going on when The Herald Journal went to print.

Blacksmith Fork defeated North Cache 6-1 in Game 1 of their DH, while Green Canyon increased its winning streak to three by prevailing against Ridgeline, 9-3, in their opener.

The Trappers (10-9) scored twice in the first and second innings to take control against Sky View’s legion program. The Titans (4-10) plated their lone run in the top of the seventh on a Taydem Neal grounder.

Koleman Foulger led the charge offensively for Blacksmith Fork as he tripled, singled, drove in two runs and scored two more. Caden Jones contributed with a pair of runs and RBIs for the Trappers, while Preston Jones added two hits and one run.

Lance Welch shined on the mound for the Trappers and also smacked a RBI double. Welch pitched the full seven frames, only gave up three singles, fanned 12 and didn’t walk or plunk anyone.

Meanwhile, Green Canyon (7-7) surged its way to a 8-0 lead against Ridgeline, which didn’t score until the seventh inning. The Wolves pushed across five runs in the bottom of the fourth.

The Wolves got doubles from Bouck, Ericson and Olson, and a pair of runs from Atkinson, Berry and Will Egan. Seven different players accounted for all seven of Green Canyon’s hits.

Carter Gill doubled twice, drove in a run and scored run for the Mavericks (8-8), who struggled defensively as they gave up seven unearned runs. Jaden Harris chipped in with two base knocks and one RBI.