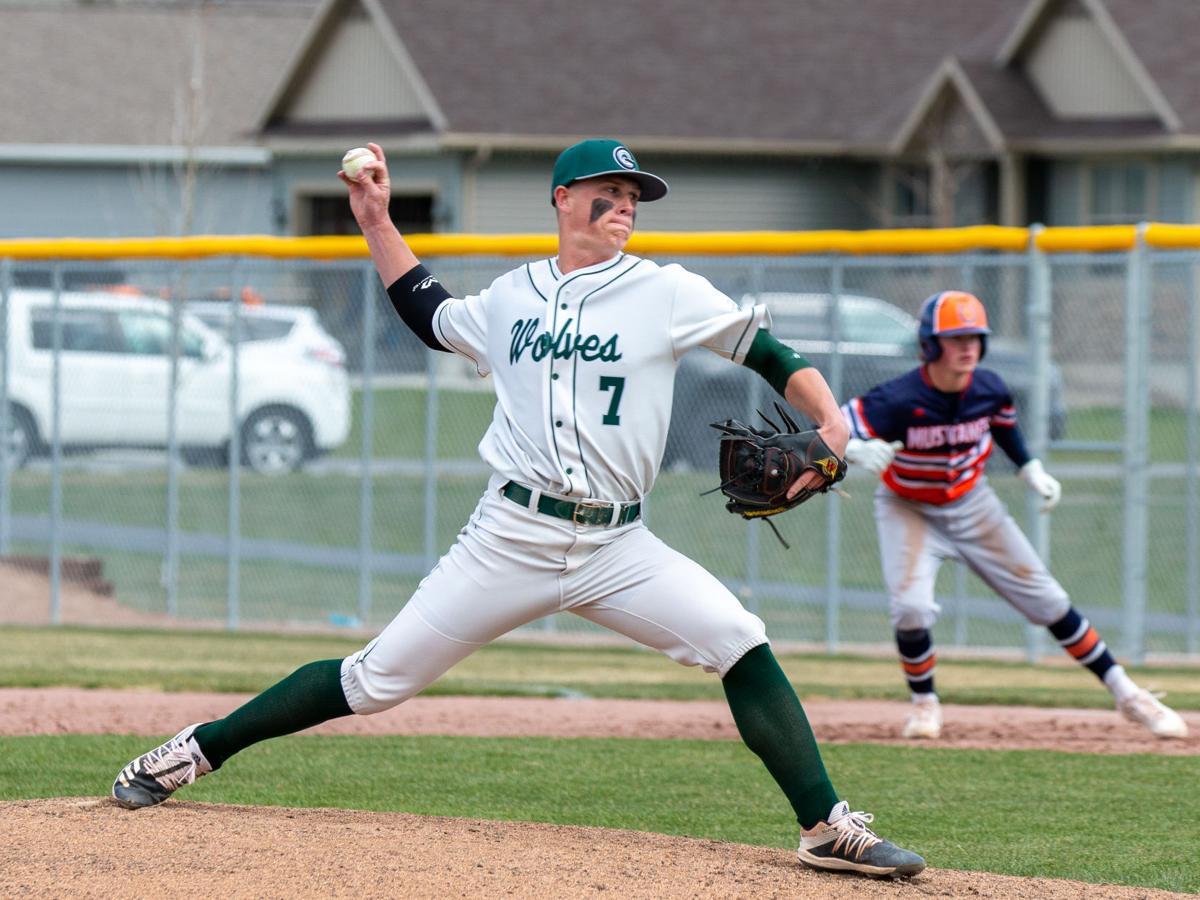 Green Canyon pitcher Reece Hansen delivers against Mountain Crest on Friday in North Logan. Hansen only allowed one run in a complete-game effort. 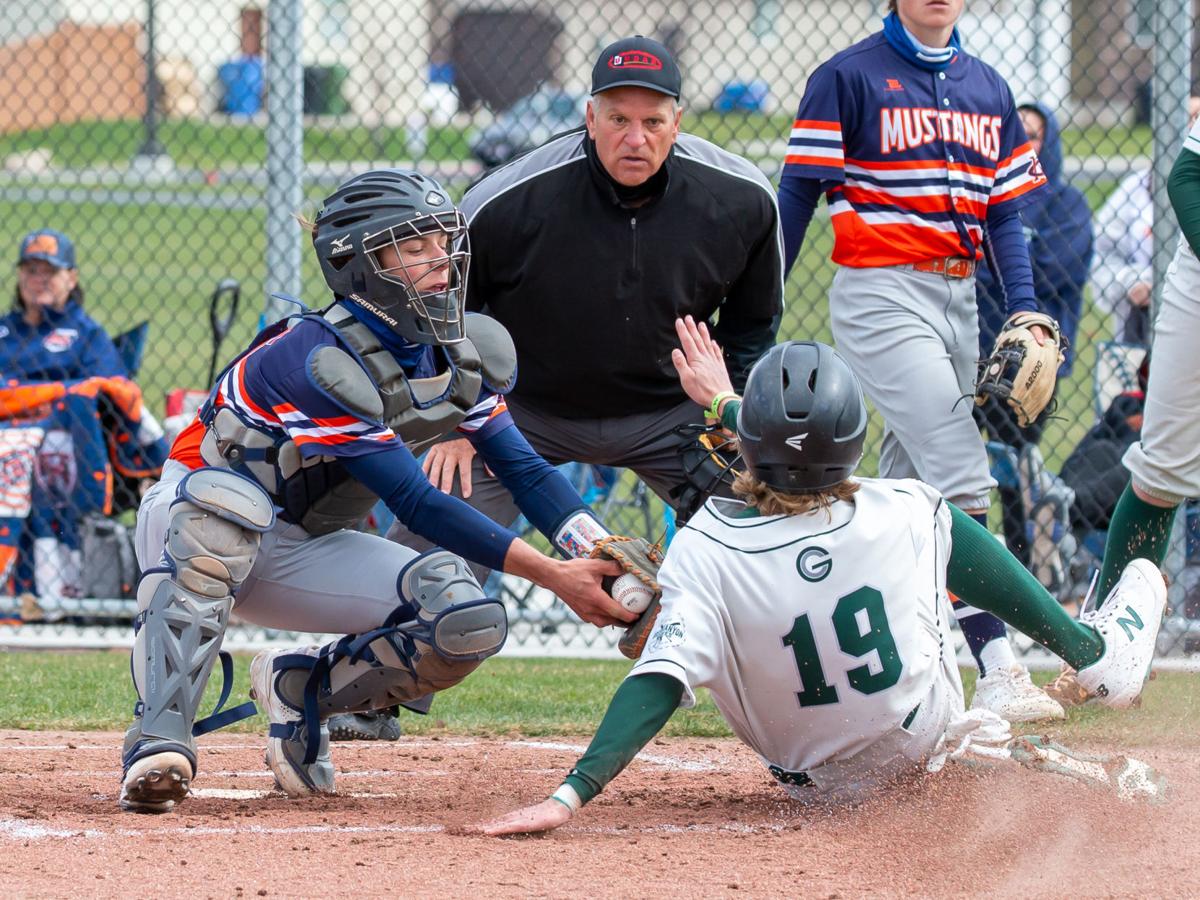 Green Canyon pitcher Reece Hansen delivers against Mountain Crest on Friday in North Logan. Hansen only allowed one run in a complete-game effort.

The senior paid attention to detail and had a positive attitude throughout against region-leading Mountain Crest on the baseball diamond. Hansen was in a groove on the mound and it carried over to his Green Canyon teammates.

The Wolves handed the Mustangs their first Region 11 loss of the season, 5-1. Mountain Crest had won seven in a row before Friday’s setback.

“Mountain Crest is such a great program,” GC head coach Ryan Eborn said. “Steve Hansen does incredible things with that program. Any time you play Mountain Crest, it’s a huge game. This year we feel we can compete. ... This is a giant win for us. This is a turning point game for us.”

Following a complete-game effort, Hansen did what he always does after a game — ran “poles” That’s right. The pitcher wasn’t celebrating or eating treats, but out running from one foul pole to the other and back.

“How ever many innings you pitch is how many poles you have to run,” Hansen said. “So, since I pitched seven, I had to run seven poles.”

Hansen set the tone for the Wolves (12-4, 4-2 region) by striking out the side in the top of the first inning. He needed just 10 pitches to get out of the frame, and both he and his coach felt that all 10 pitches were strikes.

“From the first inning, I just felt like I was in control the whole time,” Hansen said. “After striking out the first three batters, I felt in total control. I was feeling all of the pitches.”

“Reece is special,” Eborn said. “He is a great athlete. He is a bulldog. He came through for us today. We needed a bulldog today. I couldn’t be more proud.”

“We faced a good pitcher,” MC head coach Stephen Hansen said. “At times we hit the ball hard, but they (Wolves) made some good plays. And we gave up some runs we shouldn’t have gave up. We usually get those outs and picked a bad time to have those errors. That’s the game of baseball. We will bounce back.”

Green Canyon did not commit an error and took advantage of extra outs. The Wolves may have even won by more as they stranded nine base runners in the game.

“Leaving guys on base has been an issue for a while,” Eborn said. “We have left a lot of runs out there, but we also came up with runs, taking advantage of some things. But, we need to make it less stressful and score more.”

Caleb Petersen and Miles Matthews led a six-hit effort by Green Canyon with two base knocks each. Matthews had two RBIs, while Nick Bouck scored twice.

Five different Mustangs record a hit as Braydon Schiess and Caden Jones had doubles. Andrew Nielsen went the first three innings on the mound, with Jaden Jones coming in to finish the game.

“We just couldn’t string our hits together except for the one inning,” coach Hansen said. “... You are not going to go undefeated in baseball. We just move on to the next series. We won two games this week and won the series. That’s what we are after.”

Petersen began the bottom of the second with a double to right field that drifted near the line. The next two Wolves reached base on errors, and Petersen scored between them. A walk then juiced the bags with not outs.

The Mustangs got a fielder’s choice groundball to dodge a bullet as the runner at home was thrown out. But the next groundball was too deep to go home, and Bouck scored.

When the dust settled, the hosts held a 2-0 lead, but had left the bases loaded.

After Hansen faced just three MC batters in the top of the third, the Wolves were back at it in their half of the frame. Hansen helped his cause with a lead-off single to center field. He would score on another throwing error by the Mustangs on a bunt. The hosts would get one more run with a RBI single by Matthews to take a 4-0 lead through three.

“We need to stay mentally strong,” coach Hansen said. “We will get it.”

With two outs in the fourth, Lance Welch broke up the no-hit bid by Hansen with a single to center field. He moved to second on a single by Dax Roundy and scored when Schiess laced a double down the right field line. The rally came to a halt when Wolves third baseman Bouck made a nice stop and throw for the final out.

“It’s always helpful to have a solid defense,” Hansen said. “It really boosts my confidence.”

Another error by the Mustangs helped the Wolves push across the last run in the bottom of the fifth. Caden Stuart drew a walk and eventually scored on a bases-loaded sacrifice fly by Alex Atkinson.

Hansen sat Mountain Crest down in order in the sixth and gave up one hit in the seventh before two groundouts ended the contest.

“This was good because we did not want to get swept by them, especially on our home field,” Hansen said. “I told the guys before the game, ‘we are not getting swept on our own field.’ We took it to them. ... Our goal now is to go win every series.”

In other region action Friday, Ridgeline completed the sweep of Logan to move into a tie for first with Mountain Crest, setting up a big series next week with the Mustangs. The Riverhawks won, 9-7. Bear River blanked Sky View in five innings, 10-0. Preston spilt a twinbill at Shelley, winning the first game 8-2 and dropping the second 9-2.

At Millville, Ridgeline (10-5, 5-1) built a 5-0 lead through two innings, only to find itself trailing 7-5 midway through the sixth. However, the Riverhawks plated four runs in the bottom of the sixth, which proved to be enough.

Evan Webb led the Riverhawks with three hits, including a double, while Carter Gill and Marshall Hansen each had two base knocks. Branson Jones pitched the final one and a third innings to get the win.

Kody Kirk, Alex Davies and Jack Fjeldsted each had two hits for the Grizzlies (2-13, 0-6).

Bear River’s Ashton Harrow threw no-hitter, while striking out two and not issuing a walk. The Bears had two errors.

At Shelley, Preston (8-7) scored runs in four innings, including plating four in the seventh to take the first game. The Indians overcame five errors. Ashton Madsen had two of the team’s seven hits, as well as having two RBIs and a double. Justin Inglet scored three times. Tate Greene went the distance on the mound, striking out six and walking one.

In the nightcap, errors, walks and hit batsmen caught up to Preston. The Indians had eight errors, walked five Russet batters and hit another five as they used three pitchers. Preston outhit Shelley, 7-5, but all the other miscues proved costly. Emery Thorson had two hits for Preston.