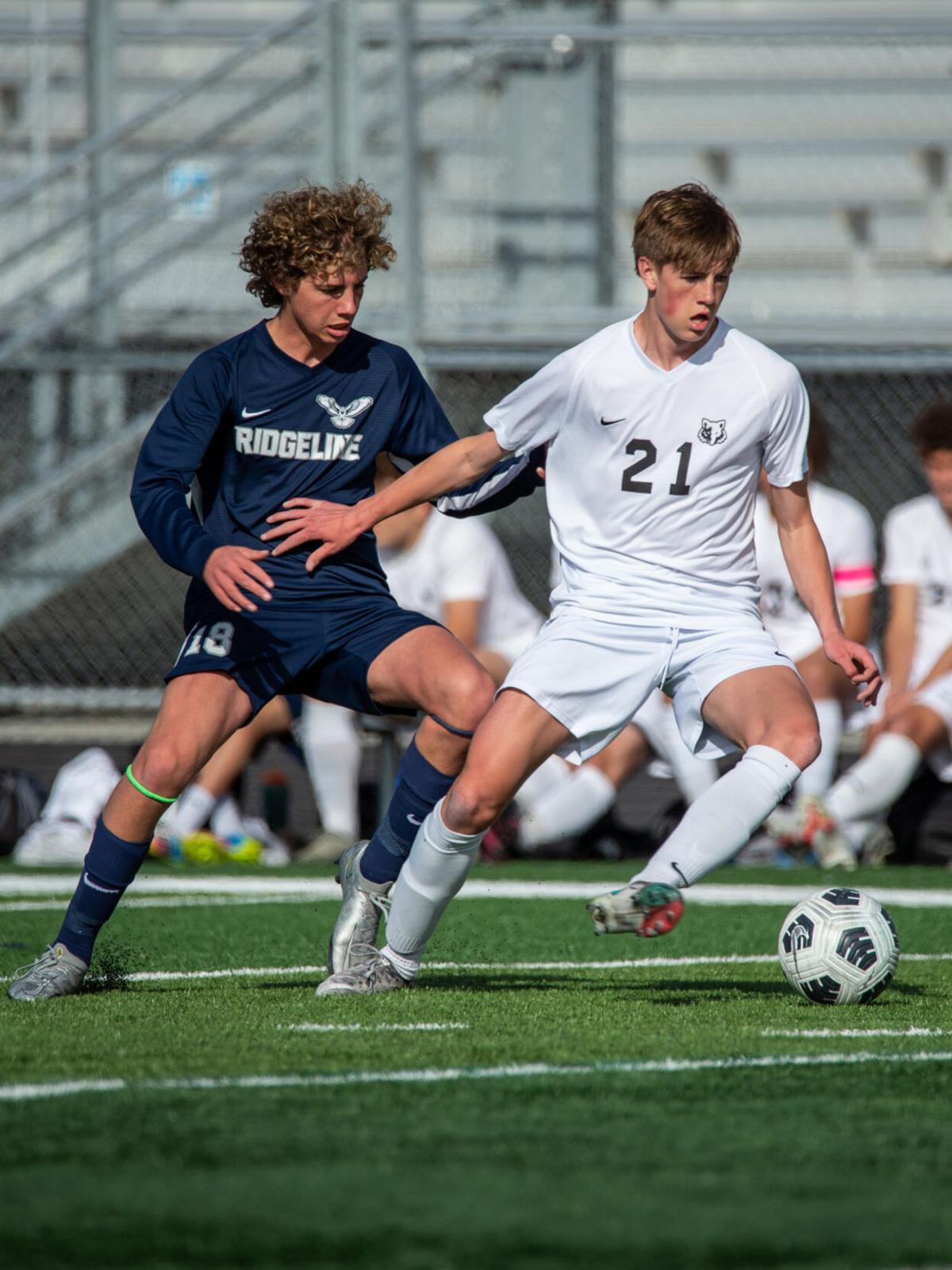 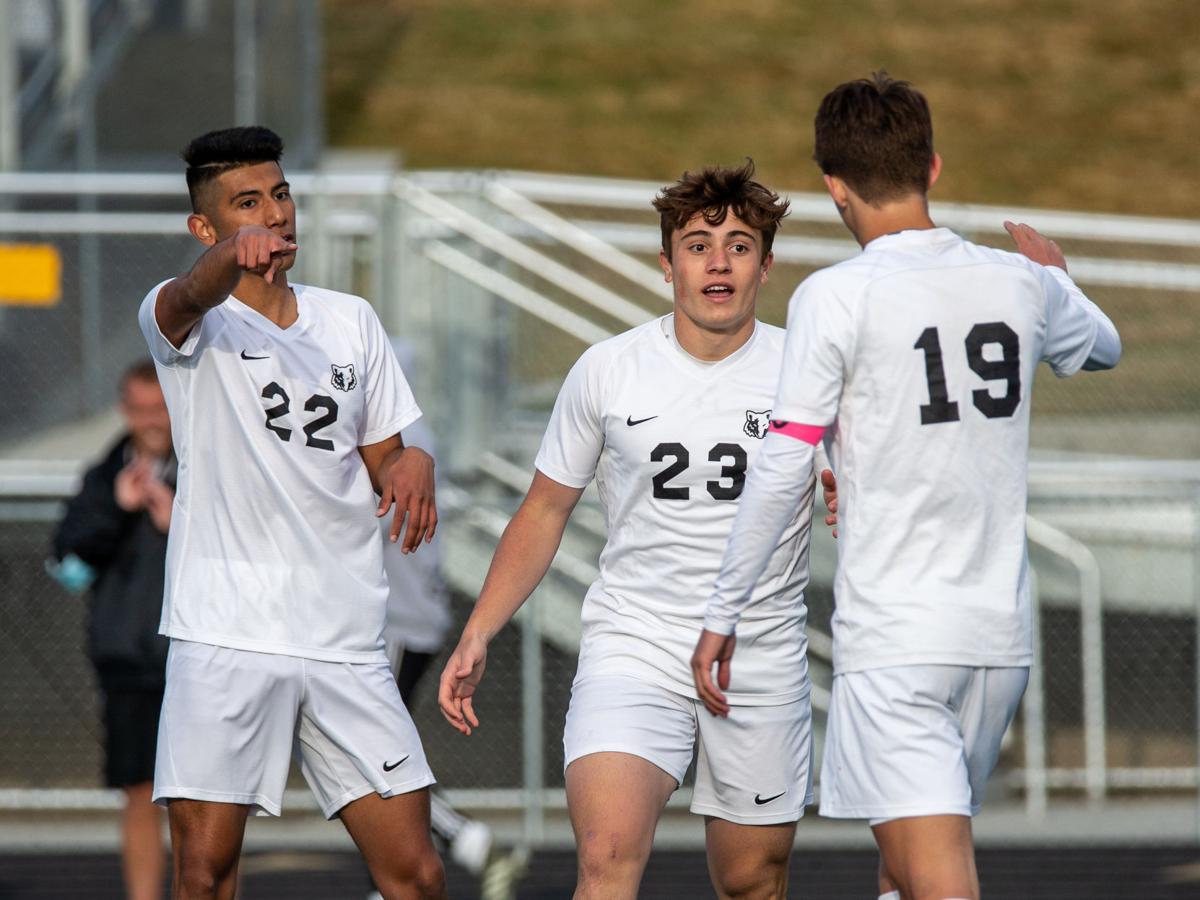 Green Canyon's Ethan Cox (23) celebrates with teammates Diego Ornelas (22) and Porter Cragun after scoring in the second half against Ridgeline Wednesday. 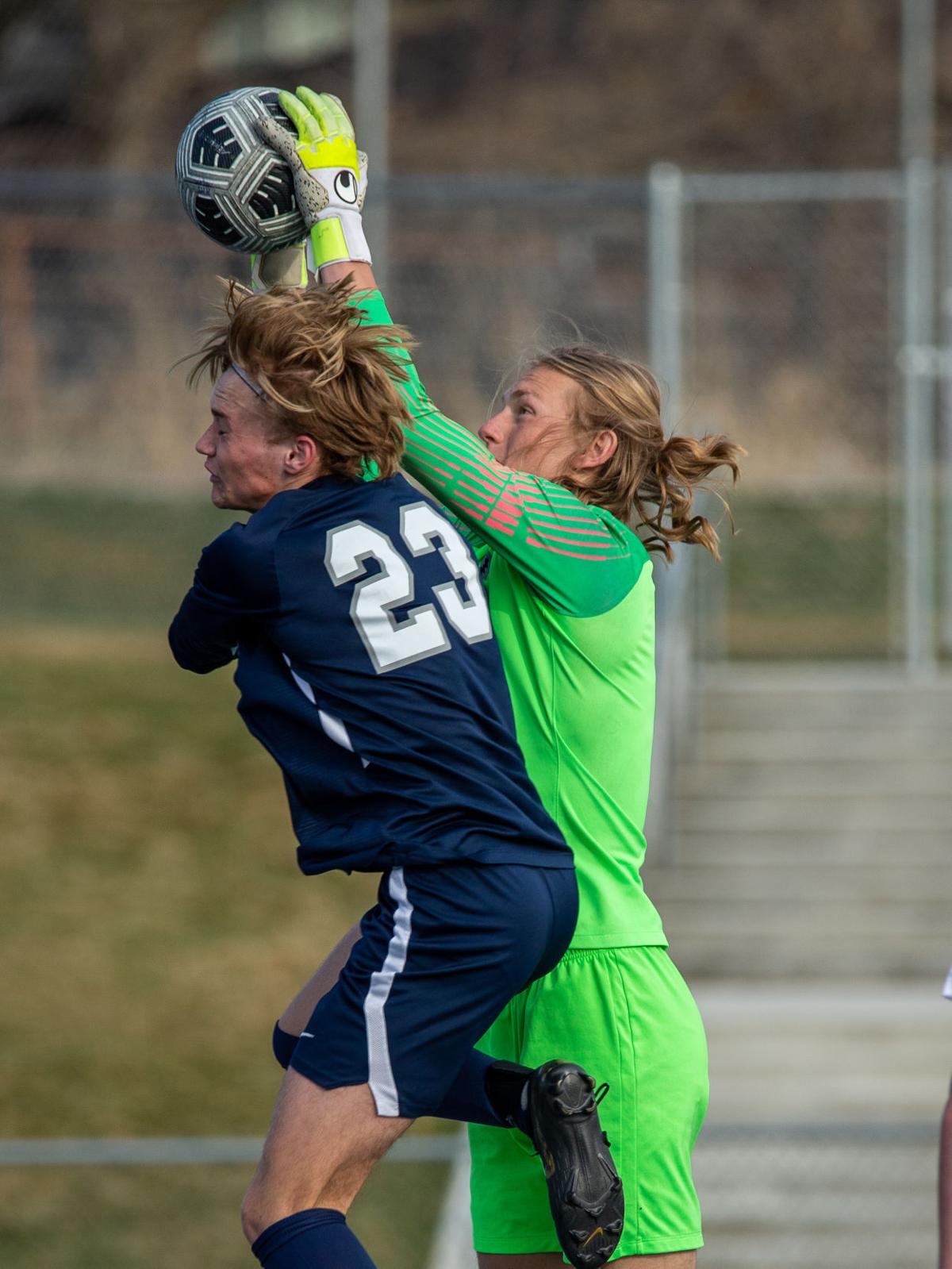 Green Canyon's Ethan Cox (23) celebrates with teammates Diego Ornelas (22) and Porter Cragun after scoring in the second half against Ridgeline Wednesday.

MILLVILLE — To the delight of head coach Sven Rasmussen, his Wolves did not suffer a letdown following last Friday’s big 3-2 victory over Mountain Crest.

Instead, Green Canyon was crisp in possession from the get-go and put together a complete performance en route to a 2-0 victory over Ridgeline in a Region 11 boys soccer match on a breezy Wednesday evening.

“You know, there’s a really good vibe with our team,” Rasmussen said. “There’s always things we can work on to improve and we’re always trying to better ourselves. (But) there’s something special happening here, and the guys are singing on the bus. That’s always a sign of a good thing for me. It’s a super fun group and I think we’re all committed to something, and special things happen when you’ve got the chemistry and the talent and the commitment.”

The Wolves (8-2, 3-1 region) asserted themselves from the opening whistle of the match and had a couple of good scoring chances in the early going, including a shot by Porter Cragun that required a diving save by Ridgeline goalkeeper Riley Garvert.

Nevertheless, it was the Riverhawks (5-5, 2-2) who came the closest to denting the scoreboard first. Some good build-up led to a well-weighted pass from Garrett Jenkins to Tate Godfrey. Green Canyon keeper Jake Von Nedierhausern made a big reaction save on Godfrey’s shot, and GC defender Nikk Perkes was there to clear the rebound off the goal mouth just in time in the 15th minute. Perkes made another heads-up defensive play after halftime.

Diego Ornelas forced Garvert into a tricky save at the near post later in the half, but the Wolves would not be denied on their next dangerous opportunity. A sublime backheel through ball by Angel Torres found the feet of Baldo Chavez, and Chavez slotted his shot just inside the far post with 5:30 remaining in the half.

“The precision was really good,” Torres said of that sequence. “Baldo is really fast, one of the fastest players I’ve ever played with. And I just gave him the pass and he finished it. It felt really good.”

Green Canyon’s momentum continued into the second half as it fired off the first seven shots of the stanza. The Wolves outshot the Riverhawks 22-9 and finished with a 10-4 edge in shots on frame.

“We play these games over spring break that they schedule and that has a big impact on our guys being prepared,” Ridgeline head coach Dale Buchanan said. “Whether we’re practicing or not practicing, playing over a spring break is difficult, and our guys were not prepared to come out. We have a responsibility as a coaching staff to make sure that they’re prepared, but at the end of the day it’s about performance, and Green Canyon came to play today and we did not.”

Garvert came through with a pair of superb diving saves relatively early in the second half — the first on another Torres to Chavez connection — but Green Canyon’s persistent in the attack finally paid off in the 63rd minute. An Ornelas cross found Ethan Cox, whose one-time effort from about 12 yards out was on the money.

“I felt like we deserved (an insurance goal), for sure,” Rasmussen said. “I’m glad it fell to Ethan. You know, he’s been working hard and it was a good finish, good composure. ... When we’re playing at our high level, yeah it’s fun to watch.”

Meanwhile, the Riverhawks had three good looks in the attack in the second half, but thumped two of them well over the crossbar and booted a free kick inches outside the 18-yard box off the Green Canyon wall.

“We had opportunities,” Buchanan said. “We didn’t have a lot, but we’ve talked all season about finishing the opportunities when you’re presented with one, and we just have to get better at closing the door on those (chances).”

It was the sixth shutout of the season for Von Nedierhausern and company, and it was another strong performance from Green Canyon’s center back pairing of Jace Blotter and Alan Cordova.

Zane Allen buried a free kick and assisted on Ethan Tarr’s game-winning goal for the Mustangs, who took a 2-1 lead into the half. Gabe Newman netted Mountain Crest’s second goal, and it was assisted by Oliver Thompson.

“We struggled to finish,” MC head coach Justin Beus said. “We had 15 shots inside the 6-(yard box). At the end of the day, we were able to get the job done.”

Sidon Abai scored on a rebound for the Grizzlies (2-7, 1-3), and Andy Martinez converted on a penalty kick that was “earned by him,” Logan head coach Natalie Norris said.

“We played so good,” Norris said.

Meanwhile, Caleb Miller scored the only goal Sky View would need midway through the opening half. The Bobcats then found the back of the net three times within a 20-minute stretch of the second half to bury the Bears.

Cole Thedell converted on a pair of second-half shots for Sky View, which also got a goal from Caden Penrose. Isaac Larson, Tate Thurston and Zander Woodward were credited with assists for the Bobcats, who bounced back from their first Region 11 loss — a 1-0 setback to Ridgeline last Friday.

Cordell Ludlow recorded his third clean sheet of the season in goal for the Bobcats.

"The game went very well according to the game plan we set up," SV head coach Jorge Cruz said. "I used my whole team and we allowed players who normally don't get many minutes the opportunity to play, and I was very happy with the performance of those players."

Preston’s five-game winning streak came to an end on the road against undefeated Malad. The Dragons (9-0) pushed across five runs in the home half of the fifth to pull away for a 8-2 win.

Malad finished with 10 hits to Preston’s nine, but the Dragons only stranded one base runner to the Indians’ 10. Karson Chugg and Davon Inglet scored on a Tate Greene single in the top of the second for Preston.

Trevyn Hadley contributed with two base knocks for the Indians, while seven other players chipped in with one.