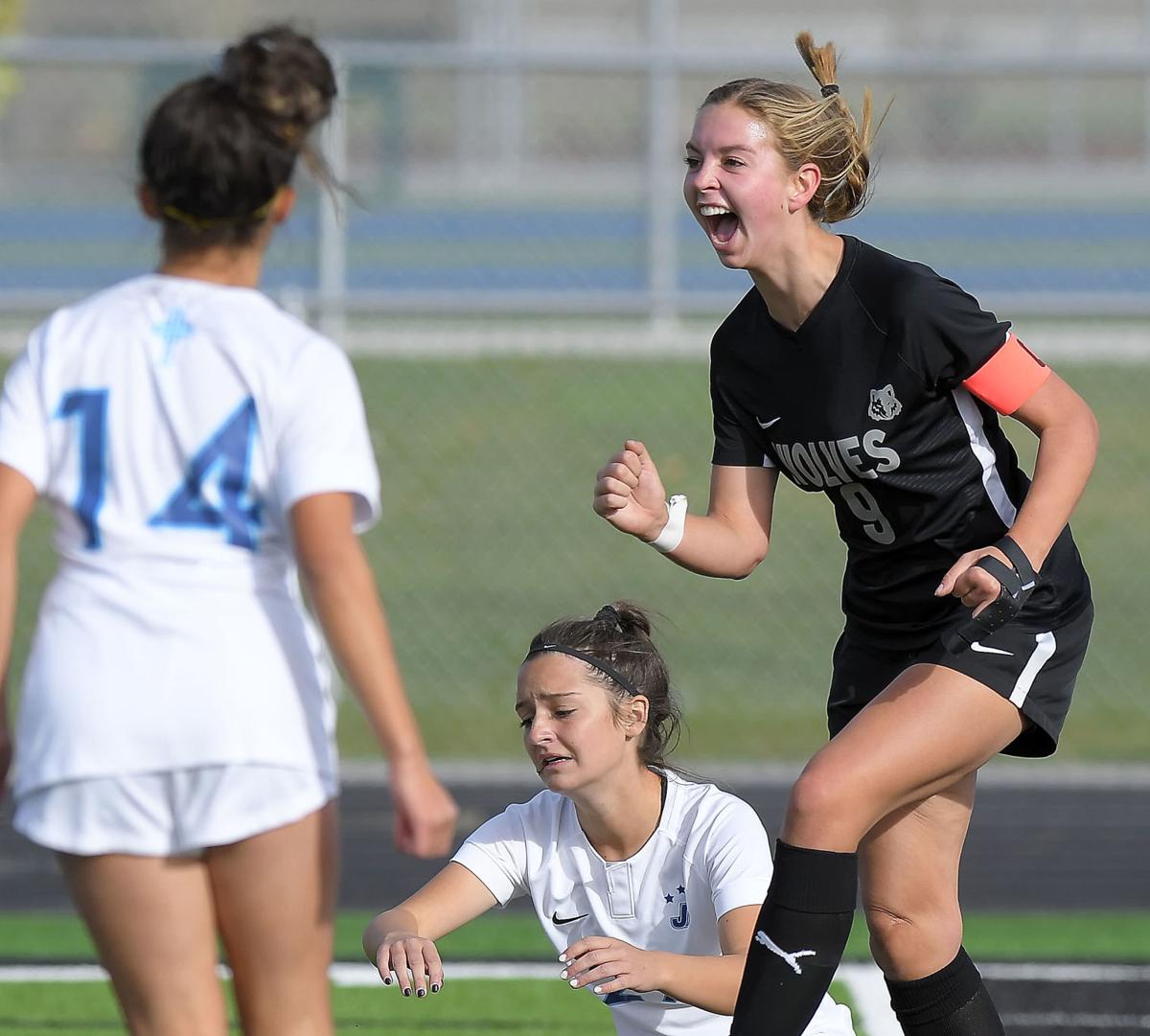 Juan Diego’s Janessa Young Flores (14) and Olivia Harbison react after Green Canyon’s Talia Winder (9) scored a goal in the first half on Wednesday in North Logan. 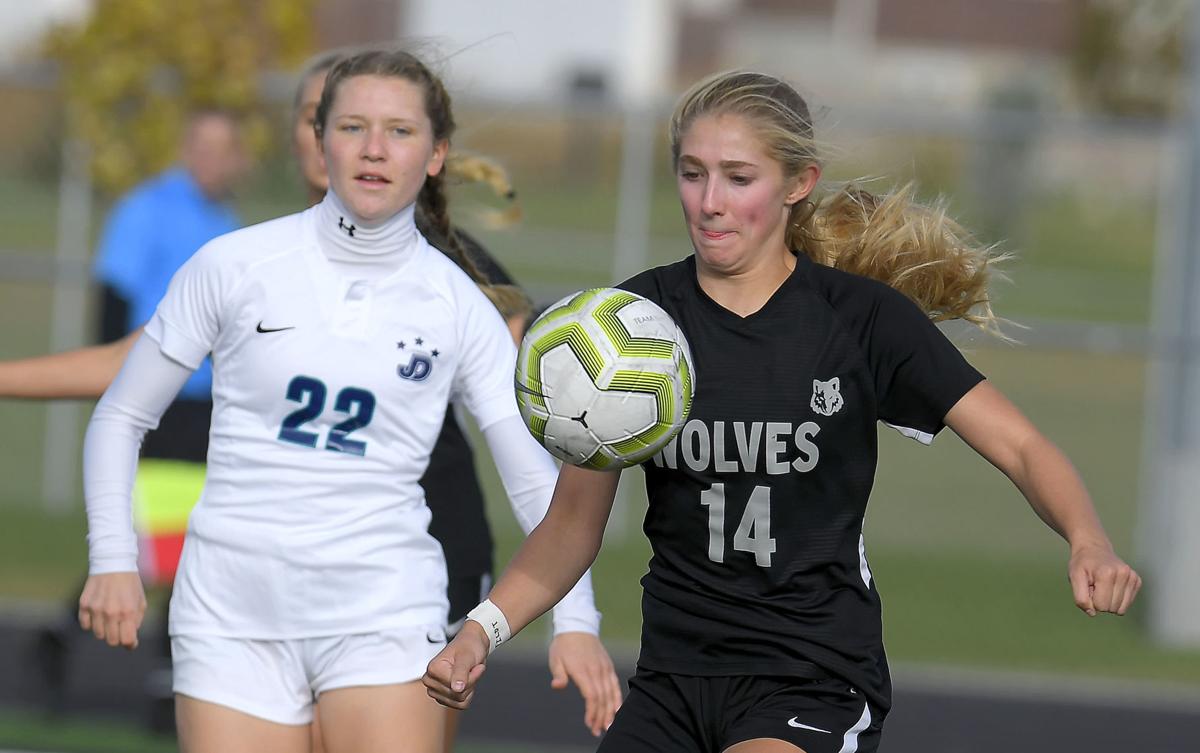 Juan Diego’s Janessa Young Flores (14) and Olivia Harbison react after Green Canyon’s Talia Winder (9) scored a goal in the first half on Wednesday in North Logan.

NORTH LOGAN — Back-to-back loses to close out the regular season were frustrating, the Wolves weren’t about to let that derail their state title aspirations.

Green Canyon’s girls soccer team put together a complete performance in a 4-1 victory over Juan Diego in the second round of the 4A state tournament on a windy Wednesday afternoon. The second-seeded Wolves (12-4) scored a pair of goals in each half to coast into the quarterfinals, where they will host 10th-seeded Pine View on Saturday at 1 p.m.

“I was extremely proud of our girls from front to back, sticking with a game plan, working the game plan,” GC head coach Sven Rasmussen said. “We made a tactical adjustment, we scored after the tactical adjustment, and things were just awesome today. That extra effort and the competitiveness from everybody to find that extra pass (was awesome). It was one of the best games I think we’ve had.”

All four of Green Canyon’s goals were well earned and were carved out courtesy of some great build-up play. The Wolves set the tone in the early going by attacking the flanks and stretching out Juan Diego’s backline.

“We really focused on building out wide and finding our midfield, and I think we’ve done a better job lately as we’ve been practicing of finding each other’s feet and really just working as a team, one-two touches and finding those opportunities, and they’ll come as we keep playing for each other,” GC senior Kaizley Holbrook said.

The Wolves used a stiff tailwind to completely dominate the 15th-seeded Soaring Eagle (9-10) in the run of play in the opening half. Case in point: Green Canyon outshot Juan Diego 11-0 and put nine of those shots on frame.

A rocket of a shot by Claire Campbell set up the first goal. Juan Diego’s goalkeeper made a nice diving save, but the rebound went to Holbrook, who alertly laid a pass back to Talia Winder for an easy finish in the 18th minute.

The Wolves struck again three minutes later on a beautiful 30-yard top shelf strike by Corey Thompson. It was a welcome sight for a talented Green Canyon side that didn’t score in its previous two matches.

“It just felt great, especially where we’ve had a couple losses in a row, just to be able to come back together as a team after a bunch of hard practices and finally put a few (shots) in the back of the net, it felt really amazing,” said Thompson, whose team had several other legitimate scoring chances in the first half.

To their credit, the Soaring Eagle looked much sharper in the attack in the second half. Having the wind at their backs certainly helped as they took seven shots and four corner kicks after halftime. Green Canyon standout keeper Brooke Watkins was called on to make a couple of saves, including a diving stop to her right.

Nevertheless, the Wolves still did a superb job of finding feet and stringing passes together. It paid off 16 minutes into the second half when Hannah Sadler played a well-weighted ball out wide to Ryley Thompson, who finished from about 10 yards out.

Kira Rhay converted on a penalty kick for Juan Diego in the 66th minute, but Green Canyon bounced back four minutes later on Ryley Thompson’s second goal of the game. The senior tracked down a lovely through ball from Holbrook to complete her brace.

Not only was it a good day for Green Canyon, Ridgeline, Mountain Crest and Sky View also advanced to the round of eight. Simply put, teams from Region 11 pushed each other throughout the regular season, and that week-in-and-week-out grind has paid dividends so far in the playoffs.

“I think it really highlights the level of girls that we have in our valley,” Rasmussen said. “Yeah, it’s not a surprise to me that all of the teams have been doing well. Yes, it’s competitive, but that competition actually helps us when we get to the playoffs. ... Every region game is kind of like a playoff game and it helps us prepare.”

The Riverhawks dented the scoreboard four times in a 19-minute stretch of the first half en route to their seventh straight win. Oakley Rasmussen netted a trio of goals and assisted on two others for Ridgeline, which also got a goal and two assists from fellow future Division I player Tenzi Knowles.

Halle Miller and Caitlyn Parry also found the back of the net for the Riverhawks, with Parry burying a penalty kick in the 70th minute. Cedar scored eight minutes later to avoid being shut out.

“We had some very good build-up play from our midfielders and some clinical finishing,” RHS head coach Mark Tureson said. “Adeline Fiefia had some good distribution to the runners today. Oakley and Tenzi made life very difficult for Cedar to contain our offense.”

Up next for Ridgeline is Mountain Crest. The two rivals split their regular season series, with each side prevailing at home.

Hannah Schwab scored off a Keiera Nielson kick free in the first half for the Mustangs, and Baylie Baldwin netted an insurance goal after halftime by finishing an end line pass from Nielson. Jade Harris went the distance in goal for Mountain Crest, which earned its fourth clean sheet of the 2020 campaign.

“Our team played really well today,” MC head coach Amber Hyatt said. “I complimented them after the game, saying that I truly thought everyone that went into the game played well. Traveling is always tough, so I was happy to see us play well. I thought we played a great second half, which we struggled with the last couple games.”

Meanwhile, Sky View continues to shine in shootouts as it improved to 3-0 this season. The Bobcats have only missed one shot from the penalty spot in those shootouts.

Macy Hellstern headed in a Kortnee Lamb corner kick to give the Bobcats a 1-0 lead. The Aviators equalized to pull even at 1-1 at the half. Both teams went scoreless in the second half and both overtime periods.

Amalia Fonua, Hellstern, Laney Gibbons and Hannah Womack buried their shots from the penalty spot for Sky View, while Cedar Valley misfired on two of its attempts.

“So proud of these girls,” SV head coach Jillian Carver said. “They fought with their hearts. It was a battle, as all state games tend to be. We played well and look forward to another battle on Saturday.”

Sky View will now square off against defending state champion and top-seeded Ogden.