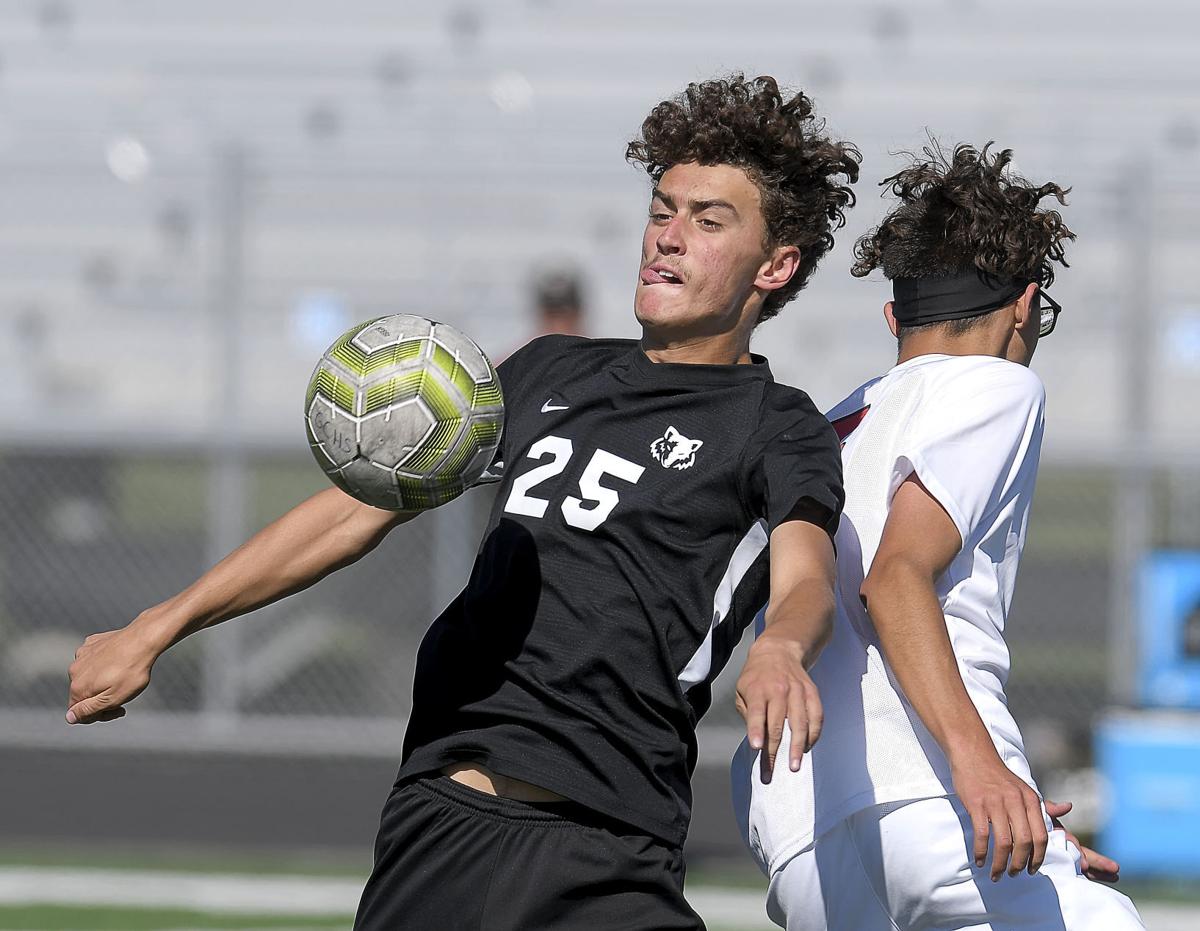 Green Canyon’s Ben Taylor (25) controls the ball against Uintah on Wednesday in North Logan. The Wolves won, 8-0, to advance in the state playoffs. 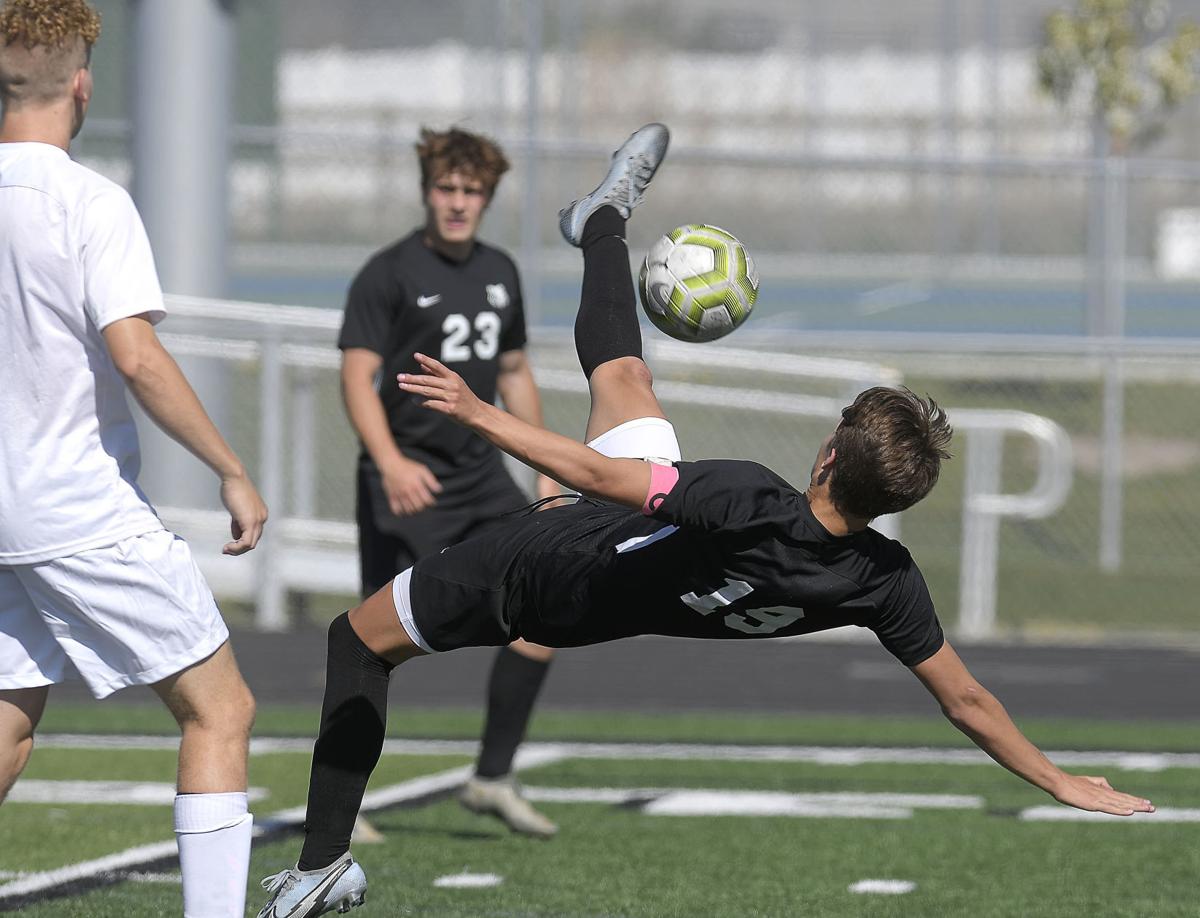 Green Canyon’s Porter Cragun kicks the ball against Uintah on Wednesday in North Logan. Cragun had three goals and an assist.

Green Canyon’s Ben Taylor (25) controls the ball against Uintah on Wednesday in North Logan. The Wolves won, 8-0, to advance in the state playoffs.

Green Canyon’s Porter Cragun kicks the ball against Uintah on Wednesday in North Logan. Cragun had three goals and an assist.

NORTH LOGAN — In the first half of Green Canyon’s state playoff opener Wednesday afternoon, senior attacker Porter Cragun flipped backward in the air to attempt a bicycle kick, missed the ball and landed flat on his back. But unrelenting, he got up and managed to get the ball into the net.

“I just popped up, and it was right there so I got another touch on it and luckily it went in,” Cragun said.

It was that type of game for No. 2 seeded Green Canyon against Uintah in the 4A boy’s soccer second-round matchup. The Wolves’ togetherness and individual ability were superior to that of the visitors from Vernal, which gave them ample first and second chance opportunities to score. It resulted in an emphatic 8-0 victory and a ticket to the quarterfinals to face Region 11 foe Mountain Crest next week.

Green Canyon (14-3) finished the game with 34 shots — 17 of which were on target — opposed to just a single shot from the Utes. Fluid with their passing and quick to terminate Ute possessions, the Wolves dominated the pace and flow throughout the game.

“All year long it’s about confidence in what we do and trust in each other and I think today you saw that,” GC head coach Sven Rasmussen said. “I think that we spread the ball around well and this is what we’re capable of. At the end of the day, all that really matters is to win, the goals are always nice, but it was a big deal for us to win today.”

Cragun, who finished with an impressive three goals and an assist, was quick to credit the team chemistry as a recipe for their success.

“I think we’re close as a team and I think it’s been built over the past three to four years that we’ve played together,” Cragun said. “I think we’ve gotten things down and the team is finally clicking.”

Green Canyon certainly was clicking and proved it throughout the game. Through-balls from the midfielders to the attackers, give and goes, back-heeled passes, set pieces and dribbling to create passing lanes were all savvy ways the Wolves set up easy looks.

Another asset was the Wolves defensive effort. The entire team prevented the Utes from going on runs — which helped Green Canyon keep things on the attack.

“We have a very team defensive-oriented group,” Rasmussen said. “It helps that our goalie and backline are good, but it also helps that we got other guys in front of them that are defending well. It really limits what our defense has to do when they have a hard time getting through our front line and midfield.”

Uintah hung around early on in the first half, as two good looks from Green Canyon seniors John Whitby and Roli Gallart were blocked by Ute goalie Macort Pickup, and things were knotted at zero for the first 17 minutes.

But utilizing their third corner of the game, the Wolves broke through. With 23 minutes left in the half, Whitby crossed it into Cragun, who then skipped it into Ethan Cox, who knocked it into the net. That opening goal proved to be their first off of a corner kick this season, according to Rasmussen.

“(It’s) something we kind of called the boys out on that we haven’t scored on a set-piece, specifically a corner yet this season, so we changed up what we did a little bit and the results happened,” the coach said/

Five minutes later, Jovan Torres got the rebound on a shot blocked by Pickup and poked it over the goal line to make it 2-0. Then Porter scored with nine minutes and 35 seconds remaining to extend it to 4-0.

Four minutes into the second half, Gallart’s had a nice touch into Whitby to make it 5-0. Moments later, Michael Bingham kicked it to Ben Taylor, who scored from 10 feet out to make it 6-0.

With 18 minutes left to play, Cragun received the ball back from Angel Torres off of a give-and-go and launched into the net from 10 yards away. Whitby would cap things off for Green Canyon with a last-minute goal to cap things off.

The Wolves now turn their attention to next week’s quarterfinal game against the Mustangs.

“I’m feeling ready,” Cragun said. “I feel like this team can make a good run and I’m excited for (Mountain Crest).”